An 86-year-old male was noted to have left lower extremity swelling after an uneventful left hip surgery performed for a fracture after a fall down a stairwell two months prior. His other medical co-morbidities include hypertension, gastroesophageal reflux disease (GERD), and hyperlipidemia. He denied shortness of breath, prior leg swelling, pain at rest, or foot discoloration.

The physical exam was remarkable for regular cardiac rhythm and palpable bilateral femoral, popliteal, and pedal pulses. Notably, the left popliteal pulse was very prominent, with a visible pulsatile mass in the left popliteal fossa. Lower extremity edema 1+ was noted from the patient’s left ankle to his knee. The patient was neurologically intact at the time of presentation.

The differential diagnosis based on the patient’s history and physical exam findings included:

Left lower extremity arterial duplex US revealed a partially thrombosed 4.5 cm by 4.5 cm popliteal artery aneurysm (top left). CT angiogram of the left lower extremity was performed to assess his anatomy further to help with a treatment plan. This revealed a 3.7 cm by 4.8 cm by 7.8 cm partially thrombosed popliteal artery aneurysm with intact flow through the tibial arteries (top right).[1][2]

The diagnosis was a large, partially thrombosed, popliteal artery aneurysm with venous compression.[3]

Risk and benefits of observation versus open bypass with interposition graft repair versus endovascular stent-graft repair were considered. The decision was made to perform surgical intervention using open bypass repair.[4][5]

After a full assessment, under general anesthesia, the popliteal artery was repaired by an open surgical posterior approach with an interposition non-reversed saphenous vein graft from the ipsilateral leg (bottom left). After the aneurysm was exposed, it was noted that one of the paired popliteal veins was chronically thrombosed secondary to compression. Care was taken to avoid injuring the median sural, tibial, and peroneal nerves as they were gently retracted. Once control was first achieved distally, then proximally, the aneurysm was opened along its length, and small collateral branches were ligated. The vein graft was sewn into position proximally, and then the vein valves were cut with a valvulotome. The distal anastomosis was completed with flow restored to the foot (bottom right). Doppler auscultation was performed to confirm triphasic flow below the bypass. Recovery was uneventful. Post-operative arterial duplex US of the repair demonstrated good flow and exclusion of the aneurysm.

Clinically, the focal DVT in one of the paired popliteal veins was felt to be chronic, so post-operative anticoagulation was not initiated.  Before discharge, a follow-up venous duplex ultrasound was performed to confirm the stability of the presumed chronic DVT, and no propagation or acute DVT was identified.

In a low-risk patient, repair of the popliteal artery aneurysm would be preferred because of the risk of acute limb ischemia, most often related to embolization, especially if an aneurysm is found to be greater than 2 cm. Indications for repair include embolization, compression, and thrombosis with limb ischemia. The gold standard is surgical repair with decompression of the aneurysm and alleviation of the venous compression.

Two open surgical approaches are possible. A medial approach includes bypassing the aneurysm from above to below the knee using either autogenous vein graft or prosthetic graft following ligation of the aneurysm above and below. The medial approach is the traditional approach, recommended in cases with acutely thrombosed popliteal aneurysms, with evidence of distal thromboembolism or if the popliteal artery aneurysm is not confined within the popliteal fossa and extends both proximally and distally. The other approach, used in this case, is a posterior approach through a serpentine incision at the popliteal fossa with an interposition graft for repair and decompression of the aneurysm, which provides the added benefit of removing extrinsic pressure from the deep veins. Also, ligation of branches feeding the aneurysm would prevent further growth of the sac.

Endovascular stent-graft repair is a minimally invasive option, which can be used if the anatomy is suitable.  This is determined with CT Angiogram measurements to ensure the existence of an adequate purchase of the graft into normal arterial tissue 2 cm above and below the aneurysm sac. This approach is particularly useful for elderly or higher-risk patients and less durable for younger, more active patients. Endovascular stent-graft repair affords the advantage of shorter postoperative hospital stays compared to open surgery. There are, however, disadvantages, including decreased primary patency (the time the revascularized region remains open without reintervention) and the need for reintervention to accomplish similar secondary patency (the time the revascularized region remains patent with intervention after occlusion). Other considerations include lower perioperative morbidity and faster recovery.  This less invasive therapy lacks long-term follow-up, carries the risk of thrombosis with hyperacute knee flexion, and has limited information regarding long-term stent durability.

The diagnosis and management of popliteal artery aneurysms (PAA) require careful clinical acumen combined with diagnostic workup, including duplex ultrasound imaging and, at times, CT Angiography to better define the anatomy and determine the need for and options for repair. Multiple specialties collaborate to obtain the best patient outcomes, including emergency room physicians, primary care, internal medicine, radiology, and vascular surgery specialists. It is important that these aneurysms are diagnosed early and are not allowed to enlarge because of the risk of thrombosis and limb loss. It has been suggested that repair of larger aneurysms, performed either via open or endovascular approach, have poorer bypass patency rates when compared to smaller lesions.[6] Furthermore, certain risk factors such as a PAA measuring >20mm in diameter, presence of luminal thrombus, or atrial fibrillation may demonstrate greater diameter expansion and more rapid enlargement. A shorter interval of ultrasound interrogation should be considered if these factors are present.[7]

Acceptable options for repair include open repair via a medial or posterior approach with bypass or interposition and endovascular repair. The decision of which approach for repair will be pursued is dictated by the anatomy of the aneurysm, the surgeon's preference, and patient factors. One meta-analysis of PAA repair reviewing papers comparing outcomes of posterior repair vs. medial repair suggests the superiority of the posterior approach for primary and secondary patency, aneurysm exclusion, and reduced need for reoperation. High-level evidence from randomized clinical trials is needed and would better define the relative benefits of the posterior approach over the medial approach in selected patients.[8] Long-term follow-up is now available for endovascular management of PAA is available and suggests acceptable long-term patency rates. Stent fracture may occur in up to one-third of patients and should be monitored by the vascular specialist.[9] After repair, lifelong follow-up is necessary to monitor the patency of all three approaches. Clinical awareness of this problem and multidisciplinary management can help identify it earlier, allowing for the best patient treatment and outcomes. 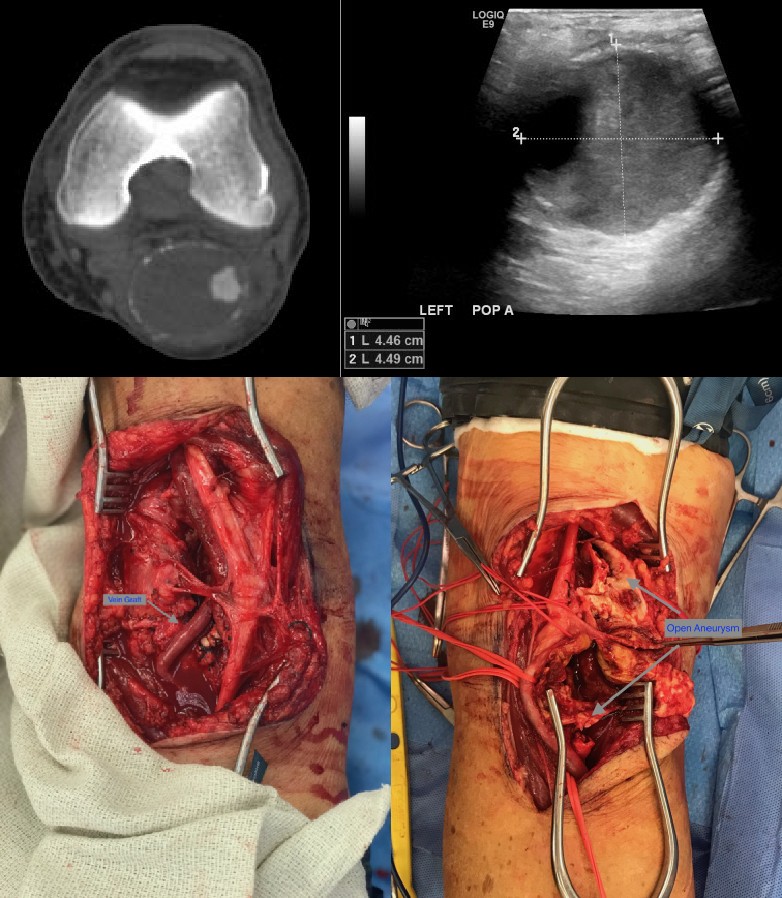