A 24-year-old white male with no known medical history presented to the hospital with chief complaints of 2 weeks of progressively worsening pain and swelling of his right wrist and left ankle joints. He did not report any fevers, chills, night sweats, weight loss or rash. He was employed as a fireman. He denied alcohol use disorder, smoking cigarettes, or any recreational drugs. Family history was significant for hypertension in father and ovarian cancer in the mother. His vital signs were within normal limits on presentation. On physical examination, the patient had significant swelling of multiple joints including the right wrist, right elbow, and left ankle. The joints were erythematous and tender to touch. Due to severe pain, he had limited range in the involved joints.

Initial laboratory workup for the swollen joints included a complete blood count which revealed an elevated white blood cell count (WBC) of 14000/microliter with neutrophil predominance, ESR of 118 mm per hour, and CRP of 8 mg/dL. A comprehensive metabolic panel was within normal limits. Infectious workup, which included blood and urine cultures, was negative. Immunological workup revealed elevated ANA titer (1:320), positive lupus anticoagulant, and high dsDNA antibodies. Ultrasound of the right elbow and left ankle joints revealed effusion in the joints and the surrounding soft tissue swelling. MRI of the right wrist revealed heterogeneous signal and enhancement of multiple carpal bones involving the second through fifth metacarpals, subcutaneous and deep soft tissue of the wrist and proximal hand. Based on the clinical and laboratory evidence, the patient was diagnosed with systemic lupus erythematosus (SLE) by the rheumatologist and was started on steroids, Plaquenil, and methotrexate. The patient’s clinical condition initially improved with the regimen, but his symptoms relapsed when weaning the steroids. He was discharged on a slow tapering dose of prednisone.

The differential diagnosis for a young male (before fourth decade) with polyarthralgia is more inclined towards rheumatologic conditions like SLE, sarcoid arthritis, scleroderma, or gout. If associated with signs and symptoms of infection, gonococcal joint infection is high on the differential. Rheumatoid arthritis and polymyalgia rheumatica usually affect the older population (after the fourth decade). Based on the distribution of the joints, duration of symptoms, and association with other organ systems the classification of polyarthralgia is very broad and makes for a very challenging diagnosis. The most common differentials for a patient presenting with polyarthralgia are Rheumatoid arthritis, Lupus, Lyme, Septic arthritis, Gonorrheal joint arthritis, or Gout.

During a follow-up appointment a few weeks later, he complained of multiple subcutaneous nodules. On physical exam, multiple, tender, non-erythematous subcutaneous nodules were noted along with a palpable, non-tender mass on the left side of the abdomen. CT abdomen showed a large heterogeneous mass measuring 20.1 by 10.7 by 18.1 cm, in the left quadrant of the abdomen along with a poorly defined low attenuation mass measuring 2.9 by 3 cm in the right hepatic lobe. CT guided biopsy of the left-sided abdominal mass was non-diagnostic. He underwent exploratory laparotomy, with excision of the left-sided abdominal mass along with splenectomy and distal pancreatectomy. There were multiple abnormal areas in the liver concerning for metastases. Pathology of the resected mass revealed sheets of malignant acinar cells with no intervening ductal structures or islets. Tumor cells were positive for trypsin and cytokeratin and were negative for CD117 and synaptophysin, consistent with pancreatic acinar cell carcinoma. Serum CA 19-9 levels were high. Lipase levels were elevated at 40,000U/dL. At this point, based on the biopsy and staging, the patient was diagnosed with stage IV pancreatic acinar cell carcinoma, but the cause of his polyarthralgia was still uncertain. Adjuvant chemotherapy was initiated with leucovorin, 5-fluorouracil (5-FU) and oxaliplatin for the carcinoma. During his treatment, his joint swelling and pain progressed and involved new joints of right ankle and left knee. Imaging studies of the joints showed joint effusion and soft tissue swelling. Arthrocentesis of the right ankle joint was performed, and the synovial fluid studies were consistent with infection and cultures were positive for methicillin-resistant Staphylococcus aureus (MRSA) and Pseudomonas. He was treated with antibiotics including vancomycin and piperacillin–tazobactam without any improvement. Due to progressive worsening of the right ankle joint, he required irrigation and debridement with arthrotomy. Repeat cultures were negative, but his symptoms continued to worsen, and he had persistent drainage of milky colored fluid from the surgical site and eventually required a below-knee amputation. Surgical pathology of the right knee joint revealed acute on chronic inflammation with the presence of granulation and fibrin tissue, without any evidence of malignancy. For further evaluation, arthrocentesis of left knee, left ankle, and right wrist was done and yielded milky colored fluid. His lipase levels continued to remain above 20,000 U/dL despite being treated with chemotherapy.

The persistent drainage of milky colored fluid from all the involved joints led to diagnosing the cause of polyarthralgia in this patient. Based on the diagnosis of metastatic acinar cell pancreatic carcinoma, evidence of elevated lipase levels, subcutaneous nodules, and the arthrocentesis yielding milky colored fluid, the patient’s polyarthralgia were believed to be due to hyperlipasemia, a rare paraneoplastic manifestation of pancreatic acinar cell carcinoma. The painful subcutaneous lesions are caused by an inflammatory process known as panniculitis which has been studied to be associated with polyarthralgia in a patient with pancreatic acinar cell carcinoma. Pancreatic polyarthritis and panniculitis are hypothesized to be caused by the peripheral lipolytic activity of lipase circulating systemically due to the pancreatic disease.[1][2]

Acinar cell carcinomas fall into the category of malignant epithelial neoplasms with an incidence of about 1% to 2% of the pancreatic neoplasms. The usual presentation of these tumors is solid, but they can also present either as cystic lesions or mixed with both solid and cystic components. They can present at any age but are often seen in older patients (sixth decade) and predominant in males than in females. Most patients present with vague symptoms such as abdominal pain, weight loss, fatigue or nausea. They are characterized by the production of zymogen granules containing pancreatic exocrine enzymes, in the tumor cells. A consequence of this is a rare paraneoplastic syndrome called hyperlipasemia or lipase hypersecretion syndrome. Serum lipase levels in such cases are usually above 10,000 U/dl and can result in multiple subcutaneous fat nodules and necrosis, termed as pancreatic panniculitis and polyarthralgia due to effusions and sclerotic lesions in the bones. This syndrome can be the initial manifestation of the neoplasm and is associated with poor prognosis. Histologically, these neoplasms are characterized by malignant cells with acinar cell differentiation, which stain positive for immunohistochemical stains such as trypsin, chymotrypsin, elastase, or lipase. Zymogen granules can be noted on the ultrastructure examination. KRAS, SMAD4, the mutations commonly associated with ductal adenocarcinomas are not seen in acinar cell carcinomas. Compared to patients with ductal adenocarcinoma, the overall prognosis for patients with acinar cell carcinoma is better. However, the presence of paraneoplastic syndrome association can worsen the prognosis and affect the quality of life as seen in this case.[5]

Hyperlipasemia syndrome is associated with poor prognosis of the acinar cell carcinoma, and the management modalities vary. Surgical resection is often the curative option for cases with local early-stage acinar cell carcinomas. However, often these acinar cell carcinomas are diagnosed in advanced or metastatic stages, and such cases often require adjuvant chemotherapy. Given the presence of APC gene/beta-catenin pathway genetic alterations, as seen in colorectal carcinomas, acinar cell carcinomas are often treated with 5-FU/leucovorin. Other chemotherapeutic agents that can be used include irinotecan,  doxorubicin, erlotinib, gemcitabine, cisplatin, docetaxel, capecitabine, oxaliplatin, sunitinib, and sirolimus. Lowery et al. published a study in 2011 that highlighted the use of combination therapy, to use gemcitabine or 5-FU-based combination chemotherapy along with platinum analogs such as irinotecan in patients with advanced studies validated to have improved chemosensitivity.[6][7][8] 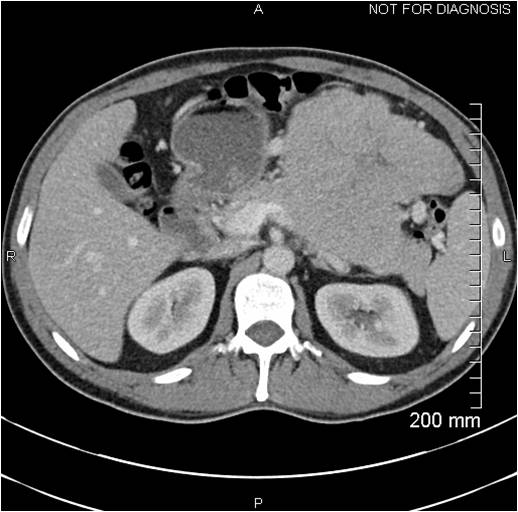