Femoral artery pseudoaneurysm consists of an outpouching of 1 or 2 layers of the vessel wall. A true aneurysm, on the other hand, involves all the 3 layers including the intima, media, and adventitia. Clinically, it may present with pulsatile hematoma, pain, ecchymosis, or with active extravasation. In chronic scenarios, once a fibrous capsule has been formed, it may present with a persistent flow communicating with the arterial lumen. This activity describes the causes, presentation and pathophysiology of femoral aneurysms and highlights the role of the interprofessional team in its management.

A Femoral artery pseudoaneurysm consists of an outpouching of 1 or 2 layers of the vessel wall. A true aneurysm, on the other hand, involves all the 3 layers including the intima, media, and adventitia. Clinically, it may present with pulsatile hematoma, pain, ecchymosis, or with active extravasation. In chronic scenarios, once a fibrous capsule has been formed, it may present with a persistent flow communicating with the arterial lumen. Pseudoaneurysm clinical progression varies; its complications depend on the size, mechanism of injury, duration, patient comorbidities as well as neck diameter. Potential complications include expansion, rupture, embolization, extravasation with arterial wall compression and ischemia. Clinical examination should raise a high index of suspicion once a pulsatile mass can be felt, especially when a patient reports recent intervention.[1][2][3]

The common iliac artery gives off 2 major branches; the internal iliac artery (IAA) provides blood supply to the pelvis while the external iliac artery (EIA) is the main blood supply to the foot. Once it passes the inguinal ligament, EIA then becomes the common femoral artery (CFA). CFA then bifurcates into the profunda artery and superficial femoral artery (SFA). It is important to understand the anatomic landmarks clearly before making an arterial puncture. It is common practice to identify these important landmarks and use sonographic guidance for safe cannulation of the arterial lumen. It is also advisable to make the arterial entry into the CFA at a level where external compression would prevent any hematoma or PSA formation. The ideal entry-level would then be above the femoral head. Hence, draw the anatomic landmarks which consist of the following: a line one fingerbreadth below a line connecting the anterior superior iliac spine (ASIS) with the pubic symphysis and a second line at the inguinal crease. Between these 2 lines, the practitioner should find the common femoral artery overlying the femoral head for easy compressibility. Palpate for a point of maximal impulse, which is the entry point.

Femoral PSA can typically be caused by any form of percutaneous intervention that uses the femoral artery as their entry point. Classically, interventions after cardiac catheterization for coronary stenting have been implicated as the culprit. However, any form of femoral artery cannulation and sheath introduction can potentially cause arterial wall dissection with resultant PSA. Hence, ultrasound-guided cannulation with a Seldinger technique under fluoroscopic guidance becomes of paramount importance in any endovascular intervention. Certain risk factors may contribute to PSA formation, for example, the use of large sheath size, poor technique, patient body habitus, and obesity, need for anticoagulation, female gender, and patient on hemodialysis. It is also implicated that interventions that are performed for therapeutic reasons are associated with a higher number of PSA formation compared to diagnostic ones as the former typically require a larger size sheath.[4][5][6]

True femoral artery aneurysms are very rare and have mostly found in individuals over the age of 65. They are usually unilateral but may be bilateral in 10% of cases. In at least 30% of cases, the true femoral artery aneurysm is associated with an aneurysm elsewhere in the body. Unlike pseudoaneurysms, the risk of rupture is low; however, these aneurysms can form thrombosis and cause limb ischemia.

As mentioned previously, PSAs are the most common complication that results after percutaneous procedures performed by a cardiologist, interventional radiologist, or vascular surgeon. Incidence has been reported from 0.5% to up to 9% in some series. There are other rare causes such as surgical intervention or blunt and penetrating trauma. There are a few case reports which have reported femoral artery PSA due to slipped capital femoral epiphysis treatment. However, percutaneous interventions are the leading cause of PSA formation.[7]

While examining a patient for a femoral PSA, the clinician should perform a full vascular exam of the patient, as well as, a detailed medical history including HTN, smoking, hyperlipidemia, recent vascular interventions, or recent/remote trauma. The examiner should then proceed to perform a comprehensive vascular examination starting with a cardiovascular examination, followed by listening to any bruit in the neck, recording and examining any peripheral pulses in both upper and lower extremities, as well as any investigating for pulsatile abdominal mass. A detailed examination should be tailored to a patient who presents with a pulsatile mass in the groin. A patient at this stage should not be mistaken as having an inguinal hernia as both entities could present with a bulge and pain. A bruit, however, would differentiate between the 2 as it is characteristic of PSA as opposed to an inguinal hernia.

Imaging modalities for PSAs include a duplex ultrasound (DUS) which is usually the first test one should obtain if PSA is suspected. DUS carries a sensitivity of 92% to 96%. Findings on DUS which indicate PSA would consist of a flow called a “to-and-fro flow” between the arterial lumen and femoral artery. Ideally, the DUS will include the dimensions, size of the sac and the neck as treatment will be based on those dimensions. Proximal and distal arteries should also be evaluated for thrombus extruding from the aneurysmal sac. Whenever a surgical intervention is planned, CT angiography can be used for pre-operative planning.[1][8][9]

Surgical repair of PSA is an option when a concomitant arterio-venous fistula exists. It should also be considered when there is ongoing hemodynamic instability, limb ischemia. Surgical principles consist of controlling the artery proximally and distally and primary repair of the arterial defect. When hemorrhagic shock ensues, digital compression of the bleeding site should be performed first followed by vascular control, and primary arteriography. Sometimes a retroperitoneal incision may be required for obtaining external iliac artery exposure in large PSA. If the primary repair cannot be successfully achieved, then a vein graft should be used to reconstruct the arterial system.

Ultrasound compression is utilized to visualize the neck of the PSA and apply pressure until the neck is occluded. While performing compression if a PSA is present, care should be taken to avoid compression of the femoral artery. PSA is treated successfully with ultrasound when the neck is less than 2 cm. Technical failures with this method have been estimated up to 10% to 30%. If this occurs, then alternative treatment should be sought.

Ultrasound thrombin injection is also a minimally invasive procedure that can be performed at the bedside under local anesthesia. To qualify for this treatment modality, the PSA should typically have a long neck that is narrow and easily seen on ultrasound. A spinal needle (22 gauges) is inserted into the sac and under continuous visualization thrombin is injected into the sac. The needle is visualized during the entire procedure to avoid accidental thrombin injection into the arterial system. Approximately 100 to 500 U/ml of thrombin is injected into the sac at about 0.1ml increments until thrombosis is achieved. A technical failure has been reported between 5% to 10% using this method providing neck anatomy is adequate.

Another minimally invasive treatment includes endovascular treatment which could entail both coil embolization or covered stent deployment. Complications include failure of treatment as well as PSA formation since often the contralateral groin is used to gain access.

With any treatment mentioned above, complications include thrombosis of both the venous and arterial systems. Embolization into the distal arterial tree can occur up to 2% to 4% of the cases; hence a thorough pulse examination should be carried prior and after the procedure. If distal embolization is suspected, a Fogarty catheter should be passed both proximally and distally. Once the flow has been restored, the nurse should be asked to palpate the pulses in the feet.

If the patient has a true aneurysm, then repair is not recommended. The aneurysm should be resected and a prosthetic graft should be inserted.

The prognosis for most patients with treatment is good. However, without treatment, the pseudoaneurysm can continue to expand and there is also a risk of rupture. True aneurysms have the potential to induce limb ischemia. In patients who have an invasive procedure at the groin, often there is marked bleeding in the groin which may take months to resolve. Because the blood is in the connective tissue, inserting a drain is futile. It is important to understand that most patients who undergo a percutaneous procedure for heart disease also have other co-morbidities. Thus, most of these patients need close monitoring.

Even though true femoral artery aneurysms are rare, pseudoaneurysms of the femoral artery are relatively common on the cardiology floor where patients often undergo cardiac catheterization. The monitoring and management of femoral artery aneurysms is usually done by a nurse. Once a patient returns from a cardiac catheterization lab, the nurse should not only monitor the groin site for bleeding but also assess the pulses in the leg. The groin should be observed for expansion and ecchymosis. Any changes in the groin size or loss of distal pulses should result in an immediate call to the patient's physician. Today, the management of femoral artery aneurysms involved placement of a stent, ultrasound-guided compression or surgery. While surgery is the gold standard, some patients may be too ill to undergo the procedure and may benefit from a less invasive percutaneous procedure. After the procedure, the patient's distal pulses have to be monitored. Some patients may be placed on a heparin drip, and hence the coagulation parameters need to be monitored. Prior to discharge, patients should be urged to lose weight, discontinue smoking, control the blood pressure and diabetes and exercise regularly. Close communication between the team members is essential in order to improve outcomes. [12][13][14](Level V)

The majority of patients with a femoral artery aneurysm have a good outcome, provided they lower the risk factors for peripheral vascular disease. Unfortunately, for those who do not change the lifestyle, the peripheral vascular disease is progressive and often leads to limited exercise endurance and ischemic changes in the limbs. For those who throw an emboli distally, some people do end up with toe amputations. [1][15](Level V) 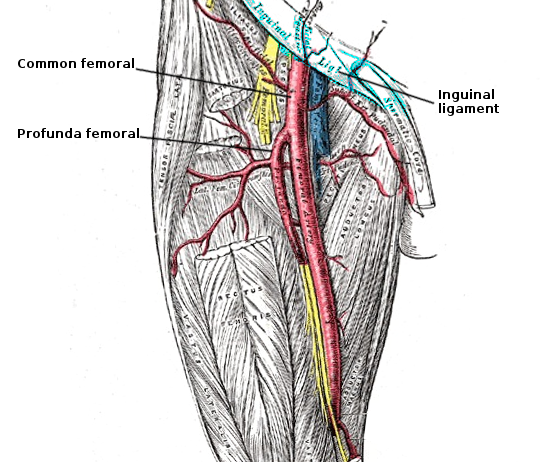 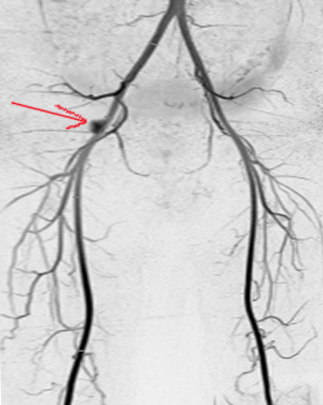