School refusal describes a regular refusal to attend school or routine problems staying at school. Children may avoid school to cope with stress or fear for a vast number of reasons. School refusal is considered a symptom and may be associated with diagnoses such as social anxiety disorder, generalized anxiety disorder, specific phobias, major depression, oppositional defiant disorder, post-traumatic stress disorder, and adjustment disorder, among others. This activity reviews the causes of school refusal, its evaluation, and management options. This activity illustrates the role of interprofessional team members in managing school refusal.

School refusal is not a Diagnostic and Statistical Manual of Mental Disorders (DSM–5) diagnosis. It is described as a symptom that can be associated with several other diagnoses, for example, social anxiety disorder, generalized anxiety disorder, specific phobia, major depression, oppositional defiant disorder, post-traumatic stress disorder, adjustment disorder, among others. School refusal describes the disorder of a child who refuses to go to school on a regular basis or has problems staying in school. Children may avoid school to cope with stress or fear for a vast number of reasons. Management options include cognitive behavior therapy, educational-support therapy, pharmacotherapy, and parent-teacher interventions. Providers may also consider psychoeducational support for the child and parents. Monitoring medications, referral for a consultation to more intensive psychotherapy are important as well.[1][2]

School refusal is a challenge for children, families, and school personnel. Failing to attend school has significant short and long-term effects on children's social, emotional, and educational development. It is important to identify problems early and provide interventions to prevent further difficulties. A collaborative approach is required for the assessment and management of school refusal which includes the provider, parents, school staff, and other mental health professionals. Many children often present with physical symptoms, evaluation by a physician is important to rule out any underlying medical problems. Children with school refusal are often scared to go to school, scared enough that they will not leave the house.[2][3]

It is difficult to determine the number of children that experience school refusal. A common statistic cited by organizations that advocate for increased mental health awareness suggests school refusal affects 2% to 5% of all school-age children. If the child has been home for a while, for example during summer vacation, another holiday break, or a brief illness, it may trigger the problem. A stressful event like the death of a pet or relative or moving to a new house may also precipitate the condition. When a child does not want to go to school often says they are sick. When they wake up in the morning, they complain of having a headache, stomachache, or a sore throat. If someone allows them to stay home, the “illness” might go away, but it comes back the next morning before school. Some children may have crying spells or temper tantrums.[3][4]

Fear of going to school was first called "school phobia" in 1941. Approximately 2% to 5% of all school-aged children experience school refusal. The incidence is similar between boys and girls. Although school refusal occurs at all ages, it is more common in children ages 5 to 6 and 10 to 11 years of age. The longer a child is out of school, the harder it is to return. No socioeconomic differences have been noted.[4]

Refusal to attend school was not a stand-alone clinical entity, but instead, it can be a manifestation of an underlying affective or behavioral disorder defined in the DSM-5. Apprehensive school refusal and truancy are symptoms, rather than distinct diagnoses.[4][5]

It is difficult to determine how many students miss school due to anxiety because many parents cover for their kids. Parents call the school to say that their child is sick, especially parents whose child's symptom of anxiety manifests physically in the form of a headache or stomach pain. Stressful events may lead to school refusal. Some children head to school in the morning and become anxious as they get closer to school; then they cannot proceed. Other children refuse to go to school at all. Their presenting symptoms include fearfulness, panic symptoms, crying episodes, temper tantrums, threats of self-harm, and somatic symptoms that present in the morning and improve when the child stays home.[4][5]

Stressful life events like moving or starting a new school, among others may trigger School Refusal. Other reasons include the child’s fear a parent being harmed once they are in school or fear that they may not do well in school, or they may be afraid of another student.[3]

A range of empirically supported exposure-based treatment options is available in the management of school refusal. Treatments include cognitive behavior therapy, educational-support therapy, pharmacotherapy, and sometimes parent-teacher interventions. Providers may provide psychoeducational support for the child and parents, monitor medications, and help with a referral to more intensive psychotherapy. A younger child may display minor symptoms of fear, anxiety, and depression and may work directly with parents, the school personnel may help the child get over their fears, and there may not be a need for other intervention. Child therapy with parents and school staff may be indicated if the child's difficulties include comorbid psychiatric diagnosis, prolonged school absence, or deficits in social skills. Behavior treatments include relaxation training, systematic desensitization (that is graded exposure to the school environment), emotive imagery, social skills training, and contingency management. Cognitive behavior therapy (CBT) is a very structured strategy where a therapist offers specific instructions for children to enable and gradually increase their exposure to the school environment. In CBT, children are encouraged to confront their fears, and they are taught how to modify negative thoughts.

The provider may choose to focus on a psychologist who practices CBT. CBT provides solutions to current problems and provides tools to change unhelpful thoughts and behaviors. The treating physician may also consider a therapist who is trained in exposure-response therapy (ERP). ERP focuses on gradual exposures to anxiety-inducing stimuli and situations. It is usually performed in the most anxiety-producing situations so that the individual can confidently proceed in the therapy. Dialectical behavior therapy (DBT) is also effective in treating anxiety and school refusal. It is based on 4 skill modules which include 2 sets of acceptance-oriented skills (mindfulness and distress tolerance) and 2 sets of change-oriented skills (emotion regulation and interpersonal effectiveness). Treatment addresses comorbid psychiatric problems, family dysfunction, and other contributing problems. If a child who refuses to go to school has presented with physical symptoms, the physician should explain that signs of physical illnesses are the manifestation of psychological distress rather than a physical illness. A collaborative team approach with multimodal facilities which include the physician, child, parents, school staff, and other mental health professionals should be applied. Physicians should avoid writing a non-judicial excuse note for children to stay out of school unless a medical condition makes it mandatory for them to stay home.

Selective serotonin reuptake inhibitors (SSRIs) have replaced tricyclic antidepressants as the first-line pharmacologic treatment for anxiety disorders in children. Although there are few controlled, double-blind studies of SSRI use in children; the data suggest that SSRIs are effective and safe in the treatment of childhood anxiety disorders. Clinically, SSRIs are used frequently used to treat school refusal. Sertraline can be started at an initial dose of 12.5 to 25 mg per day for a minimum of 7 days and titrated up to 50 mg per day in increments of 12.5 mg (child) or 25 to 50 mg (adolescent) per week. If adequate clinical response is not seen after 6 to 8 weeks of treatment, subsequent trials should be tried following dose increases of 12.5 mg per day for children and 25 to 50 mg per day for adolescents to a maximum of 200 mg per day.

Missing significant periods of schooling can lead to maturational delays, both cognitively, psychologically, and socially. Additionally, if school refusal is not simply an isolated symptom but rather a feature of a constellation of a more serious illness, more serious sequelae can ensue.

School refusal is not an emotional disorder but can be a symptom of an anxiety disorder. Assessment and management of school refusal often require a synergistic approach includes the health care provider, parents, school staff, and other mental health professionals.[4]

The goal is to get the child to school and to teach parents, school employees, and health care providers to facilitate this.

School refusal is a challenge for children, families, and school personnel. Failing to attend school has significant short and long-term effects on children's social, emotional, and educational development. It is important to identify problems early and provide interventions to prevent further difficulties. A collaborative approach is required for the assessment and management of school refusal which includes the provider, parents, school staffs and other mental health professional. Many children often present with physical symptoms, evaluation by a physician is important to rule out any underlying medical problems. Children with school refusal are often scared to go to school, scared enough that they will not leave the house.[2][3] The outcome of the disease is fair if it is treated early. The treatment goal for children with school refusal should be a timely return to school. 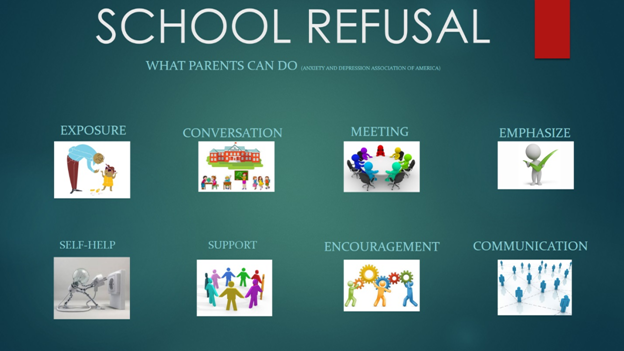