Basilar invagination is an abnormality at the craniovertebral junction, either congenital or degenerative, resulting in the odontoid prolapsing into the already limited space of the foramen magnum. While frequently seen in rheumatoid arthritis, it more commonly presents in a myriad of congenital conditions (i.e., Chiari malformation, syringomyelia, Klippel-Feil syndrome, and hydrocephalus). Clinical presentations can range from chronic headaches, limited neck motion, and acute neurologic deterioration. This activity outlines the evaluation, management, and reviews upon the latest anatomical basis pertaining to basilar invaginations pathogenesis as well as addresses the paradigm shift pertaining to its surgical management.

Basilar invagination is an abnormality at the craniovertebral junction, either congenital or degenerative, resulting in the odontoid prolapsing into the already limited space of the foramen magnum. While frequently seen in rheumatoid arthritis, it more commonly presents in a myriad of congenital conditions (i.e., Chiari malformation, syringomyelia, Klippel-Feil syndrome, and hydrocephalus). Clinical presentations can range from chronic headaches, limited neck motion, and acute neurologic deterioration. Both CT and MRI are critical to the diagnosis and management of this condition, including operative planning when needed. Determining the need for operative intervention is controversial in asymptomatic patients, but those at risk of neurologic compromise could require preoperative cervical traction, and posterior-anterior decompression and fusion.[1][2][3][4]

Compared to the skeletal development of other regions of the spine, the cervical spine has more pronounced changes from birth to skeletal maturity. While some defects may appear static, changes in the cervical spine are more likely to become symptomatic and even life-threatening.[5][6][7]

The most common adult craniocervical junction malformations include Chiari malformations and basilar invagination.  Basilar invagination is a condition where the floor of the skull at the foramen magnum has developed in such a way that the superior aspect of the cervical spine is more cephalad (and often posterior) and in effect has created a narrowing at the foramen magnum opening. This area is at risk of odontoid prolapse along with the decrease in surface area that places the patient at an increased risk for neurologic injury or disruption of cerebrospinal fluid flow. This condition can be a result of a congenital defect or develop secondary to advanced degeneration, as seen in 20% of patients with rheumatoid arthritis.

This condition is similar to a basilar impression, which is softening of the bone at the foramen magnum, and platybasia, which is flattening of the base of the skull. It is believed that basilar invagination is the result of a hypoplastic effect of normal bone tissue, as seen in achondroplasia, basioccipital (clivus) hypoplasia, atlas hypoplasia, occipital condyle hypoplasia, or atlantooccipital assimilation in the presence of spread lateral masses of C1 with just a partially formed C1 ring.

Interestingly, the most common developmental abnormality at this site is atlantooccipital assimilation or occipitalization of the atlas, which frequently is noted in many other congenital anomalies. If present, this deformity at the atlantooccipital junction results in limited cervical mobility and C1 and C2 instability in 50% of patients. Basilar invagination can be a result of a congenital defect or develop secondary to advanced degeneration, as seen in 20% of patients with rheumatoid arthritis.

The basilar impression can be divided into two types: primary, which is the congenital defect that is frequently associated with syndromes and other vertebral abnormalities, and secondary, which is attributed to development issues resulting in softening of the bone tissue at this site and frequently presenting later in life. It is speculated that this secondary basilar impression is due to recurrent microfractures from repetitive axial loads. Supporting this theory is intraoperative findings of proliferative callus at the base of the skull in patients with osteogenesis imperfect (OI). One study showed that about 25% of such patients had this defect. Even if treated secondary, basilar invagination potentially has devastating sequelae in osteogenesis imperfect patients and other osteochondrodysplasias such as Hajdu-Cheney syndrome.

Of note, platybasia is merely an anthropology term to describe flattening of the base of the skull. While it can be closely associated with basilar invagination and basilar impression, in isolation, it is asymptomatic and essentially is a misused term when used to describe congenital defects.

The most recent theory behind basilar invagination is the atlantoaxial facet joint instability, thereby predisposing to upward migration of the odontoid peg through the foramen magnum resulting in brainstem compression as well as crowding of the posterior fossa.[8]

There is a wide array of presentations for basilar invagination/impression, with many of them being a direct result of the syndrome it may be associated with, such as a Chiari malformation, which is suboccipital at a rate of 33% to 38%. The degree of cephalad migration of the dens-atlas-clivus weightlifting determines the neurologic sequelae as this creates significant crowding at the foramen magnum as well as at the medulla oblongata. Also, this crowding could obstruct cerebrospinal fluid (CSF) flow leading to syringomyelia. In the event of medullary dysfunction, a patient may exhibit ataxia, dysmetria, nystagmus, dysphagia, or cranial nerve palsies.

Interestingly there have been well-documented associations between exertional cough headaches (almost exclusively at the occipital or suboccipital, not migraine in a pattern) and basilar invagination. In a study of 97 patients evaluated for a cough, exertional, or sexual headaches, advanced imaging noted an intracranial defect in 45% cases, and up to 80% of the secondary cough headaches were associated with Chiari I. The authors of that study recommended that every patient with a cough headache should have a craniocervical MRI. In addition to coughing, these headaches can be brought on by laughing, weight lifting, or head postural changes. Other sometimes more apparent findings, while not exclusive to basilar invagination/impression, is a short neck (reported in 78% cases) and asymmetric face/skull or torticollis (reported in 68% cases).

One of the frequent causes of the secondary-type basilar impression is rheumatoid arthritis. The basilar impression as a result of rheumatoid arthritis was originally termed “cranial settling” when Mathews and others interpreted odontoid migration to be a result of cranial descent due to eroded lateral atlantal masses. Approximately 8% of rheumatoid patients demonstrate these changes. These changes may lead to sudden death as a result of instability and require surgical fixation.

Historically, the diagnosis of basilar impression would rely on lateral cervical spine radiographs and various named lines such as Chamberlain line, McGregor line, or McRae line. The Chamberlain line was initially described as from the dorsal lip of foramen magnum (opisthion) to the posterior portion of the hard palate. The superior tip of odontoid usually does not exceed beyond this line; extension beyond 5 mm is typically considered abnormal. However, it may be normal for the odontoid tip to be up to 6.6 mm above the Chamberlain line.[9][10]

As the posterior edge of the foramen magnum could not always be visualized, McGregor described a modification of the Chamberlain line from the posterior portion of the hard palate to the lowest edge of the midline occipital surface. The odontoid may normally be higher than if the Chamberlain line was used. Lastly, the McRae line delineates the foramen magnum from anterior margin to the posterior border, for which the odontoid tip should not cross.

Radiographs remain an important screening tool in the evaluation of basilar invagination. However, the interpretation of radiographs of the cervical spine is frequently challenging, and the surgeon should readily employ additional modalities such as cineradiography, myelography, dynamic computed tomography scans, magnetic resonance imaging, and arteriography. More specifically, MRI is needed for the assessment of soft tissues, including neural components.

Criteria for the treatment of basilar invagination has not been well described, and treatment preoperative the neurological status of the patient. For patients who present with neurologic deficits, surgical intervention may be required to attempt to alleviate symptoms and to prevent the progression of neurologic disturbances. For the few patients without any neurological disturbances, clinical and radiological a preoperative traction for progression of the disease has been described as a reasonable alternative to operative stabilization.[11][12]

Surgical stabilization may involve a posterior-only decompression and fusion, or an anterior decompression with posterior stabilization. The determination of approach is usually a result of the reducibility of the basilar invagination. Given the importance of reducibility in surgical approach, preoperative traction is a valuable tool in determining the degree of reducibility and assessment of neurological status  In a case series of surgically treated patients with basilar invagination performed by Goel et al., 82 patients without any associated Chiari malformation were placed in cervical traction, and 82% of these patients noted rapid clinical improvement after application of traction.

Ultimately, the approach should be made on a case by case basis after a thorough evaluation of clinical findings, plain cervical radiographs, and MRI findings.

A recent study has validated the role of atlanto-axial facetal distraction with fusion posterior only for group A variant, whereas only suboccipital and foramen magnum decompression without need for duroplasty in group B variant, even in the presence of syringomyelia.[13]

While surgery can improve some neurological symptoms, complete recovery is not always possible. Residual neurological deficits are common and in some cases, may be disabling.

Basilar invagination is infrequently found in isolation and poses significant treatment challenges. Before any treatments specific for the invagination, practitioners should screen for other associated conditions and try to avoid compromising potential surgical treatment for the invagination. Advancements in diagnostic techniques have assisted with the management of this condition. Patients with reducible invaginations potentially can avoid a combined anterior and posterior approach, requiring only posterior decompression and stabilization. The most appropriate surgical approach and fixation choices will likely remain controversial until high-level randomized trials can elucidate the most effective treatment course.

Basilar invagination is a rare neurological disorder that may be found in isolation and poses significant treatment challenges. Because of the complexity in management, it is best managed by an interprofessional team that includes a neurologist, neurosurgeon, ICU nurses, therapists, and a radiologist. Before any treatments specific for the invagination, practitioners should screen for other associated conditions and try to avoid compromising potential surgical treatment for the invagination. Advancements in diagnostic techniques have assisted with the management of this condition. Patients with reducible invaginations potentially can avoid a combined anterior and posterior approach, requiring only posterior decompression and stabilization. The most appropriate surgical approach and fixation choices will likely remain controversial until high-level randomized trials can elucidate the most effective treatment course.

Irrespective of the type of surgery, some rehabilitation is required in most patients. Besides the physical therapist, the speech and occupation therapist may be required to regain function of the muscles. The social worker should be involved to ensure that the patient's home environment is safe, and there are support systems available. A neurology nurse should follow the patient to ensure that the patient is not worsening. Open communication between the team is vital to improve outcomes. 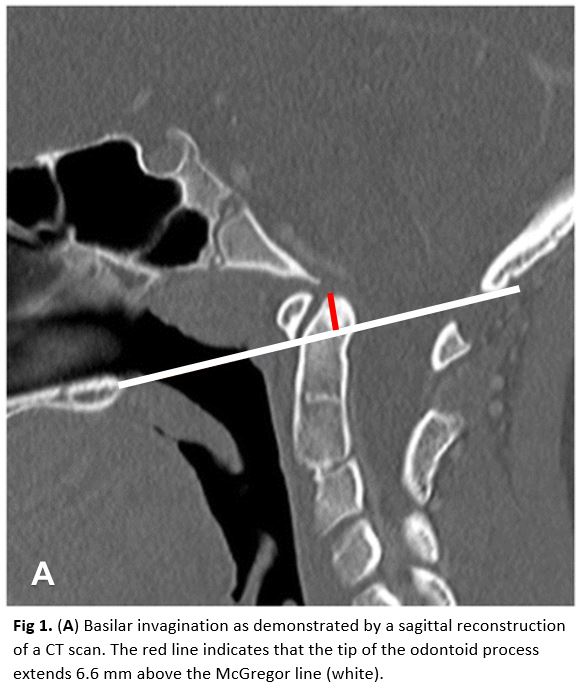 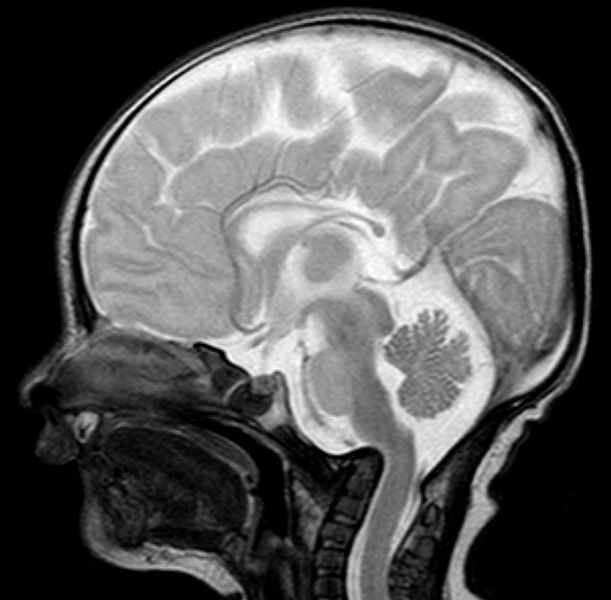 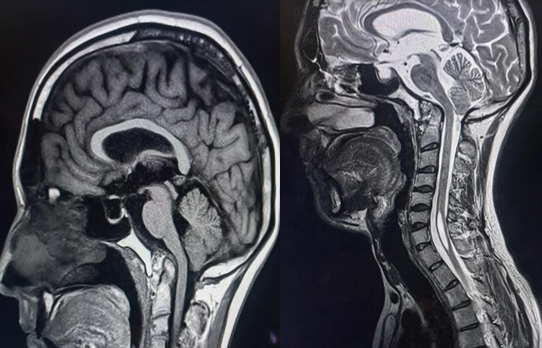 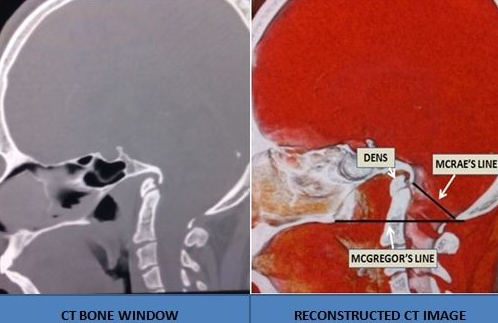