Subungual melanoma is a distinct subtype of cutaneous malignant melanoma arising from structures within the nail apparatus. The word subungual is derived from the Latin "sub" meaning beneath and "unguis," meaning nail or claw. It is ordinarily a variant of acral lentiginous melanoma, a malignant melanoma originating on palms and soles. This activity seeks to give an up-to-date and accurate review of subungual melanoma and its interprofessional team management.

Subungual melanoma is a distinct subtype of cutaneous malignant melanoma arising from structures within the nail apparatus. The word subungual is derived from the Latin "sub" meaning beneath and "unguis," meaning nail or claw. It is ordinarily a variant of acral lentiginous melanoma, a malignant melanoma originating on palms and soles. Boyer originally recognized it in 1834. Hutchinson went on to describe the features in greater detail in 1886, offering a more accurate view of the condition. He described a very specific sign strongly associated with subungual melanoma where the pigment extends beyond the nail and into the adjacent skin ("Hutchinson sign"). This article seeks to give an up-to-date and accurate review of subungual melanoma and its management.[1][2][3]

Subungual melanomas are rare and account for 0.7% to 3.5% of all malignant melanomas worldwide. Melanoma of the nail apparatus occurs equally in all racial groups. However, it is the most common variant of malignant melanoma of African-Americans, Asians, and Hispanics. It accounts for 75% of melanomas in African populations, 25% in Chinese populations, and 10% in Japanese populations. These groups usually have a very low incidence of cutaneous malignant melanoma due to the melanin pigment protecting their skin from ultraviolet (UV) radiation from the sun. It is most common in the seventh decade of life for men and the sixth for women. The great toe and thumb are the most common digits affected. These digits account for 75% to 90% of cases.[5][6]

Subungual melanoma occurs because there is increased melanin production by the melanocytes. When activated, the melanocytes differentiate into matrix cells and migrate distally.

The histopathological process of subungual melanoma is unique due to the involvement of the nail unit. The pathology demonstrates an increased number of melanocytes in the basal layer of the specimen. This layer contains pleomorphic melanocytes with irregularly shaped nuclei. Invasive nail melanoma will show a high melanocyte count, two to three times that of benign melanonychia. The other features include multinucleation, atypia, and extensive pagetoid spread of melanocytes. Inflammation is also present in advanced melanoma but not demonstrated in benign melanonychia.

The histology is most likely to be consistent with acral lentiginous melanoma (67% of cases), a subtype of melanoma which involves palms and soles. Fifty percent of cases are consistent with superficial spreading, and some cases have features of both. Acral lentiginous melanoma is characterized by acanthosis, elongation of rete ridges, and proliferation of atypical melanocytes in the epidermis. Basal keratinocytes become replaced by malignant melanocytes.

Subungual melanoma presents as brown-black discolorations of the nail bed. It can present as either a streak of pigment or irregular pigmentation. The discoloration can progress to thickening, splitting, or destruction of the nail with pain and inflammation.

Other possible causes of pigmentation to the nail unit need to be considered. The history should include episodes of trauma to consider a subungual hematoma and also infection to consider pigmented fungal nail conditions.

Levit et al. described the ABCDEF guidelines that can be utilized to assess for risk of a pigmented nail lesion being a melanoma. These guidelines are:

A: Age: 50 to 70 years of age and African, Japanese, Chinese, and Native American heritage

B: Brown-black band greater than 3mm with an irregular border

E: Extension of discoloration into the skin surrounding the nail (Hutchinson sign)

The main way to make a diagnosis is with a full-thickness biopsy of the nail bed. A recent study by Reilly et al., published in December 2017, demonstrated that there could be a large disparity between the tumor thickness on initial biopsy versus the final tumor thickness. This point highlights the importance of having a good quality biopsy to make the initial histological assessment followed up with a management plan.

A nail bed biopsy should be performed using a digital nerve block. A tourniquet is useful for hemostasis, but the digit should not be exsanguinated in the presence of malignancy. The nail plate should be carefully removed using a periosteal elevator. Two radial incisions can be made at 45 degrees on either side of the eponychial fold to visualize the germinal matrix. A full-thickness biopsy should then be taken of the pigmented area. Ideally, this should be an excisional biopsy if possible. The defect is then repaired using an absorbable suture, and the nail is replaced in the eponychial fold.

Following the excisional biopsy of the pigmented lesion in the nail bed, a further management plan can be made based on the histological report. The report will detail the subtype of malignant melanoma, the Breslow thickness, and other histological characteristics.[7][8]

The multidisciplinary melanoma team will use this information to determine what further investigations are necessary and which treatment is appropriate. The mainstay of management of melanoma of any kind is excision. The initial excision is a biopsy, which offers a histological report, and guidelines determine the wide local excision margin according to the depth of a tumor. This is the same for subungual melanoma.[3][9][10]

The lymph node basins should be clinically assessed, and those with clinically palpable nodes should be further assessed with imaging and with or without a biopsy and go on to have a lymph node dissection if the disease is detected. According to guidelines, those lesions with a thickness of 1 to 4 mm with no lymphadenopathy should be offered sentinel lymph node biopsies.

Those with tumor thickness greater than 4 mm should be considered for pre-operative staging with a CT-PET and brain MRI scans.

The management is discussed further in the following sections.

The 2 most common misdiagnoses of subungual melanoma are striate melanonychia and onychomycosis. Striate melanonychia is the deposition of melanin in the nail plate and is typically not a solitary pigmented streak. Onychomycosis is a fungal nail infection producing a painless, dystrophic pigment change in the nail. Other differential diagnoses include a subungual hematoma, which is usually a painful lesion that presents following trauma and migrates distally as the nail grows, and a junctional naevus, which is a single benign lesion not in a streaked pattern.

The surgical management of subungual melanoma has been controversial for the last decade. For many years, the only acceptable option for management was digital amputation. In 1965 Das Gupta et al. conducted a study looking at the management of subungual melanoma. The study included 34 patients looking at amputation at the interphalangeal joint versus more proximal amputation. This study reported that all patients who underwent amputation at the interphalangeal joint did not survive for 5 years. Following this, surgeons took the view that these rare cancer cases should undergo aggressive treatment in the form of proximal amputations at the level of carpometacarpal joint or tarsometatarsal joint. This level of amputation can impede the function of the hand or foot affected, especially because the most common digits affected are the thumb and the hallux. The findings of this study are significant; however, the authors did not report the depth of the lesions, and half of the patients had metastatic or recurrent disease at presentation. Therefore, the treatment recommendations are perhaps a little skewed.[11][12][13]

More recently, this aggressive form of treatment has become less acceptable, leading to the investigation of less radical surgical options to preserve length and obtain surgical clearance. Cochran et al. published a literature review in 2014, looking specifically at the management options of subungual melanoma. This review concluded that in situ excision surgery for lower grade melanomas and melanoma is a reasonable option. This translates as excision down to periosteum or paratenon. Other deeper, higher grade melanomas could undergo amputation at a more distal level (interphalangeal joint) than advised by Das Gupta. However, despite the encouraging evidence that surgeons are considering less aggressive options, the quality of the data is weak, with no randomized controlled trials and mostly retrospective data collection. The surgical excision method remains controversial and should be assessed on a case by case basis.

These guidelines should help to determine the excision of subungual melanoma but may need to be adjusted to allow the most functional outcome for the patient.

Radiotherapy has limited use in melanoma and should only be used in specific circumstances. It is reserved for use on the lymph node basin in post-lymphadenectomy in cases where there was bulky lymphadenopathy or extracapsular disease. It is also recommended for the treatment of cerebral metastases.

Immunotherapy is an option that can be discussed with patients with metastatic disease and should be offered by oncologists.

Subungual melanoma is staged using the AJCC staging and classification system. The Tumour Node Metastasis (TNM) staging is used as per other malignant melanomas.

The American Cancer Society has recently published up to date prognostic statistics:

Nail dystrophy can occur after surgery.

A cosmetic deformity is universally seen in all patients.

Those patients who refuse a biopsy should be closely monitored.

Patients need to understand that subungual melanoma is not correlated with sun exposure. Going forward, they should exercise good hand and foot hygiene, which may be of some benefit. They should also inspect their nails and nail beds for signs of recurrence or other new lesion development.

The key points to remember for subungual melanoma are:

Subungual melanoma is most common in non-Caucasians, with both men and women having equal risk. Like other forms of melanoma, subungual melanoma can also spread to other parts of the body and is lethal. The key to diagnosis and early treatment is awareness. All healthcare workers, including nurses, should routinely examine the nails and maintain a high index of suspicion for any pigmented lesion on the nails. The only way to reduce the high mortality is an early referral to a dermatologist for a biopsy. Further, the nurse should educate patients on examining their skin and nails for unusual changes. Finally, both the nurse and the pharmacist should educate the public about using sunscreen when going outdoors and wearing protective clothing when going outdoors. Sunglasses are also recommended as the UV rays of the sun can damage the retinal cells.[14][15] [Level 5] 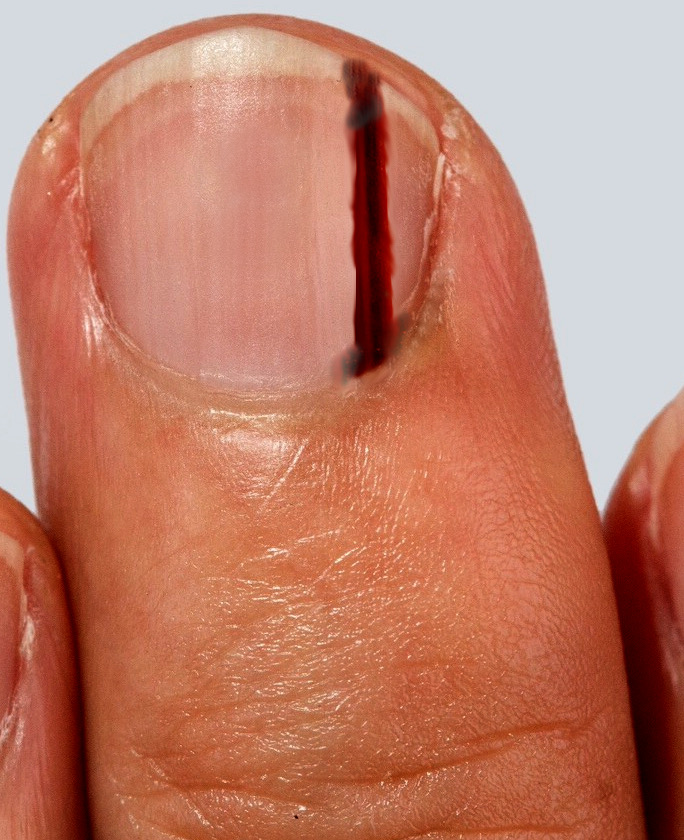