Black Cohosh, or Cimicifuga racemosa, is a perennial dicot of the Buttercup family native to the Eastern half of the United States and Canada. It is also known as baneberry, black snakeroot, bug root, and bugbane. Black cohosh is considered an herbal remedy or dietary supplement. No specific therapeutic claims are made of its efficacy in treating any medical condition. This activity will discuss the purported uses of this substance, potential mechanisms of action, and potential toxicities, so members of the health care team can be aware of the possible issues arising when patients take this herbal supplement.

Black Cohosh, or Cimicifuga racemosa, is a perennial dicot of the Buttercup family native to the Eastern half of the United States and Canada. It is also known as baneberry, black snakeroot, bug root, and bugbane. Preparations of black cohosh are made from the roots and rhizomes.[1] Black cohosh is considered an herbal remedy or dietary supplement. No specific therapeutic claims are made of its efficacy in treating any medical condition. Due to this lack of specific medicinal claims, no premarketing evaluation nor FDA approval is required. Because it falls into the category of "herbal remedy" rather than "medicine," there are no FDA-approved indications for this herb. Black cohosh is most commonly used for the relief of menstrual discomfort and in the relief of menopausal symptoms.[2][3] Other uses of this herb include treating rheumatoid arthritis, musculoskeletal pain, and fever.[3] Efficacy in achieving relief of menopausal symptoms has been published for over 50 years. Studies relating to human physiology have been largely inconclusive.  Studies do not show any consistent effect on the follicle-stimulating hormone, luteinizing hormone, or estrogen.  Studies have shown no consistent effect on tissues of the female reproductive tract. No consistent effect was seen in either a histologic or functional sense. Studies have not found that black cohosh is more effective than a placebo in relieving vasomotor symptoms.[4]

The exact mechanism of action for black cohosh is not known. Some studies suggest that several biologically active substances are responsible for their action. A partial list of active compounds includes the isoflavone formononetin, isoferulic, caffeic, salicylic, and fukinolic acids. There are also miscellaneous fatty acids, tannins, and sugars.  Phytosterin and resins that include Cimicifuga and triterpene glycosides are also present. Most evidence points to several different mechanisms of action. Some researchers have shown evidence that it may exert its effects centrally through alterations in the serotonin pathways. Others have demonstrated its ability to act as an antioxidant or anti-inflammatory. Others still have shown that it works as a selective estrogen receptor modulator similarly to tamoxifen. The only thing that can be said with certainty is that it is not completely understood and appears to have multiple potential mechanisms of action.[5]

There is no standardized dose for black cohosh. A randomized study published in Menopause in 2006 used black cohosh 160 mg/day orally in an ethanolic extract to contain 2.5% triterpene glycosides. This study was continued for 12 months, with no significant side effects reported. Another study published in 2009 used black cohosh at 128 mg/day orally in an ethanolic extract containing 5.7% triterpene glycosides. Again, there were no adverse effects reported. A Cochrane review of studies totaling over 2000 women used formulations from 8 to 160 mg orally daily with a median dose of 40 mg. The studies were 8 to 54 weeks in length. Not all the authors state that they used the rhizome/root for the extract. In many of the studies, extraction of the preparation was not detailed, nor was a standardization of the extract for specific active compounds accomplished. In light of all studies, doses of 160mg daily by mouth do not appear to have any ill effect on the user. Doses of various commercially available supplements vary greatly.[6]

Because the FDA does not directly regulate black cohosh, the actual ingredients may differ from vendor to vendor. Some may be adulterated. Adulterants in any supplement may include pharmaceutical and synthetic analogs. Trace amounts of heavy metals are also known to be present in unregulated supplements.[7] The actual amount of the herb may vary considerably from vendor to vendor, as well as the packaging information. When evaluating the herb for beneficial and adverse effects, this certainly must be taken into consideration. It would be arguable whether it would be difficult to determine whether an adverse effect came from the actual extract or a (un)intended adulteration during the manufacturing process.[8] There are many biologically active compounds in black cohosh.[9]

Adverse effects may not be attributable to merely one chemical compound. In clinical trials using black cohosh to treat menopausal symptoms, it was found that it was associated with a low incidence of adverse effects. Those reported were musculoskeletal complaints, uterine bleeding, and breast pain. Users who have taken large doses most commonly have reported gastrointestinal side effects and rashes. Dizziness, nausea, and vomiting are less common side effects. The US Pharmacopeia has determined that black cohosh may be responsible for more than 30 cases of liver damage. Worldwide, there have been 83 reports of liver damage associated with the use of black cohosh. Elevated liver enzymes, liver failure, and other associated hepatic disorders have been reported. No causal relationship has been established.

The American Herbal Products Association advises against its use by pregnant women except under the direct supervision of a licensed clinician. The US Pharmacopeia advises that those with liver disorders not use the herb.  The Pharmacopeia also states that if symptoms of liver dysfunction occur, use should be stopped immediately, and a clinician should see the patient.  The American College of Obstetricians and Gynecologists states that the data does not show that the use of black cohosh is efficacious in treating menopausal symptoms. The North American Menopause Society echoes this position. Since some compounds in black cohosh have estrogenic activity, it would be prudent to avoid its use when there is a history of breast cancer, endometrial cancer, thromboembolic disorders, undiagnosed vaginal bleeding, endometriosis, and fibroids. Due to reports of liver toxicity, it is not recommended with a history of any liver disorder. The US Pharmacopeia recommended that the product contain the following label: "Discontinue use and consult a healthcare practitioner if you have a liver disorder or develop symptoms of liver trouble, such as abdominal pain, dark urine, or jaundice."

There is no standard protocol for monitoring. Due to the possible estrogenic/hepatotoxic adverse effects, complaints of breast pain/masses or vaginal bleeding should undergo evaluation by an obstetrician or gynecologist. Any evidence of liver dysfunction should immediately be evaluated by liver function tests. In all cases of possible ill-effects caused by this supplement, it should be immediately discontinued.

There is no known antidote, as the exact mechanism of action is not understood and may occur through several mechanisms. Treatment would consist of discontinuation of the dietary supplement, medical evaluation of new symptoms, and supportive measures until normalization occurs.

Black Cohosh is widely used by many women for the treatment of a range of medical disorders, but solid clinical evidence to back up the claims made by the manufacturers is lacking. Thus, the primary care provider (MD, DO, NP, or PA), pharmacist, and nursing staff should educate the patient on the use of black cohosh and other dietary supplements. Patients should be informed that efficacy in achieving relief of menopausal symptoms has been published for over 50 years. But clinical studies relating to human physiology have been largely inconclusive. Studies do not show any consistent effect on the follicle-stimulating hormone, luteinizing hormone, or estrogen. Studies have shown no consistent impact on tissues of the female reproductive tract. As of now, black cohosh has actions similar to placebo.[10][11] While black cohosh supplements are generally safe, the potential for interactions or adverse should not be discounted. When taking a patient's medication history, black cohosh (as well as any other supplements) should be included, so patients will not encounter any medically-related problems. 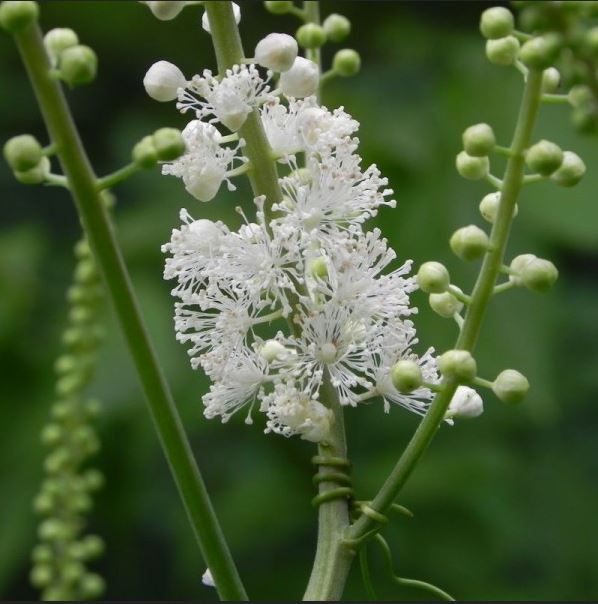