The term "hematocrit (HCT)" originated from English “hemato-“ and Greek “krites.” HCT measures the volume of packed red blood cells (RBC) relative to whole blood. Hence, it is also known and reported as a packed cell volume (PCV). It is a simple test to identify conditions like anemia or polycythemia and also to monitor response to the treatment. A glass tube and a centrifuge machine are sufficient to measure HCT. After centrifugation, the component of blood separates into three distinct parts. From below upwards, the layers are - a layer of red blood cells (RBC), a layer of white blood cells(WBC) and platelets, and a layer of plasma at the top. This method of determining HCT by Wintrobe hematocrit tube is known as the “macro-hematocrit” method.[1]

A Wintrobe tube is a narrow glass tube measuring 110-mm-long, with graduation from 0 to 100 mm in both ascending and descending order.   This method has been succeeded by the “micro-hematocrit” method which uses a small capillary tube instead of a Wintrobe hematocrit tube. It requires less quantity of blood as well as less time requirement for the testing procedure. It is beneficial for patients from whom blood collection is difficult (e.g., pediatric patients/hypovolemia). However, the principle of the test remains the same as the “macro-hematocrit” method. HCT calculation is by dividing the lengths of the packed RBC layer by the length of total cells and plasma. As it is a ratio, it doesn’t have any unit. Multiplying the ratio by 100 gives the accurate value, which is the accepted reporting style for HCT. A normal adult male shows an HCT of 40% to 54% and a female shows 36% to 48%.[2] Though these two methods are still in use in some settings of primary care and medical teachings, they are widely replaced in the majority of settings by an automated analyzer, where HCT reports get generated along with the complete blood count.

For the macro-hematocrit method, venous blood is taken as a random sample (i.e., no special precautions needed) maintaining proper aseptic precautions. The blood is either collected in a commercially available vacutainer containing ethylenediaminetetraacetic acid (EDTA) or in a vial/test tube with EDTA where vacutainer is not available[3]. For the microhematocrit method, the blood requirement is less, and single finger-prick blood is sufficient. Heparin filled capillary tube may is used to collect blood. However, if there is available blood with anticoagulant for other hematologic tests, a capillary tube without heparin can be used. For measurement of HCT in automated hematologic cell counter, blood with anticoagulant used for CBC is necessary.

The macro-hematocrit method uses a Wintrobe hematocrit tube, a centrifuge machine, and a Pasteur pipette. Blood is filled in Wintrobe hematocrit tube up to 100 mm mark by the help of Pasteur pipette. Care is taken not to leave any bubble in the blood column. For this, the tube is filled slowly with the tip of the pipette being always below the highest position of the blood column. Then, the tube gets placed in the centrifuge machine. When testing a single specimen, another blood-filled Wintrobe hematocrit tube is kept on the opposite holder to counterbalance. The spin setting is 3000 rpm for 30 min. After completion of the centrifugation, the tube is taken out, and RBC column height is reported as HCT. During the reporting, special precaution is necessary to omit the buffy coat, which is a combination of WBC and platelets. This layer should not be included in the HCT, as it may lead to false positive results.

For the microhematocrit method, after filling the blood in a capillary tube, the two ends of the tube (commonly 75 mm long, 1 mm diameter) are sealed with clay sealant or heat. Then, it is centrifuged at a rate of 11000 to 12000 rpm for 4 to 5 min. Reading is with the help of the scale on a tube holder or microhematocrit card reader.

The automated analyzer measures the average RBC size and number by the “Coulter principle”[4]. In this method, the size and number of the RBCs is measurable by detecting impedance while the blood passes through a passage between two electrodes.

There are several physiological and pathological conditions where the HCT may deviate from its normal range. New-born babies show a high HCT, and it gradually decreases during the neonatal period[5]. Adult male shows higher HCT than an adult female.[6] Pregnant women show lower HCT due to hemodilution. In high altitude, the number of RBC becomes high due to persistent hypoxia; hence, the inhabitant of high altitude shows higher HCT. Methodological variation may provide a minor deviation of HCT tested for the same sample. In the macro-hematocrit method, there is an increased amount of trapped plasma (approximately 2%) in the packed RBC, which may give a higher HCT. This factor becomes minimized in the microhematocrit method, where the amount of trapped plasma is less as the diameter of the capillary tube is less than that of the Wintrobe hematocrit tube. Blood collected from different sources may also show variation. Venous blood shows higher HCT than arterial blood. However, there is no difference in HCT between venous blood and finger prick blood.[7]

Wintrobe hematocrit tube has graduation 0 to 100 from below upwards. Hence, the highest level of packed RBC is the HCT in percentage. For the microhematocrit method, the reading is from the HCT card or scale. However, for these two methods, even without any graduation or scale, the HCT value can be calculated with a simple scale as we compare the length of the RBC column with the total length of the fluid column. The final report is a percentage. HCT, along with RBC count and hemoglobin (Hb) concentration, is used to report other blood indices manually as follows:

In primary health care settings, especially in resource-limited settings, macro-hematocrit and micro-hematocrit methods are two low-cost and simple tests for determining RBC in blood. Clinically, HCT is used to identify anemia and polycythemia along with other parameters (e.g., RBC count, Hb concentration). In anemia, where there are fewer RBCs in the circulating blood relative to the total volume of the blood, the HCT decreases.[8] In polycythemia, there is a higher number of RBCs in the blood; HCT increases. Smokers and chronic obstructive pulmonary disease (COPD) patients also have high HCT due to chronic hypoxia. The increase in HCT increases the viscosity of the blood, so does the peripheral resistance. Hence, patients with higher HCT may have higher blood pressure.

Handling of blood should take place with the maintenance of proper aseptic precautions. The collected blood should be tested as soon as possible after collection. Prolonged storage at the room temperature would result in a change in the shape of the RBCs due to metabolism. After about 6 hours, the chances of hemolysis increase, which would give an erroneous result. In the macro-hematocrit method, the filing of the Wintrobe hematocrit tube requires proper care. In the microhematocrit method, the sealing of the capillary tube should be secure to prevent any leakage. The centrifuge machine should not be opened during the test to avoid erroneous results. The chances of error in the result will increase if the centrifugation is interrupted. Immediately after completion of the rotation, the operator should not open the lid should until after the complete stoppage of the rotation. For reuse of the Wintrobe hematocrit tube, proper cleaning is necessary as any foreign particle inside the tube would be counted either in the RBC column or plasma column.

After the introduction of the automated hematology cell counters, the usage of macro-hematocrit and microhematocrit method is less used nowadays. However, in many resource-poor settings, it is still used for the diagnosis of anemia and polycythemia and monitoring response to treatment. In a rural healthcare facility, it is a more accurate method for identifying anemia than the total RBC count, as chances of error in manual RBC count is very high. The micro-hematocrit method is more acceptable as it requires less amount of blood, and the testing time is very less in comparison to the macro-hematocrit method. Due to the requirement of less amount of blood and less time for the test, it may be useful in a mass survey. 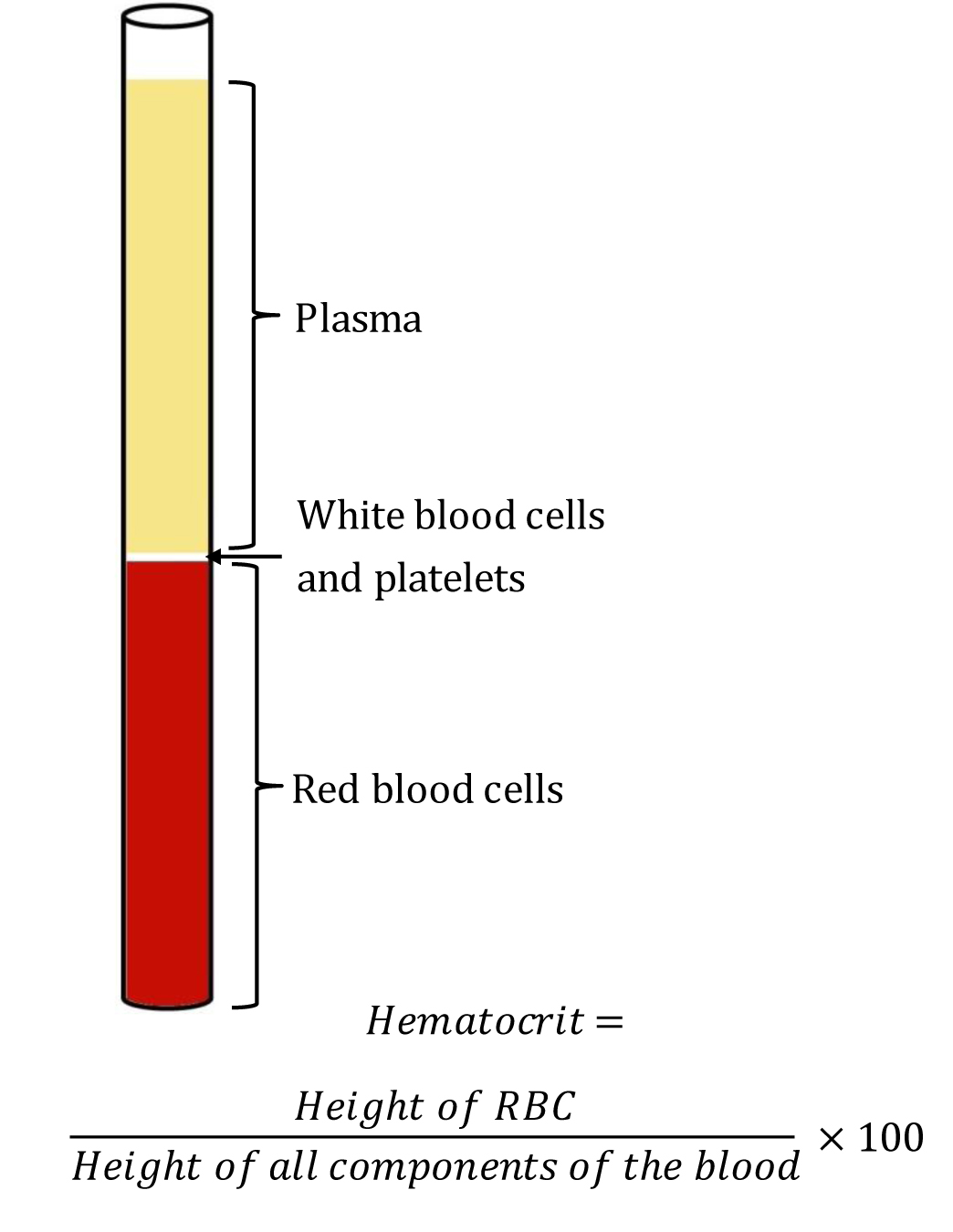 Zeng SM,Yankowitz J,Widness JA,Strauss RG, Etiology of differences in hematocrit between males and females: sequence-based polymorphisms in erythropoietin and its receptor. The journal of gender-specific medicine : JGSM : the official journal of the Partnership for Women's Health at Columbia. 2001     [PubMed PMID: 11324238]