Opioids are often prescribed for cancer-related pain and moderate-to-severe chronic pain, especially pain that is inadequately controlled with non-opioid therapies. Clinicians can improve the lives of patients living with pain by applying knowledge regarding opioid equivalent dosing for opioid-tolerant patients eligible for opioid rotation. This activity reviews the importance of establishing and calculating opioid equivalence between various agents when making a therapeutic switch and the role of the interprofessional team in ensuring therapeutic and analgesic efficacy while simultaneously minimizing adverse events.

Opioids are often prescribed for cancer-related pain and moderate-to-severe chronic pain, especially when inadequately controlled with non-opioid strategies. Although morphine is the prototype opioid agent widely used in critically ill patients, it may not always be the first choice, as with other opioids.[1] Here are some of the clinical settings where certain opioid drugs are preferred over others, as per the FDA recommendations:

Patients receiving mechanical ventilation: Fentanyl, morphine, or hydromorphone are preferred because these opioids are fast-acting and titratable. Remifentanil may occasionally be selected if early extubation is expected as it has an ultrashort duration of action.

Patients who are extubated: In case of moderate-to-severe non-neuropathic pain in critically ill patients who have been extubated, IV fentanyl, morphine, or hydromorphone is preferred as these agents can easily be titrated, and patients can be given the appropriate analgesia without central nervous system depression.

Patients with renal and/or hepatic insufficiency: IV fentanyl or hydromorphone is a better choice, with dose adjustments as needed. Remifentanil may occasionally be considered in patients with severe multiorgan failure because its metabolism is independent of hepatic or renal function.

Patients with hemodynamic instability: Morphine is typically not advised in this case as it causes more histamine release, which could exacerbate hypotension, compared with fentanyl or remifentanil, which are preferred in these patients.

Patients with bronchospasm: Fentanyl or hydromorphone is preferred over morphine as they cause the lesser release of histamine compared to morphine.

Patients requiring frequent neurologic assessments: Remifentanil is preferred because of its ultrashort duration of action.

Patients requiring intermittent bolus opioid doses: Morphine or hydromorphone are preferred, especially when they have to endure a painful procedure because of their longer duration of action than fentanyl.

A transdermal route is possible for fentanyl, where chronic analgesia may be required.

The majority of clinically useful opioid analgesics bind primarily to mu-opioid receptor sites where they have agonist effects. Examples of these mu receptor agonists include morphine, hydromorphone, fentanyl, oxycodone, hydrocodone, and methadone. Because they act on the same receptor, these drugs are theoretically interchangeable, provided the doses are adjusted for relative potency.[2]

Routes for common opioids include intravenous (IV), intramuscular (IM), subcutaneous (SQ), Oral (PO), and transdermal (TD). Intramuscular administration is not recommended for pain management while using the SQ route is limited to circumstances such as lack of IV availability. The most common routes of administration of opioids are PO, IV, and TD. Oral short-acting opioids are dosed 3 to 4 hours apart due to their short half-life. Stable patients on chronic opioid therapy benefit from preventive analgesia and often have regimens that combine a long-acting opioid, dosed 8 to 12 hours apart, and a short-acting opioid, the latter being used as a breakthrough opioid when pain transiently increases in intensity above the pain addressed by the ongoing analgesics. Intravenous opioids are generally dosed for acute pain relief in situations where an oral opioid is ineffective, or the oral route is unavailable. Intravenous opioids are dosed 2 to 3 hours apart or can be dosed as a continuous infusion or as patient-controlled analgesia (PCA).

Adverse effects are common during opioid therapy. In particular, patients on opioids should be monitored for constipation, nausea, vomiting, sedation, impaired psychomotor function, and urinary retention. Among gastrointestinal side effects, opioid-induced constipation (OIC) affects between 45% and 90% of patients and is a source of significant morbidity.[3] It is the most prevalent reason patients avoid or discontinue opioids and can often result in an increased length of hospital stay and overall healthcare costs.[4][3][5][6][7][8] Nausea is seen most commonly at the start of therapy. Patients commonly develop tolerance to the emetic effects so that within 3 to 7 days, at a constant opioid dose, the emetic effects abate. While there is no research on this effect, morphine and codeine are often mentioned as the worst offenders.

Opioids also have neuroexcitatory effects that might not be easily recognized. Myoclonus is typically a herald symptom. Myoclonus, which is the uncontrollable jerking and twitching of muscles/muscle groups, most frequently occurs in the extremities, initially presenting with only an occasional random jerking movement. Myoclonus can present in patients on chronic therapy with most opioids, including hydromorphone, morphine, and fentanyl.  Higher doses more frequently result in myoclonus, but the dose relationship is variable.[9] Myoclonus can occur with all routes of administration. As myoclonus worsens, patients may develop other neuroexcitatory signs: hyperalgesia (increased sensitivity to noxious stimuli), delirium with hallucinations, and eventually grand mal seizures. Treatment usually involves decreasing the opioid dose, opioid rotation, or the addition of a benzodiazepine.

Sedation occurs in 20% to 60% of patients, most commonly when initiating opioid therapy or when doses increase.[10] Mild-to-moderate sedation is usually self-limiting, resolving in a few days. If persistent, it may improve with drug therapy.[11] Moderate-to-severe sedation responds to dose reduction but may also necessitate opioid rotation.

Both pruritus and urinary retention are rare side effects. A combination of topical agents and/or systemic low-dose opioid antagonists is commonly used to treat pruritus. Acute urinary retention needs urgent medical attention; if it is related to the opioid, either the opioid dose can be reduced, or the agent discontinued.

The mu receptor agonists differ in their metabolism, and organ dysfunction can influence their side effect profile.[12] For example, in patients with renal impairment, fentanyl, oxycodone, or methadone are preferred, whereas morphine and hydromorphone are the favored agents for patients with severe liver disease.[13][14]

All patients on chronic opioid therapy regimens require monitoring for continued efficacy as well as an indication for treatment. Monitoring includes a thorough pain assessment that accounts for pain levels, changes in the quality of pain, pain recurrence, and side effects from analgesics. When a decision is made to rotate to a different opioid, there are essential pharmacokinetic principles to consider: equianalgesia and incomplete cross-tolerance.[1]

The term equianalgesia, meaning “approximately equal analgesia,” refers to the doses of various opioid analgesics that are estimated to provide the same pain relief. Equianalgesic dose calculations are a means for selecting the appropriate initial dosing when changing from one opioid agent or route of administration to another. An equianalgesic chart provides a list of analgesic doses, both oral and parenteral, which approximate each other in their ability to provide pain relief (i.e., the equianalgesic units). The equianalgesic chart (Table 1) lists rough estimates; individual patients may vary. Morphine is considered the gold standard; hence all calculations occur in Oral Morphine Equivalents (OME).

Most patients on chronic opioids develop tolerance to analgesic and non-analgesic effects of opioids such that a previously effective dose gradually loses efficacy. This is usually manifested as a shortened duration of action and often requires dose escalation to maintain adequate analgesia. Cross-tolerance is the development of tolerance to the effects of pharmacologically related drugs, particularly those that act on the same receptor site. However, when switching to another opioid, clinicians need to assume that cross-tolerance is incomplete, which means that the starting dose of the new opioid must be reduced by at least 50% of the calculated equianalgesic dose to prevent overdosing.[12]

Naloxone, a semisynthetic opioid antagonist, is indicated for the complete or partial reversal of life-threatening CNS/respiratory depression induced by opioids. Depending on the dose, naloxone administration to a physically dependent patient on opioids will cause an abrupt return of pain and can precipitate abstinence (withdrawal) syndrome, with symptoms ranging from mild anxiety, irritability, and muscle aches to life-threatening tachycardia and hypertension.[15] Newer peripherally acting opioid antagonists, methylnaltrexone, and naloxegol antagonize peripheral mu-opioid receptors and are used to treat refractory opioid-induced constipation.[16]

The following are some examples.

Ms. T is a patient with lung cancer and painful bony metastases who takes extended-release morphine 90 mg every twelve hours and has tolerated it well. She is admitted to the hospital for a planned stabilization procedure of lytic bony metastasis. She is likely to suffer from uncontrolled pain if she doesn’t take her scheduled Morphine doses.

During her hospital stay, Ms. T develops acute renal failure from IV contrast during a procedure. To avoid toxicity from morphine in the setting of renal failure, you decide to switch her to an opioid that can be administered safely in cases of renal insufficiency, such as fentanyl or hydromorphone. On bedside assessment, her pain is well controlled, and she is receiving morphine IV continuous infusion at 2.5 mg per hour.

Towards the end of her hospital stay, Ms. T reports that her pain has been controlled with the IV hydromorphone; however, her renal function has not completely recovered, and she needs to be switched to oral opioids that are safe to use in renal dysfunction.

Optimal patient analgesia is best accomplished through the efforts of an interprofessional healthcare team that includes clinicians, specialists, nursing staff, and pharmacists. When these team members are involved with patients in scenarios such as the above cases, they must be well familiarized with opioid equivalency and monitoring patient pain control. This responsibility falls to the prescribing or ordering clinician, should be double-checked by the pharmacist. If a nurse is administering or counseling the patient on how to take the medication, they should also be trained on opioid equivalence and equianalgesia. This interprofessional approach will minimize opioid misuse and dependence, prevent adverse events, and provide the patient with the needed analgesia for their situation. [Level 5] 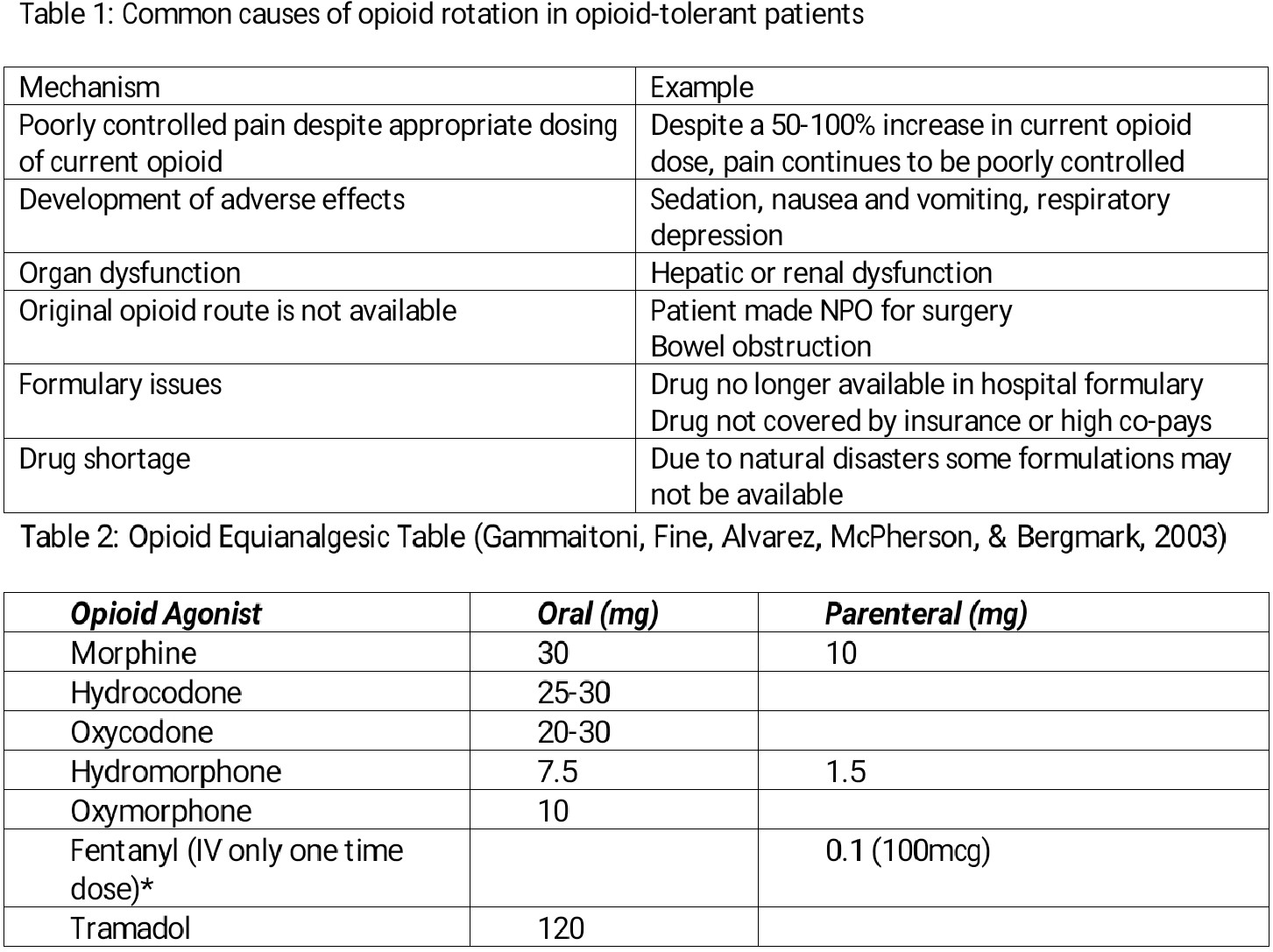 McPherson ML, Why equianalgesic tables are only part of the answer to equianalgesia. Annals of palliative medicine. 2020 Mar;     [PubMed PMID: 32233628]

Choi YS,Billings JA, Opioid antagonists: a review of their role in palliative care, focusing on use in opioid-related constipation. Journal of pain and symptom management. 2002 Jul     [PubMed PMID: 12183097]