All visual perception begins with the conversion of light stimuli into neuronal signals by rod and cone photoreceptor neurons in the retina. Rods are capable of generating signals at very low (scotopic) light levels, while cones are responsible for vision at bright, or photopic, light levels. Both rod and cone photoreceptors maintain membrane depolarization and release excitatory vesicles of glutamate continuously in darkness; light encoding occurs by membrane hyperpolarization and a decrease in the rate of vesicle release. Rods are exquisitely sensitive in darkness, but their release rate decreases to the point of saturation and are unable to signal further increases in light levels even at fairly dim intensities. By contrast, cones are incapable of transmitting weak light stimuli in darkness but adapt over a very broad range of light intensities and can perceive elements of a visual scene even at very high intensities.[1][2] Because photopic vision describes vision in bright light to which rods are unable to contribute, it is synonymous with cone-mediated vision.

Light adaptation principally involves Ca, which acts as a second messenger to effect negative feedback upon light-driven membrane hyperpolarization. This negative feedback helps photoreceptors to avoid response saturation. The difference between the light levels at which rods and cones are capable of signaling arises from the fact that cones forego high sensitivity for much more effective light adaptation and therefore a broader signaling range [3].

Within the retina, cone signals transmit through bipolar cells (BCs) to retinal ganglion cells (RGCs), the neurons that transmit retinal signals to the brain via the optic nerve. Influences from horizontal and amacrine cells shape Cone-to-BC and BC-to-RGC signaling within the retina.[4][5] As a rule, each cone transmits information to over a dozen functional subtypes of cone BCs, and therefore cone signals are relayed to RGCs via many functionally distinct parallel pathways.[6][7][8] Anatomical and physiological interactions among retinal neurons allow cone BCs and RGCs to encode specific features of visual scenes; for example, RGCs may be excited specifically by light increments, decrements, or movement in a particular direction.[9] Signaling within the retina that produces such functional RGC diversity is thought to enhance visual perception. Photopic visual signals travel via RGCs to many targets in the brain and contribute to both image forming and non-image forming vision, the latter of which includes light-mediated regulation of pupillary aperture, circadian cycles, and head-eye movement coordination.[10][11] The majority of RGCs project to the lateral geniculate nucleus (LGN), where they synapse with neurons that project to the visual cortex. This pathway mediates visual perception, and this article will discuss a few of these key features below.

Cones in many species are capable of mediating high-acuity vision. In primates and many hunting species, cones are densely packed in a small area of the retina known as the fovea. At the center of the fovea (the foveola), cones have a “direct line” to the LGN via a 1:1:1 cone to BC to the RGC relationship. By contrast, outside the fovea, photoreceptor synapse onto multiple BCs which in turn synapse onto multiple RGCs, producing a convergence of inputs that reduces visual acuity. Because the fovea lacks rods, high-acuity foveal vision is less sensitive at low light than vision originating outside the fovea, where rods are present.

One of the most important features of photopic vision is color perception. In humans, a cone may contain one of three photopigment proteins: S, M, or L opsin. Each type of opsin absorbs light most efficiently at a specific wavelength (S = short, 415 nm; M = medium, 530 nm; and L = long, 560 nm). As a consequence, colored stimuli are absorbed and propagated slightly differently by the three cone classes. Cone signals are then integrated and compared by retinal neurons to deliver color information to the brain.[12] Because rods contain only a single type of opsin, color vision does not occur at low light levels. In contrast to photopic vision, scotopic vision is, therefore, inherently achromatic.

The intracellular pathways that mediate phototransduction are activated much more transiently in cones than rods. The brief duration of signal transduction provides the physiological basis for the reduced sensitivity and higher temporal fidelity of cones compared to rods.[3] The spatial summation of rod signals through anatomical convergence (discussed above) also degrades the ability of the rod system to signal motion. Indeed, perceptions of moving stimuli mediated by rod pathways are approximately 25% slower than equivalent stimuli signaled via cone pathways.[13][14] The natural transience of phototransduction in cones, therefore, allows for enhanced temporal resolution at photopic light levels.

Disorders of photopic vision typically result from mutations in one of many proteins critical for cone or retinal pigment epithelium function.[15] The most common cone disorder is color blindness, a relatively benign disorder in which a single opsin gene mutation (usually M- or L-opsin, both present on the X chromosome).[15] More severe inherited cone disorders include achromatopsia, in which most or all cones are nonfunctional, cone-only dystrophy, mixed rod-cone dystrophies, and cone dysfunctions with a syndromic cause. Signs of cone dysfunction include color vision abnormalities, reduced visual acuity, photophobia, and nystagmus.[16] The therapeutic approach for patients with these disorders is an interprofessional and depends heavily on the degree of disability. Individuals with simple color blindness may need no assistance, while patients with retinal degeneration may require extensive medical and occupational therapy.[17] Developing visual restoration approaches include gene therapy, regenerative medicine, and visual prosthetics (varying evidence levels from I to V).[18][19]

Trichromatic color vision arises at the level of individual cone photoreceptors (distributed coding). However, these receptors are also interconnected through specific stimulatory and inhibitory pathways, as per the opponent process theory, forming three opposing color pairs- blue/yellow, red/green and black/white. This theory also accounts for the formation of complementary afterimages.

There can be a defect in assessing the correct brightness of specific colors, as seen in conditions like protanopia, deuteranopia, and tritanopia, due to the dysfunction of a single cone subtype.

The inability to distinguish any color without a total loss of cone function is termed monochromacy, and is due to the dysfunction of two cone subtypes.

A total loss of cone function is known as achromatopsia, which manifests as a combined defect in vision in normal light intensity as well as the absence of color discrimination.

Cone defects can be assessed clinically by the use of electroretinography (ERG). Clinicians can use Ishihara plates to perform color vision assessments. 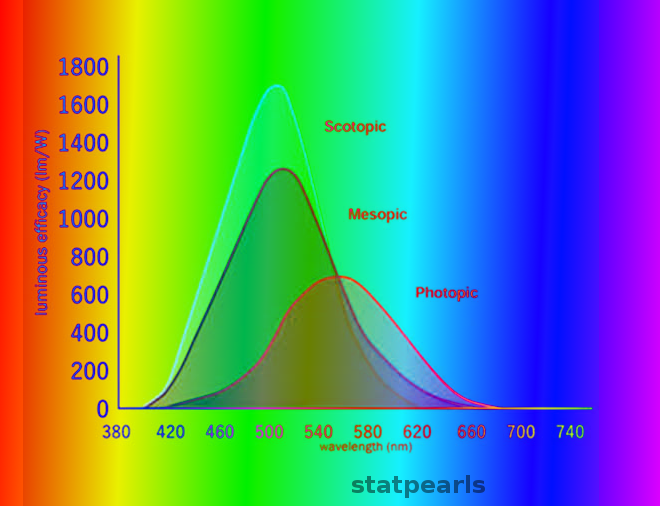 Wässle H,Puller C,Müller F,Haverkamp S, Cone contacts, mosaics, and territories of bipolar cells in the mouse retina. The Journal of neuroscience : the official journal of the Society for Neuroscience. 2009 Jan 7;     [PubMed PMID: 19129389]

Van Essen DC, Behind the optic nerve: an inside view of the primate visual system. Transactions of the American Ophthalmological Society. 1995;     [PubMed PMID: 8719674]