The Bartholin’s glands (or greater vestibular glands) are important organs of the female reproductive system. Danish anatomist Caspar Bartholin Secundus first described them in 1677.[1] Their primary function is the production of a mucoid secretion that aids in vaginal and vulvar lubrication. The glands are located in the vulvar vestibule, at either side of the external orifice of the vagina. They are homologous to the bulbourethral (Cowper’s) glands in males.

Bartholin gland pathology may present as an asymptomatic mass, causing only vulvar asymmetry. Symptomatic masses may exhibit severe tenderness, surrounding erythema, and edema. Cysts and abscesses often form in women of reproductive age and do not require treatment. Rarely, mass biopsy and excision may be necessary if malignancy is suspected.

The primary function of the Bartholin glands is the production of a mucoid secretion that lubricates the distal end of the vagina during intercourse. The glands become active after menarche and are non-palpable. Each gland is oval-shaped and measures, on average, 0.5 cm. A two-centimeter-long efferent duct connects each gland to the posterolateral aspect of the vaginal orifice (between the hymen and the labia minora).[2]

The external pudendal artery provides the blood supply to the Bartholin glands. Both glands drain into the superficial inguinal and pelvic lymph nodes.[2]

A scalpel is used to perform a medial incision into the cyst/abscess after the application of a local anesthetic. The incision should not be performed on the outside of the labium majus due to the risk of fistula formation.[4] A Word catheter (a small, thin rubber tube with an inflatable balloon tip) is placed inside the cyst after removing its contents. The catheter can remain in place for up to four weeks for continuous drainage and re-epithelization of the new outflow tract.

A scalpel is used to perform an elliptical incision in the mucosa of the vulva and the underlying cyst wall. Care should be taken not to incise on the outer margin of the labium majus due to the risk of fistula formation. After draining the contents of the open cavity, the edges of the cyst cavity are sewn to the surrounding skin. This procedure forms a permanent open pocket, and the new outflow tract will shrink over time as it heals.

Excision of a Bartholin cyst or abscess may be required when office-based treatments fail. Possible complications include an increased risk of bleeding, post-surgical infection, pain secondary to scar tissue, and complications from general anesthesia. The surgical removal of Bartholin glands has not been shown to interfere with sexual function.[5] A specialist should perform this procedure.

The surgeon uses a scalpel to perform an elliptical incision in the mucosa of the vulvar. Care is necessary not to incise into the cyst/abscess. Dissection using sharp and blunt methods separates the cyst/abscess from the surrounding structures. At the base of the cyst of the Bartholin gland is identified. The blood supply can be ligated using either cautery or suture. Then the cyst/abscess can be removed entirely. Utilizing a multi-layer closure, the space where the Bartholin cyst/abscess was is closed with interrupted sutures. The mucosal layer is closed with a simple running suture.

Carbon dioxide laser therapy can provide cyst vaporization in the outpatient setting. A study by Fambrini M et al. has concluded that CO2 laser vaporization is a safe and effective way to treat a Bartholin cyst completely.[6] Silver nitrate ablation following cyst drainage was as effective as marsupialization and caused less scar formation in a prospective randomized trial.[7] Procedures such as cyst/abscess fenestration and needle aspiration with or without alcohol sclerotherapy require further clinical research.

Bartholin gland cysts, abscesses, and masses may significantly affect a woman’s life. Pain and swelling can prevent sitting, walking, and intercourse. The diagnosis of Bartholin cysts and abscesses is often clinical. Atypical masses may require further imaging (such as magnetic resonance), tissue biopsy, or complete excision.

Bartholin gland cysts account for approximately 2% of all gynecological visits every year.[8] A cyst may form as a result of efferent duct obstruction, leading to the accumulation of mucous and distension of the gland. Cysts are frequently sterile and unilateral. They present as painless masses usually detected during a routine pelvic examination. Rarely, larger cysts may cause sexual discomfort or vulvar disfiguration.

Asymptomatic cysts in healthy patients may receive conservative treatment.[9] A cyst that ruptures and drains spontaneously may only require hot sitz baths. In some cases, cysts may become enlarged and painful or infected. Treatment options are available for symptom relief as well as cosmetic concerns. Antibiotics may be necessary in the event of secondary infection. Postmenopausal patients may need further investigations to rule out the possibility of cancer.

Bartholin gland abscesses may result from either an infected cyst or a primary gland infection. They typically present with severe pain and swelling, making sitting, walking, and sexual intercourse difficult. Other presenting signs and symptoms may include:

A study by Kessous et al. has described the most common microbial pathogens associated with Bartholin abscesses. Escherichia Coli was the most commonly found pathogen (43.6%), followed by Staphylococcus aureus (6.4%), group B Streptococci (4.8%), and Enterococcus spp (4.8%). Less than 10% of cases were polymicrobial in origin. E. Coli-positive cultures were more common in recurrent infections (56.8%) than in primary infections (37%).[10] Sexually transmitted infections were seldom causative, but testing for chlamydial and gonococcal infection remains important in susceptible patients. Broad-spectrum antibiotic coverage is advisable in the absence of microbial sensitivities.[4]

There are numerous options available for the treatment of symptomatic Bartholin cysts or abscesses. The most common interventions include incision, drainage with Word catheter placement, and abscess marsupialization. A systematic review by BJG Illingworth et al. found that current randomized trial evidence does not support the use of any single surgical method.[11] The outcomes of other interventions, such as rubber ring catheter insertion, cavity closure, and alcohol sclerotherapy, have yet to be sufficiently studied.

Bartholin cysts and abscesses can very rarely lead to complex and poorly understood complications such as a rectovaginal fistula or a recto-Bartholin’s duct fistula.[12]

Primary carcinoma of the Bartholin gland is rare, accounting for 1 to 5 percent of all vulvar malignancies.[15][16] Its incidence is highest in women in their 60’s.[2] Atypical presentations should raise suspicion of a possible carcinoma, and it merits consideration in the differential diagnosis of any enlarging asymptomatic vulvar mass in a postmenopausal woman. Malignant masses may also be fixed to the underlying tissues.

A retrospective cohort study concluded that Bartholin mass excision in postmenopausal women is not justified as a first-line treatment since the incidence of cancer is so low (0.114 per 100,000 woman-years). These patients may benefit from mass drainage and selective biopsy.[17]

A retrospective cohort study found the incidence of Bartholin gland abscesses to be low (0.13%) during pregnancy. There was no significant difference in pathogens found in culture-positive samples of pregnant and non-pregnant women.[19] 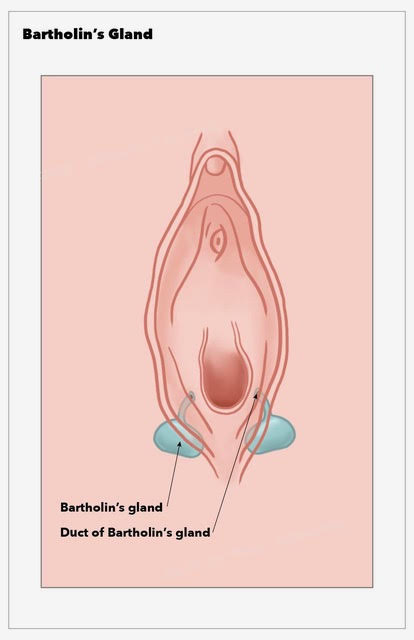