Descending tracts are responsible for relaying information from cortical regions to the periphery to initiate and modulate movement. The corticospinal tract is the largest descending tract present in humans and is divided into anterior and lateral components. The lateral corticospinal tract sends fibers predominantly to the extremity muscles, and the cortical innervation is contralateral, in other words, the left motor cortex controls the right extremities. The anterior corticospinal tract sends fibers mainly to the trunk or axial muscles. The control is both ipsilateral and contralateral. Therefore, trunk muscles are generally bilaterally cortically innervated.

When a motor act is planned and initiated by the premotor and supplemental motor cortex to the primary motor cortex in the precentral gyrus to move the leg, an impulse generated from the primary motor cortex will be conducted through the lateral corticospinal tract ipsilaterally through the corona radiata. It passes through the posterior limb of the internal capsule, through the cerebral peduncle and basis pontis, decussates at the caudal medulla (pyramidal decussation), and then continues to descend contralaterally into the spinal cord. Once that impulse reaches the cell body in the anterior horn (lower motor neuron) of the spinal cord, the motor fibers from the lower motor neurons will leave the spinal cord, proceed through the spinal nerve root, plexus, peripheral nerve, and finally to the neuromuscular junction where the impulse is transmitted to the muscle fibers resulting in contraction of that limb muscles. Damage to any of these structures may cause motor deficits.

Due to the pyramidal decussation of the lateral corticospinal tract in the caudal medulla, damage rostral or caudal to this decussation will be the defining feature of whether there will be ipsilateral or contralateral deficits. For example, if there is a lesion in the precentral gyrus of the left cerebral cortex, the patient will exhibit upper motor neuron signs with damage to the right side of the body. Contrarily, if there is spinal cord damage on the left side (below the pyramidal decussation), motor deficits will be present on the left side of the body. If there is spinal cord damage at the level of the anterior horn, then lower motor neuron signs will be present with ipsilateral deficits.

The lateral corticospinal tract is a very long structure. Damage to various vasculature may result in damage to the tract, depending on its location.

The primary motor cortex for the face and upper extremity receives its arterial supply from the middle cerebral artery (MCA). The primary motor cortex for the lower extremity receives its supply from the anterior cerebral artery (ACA). Damage to the lateral corticospinal tract here would result in contralateral motor deficits with UMN signs. An MCA occlusive lesion (stroke) will cause predominant face and arm weakness while an ACA occlusion will lead to lower extremity weakness. The corona radiata and internal capsule are supplied by the lenticulostriate arteries (branches of MCA). Occlusion of a lenticulostriate artery causing an ischemic infarction of the internal capsule (a lacunar infarct) will cause contralateral weakness of both the face, arm, and leg.[2] The lateral corticospinal tract through the brainstem except the caudal medulla is supplied mainly by the paramedian branches of the basilar artery. The caudal medulla receives vascular supply to its midline structures via the anterior spinal artery. The anterior spinal artery continues to run down the spinal cord, and damage to this artery may result in motor deficits related to the corticospinal tract.

The lateral corticospinal tract is almost always avoided by neurosurgeons during surgery. Newer modalities like tractography and electrophysiological monitoring help them to achieve good resection of tumors by avoiding the tract and to prevent the development of irreversible motor deficits in the patients.

Any ischemic or hemorrhagic stroke affecting an area of the brain that contains the lateral corticospinal tract will cause contralateral weakness of the extremities. When the language area of the dominant hemisphere is involved, the patient will present with aphasia. When the orolingual regions of the cortex are involved, the patient will present with dysarthria. Hemiparesis and aphasia are important disabilities that are often persistent after a stroke, and it is the leading reason for stroke-related disability. Stroke is now the fifth leading cause of death in the United States and the leading cause of disability.

Although almost completely eradicated, poliomyelitis was a prevalent demonstration of damage to the lateral corticospinal tract. Poliovirus is a member of the Picornaviridae family and has a fecal-oral transmission. Once transmitted, it replicates in the oropharynx and small intestine before spreading via the bloodstream to the CNS. In the CNS poliovirus causes the destruction of the cell bodies in the anterior horn of the spinal cord.[3] This results in ipsilateral LMN deficits such as muscle weakness/atrophy, fasciculations, hyporeflexia, and flaccid paralysis. Manifestations of this infection will begin in the legs and ascend until it reaches the respiratory muscles which would cause paralysis and death. Being a viral disease, the CSF will show lymphocytic pleocytosis (increased white blood cells [WBCs]), a slight increase in protein, and no change in glucose. Thanks to the inactivated polio vaccine, this deathly illness is no longer prevalent. In the United States, the commoner form of polio-like illness with similar pathophysiology is caused by other enteroviruses. The epidemics of acute flaccid myelitis caused by different strains of enteroviruses share the same pathophysiology.

Spinal muscular atrophy, also known as Werdnig-Hoffman disease in infants and Kugelberg-Welander disease in juveniles, is a congenital degeneration of the anterior horns of the spinal cord. Since this disease results in symmetric degeneration of the anterior horns, it results in symmetric weakness with lower motor neuron signs. Infants are characteristically described as "floppy babies" with associated tongue fasciculations. This disease carries an autosomal recessive inheritance with a mutation in the SMN1 gene.[4]

There is a renewed awareness of ALS due to the 2014 social media "ice bucket challenge." Amyotrophic lateral sclerosis (ALS) can be caused by a defect in superoxide dismutase 1. Commonly known as Lou Gehrig disease, it displays both UMN and LMN deficits. Upper motor neuron deficits may include, dysphagia, dysarthria, spastic gait, and clonus. As a result of damage to the anterior horn of the spinal cord, lower motor neuron signs include weakness (dysphagia), fasciculations, and muscle atrophy. Patients experience such severe dysphagia that a common cause of death is aspiration pneumonia. This disease is classically associated with Stephen Hawking. Riluzole is a pharmaceutical treatment utilized for this condition.[5]

Deficiency of vitamin B12 most commonly occurs due to malabsorption (Chron's disease, gastric bypass surgery), malnutrition (vegans), pernicious anemia, or rarely due to Diphyllobothrium latum (fish tapeworm). Most commonly, it occurs due to malabsorption rather than malnutrition because the human liver has stores of vitamin B12 that may last up to 3 to 5 years. Malabsorption versus malnutrition has historically been distinguished via the Schilling test. Diagnosis of B12 deficiency may be done by labs illustrating an increase in both methylmalonic acid and homocysteine. As homocysteine is also elevated in folate deficiency, it is important to test for methylmalonic acid levels to distinguish the 2. Neurologic manifestations of this condition cause subacute combined degeneration of the cord.[6] The term describes a combined degeneration of the dorsal column and the lateral (corticospinal) tract. There is widespread demyelination of the spinocerebellar tracts, lateral corticospinal tracts, and the dorsal columns. The patient may experience symptoms such as paresthesias, ataxic gait (spinocerebellar), impaired proprioception (dorsal columns), and UMN motor weakness since the anterior horn is generally spared.

Brown-Sequard syndrome is due to a hemisection of the spinal cord. A perfect example of a variety of co-existing deficiencies, it is worth mentioning due to the encompassing involvement of the lateral corticospinal tract. Patients symptoms may include:

Clinicians should note that if the lesion occurs above T1, the patient may present with Horner syndrome (miosis, ptosis, and anhidrosis) due to damage to the sympathetic chain.[8] 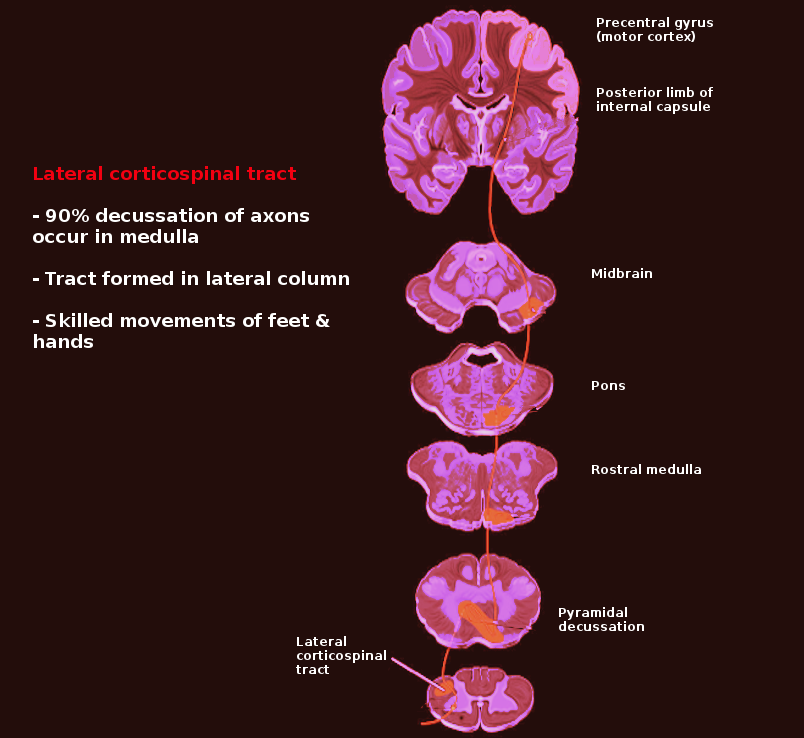 Bissaro M,Federico S,Salmaso V,Sturlese M,Spalluto G,Moro S, Targeting protein kinase CK1δ with Riluzole: could it be one of the possible missing bricks to interpret its effect in the treatment of ALS from a molecular point of view? ChemMedChem. 2018 Oct 25     [PubMed PMID: 30359484]