The boundaries of the anterior cervical triangle include the anterior margin of the sternocleidomastoid muscle, the midline of the neck, and the inferior border of the mandible [1]. The submental triangle situates within this region and is differentiated from the other triangles because it is unpaired. The apex of the triangle is the chin, the base is the body of the hyoid bone, and the sides are formed by the anterior bellies of the digastric muscle. Furthermore, the left and right mylohyoid muscles constitute the floor. They insert to the mylohyoid line of the mandible and run medially and downward to attach to the body of the hyoid bone. The submental triangle harbors the submental lymph nodes that drain the mental region, the tip of the tongue, inferior lip, and incisor teeth. Also, the mylohyoid nerve and veins that drain into the anterior jugular vein traverse this region [2]. The anterior bellies of the digastric muscle, which attach to the digastric fossa, separate the submental from the submandibular triangle.

The submental lymph nodes collect lymph from the central area of the lower lip, the skin of the mental region, the tip of the tongue, and the incisor teeth. Next, they drain into the submandibular lymph nodes and the deep cervical group, which eventually drains into the jugular lymph trunk.

The submental and facial arteries are responsible for the blood supply of the anterior belly of the digastric muscle [6]. In contrast, the mylohyoid muscles are irrigated by the mylohyoid artery, a branch of the inferior alveolar artery [5].

A deficiency in the differentiation of the first pharyngeal arch is responsible for some variations of the anterior belly of the digastric muscle. These variations must be taken into consideration while performing surgery in the submental triangle region [2].

When performing surgery to remove the anterior belly of the digastric muscle from the mylohyoid muscle, the lingual nerve and the hypoglossal nerve must be considered because they often present in a complicated arrangement in both the submental triangle and the submandibular triangle [4].

The submental triangle is clinically relevant because tumors and cysts develop within its limits, and abscesses from other regions extend to the area. Furthermore, swollen submental lymph nodes raise suspicion about malignant lesions in their tributary regions. However, lesions of the submental triangle usually develop from a local and benign pathology of the head and neck [9].

A study of 24 masses found in the submental triangle revealed various entities, including lipoma, sarcoidosis, non-Hodgkin lymphoma, hemangioma, abscess, dermoid cyst, and reactive lymphoid hyperplasia [9]. They also found that the submental triangle masses can be complicated by dental presentations and cheilitis [9]. Masses confined to the submental triangle are diagnosed by fine-needle aspiration, and the mainstay treatment is surgical excision except in abscesses that are treated with drainage and systemic antibiotics. Such is the case of odontogenic infections that can sometimes extend to the submental space and form an abscess. If required, the clinician will drain it via percutaneous incisions, and since the triangle lacks arteries and only contains few structures, the risk of damage during the incisions is low [1].

A congenital lymphatic malformation can manifest as a submental space mass, which is suggested by clear fluid in the fine needle aspiration and low flow lesion in ultrasonography with Doppler [10].

The submental lymph nodes are commonly involved in the metastasis of oral cavity cancer [11]. But, they are an uncommon site of tuberculous cervical lymphadenitis [12]. 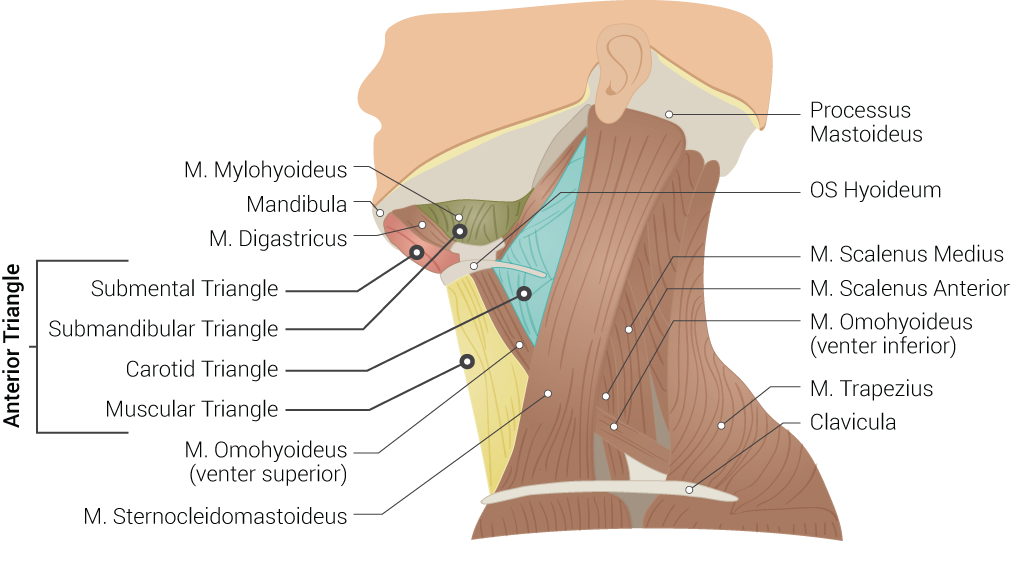 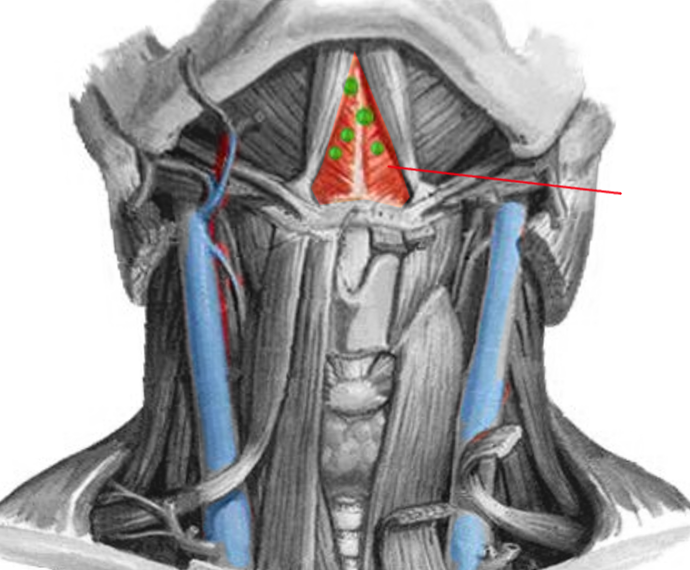 Ying M,Ahuja A,Brook F,Brown B,Metreweli C, Nodal shape (S/L) and its combination with size for assessment of cervical lymphadenopathy: which cut-off should be used? Ultrasound in medicine     [PubMed PMID: 10576259]