The fifth cranial nerve, the trigeminal nerve, has three branches which are the ophthalmic, maxillary, and mandibular. The third branch is called mandibular nerve (V3). It is the largest of the three divisions and carries both afferent and efferent fibers. The first two branches of the trigeminal nerve carry only afferent fibers. The mandibular nerve innervates the lower face including the mandible, lower teeth, and oral mucosa, the anterior two-thirds of the tongue, lower lip, temporomandibular joint, the mastication muscles and some smaller muscles, the skin of the temporal region, an area of the auricle and external acoustic meatus. [1][2][3][4]

In the brainstem, the mandibular branch arises from 3 nuclei (mesencephalic, principal sensory, and spinal) which give rise to its large sensory root. The motor nucleus of the trigeminal nerve, located in the tegmentum of the upper area of the pons, gives rise to the motor root of the nerve [4]. The motor root runs along the trigeminal cave and joins the sensory root before leaving the skull through the foramen ovale and enters the infratemporal fossa. The mandibular nerve is the only branch of the trigeminal nerve that contains a motor root.

In the infratemporal fossa, near the skull base, the main trunk immediately gives off the sensory meningeal branch and motor muscular branches to the medial pterygoid, tensor tympani, and tensor veli palatini muscles. After that, the main trunk divides into two: smaller anterior and larger posterior. The smaller anterior trunk carries efferent fibers that supply the temporalis, masseter, and lateral pterygoid muscles, and afferent fibers that form the buccal nerve. The larger posterior trunk gives off the auriculotemporal nerve which wraps around the medial meningeal artery and supplies sensory innervation to the cutaneous tissue around the auricula and temporal regions. The larger posterior trunk then divides into two main splits, lingual and inferior alveolar. The lingual nerve supplies sensory innervation to the anterior two-thirds of the tongue excluding taste. The inferior alveolar nerve supplies motor innervations to the mylohyoid and anterior belly of digastric muscles and sensory innervation to the teeth and mucoperiosteum of mandibular teeth, as well as sensory to the chin and lower lip.

The trigeminal nerve is derived from the first pharyngeal arch. The musculature of the first pharyngeal arch includes the muscles of mastication, anterior belly of digastric, mylohyoid, tensor tympani, and tensor veli palatini muscles. The development of the mandibular nerve is similar to that of the ophthalmic and maxillary branches. The development follows in 3 stages. First, a pioneer neurite emerges, and a nerve forms as other, later neurites fasciculate with this. Upon reaching the inside surface of the cement gland, the neurites separate and penetrate holes in the basal lamina. Finally, the neurites grow between the cells they will innervate and form free nerve endings.

The posterior trunk of the mandibular nerve splits into two branches known as the inferior alveolar nerve and the lingual nerve. The inferior alveolar nerve carries both motor and sensory fibers and travels along the medial aspect of the lateral pterygoid muscle. Before entering the mandibular foramen, it gives rise to branches that provide motor innervation to the mylohyoid and anterior belly of the digastric muscle which is responsible for elevating the hyoid and complex movements of the jaw (speaking, swallowing, chewing, and breathing).  Once the nerve enters the mandibular foramen, it provides innervation to the mandibular teeth and the lower alveolar ridge. A branch of the nerve exits via the mental foramen to become the mental nerve which provides sensory innervation to the dermis of the chin and lower lip and the remaining nerve fibers continue anteriorly to provides innervation to the canines and incisors. The lingual nerve innervated the anterior two-thirds of the tongue and mucous membrane for sense but does not innervate taste fibers.[8][9]

Quantitative studies have been done to estimate the position of the lingual nerve in relation to the third molar region. The studies report that the mean horizontal distance of the nerve to the lingual plate ranges from 0.58 to 3.45 mm; whereas the mean vertical distance of the lingual nerve below the alveolar crest is between 2.28 and 8.32 mm. This is important for oral surgery, for example, third molar extraction, mandibular trauma management, periodontal procedures, and excision of neoplastic lesions.

The long buccal nerve may innervate the mandibular molar teeth by entering the alveolar bone through the retromolar foramina. This could be responsible for the failure of the traditional alveolar nerve block.

The mandibular nerve has an important role in the field of oral maxillofacial surgery and anesthesia. Major surgical concerns include the location of the infratemporal fossa where mandibular nerve compression is common. The infratemporal fossa is one most difficult regions to access surgically. In anesthesia, variations of the inferior alveolar nerve are of concern for surgical and dental practice. Case reports describe anatomical variations of inferior alveolar nerve mimicking a recurrence of keratocystic odontogenic tumors.

Both sympathetic and parasympathetic autonomic nerve fibers travel with different trigeminal nerve branches to reach their target organs and tissues.

Physicians and dentists not achieving complete mandibular nerve anesthesia is a common problem due to many physiological variations. Temporomandibular joint dysfunction (TMD) is caused by a group of conditions that cause pain and joint dysfunction in the jaw joint and muscles that control jaw movement. Many branches of the mandibular nerve are responsible for the control of jaw movement and dysfunction can result in TMD. The auriculotemporal nerve may be damaged during TMJ surgery, which may cause paresthesia of the auricle and the ear region.[10]

Ear pain due to radiation along the auriculotemporal nerve with a patient with lingual cancer has been documented. Tonic tensor tympani syndrome results in ear pain, fluttering sensations, or fullness of the ear. Increased activity of the tensor tympani muscle develops in many people with hyperacusis as a part of the startle response to certain sounds. 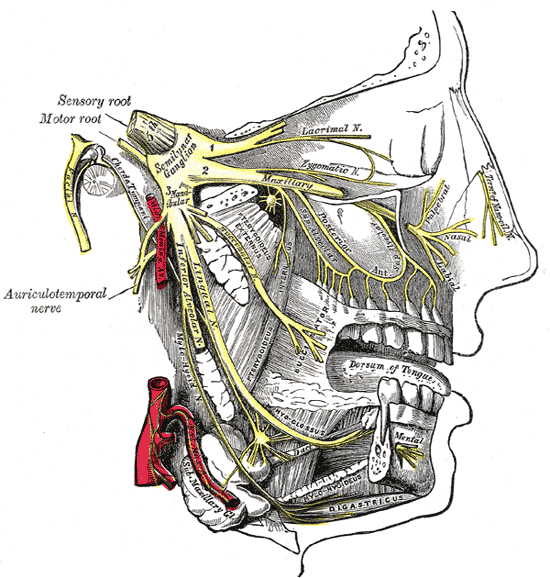