The thyroglossal duct is a connection that serves as a pathway for the primordium thyroid gland in its embryogenesis. This pathway originates at the junction of the anterior two-thirds and the posterior third of the tongue at its base. This pathway commences at the foramen caecum, goes anteriorly, and ends at 2nd and 3rd cartilage of the trachea, where the thyroid ends its trajectory and matures. In its trajectory, the thyroglossal duct passes anteriorly to the forming hyoid bone and thyroid cartilage, until it finally reaches its final position, anterolaterally, at the superior portion of the trachea.[1][2][3]

The primary function of the duct is to function as the pathway for the trajectory of the primordium thyroid gland, before its descent from the base of the tongue, at the foramen caecum, to the 2nd and 3rd cartilages of the trachea.[2]

Thyroid development begins in the 2 to 3 weeks of gestation and starts as a median outgrowth from the primitive pharynx. The thyroid primordium originates at the foramen caecum, which is the junction of the anterior two-thirds and posterior one-third of the tongue.

The development of thyroglossal duct cyst, due to the failed obliteration of the thyroglossal duct before the tenth week of gestation, requires a surgical procedure with removal of the cyst/mass. This surgical procedure necessary for the removal of the cyst/mass is referred to as the Sistrunk procedure and is considered the preferred method of resection of these midline neck cysts and/or masses. Depending on whether the developed mass is benign or malignant, treatment should go accordingly. As previously mentioned, the Sistrunk procedure would be the treatment of choice in cystic masses, which have a recurrence rate of under 3% while applying this procedure.

During the development of the embryo, the thyroglossal duct has a tendency to wrap itself inferiorly around the hyoid bone, and on rare occasions, it can entrap itself and be incorporated into the 2nd and 3rd arch components of the hyoid bone, causing the reoccurrence of cystic masses to be possible.

Due to the possibility of reoccurrences, the procedure requires excision of the mid-portion of the hyoid bone and a small amount of tongue tissue. The incision wound is then closed-up with an absorbable suture, and the dermabond is used for skin closure.

In case of a malignant mass, depending on the case and team of surgeons at hand, the procedure will or will not be applied. Radioiodine and levothyroxine therapy is usually the most common treatments in these cases and is also the treatment of choice. Partial resection or complete resection of the thyroid might also be part of the procedure.[4][5][6]

Clinically, the failure for the thyroglossal duct to obliterate by the 10th week of gestation is a frequent cause for the apparition of midline neck masses, called thyroglossal duct cyst. Around 7% of the normal population will suffer from this condition. The location of these masses can appear anywhere along the traject of the thyroglossal duct, and can even result from partial obliteration of the duct. This, essentially, means that if at any point in the pathway, the duct did not obliterate itself, a possible cystic mass will appear.

Most cystic masses arise at the infrahyoid level (65% of the cases) and result from the secretion of the epithelial lining that remained from the non-obliterated duct, resulting in possible inflammation and, therefore, the formation of a thyroglossal duct cyst. These are the most common cause of midline neck masses around the world.

As for the treatment and prognostics of these masses, given that the most common type of thyroglossal duct cyst carcinoma is the papillary thyroid cancer, the prognosis is good. Because the treatment of papillary thyroid cancer has improved over the years, patients tend to respond well to the usual therapy. As for other types of carcinoma, prognosis worsens as cancer becomes more aggressive, and thus, the treatment options become limited due to the poor response to chemotherapeutic and radiotherapeutic agents.[2][7][8][9][10] 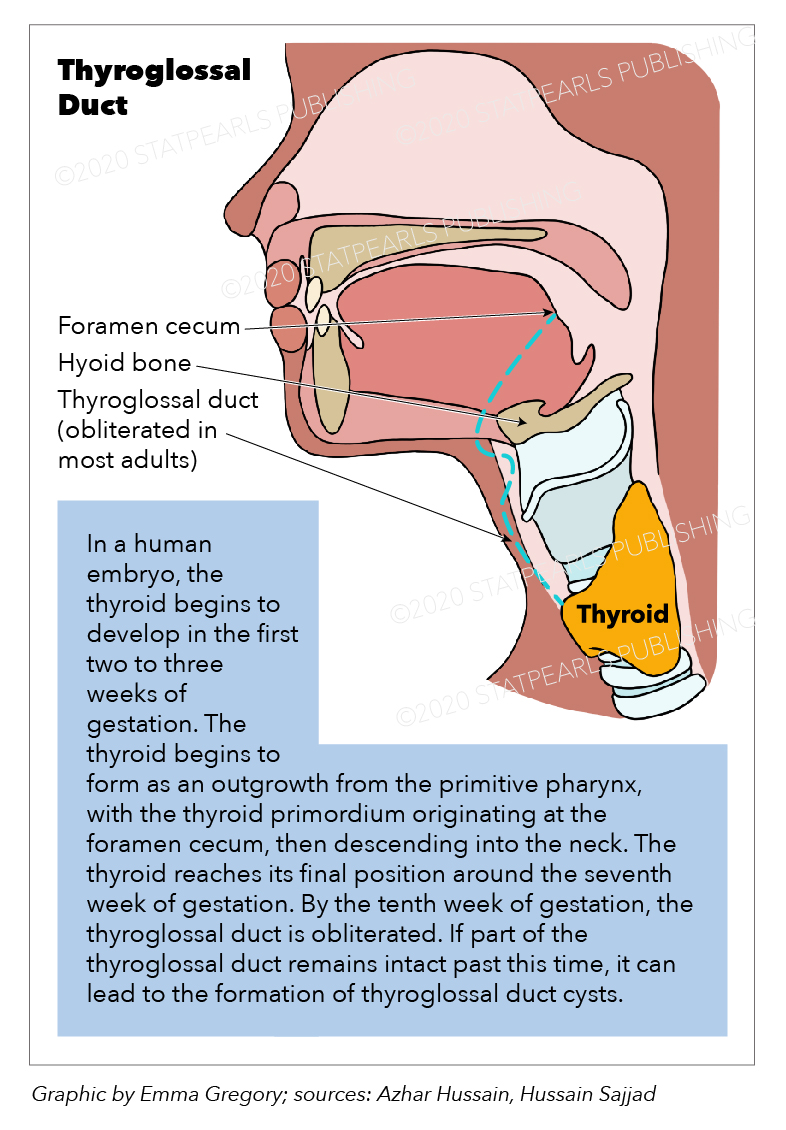