The retropharyngeal space (RPS) is an anatomical region that spans from the base of the skull to the mediastinum. Its location is anterior to the prevertebral muscles and posterior to the pharynx and esophagus. It's bounded anteriorly by the buccopharyngeal fascia, laterally by the carotid sheath, and posteriorly by the prevertebral fascia. The RPS is divided by the alar fascia into two components–the “true” retropharyngeal space and the “danger space.” The true RPS is located anterior to the danger space and extends from the base of the skull to between the T1-T6 vertebrae.

The termination of the true RPS along the upper thoracic spine (T1-T6) is variable based on where the alar fascia joins and fuses with the visceral fascia. The danger space courses more inferiorly than the true RPS, running into the posterior mediastinum until the level of the diaphragm. This anatomical connection between the pharynx and the mediastinum is where the danger space acquires its name as it serves as a potential channel for infection to spread between these two sites.[1][2]

Within the true RPS, lymph nodes and fatty tissue are the predominant tissues. The suprahyoid RPS houses the retropharyngeal lymph nodes, which are responsible for most of the lymphatic drainage of the pharynx. The retropharyngeal lymph nodes lie medial to the internal carotid artery and further divide into medial and lateral masses. The medial group atrophies throughout childhood, making children more likely to experience RPS infections than adults. The lateral group, named the nodes of Rouvière, persists throughout adulthood and can become a site of metastasis for head and neck cancers. The danger space is composed of solely adipose tissue and, therefore, can be affected by non-nodal diseases.[1][2]

The blood supply to the pharynx varies based on anatomic location. The superior pharynx receives its blood supply from the ascending pharyngeal artery and the lesser palatine arteries. The inferior pharynx’s blood supply comes from the superior thyroid artery and the inferior thyroid artery. Another significant relation to note is the proximity of the carotid sheath (internal carotid artery, common carotid artery, internal jugular vein, and vagus nerve) to the retropharyngeal space, composing the lateral border of the region.

The longus colli muscles serve as an important landmark for the RPS as they mark the location of the medial group of retropharyngeal lymph nodes from the lateral group of nodes. The medial lymph nodes are found anterior to the longus colli muscle, and the lateral lymph nodes are found ventral to the muscle. The prevertebral space is located directly posterior to the danger space and houses the levator scapulae, splenius capitis, scalenes, and splenius cervicis muscles. This anatomical relationship becomes important as a mass in the prevertebral space can be suggested by anterior displacement of the RPS.[1]

In rare cases, the internal carotid artery can take an anomalous course through the retropharyngeal space; this may be congenital in nature, due to an improperly descended third aortic arch, and present throughout one’s life with symptoms such as dysphonia. It may be more evident in older individuals with a history of atherosclerosis and hypertension, both of which can exacerbate clinical signs and symptoms. This anomalous artery may increase a patient’s risk for vascular injury during surgery in the pharyngeal region and during intubation.[4]

As described above, an anomalous internal carotid artery is an essential surgical consideration while operating in the pharyngeal area. There is a variety of disease pathologies that may occur in the RPS that could warrant surgery as one of the treatment options. These include:

The retropharyngeal space is a significant region to consider when evaluating a patient with neck pain as a multitude of pathologies can manifest and affect this area. The connection of the danger space to the mediastinum allows for the spread of infections from the oral cavity to the thoracic cavity. Potential life-threatening complications related to infections in the RPS include mediastinitis and airway obstruction. These two conditions should certainly merit consideration when the RPS is involved in a disease process.

There is a smaller number of other etiologies that may present in the RPS which are often non-surgical in treatment. These include: 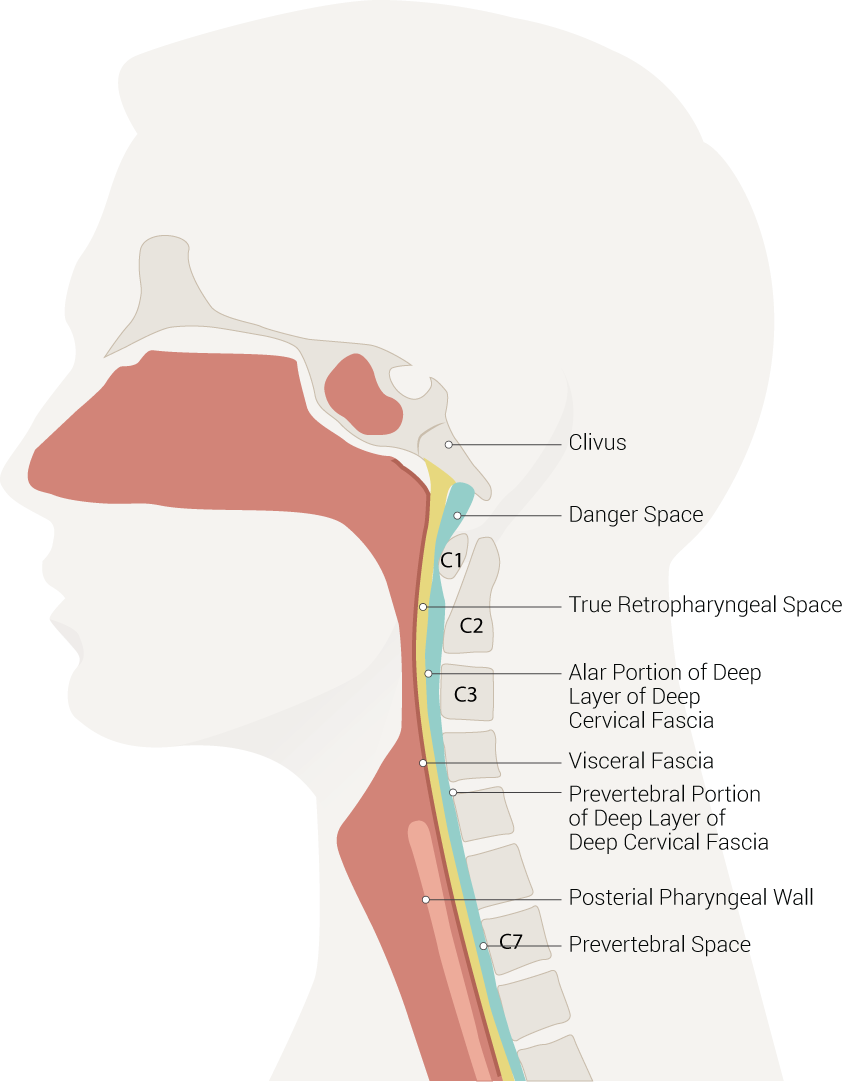