The foramen magnum is of interest for various scientific disciplines: forensic and physical anthropology; comparative anatomy; biology; surgery of the foramen structures and for the craniovertebral junction. There are morphological differences between men and women. The sagittal diameter is greater in the male, as is the transverse diameter.

The foramen magnum is the largest foramen of the skull. It is located in the most inferior portion of the cranial fossa as a part of the occipital bone. Its contents include the medulla oblongata, meninges, spinal root of cranial nerve XI, vertebral arteries, anterior and posterior spinal arteries, the tectorial membrane, and alar ligaments.

On the foramen magnum, there are two craniometric points: the basion, the median point of the front edge of the hole, and the opisthion, posterior correspondence.

The foramen magnum functions as a passage of the central nervous system through the skull connecting the brain with the spinal cord. On either side of the foramen magnum is an occipital condyle. These condyles form joints with the first cervical vertebra.

All the bones of the skull develop from paraxial mesoderm and neural crest cells. During gastrulation in the third week, mesenchymal cells migrate through the primitive streak to form the mesoderm. At the end of the third week, the paraxial mesoderm is segmented into somites that differentiate to become sclerotomes.[1] During the fourth week, the occipital sclerotomes concentrate around the notochord under the influence of signals from the rhombencephalon.

These sclerotomes derive membrane and cartilage, the developmental origin of the occipital bone. Four primary cartilaginous centers, the anterior basioccipital (basilar), the lateral exoccipitals (condylars), and the posterior supraoccipital (squamous), in addition to a fifth membranous element, referred to as the interparietal combine around the foramen magnum to form the occipital bone. The mendosal suture runs horizontally between the developing inferior supraoccipital and superior interparietal bones.[2]

Cranial nerve XI, or the accessory nerve, originates from the upper spinal cord and medulla and enters the skull through the foramen magnum. This nerve innervates the sternocleidomastoid and trapezius muscles and provides motor function.

The sternocleidomastoid muscle acts to flex and extend the neck and turn the head to the contralateral side. The trapezius muscle shrugs the shoulders.

There are a number of pathological states directly associated with the foramen magnum. Elevated intracranial pressure (greater than 20 mm Hg) often results from sources of edema such as stroke, trauma, mass effect, and infection and represents a serious prognosis. As the total volume in the skull is fixed and consists of blood, cerebrospinal fluid (CSF), and brain tissue, the increased pressure may lead to compensation via cerebellar tonsil herniation through the foramen magnum. The clinical picture of any herniation includes hypertension, bradycardia, and respiratory depression, but cerebellar herniation specifically causes compression of the respiratory centers of the medulla and may be fatal. The anatomy of the foramen magnum may influence the displacement of the herniated tissues.[6]

In another subset of clinical associations with this anatomic structure, patients with Chiari malformations have statistically larger foramen magnums compared to the normal population. Chiari I is the herniation of the cerebellar tonsils (a single tonsil 5 mm or both tonsils 3 mm) through the foramen magnum. While some patients are asymptomatic, there is a wide range of severity of clinical symptoms. The mildest being infrequent exertional headaches. Severe cases present with significant myelopathy and brainstem compromise. Common complications include syringomyelia and hydrocephalus. In babies, there are associated sleep apnea and feeding difficulties.[8]

Chiari II is the inferior displacement of the vermis, cerebellar tonsils, medulla, and fourth ventricle through the foramen magnum. Clinical presentation is more severe in Chiari II than Chiari I and is strongly associated with lumbar myelomeningocele and supratentorial anomalies such as corpus callosal dysgenesis, heterotopias, and sulcation abnormalities. Approximately 80% to 90% of children with Chiari II malformations present with hydrocephalus secondary to fourth ventricle obstruction requiring shunt placement. Patients with Chiari III malformations present with encephalocele in addition to the abnormalities of Chiari II.[8]

A mass represents another form of compression adjacent to the foramen magnum. Meningiomas are a benign slow-growing central nervous system tumors of the arachnoid cells of the dura mater most often arising in the basal region of the cerebrum. Rarely they occur in the foramen magnum presenting with posterior headache, paresthesias, and motor deficits. The overall symptomology may be varied due to the anatomic proximity to the cerebellar tonsils, caudal medulla, lower cranial nerves, rostral spinal cord, and upper cervical nerves.[9]

A complication of chronic rheumatoid arthritis demonstrates another example of pathology associated with the foramen magnum. Rheumatoid arthritis-associated C1-C2 facet erosion and laxity of ligamentous restrains results in vertical atlantoaxial subluxation. This defect may further lead to a protrusion of the odontoid through the foramen magnum and compression of the midbrain. Other etiologies of atlantoaxial subluxation include trauma and congenital conditions such as Down syndrome. Clinical presentation varies widely as some patients experience few symptoms, but others experience significant instability and neurologic compromise.[10]

The occipital condyles comprise the osseous lateral boundaries of the foramen magnum. In patients presenting with high-energy trauma mechanisms of injury or high impact axial loads during various sporting events (i.e. American football, mountain climbing, extreme sports events), due diligence to rule out injury to the occiput-cervical junction, as well as the rest of the cervical spine is warranted via accurate history taking, physical examination, and appropriate imaging. At advanced (i.e. Level I) and regional trauma centers, computed tomogram imaging is performed as part of the advanced imaging protocol. It is important to recognize that even displaced occipital condyle fractures can be missed on initial radiographs. In the appropriate clinical scenario, consideration should be given to transferring the patient complaining of persistent neck pain even in the absence of neurologic symptoms upon presentation.[11] 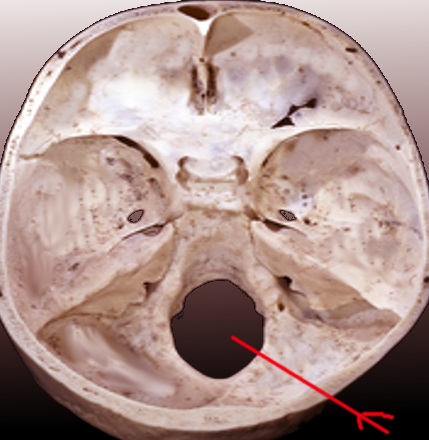 Matsumura G,England MA,Uchiumi T,Kodama G, The fusion of ossification centres in the cartilaginous and membranous parts of the occipital squama in human fetuses. Journal of anatomy. 1994 Oct     [PubMed PMID: 7961136]