Emissary veins are valveless venous structures that connect the extracranial vessels of the scalp to the intracranial dural venous sinuses and diploic veins. The presence and distribution of the emissary veins vary from person to person, and during childhood, these venous structures are found more frequently and with larger foramina. The valveless nature of these vessels facilitates bidirectional blood flow, which allows for the equalization of intracranial pressures and selective cooling of the brain.[1]

Tributaries of the pterygoid venous plexus include the sphenopalatine vein, pterygoid vein, masseteric vein, middle meningeal vein, inferior ophthalmic vein, greater palatine vein, alveolar vein, buccal vein, and the deep temporal vein. Blood can flow from the pterygoid venous plexus into the cavernous sinus through the bridge created by emissary veins. Major tributaries of the cavernous sinus include the superficial middle cerebral vein, the sphenoparietal sinus, the superior ophthalmic vein, the inferior ophthalmic vein, and the middle meningeal vein. Emissary veins also drain into diploic veins, located between the internal and external layers of compact bone within the skull.[3]

The emissary veins traverse through foramina in the skull associated with the passage of particular cranial nerves or through smaller foramina that do not transmit nerves. In addition to the previously mentioned emissary veins, some also consider the ophthalmic vein to be an emissary vein because it is a valveless vessel that connects extracranial and intracranial structures.[4]

There is about 2.6% of venous anomalies deriving from an aberrant embryological path. These can be asymptomatic (more often than not) or symptomatic (venous angiomas or vascular malformations). Veins with anatomy or path that deviates from normal physiology are called "Developmental venous anomalies (DVAs)." Probably, they result from a sudden arrest of their growth during the fetal period. They work fine, but they are potentially more prone to breakage, as they have a weaker structure. The incidence of stroke due to venous rupture of the DVA is about 0.22 on an annual basis. DVAs are associated with the presence of cavernous malformations.[7]

When can DVA be symptomatic? The etiologies related to clinical problems have flow-related, mechanical origins, and idiopathic origins. The mechanical causes can trace back to the presence of hydrocephalus or compression of a nerve pathway. The causes related to flow problems are related to disorders such as the presence of shunts: arteriovenous; increased or decreased. Symptomatic DVA problems can manifest themselves with headaches, neurological problems, coma.[7] 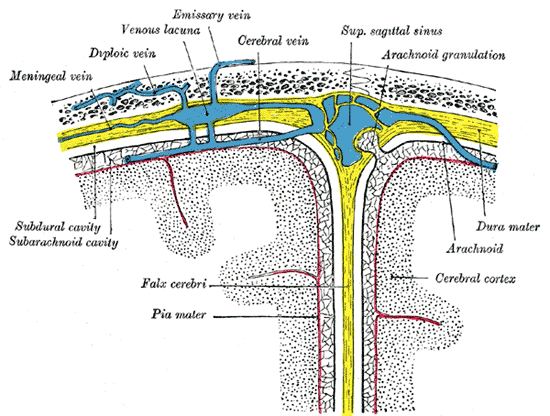