Otic ganglion is one of the four parasympathetic ganglia within the head region. An anatomist named Arnold first described it in 1828. It was called 'otic' as it was large in long-eared mammals such as donkey, rabbit, horse, and other ruminants.[1]

Located in the infratemporal fossa, the otic ganglion is the smallest of the four parasympathetic ganglia found in the head region. It is an oval but flat ganglion and approximately 2×1.5×0.4 mm in size. It lies inferomedial to the foramen ovale.[5] The ganglion is inferior to the greater wing of sphenoid and superior to the levator veli palatini muscle. It is related to the medial surface of the mandibular nerve laterally, and the cartilage of the auditory tube lies in its medial aspect. The medial pterygoid nerve runs anterior to the ganglion, and middle meningeal artery traverses posterior to it.[6] Even though the otic ganglion is related topographically related to the mandibular nerve, functionally, it is related to the glossopharyngeal nerve.[7]

Morphologically, the otic ganglion is seen as a yellowish-brown oval ganglionic structure bilaterally in most cases.[8] However, recent studies have shown that otic ganglion can appear as three types:

The compact type has a classic ganglionic shape and is the most common type. As the number of leaving branches increases, the ganglion appears less lobulated and more disperse. In the same individual, two different morphological types of a ganglion can both be present.[6]

The parasympathetic root of an otic ganglion is formed by preganglionic parasympathetic fibers that arise in the inferior salivary nucleus, located within the medulla oblongata of the brainstem. These preganglionic efferent parasympathetic fibers pass through the glossopharyngeal nerve. They then travel with its tympanic branch (Jacobson’s nerve) to form tympanic plexus in the middle ear cavity, before leaving it to form the lesser petrosal nerve.[2][9] The lesser petrosal nerve course along the floor of middle cranial fossa and exits the skull base through foramen ovale to enter the infratemporal fossa and join the otic ganglion. In some cases, the lesser petrosal nerve also exits the middle cranial fossa through foramen spinosum or sphenopetrosal fissure to joins the otic ganglion.[9] Within the otic ganglion, preganglionic parasympathetic fibers synapse with the postganglionic fibers. The postganglionic parasympathetic fibers then traverse through all branches of the mandibular division of trigeminal nerve to provide secretomotor fibers to mainly the parotid gland via the auriculotemporal nerve. It also supplies other areas of the orofacial region like the submandibular gland, sublingual gland, other salivary glands in the buccal mucosa, and blood vessels of the masticatory muscles through the other branches of the mandibular nerve.[10]

The sensory route of the otic ganglion receives fibers from the glossopharyngeal nerve via the tympanic plexus and lesser superficial petrosal nerve.[2][8]

Otic ganglion, like other parasympathetic ganglia within the head, is derived from Schwann cell precursors. These precursors migrate via preganglionic axons and differentiate into peripheral neurons when they reach the site of the adult ganglionic structure into which they develop.[3][11] By 32 to 34 days of embryonic life, otic ganglia are observable in humans, and by the 20th week of intra-uterine life, it will be a well-developed structure.[6]

It has recently come to light that the otic ganglion and pterygopalatine ganglia are a single and undifferentiated cell mass till the 16th week of gestation and later get separated by growing ala temporalis. They then reconnect by secondarily-formed communicating branch, the nervus sphenopidalis.[7]

Research has shown that the postganglionic fibers emerging from the otic ganglion innervate the blood vessels of the circle of Willis as opposed to the vertebrobasilar artery. The postganglionic otic fibers also terminate in the cavernous sinus via the external sphenoid nerve and form the cavernous sinus plexus with the sympathetic fibers from the internal carotid artery.[12] Research has also proven that, in rats, the middle meningeal artery and superficial temporal artery receive afferents from the otic ganglion through the auriculotemporal nerve.[6]

A recent study clearly shows that blood vessels in the lower lip exclusively receive innervation by postganglionic fibers originating from the otic ganglion, and not from the pterygopalatine ganglion.[13]

The auriculotemporal nerve, which connects to the otic ganglion through a communicating branch carries postganglionic parasympathetic secretomotor and sympathetic vasomotor fibers for the parotid gland.[2]

The otic ganglion showed a difference in the number and volume of nerve fiber bundles connected to it, which in turn resulted in three different morphological forms described above.[14][6] The otic ganglion also showed a disparity in the distance to the anterior section of the mandibular nerve, and it varied from 0 to 4 mm.[14]

Frey’s (auriculotemporal) syndrome occurs following surgery, trauma, or any pathology to the parotid gland or the auriculotemporal nerve that, in turn, damages the postganglionic parasympathetic, sympathetic and sensory nerves within them. Very rarely, Frey’s syndrome can occur following herpes infection.[15] The patients present with unilateral pain, sweating, and flushing in the cutaneous distribution of the auriculotemporal nerve following a gustatory stimulus. Many theories are in place to explain the phenomenon observed in Frey syndrome. The most accepted among them states the cause behind this phenomenon to be aberrant regeneration. Following damage to the auriculotemporal nerve, the regenerating nerve fibrils may become misdirected and join the sympathetic nerves innervating subcutaneous blood vessels and sweat glands, causing gustatory sweating and flushing.[4] Sometimes these symptoms can appear many decades after a parotidectomy surgery [16]. Confirmation of Frey syndrome is possible with a Minor starch-iodine test. Many surgical methods are available for the prevention of Frey syndrome, including the use of fascia or muscle flaps, fat grafts, or acellular dermal matrix (ADM). The different treatment options for Frey syndrome include the topical application of antiperspirants, injection of anticholinergics like scopolamine and intradermal injections of botulinum toxin A.

Recent studies have shown the presence of neuropeptide, pituitary adenylate cyclase-activating peptide (PAC-AP) in the otic ganglion, which plays a significant role in primary headache.[6] 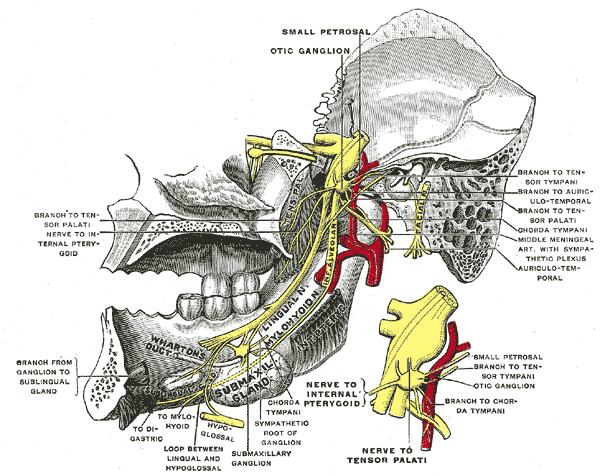 The Trigeminal Nerve, Mandibular division of trifacial nerve; seen from the middle line, The small figure is an enlarged view of the otic ganglion
Contributed by Gray's Anatomy Plates 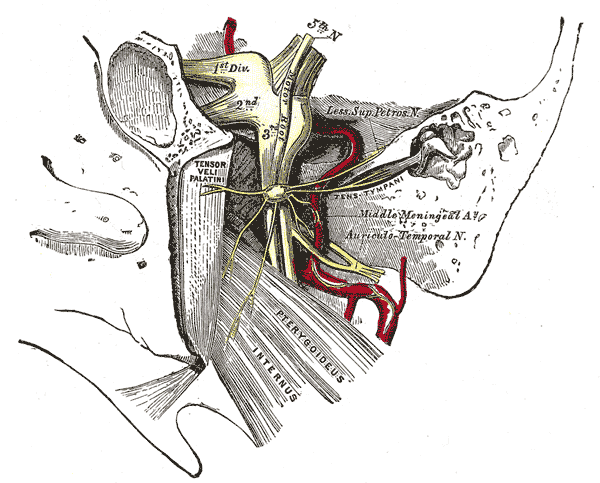 The Trigeminal Nerve, The otic ganglion and its branches
Contributed by Gray's Anatomy Plates

Suzuki N,Hardebo JE, The pathway of parasympathetic nerve fibers to cerebral vessels from the otic ganglion in the rat. Journal of the autonomic nervous system. 1991 Oct     [PubMed PMID: 1753063]