The semilunar sensory ganglion (also known as the trigeminal ganglion or Gasserian ganglion) is a thin, crescent-shaped structure situated in Meckel’s cave within the middle cranial fossa.[1] The semilunar ganglion is the great sensory ganglion of the fifth cranial nerve ( CN V)which is the largest and most complex of the 12 cranial nerves.The semilunar ganglion plays a critical role in expressing various neuropeptides and signaling molecules that are important in gene expression, modulation of sensory information, and peripheral and central sensitization.[2]The ganglion contains the cell bodies of the sensory roots of the three major divisions of the trigeminal nerve (CN V); the ophthalmic (V1 sensory), maxillary (V2 sensory) and mandibular (V3 motor and sensory) branches of the motor root originates from cells located in the masticator motor nucleus of the trigeminal nerve located in the mid pontine portion of the brainstem. The trigeminal nerve is the largest of the 12 cranial nerves.

Located at the anterior, inferior, and lateral borders of Meckel’s cave, the semilunar ganglion is a crescent-shaped structure that is essential for releasing many neuropeptides and signaling molecules. As a potent vasodilator, calcitonin gene-related peptide is the most prevalent among these neuropeptides and plays a vital role in the pathophysiology of cluster and migraine headaches.[3] The semilunar ganglion also expresses many signaling molecules, including adenosine triphosphate, neurotrophic factors, nitric oxide, and cytokines, that target nearby neurons or satellite glial cells. These signaling molecules and neurotrophic factors play an important role in peripheral and central sensitization, such as the case with primary headaches.[2]

The convex border of the semilunar ganglion is located at the anteroinferolateral walls of Meckel’s cave, while the concave border, which is also known as the sinus ganglion, is located posterosuperomedially in the direction of the trigeminal cistern and the ostium of the Meckel’s cavity. A layer of dura propria and arachnoid that surrounds the semilunar ganglion. The posteromedial portion of the semilunar ganglion is situated in the trigeminal cistern while the anteroinferior portion is located outside of the trigeminal cistern as it adheres closely to the dura of the Meckel’s cavity medially and the dura of the temporal fossa laterally.[1] The semilunar ganglion can segregate into three divisions: the ophthalmic (V1), which is the dorsal division, maxillary (V2), which is the intermediate portion, and mandibular (V3), which is the ventral division. The ophthalmic portion exits the semilunar ganglion and enters the orbit via the superior orbital fissure. It separates into the supraorbital, supratrochlear, and nasociliary nerves that provide innervation to the nose and forehead. The maxillary portion leaves the middle cranial fossa and passes through the orbit via the inferior orbital fissure, and includes multiple branches, such as the infraorbital, palatine, zygomatic, and superior alveolar nerves. The mandibular division separates into the buccal, auriculotemporal, lingual, and inferior alveolar nerves, and is the only division that provides sensory and motor components.[4]

Only the mandibular branch of the trigeminal nerve has a motor component. The mandibular branch provides motor innervation to the facial muscles that are involved in mastication, including the master, temporalis muscle, and the lateral and medial pterygoids. It also separates into branches that innervate the tensor tympani, tensor vela palatine, mylohyoid, and the anterior part of the digastric muscle.[4]

Nerve block utilizing anatomic landmarks or image-guided by fluoroscopy or computed tomography of the semilunar ganglion may be effective for patients who have refractory facial pain due to trigeminal neuralgia, certain headaches, conditions such as recalcitrant herpes zoster ophthalmicus and postherpetic neuralgia who have not responded well to medical management were generally carbamazepine as the drug of choice. The procedure may also be an option in cases where neurosurgical management is not practical.[4]

As stated previously, the semilunar ganglion plays a critical role in expressing various neuropeptides and signaling molecules that are important in gene expression, modulation of sensory information, and peripheral and central sensitization. As a potent vasodilator, calcitonin gene-related peptide is the most prevalent among these neuropeptides and plays an essential role in the pathophysiology of cluster headaches. The semilunar ganglion also expresses many signaling molecules, including adenosine triphosphate, neurotrophic factors, nitric oxide, and cytokines, that target nearby neurons or satellite glial cells.[3]

The semilunar ganglion is also known to become latently infected with the herpes simplex virus type-1 (HSV-1).[8] HSV-1 would periodically reactivate, whereas the varicella-zoster virus rarely reactivates itself. The reactivation of this virus generally results in various cranial nerve disorders, including vestibular neuritis, Bell’s palsy, and herpes labialis. Also, as stated previously, neural of the semilunar ganglion may be effective for patients who have refractory facial pain, certain headaches, and certain conditions, such as recalcitrant herpes zoster ophthalmic and postherpetic neuralgia who have not responded well by other means.[4] The semilunar ganglion also has involvement in the often underappreciated perineural spread of tumors, which are the most common malignant in which there is delayed diagnosis. This situation is a well-recognized phenomenon in head and neck cancers, including squamous cell carcinoma, adenocystic carcinoma, lymphoma, and rhabdomyosarcoma.

The semilunar ganglion is also known to incur damage in patients with trigeminal trophic syndrome (TTS).[9] Commonly seen in elderly patients, TTS is a form of chronic facial ulceration that usually appears in a unilateral crescent-shaped form near the nasal ala and, in more serious cases, in the jaw, forehead, cheeks, and lips. Patients with TTS may report paresthesias, including burning or shooting pains. The general belief is the ulceration might be the result of the patient touching their face consistently, especially during sleep. Some treatment options include altering the patient’s behavior, occlusive dressings, oral psychotropic medications, and arm splints.[9] 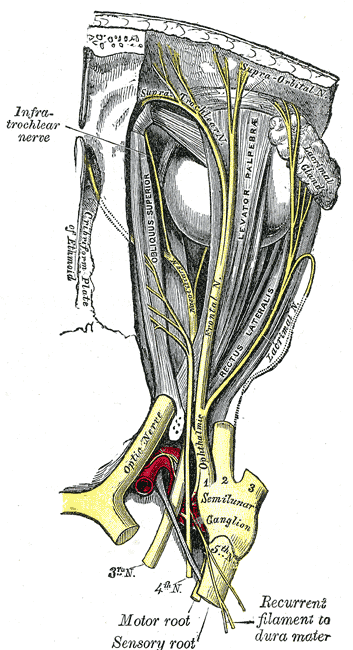