An important contributor to thumb function, the extensor pollicis longus (EPL) muscle is an extrinsic thumb muscle which extends and adducts the thumb metacarpophalangeal (MCP) and interphalangeal (IP) joints. Innervated by the posterior interosseous nerve, the EPL receives its blood supply from the anterior interosseous artery, posterior interosseous artery, radial artery, and ulnar artery. Extensor pollicis longus variants are rare, with a prevalence of only 1%. The EPL tendon is associated with pathologies ranging from stenosing tenosynovitis to spontaneous tendon rupture.[1] These pathologies are often seen in association with either medical comorbidities (e.g., rheumatoid arthritis) or as sequelae or associated pathology in the setting of trauma (e.g., distal radius fractures).[2][3][4][5] In regards to the latter, the EPL may spontaneously rupture in up to 5% of adults following a nondisplaced distal radius fracture, or in pediatric patients who had dorsal plating for a displaced distal radius fracture. Overall, it is important to have a good understanding of the EPL to understand the anatomy and potential pathologies, particularly as each relates to the potential compromise of dynamic thumb function.[6][7][8][9]

The extensor pollicis longus muscle is an extrinsic thumb muscle that belongs to the deep group of dorsal forearm muscles. The extensor pollicis longus originates on the middle third of the posterior ulnar diaphysis, traverses laterally along the forearm, passes over Lister's tubercle, goes through the third osteofibrous tunnel and travels superiorly to the extensor carpi radialis longus, and extensor carpi radialis brevis then inserts on the base of the distal phalanx of the pollex. An osteofibrous tunnel is a passageway found along synovial joints, which has a bony floor, and a fascial roof, with the fascia running in a transverse pattern to help contain neurovascular structures and tendons. These tunnels also have the name of the extensor compartments.  The EPL is the only anatomic occupant of the third extensor compartment. There are a total of six extensor compartments in the wrist.[2][10][11][12]

As the extensor pollicis longus crosses the wrist, the muscle belly transitions into a tendon (surrounded by a synovial tendon sheath), which forms the medial border of the anatomical snuffbox of the wrist. The tendon splits into two different parts, the proximal and distal tendonous divisions, which are separated by a fenestra. The total length of the tendon ranges from 6.7 to 9.7 cm, and the fenestra ranges from 3.1 to 3.5 cm in length. Three tendons form the anatomical snuffbox surface, from medial (ulnar) to lateral (radial):

The extensor pollicis longus functions to extend the thumb and adduct the thumb at the MCP and IP joints.[19]

The extensor pollicis longus receives vascular supply from many arterial branches, described below going from proximal to distal[6]:

Anomalies of the extensor pollicis longus can be organized by utilizing the Turker Classification[8]:

A study discovered a cadaver with a unilateral, duplicated tendon of the EPL, which had its own muscle belly. In that case, the EPL bifurcated into two tendons by the extensor carpi radialis longus tendon, with one tendon running along the normal course of the EPL and inserting at the same location as it, and the other tendon (along with its small muscle belly) running along the extensor indicis pathway, inserting at the same location. The muscle belly for the duplicated EPL tendon originated from the normal EPL muscle belly and interosseous membrane. While this may appear to be a Turker Type 1e EPL anomaly, since the duplicated tendon had its own muscle belly within the third extensor compartment, it does not fit in the 1e classification since that’s only an anomaly of the number of tendons, not the number of muscle bellies.[21]

It has been described in the case of an asymptomatic patient with hypoplasia of the thumb musculature, that the extensor pollicis longus may run through the third extensor compartment, then attach on the radial aspect of the proximal phalanx of the first digit. This arrangement may occur as an adaptive response to compensate for missing abductor pollicis longus and extensor pollicis brevis muscles and preserve thumb extension and abduction.[2]

Overall, it is important to be aware of the rare, yet significant, variations of the EPL, as it will help surgeons and clinicians confidently and precisely treat patients with wrist and hand pathologies.

Patients with extensor pollicis longus stenosing tenosynovitis, a rare condition, likely require surgical treatment because there have not been any documented successful attempts at treating patients non-operatively. Additionally, as previously advocated in the literature, the importance of surgical treatment for EPL tenosynovitis is inevitably linked to the concerns about EPL tendon rupture with chronic attrition.  When performing the surgical correction, it is imperative that the EPL tendon is completely released, and transposed into the subcutaneous tissue, on the radial aspect of Lister's tubercle. Transposing the EPL tendon prevents recurrence of tenosynovitis, tendon bowstringing, and prevents compromise of its function.[7]

Displaced distal radius fractures that require open reduction and internal fixation (ORIF) may receive surgical treatment with dorsal or volar plating procedures. Patients treated with a dorsal plate have an increased risk for iatrogenic injury to the extensor tendons in the wrist and hand, through mechanical irritation of the tendons, which may lead to a ruptured extensor pollicis longus tendon.  Although technological advancements in low-profile dorsal plating procedures have continued to evolve with mitigation of the risk of iatrogenic extensor tendon injury,[23] this complication remains a known risk.[24]

Patients requiring surgical reconstruction of a ruptured extensor pollicis longus tendon may get a tendon transfer or a free tendon graft. The extensor indicis is commonly used for tendon transfer, while other tendons that are usable include the palmaris longus, extensor carpi radialis longus, extensor carpi radialis brevis, and abductor pollicis longus. While the palmaris longus tendon is avascular, a palmaris longus tendon transfer may be performed to preserve index finger extension power, which commonly decreases after a tendon transfer involving the extensor indicis. It is essential to make sure there is an appropriate amount of tension in the reconstructed tendon; if there is too much tension, the thumb will be hyperextended and will not be able to flex correctly. Without enough tension, there will be extension deficits. A surgical technique to approximate the appropriate tension is to lay the patient’s hand on the table, with the forearm pronated and the wrist in a neutral position, and measure the distance of the center of the patient’s thumbnail edge to the table. The distance should be 2 cm. If it is more or less, the suturing holding together, the reconstruction should be removed and re-done, to achieve appropriate tension in the reconstructed EPL, so that the thumbnail edge remains 2 cm off the table.[25]

Patients with EPL tendon anomalies typically are asymptomatic, without deficits in thumb extension or wrist/hand pain. Often, EPL tendon anomalies are found during surgery while correcting another wrist/hand pathology. In those cases, surgical intervention is not indicated because the patient is not having symptoms. However, when patients are having symptoms, surgical correction through procedures such as an extensor retinaculum release and Lister's tubercle removal is indicated to decrease the amount of EPL tendon compression within the extensor compartment.[8] 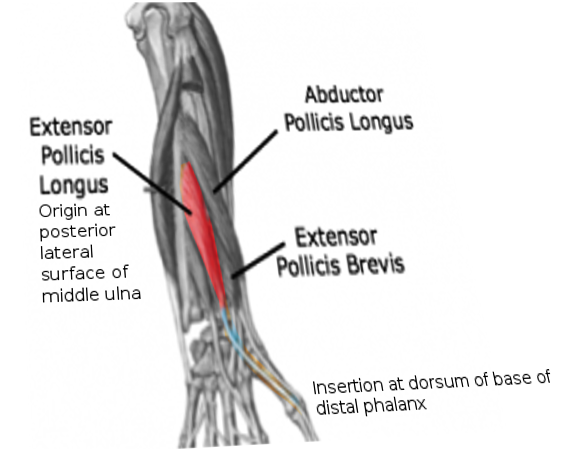 Huang HW,Strauch RJ, Extensor pollicis longus tenosynovitis: a case report and review of the literature. The Journal of hand surgery. 2000 May;     [PubMed PMID: 10811765]