The talus is the second largest bone in the hindfoot region of the human body. Responsible for transmitting body weight and forces passing between the lower leg and the foot[1] the talus is a component of many multiple joints, including the talocrural (ankle), subtalar, and transverse tarsal joints.[2] While the talus does not have any direct muscular attachments and has a tenuous and limited blood supply, it serves as the site of attachment for many ligaments including the lateral ankle ligaments and medial deltoid ligament complex.  Talus fractures comprise about 1% of all foot and ankle fractures. Additionally, nearly 70% of ankle injuries can cause varying degrees of chondral and osteochondral injuries to the talus.[3][4][5] The clinician must be aware of the occurrence of both isolated and associated talar injuries and their extent of clinical and potentially long-term implications.[6][7][8][9]

Acting as a bridge between the leg and foot, the talus distributes body weight to the foot and contributes biomechanically to various movements of the foot and ankle through the subtalar, transverse tarsal (Chopart), and talocrural joints.[3][6]

The talus serves as a site of attachment for numerous ligaments that stabilize the medial and lateral ankle and foot. The deltoid complex ligament (DCL) and spring ligament are on the medial side. The DCL is composed of superficial and deep layers, with the superficial layer containing the superficial posterior tibiotalar ligament (SPTL), tibiocalcaneal ligament (TCL), tibiospring ligament (TSL), and tibionavicular ligament (TNL) in a posterior-to-anterior order, and the deep layer containing the posterior tibiotalar ligament (PTT), deep tibiocalcaneal ligament (dTCL), and anterior tibiotalar ligament (ATTL) in the same order. The DCL restricts anterior, posterior, and lateral translation of the talus, as well as talus abduction. Additionally, the superomedial ligament (SML) of the spring ligament attaches to the talus on the medial ankle via fatty tissue, which runs from the calcaneus to the navicular and provides support to the talar head through maintaining the longitudinal arch of the foot. The TSL of the DCL connects to the SML, and anatomists have proposed that the components of the DCL and the spring ligament are all part of one continuous medial ankle joint capsule, which provides support to the ankle and subtalar joint. On the lateral aspect of the ankle, the talus serves as an attachment site for the anterior talofibular ligament (ATFL) and posterior talofibular ligament (PTFL). The ATFL originates on the anteroinferior lateral malleolus and inserts anterior to the lateral process of the talus. The PTFL arises on the posteroinferior lateral malleolus and inserts anterior and superior to the lateral tubercle of the talar posterior process. While the calcaneofibular ligament (CFL) does not have a direct attachment on the talus, it is worth noting that is the third lateral ankle ligament. The lateral ankle ligaments function to resist ankle inversion at the subtalar joint and commonly suffer injury in inversion ankle sprains.[5][10][11][12]

The talus and calcaneus appear as cartilage precursors during the eighth week of gestation, and by the ninth embryonic week, the subtalar joint starts forming, with the posterior aspect developing faster than the anterior aspect. With the fusion of three ossification centers, by the tenth week of gestation, the anterior, posterior, and medial portions of the talus form. The first ossification center fuses to create the head and body of the talus, the second fuses to develop the posterior process of the talus, and the third fuses to form the lateral process of the talus,  Around the eleventh week of gestation, marks the completion of the tarsal canal and sinus tarsi. By the 14th week, the joints in the area, as well as their surrounding joint capsule and ligamentous structures (like the inferior extensor retinaculum) fully form.[4][5][13]

The talus does not serve as the site of any muscle attachment, which is significant because that means the talus does not have secondary sources of blood supply. Therefore, if there is vascular compromise to the talus through traumatic injuries such as in the setting of displaced fractures, there is a relatively high risk of developing post-traumatic, avascular necrosis (AVN).[3]

Os trigonum is a frequently encountered accessory bone (incidence 1 to 25%) that forms due to incomplete ossification at the posterior process secondary ossification center around the tenth week of gestation. The three types of os trigonum are type I (complete separation from the talus), type II (connected to the lateral tubercle through hyaline cartilage), and type III (Stieda process, which is when the lateral tubercle appears elongated as it projects posteriorly). An os trigonum can cause symptoms when there is forceful ankle plantarflexion or from repetitive plantarflexion, which causes trauma to the cartilage connecting the os trigonum to the talus.[3][17]

The talus can be involved in two different types of tarsal coalition patterns.  The two patterns include the talocalcaneal and talonavicular coalitions.  In general, these coalitions restrict motion secondary to the osseous or osseo-fibrous connecting constituents. It can occur congenitally when corresponding tarsal bones fail to separate during mesenchymal segmentation, or they can be acquired through trauma, arthritis, surgery, or abnormal growth patterns. A talocalcaneal coalition can cause general hindfoot pain, or it may be asymptomatic in patients, but by reducing subtalar joint mobility, it may lead to adjacent joint degeneration or predispose to traumatic injuries or fractures.[19]

When planning osteotomies or other surgical procedures to correct foot deformities like pes planus, the patient’s talar morphology should be evaluated using the modified Boyan Classification. Considering the patient’s talus morphology, a surgical plan which uses great care when working near the anterior/middle facets is necessary, so they are not damaged. Damage to the articular facets may induce osteoarthritis in patients.[4]

Arthroscopic surgery can be performed to treat patients with osteochondral defects on the talus, and when treating patients with hindfoot osteoarthritis, triple arthrodesis (fusion of the talocalcaneal, talonavicular, and calcaneocuboid joints) is a surgical option. When creating portals with arthroscopy, consideration of the location of the surrounding neurovascular structures at risk is warranted and a critical portion of the procedure.  Four different portals are options with triple arthrodesis, including the lateral portal (dorsal to the calcaneocuboid line), dorsolateral portal (medial to extensor hallicus longus tendon), dorsomedial portal medial to tibialis anterior tendon), and medial portal (distal to insertion of the tibialis posterior), all of which have corresponding neurovascular structures at risk. Each portal was found to have a good safety margin, but careful technique should still be used to prevent iatrogenic injury when performing arthroscopy.[15][20]

Osteochondral lesions of the talus (OLTs) can form when patients sustain trauma to the ankle, and up to 70% of ankle injuries cause osteochondral or chondral damage. When treating OLTs surgically, the size of the OLT plays a significant role in how the surgeon is going the treat the injury. OLTs under 150 mm in size are repaired via bone marrow stimulation methods, while OLTs over 150 mm get replaced with osteochondral transplants. MRI is routinely used to diagnose and grade OLTs and to prepare for surgery. However, a significant discrepancy between OLT size on MRI and the size of the lesion while performing arthroscopy has been seen, with MRI commonly overestimating the size of OLTs. Therefore, it is essential to educate patients about the possibility of a repair or replacement is done based on the actual size of the OLT during surgery and to ensure that all the proper supplies are prepared pre-operatively, especially for lesions close to the 150 mm size.[9]

Fractures of the talus have a high risk of developing AVN due to its inherently tenuous and limited blood supply.  Talar fractures make up one percent of all foot and ankle fractures, and the most common (around 50%) talar fractures occur in the talar neck since it is the weakest part of the talus.  Talar neck fractures are classified using Hawkins classification system:

Talar body fractures make up 20% of all talar fractures, and if a fracture extends through an articulating surface on the talar body, sequelae of osteoarthritis can occur.[8]

Avulsion Fractures of the Talus:

Through the subtalar joint, the talus maintains the medial and lateral longitudinal arches. When there is an alteration of talus morphology of the articular facets, the biomechanics of the subtalar joint change, which can lead to pes planus. Three facets are involved in subtalar biomechanics, the anterior, middle, and posterior facets; patients with a separate anterior and middle articular facet have more subtalar stability than other facet configurations. In areas with a high prevalence of pes planus, morphology with fused anterior and middle facets was more common, which may draw a link between talus morphology and pes planus, as well as other conditions such as osteoarthritis of the subtalar joint.[4] 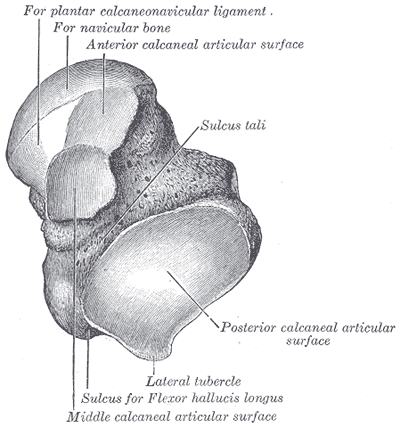 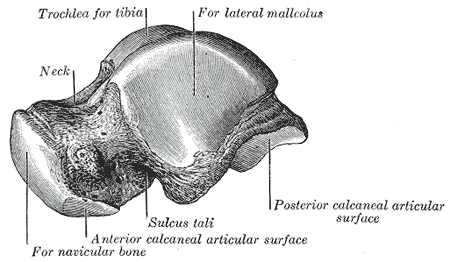 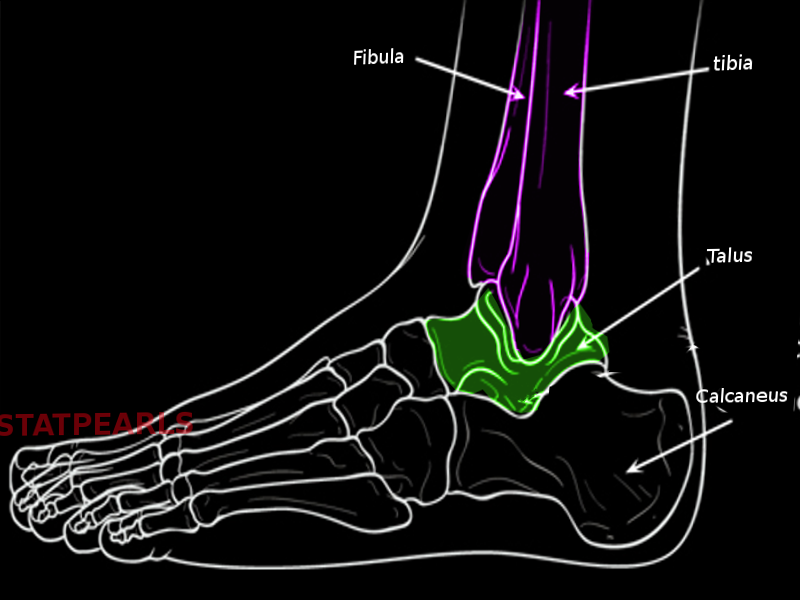 Yammine K, The Morphology and Prevalence of the Deltoid Complex Ligament of the Ankle. Foot     [PubMed PMID: 27807288]

Amaha K,Nimura A,Yamaguchi R,Kampan N,Tasaki A,Yamaguchi K,Kato R,Akita K, Anatomic study of the medial side of the ankle base on the joint capsule: an alternative description of the deltoid and spring ligament. Journal of experimental orthopaedics. 2019 Jan 28;     [PubMed PMID: 30689117]

Godoy HM,Micciche MJ, An Incidental Finding of a Talonavicular and Talocalcaneal Joint Coalition After a Tibial Pilon Fracture: A Case Report. The Journal of foot and ankle surgery : official publication of the American College of Foot and Ankle Surgeons. 2017 Nov - Dec;     [PubMed PMID: 28826785]