Factors that may trigger or exacerbate generalized pustular psoriasis include:

Viral or bacterial infections are common exacerbating factors, reported in 12 of 16 patients with known generalized pustular psoriasis in one series.

The most important drug provocation is by corticosteroids. There is substantial evidence that withdrawal of systemic corticosteroid therapy can precipitate generalized pustular psoriasis, and topical therapy with potent corticosteroids under occlusion has also been implicated. There are reports of the induction of disease on withdrawal of ciclosporin. Other systemic drugs have also occasionally been implicated including terbinafine, propranolol, bupropion, lithium, phenylbutazone, salicylates, and potassium iodide. Coal tar and dithranol may provoke pustulation if applied injudiciously when the disease is unstable.

Many individuals report deterioration at times of psychological stress.

Hypocalcemia may arise as a consequence of generalized pustular psoriasis, but triggering of active disease by hypocalcemia caused by hypoparathyroidism also has been reported.

Pregnancy has been recognized as one of the risk factors.

The incidence peaks between 40 and 59 years of age, but infantile and juvenile cases are also reported. The age at onset tends to be earlier in those with pure generalized pustular psoriasis without plaque psoriasis.

In some published series, women outnumber men in a ratio of about 2 to 1, but this is not consistent in all cohorts.

Inflammatory polyarthritis is common. In one series, one-third of patients were eventually affected. The metabolic syndrome is also frequently associated; in one large series, the reported co-morbidities included obesity (43%), hypertension (26%), dyslipidemia (26%), and diabetes (24%).

Deleterious germline mutations in IL36RN have been reported in familial and sporadic generalized pustular psoriasis in populations from the UK, Germany, Tunisia, Malaysia, China, and Japan. Mutations differ between populations, with evidence of a founder effect; in Europeans the most common mutation in IL36RN results in the substitution p.Ser113Leu, and is present in 0.03% of the healthy European population. Generalized pustular psoriasis patients with IL36RN mutations also are more likely to have the early-onset disease and a systemic inflammatory response.[4][5]

IL36RN encodes the IL-36 receptor antagonist (IL36-Ra), which is expressed primarily in the skin and is the antagonist of three pro-inflammatory cytokines of the IL-1 family (IL-36 alpha, beta, and gamma). These cytokines activate signaling pathways, such as NF-kB and mitogen-activated protein (MAP) kinase, and are interrelated by Th17 cytokines and TNF-alpha. IL-36 cytokines also are overexpressed in the skin of plaque psoriasis, consistent with the concept that abnormal IL-36 signaling has a significant role in establishing cutaneous inflammation but presumably by a different mechanism than in generalized pustular psoriasis. There are occasional reports of mutations in CARD14, particularly in those with coexistent plaque psoriasis.

In acute, generalized pustular psoriasis, there is intense inflammation. The earliest infiltrate is lymphocytic. Intense papillary and epidermal edema cause spongiosis. The arrival of masses of neutrophils leads to spongiform pustule formation (pustules of Kogoj) and abscesses that quickly become macroscopic. There is acanthosis with elongation of rete ridges. The stratum corneum soon becomes a parakeratotic and subcorneal pustule is shed as epidermal turnover is accelerated. Similar features are seen in subacute as in acute patterns but in a less intense form.

In the acute setting, the patient complains of burning sensation in skin associated with some pain, usually without any triggering factor. Fever and general debility accompany the appearance of pustules. A few individuals complain of joint pains.[6][7][8]

Following are the clinical subtypes based on morphology and natural history:

In infants, systemic symptoms are often absent, and the disease may require no treatment. Pustular psoriasis may be limited to flexural areas, such as the neck, for prolonged periods. More severe forms with systemic involvement require active management.

In children, the age of onset is mostly 2 to 10 years. The lesions may be of von Zumbusch pattern, but annular and circinate forms are more common. Attacks may settle within a few days, but relapses with inflammatory episodes may occur. In older children, the disease resembles that in the adult and may take any pattern.

The following laboratory studies will help in the evaluation of the disease:

Generalized pustular psoriasis is treated on the following lines:

The differential diagnosis is that of widespread nonfollicular pustules. In the acute phase, the presence of fever, leukocytosis, and elevated inflammatory markers may lead to a mistaken diagnosis of systemic infection, sometimes leading to a counterproductive discontinuation of immunosuppressive treatment. Acute generalized exanthematous pustulosis is a febrile rash showing erythema and pustules. Histopathology shows neutrophilic exoserosis with intraepidermal or subcorneal pustules, edema of the papillary dermis, as well as neutrophilic and eosinophilic dermal infiltrate. Acute generalized exanthematous pustulosis is triggered by drugs or infections, and generally resolves in two weeks following the triggering factor cessation. Subcorneal pustular dermatosis of Sneddon and Wilkinson is an erythematous and pustular dermatosis of the trunk and intertriginous areas. Its link to pustular psoriasis remains controversial. IgA pemphigus can mimic generalized pustular psoriasis, but histological and immunofluorescence testing will distinguish between them. The wasting, glossitis, and anemia associated with the migratory necrolytic eruption of glucagonoma should allow differentiation.

In the acute phase, the individual is systemically unwell. 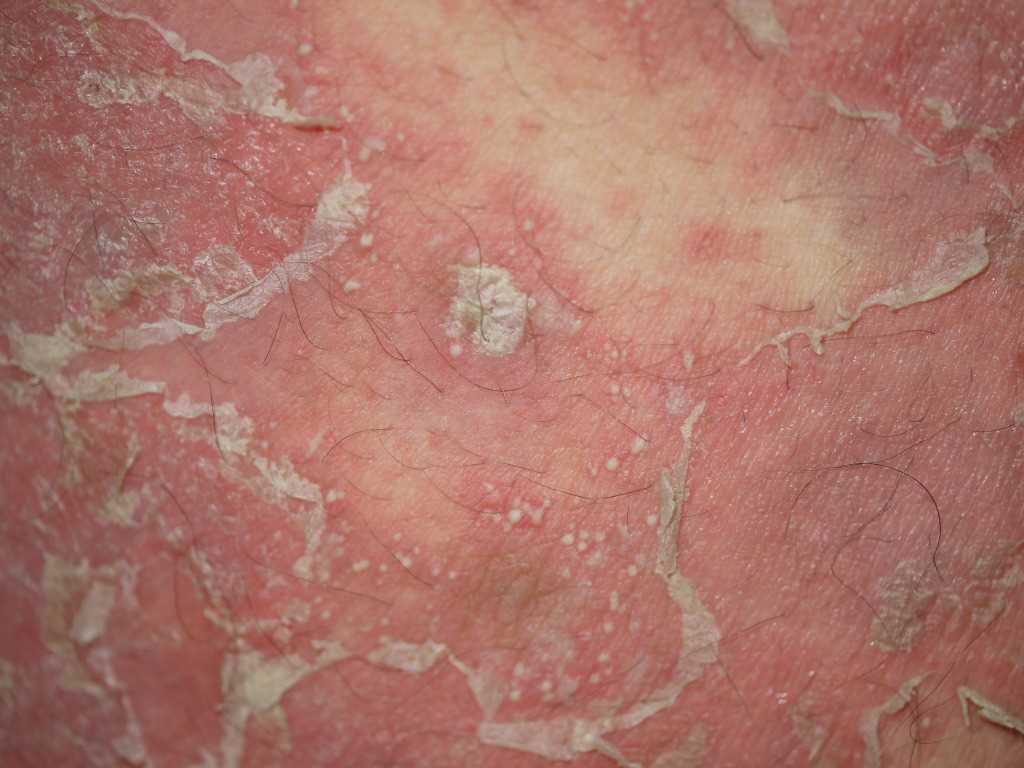