The base of the skull has multiple important foramina that allow the passing of vital tissues, primarily blood vessels and nerves. The two jugular foramina exist at the base of the skull lateral to the foramen magnum. Importantly the internal jugular veins, which drain blood from the brain and intracranial tissues, make their way out of the cranium and terminate at the subclavian veins and ultimately join the brachiocephalic vein.[1] Additionally, cranial nerves IX, X, and XI pass through this foramen, allowing them to send stimuli to multiple extracranial targets.

The jugular foramen is a cavity formed by the petrous part of the temporal bone anteriorly and the occipital bone posteriorly. Its major function is to act as a conduit for essential structures to pass through.

When viewing the skull inferior to superior from an extracranial aspect, the foramina exists lateral to the occipital condyles. Additionally, it sits directly posterior to the carotid canal. Lateral and superior to the jugular foramen sits the external acoustic meatus, which resides within the temporal bone.

The foramen is divided by a fibro-osseous bridge that connects the jugular spine on the petrous part of the temporal bone and the jugular process of the occipital bone into two parts. The anteromedial compartment, the pars nervosa, contains the glossopharyngeal (IX) nerve, Jacobsen nerve, and the inferior petrosal sinus. The pars vascularis contains the jugular bulb, the vagus nerve (X), Arnold nerve, and the spinal accessory (XI) nerve. The pars vascularis is typically larger on the right causing asymmetry of the jugular foramina.[2][3]

The petrous part of the temporal bone and the occipital bone derives from paraxial mesoderm. Both develop via endochondral ossification. As aging and development occur, the bones ossify and form rigid fibrous joints called sutures. Importantly, the joining of these two bones helps create various foramina for vital structures, including the jugular foramen. In rare cases, a persistent primitive artery can cause an abnormal anastomosis between the internal carotid artery and basilar artery.[4] This vestigial artifact can cause symptomatic carotid artery stenosis, as well as provide an avenue for embolic infarction of the brainstem originating from the carotid arteries.[5]

Cranial nerve IX courses laterally and anteriorly away from the superior medulla and exits the jugular foramen. Immediately after it exits, it creates a superior jugular ganglion, and further branches to innervate its target tissues. Cranial nerve IX also briefly enters the carotid sheath at its superior portion, right as it exits the jugular foramen.[8] This nerve's primary target tissue is the parotid gland, where it supplies parasympathetic innervation.

Cranial nerve X courses laterally and anteriorly away from the middle segment of the medulla and exits the jugular foramen. It then extends inferiorly and branches at many levels as it has many connections throughout the body. Importantly, the major descending branch will enter the carotid sheath and run alongside the carotid artery and internal jugular vein.[8] Cranial nerve X has many target tissues, some of which include vocal cords, heart, and gastrointestinal tract up to two-thirds of the way through the transverse colon. Importantly, within the gastrointestinal tract, it contributes to Auerbach's plexus, which is largely a controller of gut motility. It is the major parasympathetic controller throughout the body.

Various muscles are innervated by cranial nerves that exit the cranium via the jugular foramen.

Cranial nerve IX innervates the stylopharyngeus muscle, which plays a role in elevating the larynx, and pharynx, and helps to dilate the pharynx to assist with swallowing.

Cranial nerve X plays a significant role in controlling the heart rate via parasympathetic innervation. Additionally, the nerve has inputs in the intestinal musculature to assist with peristalsis and digestion.

Traumatic injury to the base of the skull may result in a compromise of structures passing through the jugular foramina, which can result in hemorrhage or air embolism due to damage to the jugular vein.[1] Additionally, it could damage the three cranial nerves IX, X, or XI, causing associated issues. Cranial nerve IX damage may result in impaired taste in the posterior one-third of the tongue, as well as cause dysphagia. Cranial nerve X damage can result in a myriad of dysfunctions, including dysphagia, speaking, gastrointestinal issues, and cardiac issues. Cranial nerve XI damage primarily results in muscular pain in the shoulder, and neck, as well as weakness, affecting the sternocleidomastoid and trapezius.[10] 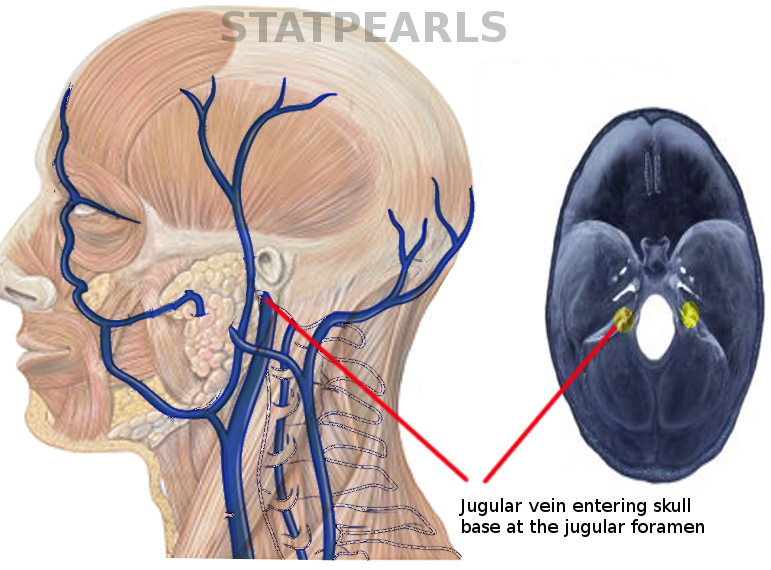 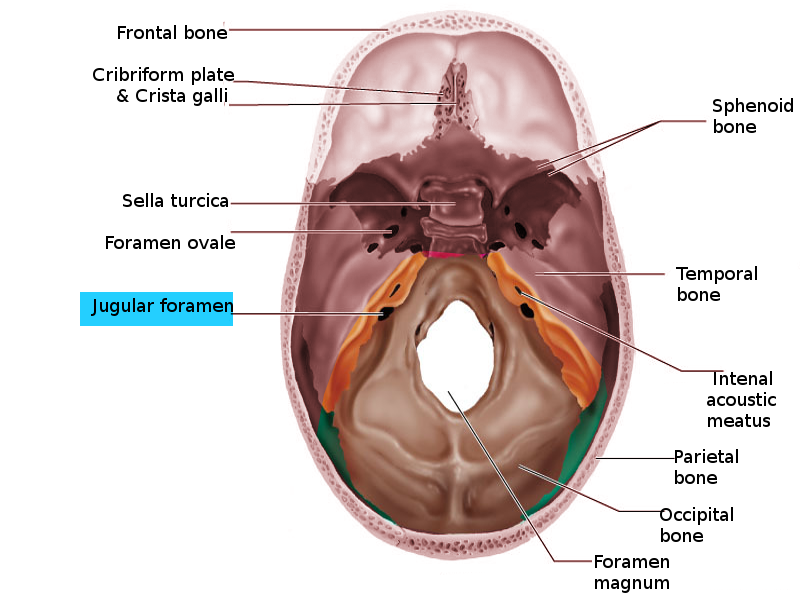 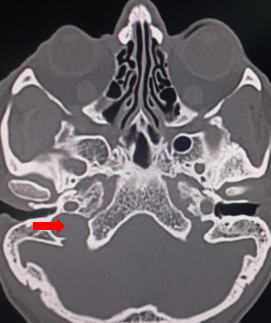 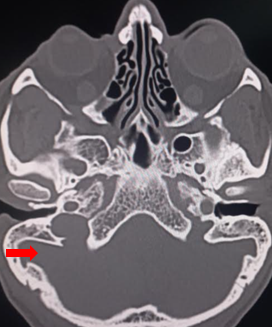 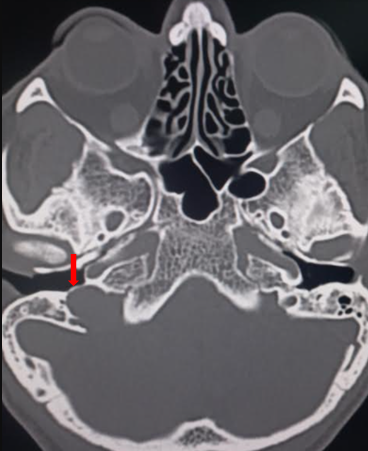