Trench foot is one of three subclasses of immersion foot, which are differentiated by the temperature of the exposure. Trench foot is caused by prolonged exposure to a cold temperature that is usually above freezing and damp, sometimes unsanitary conditions. The condition ultimately causes skin and tissue breakdown which increases the risk of infection and increases associated morbidity and mortality. This activity reviews the evaluation and management of trench foot and highlights the role of interprofessional team members in collaborating to provide well-coordinated care and enhance outcomes for affected patients.

Trench foot is one of three subclasses of immersion foot and is considered a non-freezing cold injury (NFCI). It is often differentiated by the temperature of the exposure and is caused by prolonged exposure to cold but usually not freezing, damp, and sometimes unsanitary conditions. The condition will ultimately cause skin and tissue breakdown which increases the risk of infection and raises the morbidity and mortality.[1][2][3]

Many soldiers during World War I had trench foot. Starting in 1914, trench warfare was a common strategy on the European front. During this time, the soldiers found themselves standing in waterlogged trenches at the front for long periods of time and were subjected to wet, cold, and muddy conditions. In the winter between 1914 and 1915, it is reported that over 20,000 British troops were treated for trench foot.  Furthermore, it is estimated that trench foot contributed to the deaths of 2000 American and roughly 75,000 British soldiers. Interestingly, trench foot was first described in 1812 while Napoleon’s army was retreating from Russia. Dr. Dominique Jean Larrey, a French army surgeon, was the first clinician to describe the condition. Although the prevention of trench foot is relatively straightforward and widely known, as recently as 1982, the British Army dealt with the condition during the Falklands War.[4][5][6]

Military personnel continue to be most commonly affected population [7]. Recently, clusters of cases have been described in the civilian population during large, multi-day, music festivals where the conditions are conducive to causing the disease. In everyday clinical practice, the homeless population is also susceptible to trench foot due to lack of shelter and prolonged exposure to moist and cold environments.

Unlike frostbite, trench foot can occur without freezing temperatures. The feet can be affected in temperatures up to 16 C (60 F), and the disease can develop in as little as 10 to 14 hours.[8] With the addition of moisture to the above environmental conditions, destruction and deterioration of the capillaries can lead to degradation of the surrounding tissue. The pathophysiology is thought to be due to varying vasoconstriction and vasodilation resulting in local tissue damage.[9] Hyperhidrosis (excessive sweating) can also be a contributing factor to the development of trench foot.

Trench foot often begins with a tingling, itching that can progress to numbness. In the setting of cold exposure, vascular changes resulting in poor blood flow can result in the feet becoming erythematous or cyanotic. In later stages as the extremity is rewarmed hyperesthesia is often noted.[10] With prolonged exposure and poor care they may have an odor of decay if necrosis has started to set in. Significant swelling can occur, and there are some descriptions that the feet can double in size due to the edema. The disease has been known to commonly affect the heels or toes, but can extend above the foot. The skin can appear blotchy, and as the disease progresses, blisters and open sores can occur which can lead to fungal as well as bacterial infections. As the disease continues to advance, skin and tissue may slough off.  If the condition is left untreated, gangrene can set in. At this point, amputation may be needed to avoid further progression of the disease and other complications such as sepsis and death. When trench foot is identified and treated early, complete recovery is expected; although, there can be a significant amount of temporary pain when sensation returns to the affected area.

The diagnosis of trench foot is entirely clinical. One must first identify the situations where it occurs, and a good physical examination is paramount. Underlying infections must be ruled out so a white blood cell count might be indicated. Inflammatory markers such as a C-reactive protein (CRP) or erythrocyte sedimentation rate might prove helpful, as will a radiograph or bone scan if underlying osteomyelitis is suspected.

By keeping the feet warm, dry, and clean, trench foot can be avoided. During World War I, the institution of regular foot inspections was found to decrease the incidence of the disease. The soldiers were paired up and were instructed to watch the feet of their partner. It was found that a soldier was more likely to remove his boots and dry his socks and feet if he was reminded to do so by his fellow soldier. After thousands of cases were seen, soldiers were ordered to have 3 pairs of socks with them at all times and were told to change rotate the pairs at least twice a day.   Whale oil was also provided to the soldiers to rub on their feet after they were dry to help prevent trench foot. Historically, a battalion (up to 1000 men) at the front in World War I, could use up to 10 gallons of whale oil on any given day. To help prevent trench foot, wooden boards, known as duckboards, were used to cover the wet, muddy, cold ground in the trenches. Troop rotation was also used to limit an individual soldier’s exposure. As World War I progressed, the incidence of the disease declined due to the measures mentioned above.[11][5][12]

The best treatment for trench foot is prevention. Some of these methods are outlined above. It was critical that soldiers changed their socks frequently and made sure their feet were dry to avoid the condition. During World War I, as the understanding of the disease progressed, the treatment of trench foot also evolved. Early on, bedrest was recommended, and the application of numerous different agents was tried at one time or another. Among these included a mixture of lead and opium, alcohol of different types, mercuric chloride in alcohol, tincture of iodine, oil of wintergreen, picric acid, and chloral hydrate mixed with camphor. Some powders were also used including boric acid, starch, zinc, and salicylic acid. Radiant heat, complex methods of massage, and even different types of electrical stimulation were tried in treating trench foot when the initial treatments failed. However, once the disease progressed to a severe case, the mainstay of treatment was surgical, similar to the treatment of gangrene. Many times, the patient ended up with an amputation.[13]

Current treatment recommendations are with slow passive rewarming of the affected extremity with adequate pain control with amitryptiline or other modalities for neuropathic pain.[10][8] It is important to assess for signs of hypothermia and to remove the affected extremity from any inciting environmental causes.

A good history and physical should allow a clinician to differentiate trench foot from frostbite, cellulitis, and other localized processes.

Today, trench foot is usually identified early, and the treatment is very straightforward. Keeping the feet dry and warm is imperative. Rest and elevation of the affected foot are encouraged since this will help prevent new wounds and blisters. NSAIDS will help with any discomfort the patient is having and will also help to alleviate the swelling. If the patient cannot take NSAIDS, then acetaminophen or aspirin will help with the pain but may not help with the swelling. According to the Center for Disease Control and Prevention (CDC), the prevention and treatment of trench foot are straightforward, and their recommendations are as follows:

If the above measures do not help the condition, then the CDC recommends further evaluation by a clinician.

Complications and uncommon and typically the result of inappropriate care. Soft tissue skin infections such as cellulitis or gangrene are possible in later stages of presentation and should be managed with appropriate antibiotics or antifungal treatments. Subacute or chronic neuropathic pain is more common and can be managed with various modalities to treat neuropathic pain.[8] In rare circumstances and if not managed/treated appropriately permanent sensory changes may be seen and or amputation may be required.

Patients should be educated in the identification of non-freezing cold injuries and associated risk factors. Recommendations should include smoking cessation, proper hydration and proper foot care as outlined above. Patients should also be instructed to avoid alcohol, vasoconstrictive medications and caffeine. [14]

Trench foot is usually managed by an interprofessional team that consists of an emergency department physician, nurse practitioner, vascular surgeon, internist, orthopedic surgeon and an internist. Once the diagnosis is clinically made, the treatment is urgent. The foot must be kept warm and dry. Many oils have been recommended to protect the skin and underlying tissues but no evidence supports the use of one treatment oil over another. If the foot is warm, talcum powder can be used. Radiant heat can be used to keep the foot warm. Since the skin is fragile, manipulation and massage should be avoided. The foot should be regularly assessed for infection and gangrene. Recovery occurs in most mild cases, but it is prolonged. In severe cases of trench foot, amputation may be the only option. [15](Level V) 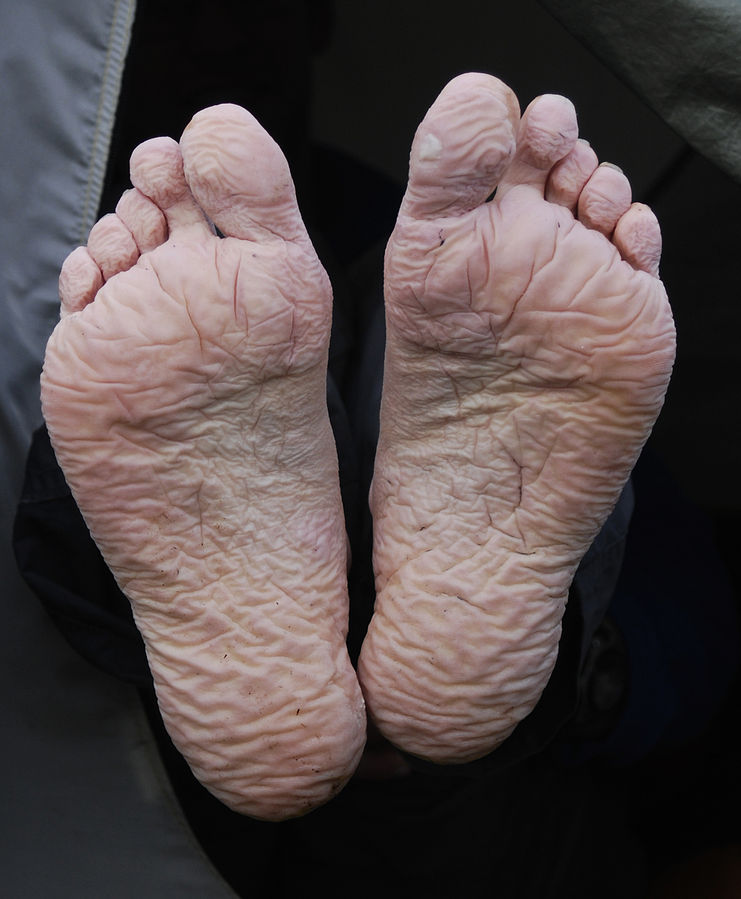 Forbes KE,Foster P, An unusual case of an immersion hand presentation in a military signaller operating in the jungle in Belize. Journal of the Royal Army Medical Corps. 2017 Dec;     [PubMed PMID: 28794010]