A non-surgical approach is the first line of treatment, including appropriate plaque control and discontinuing or changing the inducing drug. In the recent years azythromicin has gained a lot of attention due to its capacity to improve gingival overgrowths in patients taking cyclosporin A, avoiding the need of changing the drug to another agent. Surgical management comes in play only when medical treatment is unsuccessful, however, recurrences are common and the results last for usually twelve months.[2]

Drugs are the most common reason behind gingival enlargements. DIGO is a side effect seen in patients taking anticonvulsants, immunosuppressants, or calcium channel blockers. It is associated with the patient's genetic predisposition and the presence of existing plaque or gingival inflammation.[3]

Phenytoin (PHT, or 5,5-diphenylhydantoin), sodium valproate, phenobarbitone, vigabatrin, primidone, mephenytoin, and ethosuximide are some of the drugs that cause gingival hypertrophy. However, phenytoin is the anticonvulsant most associated with gingival enlargements.[4] It is used to treat temporal lobe, tonic-clonic, and psychomotor seizures.[4]

At times, multiple anticonvulsants are given together, acting synergistically and aggravating the condition.

Immunosuppressants are prescribed after organ transplantation to prevent organ transplant rejection, such as renal transplants, and treat some autoimmune diseases, like rheumatoid arthritis.[4]

Cyclosporin, sirolimus, and tacrolimus are immunosuppressants linked to gingival enlargement. Cyclosporin is the most frequently prescribed immunosuppressive drug after an organ transplant, and the incidence of gingival overgrowth has been found in nearly 53% of patients taking cyclosporin after renal transplants.[5] Tacrolimus, on the other hand, is less toxic than cyclosporin, causing less severe gingival overgrowth, hepatic and renal toxicity.[6][7][6] Sirolimus is another immunosuppressant that has shown a predisposition to gingival enlargement.[8][9][10][8]

Renal transplant patients taking immunosuppressants like cyclosporin show a greater propensity to develop gingival hypertrophy when put on nifedipine or diltiazem. However, the extent of hypertrophy is more significant with cyclosporin.[4] Combinations of these drugs could act synergistically, causing exaggerated hypertrophy of gingival tissue.

Drug-induced gingival overgrowth is most commonly seen in male children and adolescents, with a most prevalent location in the anterior gingival tissue. The genotype of the individual have an effect on the development of DIGO,[12] and the extent and degree of overgrowth depend on the drug. Phenytoin, cyclosporin, and nifedipine are the most common causes of gingival overgrowth, and phenytoin has the highest prevalence of all. It is estimated that 50% of adults treated with phenytoin experience gingival enlargement, 30% with cyclosporin, and 20% with nifedipine.[13]

In 1996, Seymour et al. postulated the theory of genetic predisposition for the etiopathology of DIGO.[3][14] This is substantiated because some individuals develop gingival overgrowth and some do not whilst on the same drug. The usual inflammatory response of gingival fibroblasts and subsequent proliferation of connective tissue matrix emphasizes the heterogenetic character of the individual’s gingival fibroblasts in response to the inducing drugs.

The common mechanism of action at the cellular level of all these three categories of dissimilar drugs appears to be inhibition of cation influx, particularly sodium and calcium ions. Gingival overgrowth is multifactorial.[14][15][4] Bacterial plaque appears to be a contributory factor, and the severity of gingival overgrowth is directly proportional to the degree of plaque buildup and plaque-induced inflammation. Decreased cation dependant folic acid (FA) active transport within gingival fibroblasts causes reduced FA uptake by the cells, causing changes in the metabolism of matrix metalloproteinases and inability to activate collagenase. This results in an accumulation of connective tissue and collagen due to a lack of collagenase.

Inducing drugs act as a trigger for the activation and proliferation of gingival fibroblasts, causing an increased production of GAGs (glycosaminoglycans) in the connective tissue. These drugs decrease cellular uptake of folate by genetically predispose fibroblasts. Reduced intracellular folate translates into a decrease in the synthesis or activation of MMPs (matrix metalloproteinases), which are required to convert inactive collagenase to active collagenase, allowing an excess of connective tissue build up. Brown et al. (1991) postulated that bacterial plaque contributes to gingival inflammation, which completes the vicious cycle.

These are more than 20 enzymes that bring about the degradation of connective tissue and tissue remodeling. These include collagenases, gelatinases, and stromelysins. Inhibition of activation of these can result in the accumulation of extracellular matrix and collagen and cause DIGO.

Fugi and Kobayashi (1990) reported inhibition of Ca2+ uptake within gingival fibroblasts by PHT and several calcium channel blockers (CCBAs). Thomas and Petrou (2013) reported a reduction in Na+ channel availability and, therefore, a decrease in the action potential amplitude. This causes reduced Ca2+ entry, and a decrease in Ca2+ activated K+ channels. All three types of DIGO-inducing drugs act on Ca2+ flux similarly.

The concentrated drug in crevicular gingival fluid or bacterial plaque exerts a direct toxic effect on the gingival tissue. Dental plaque induces inflammation, which causes gingival overgrowth. Inflammation causes the upregulation of transforming growth factor-beta 1 (TGF-beta 1). Hence, control of dental plaque is needed in the treatment and prevention of DIGO over time.

In DIGO, the pathological changes lie in the connective tissue and not the epithelial cells of the gingiva. There is an excessive accumulation of extracellular matrix-like collagen with varying amounts of inflammatory infiltrates, predominantly plasma cells. Fibroblastic proliferation may not be evident. Erratic columns of collagen fibers are seen interspersed with penetrating epithelial ridges.[4]

Patients with DIGO will report a past medical history of hypertension, angina, epilepsy, or recent organ transplant. They typically present with gingival enlargement, pain during mastication, and cosmetic disfigurement one to three months after starting treatment with one of the drugs associated with the disease.[4] The gingival enlargement caused by the drug makes oral hygiene challenging, leading to increased plaque accumulation, resulting in secondary inflammation.[16]

The diagnosis of drug-induced gingival overgrowth is made by clinical examination and the patient's past medical history.

The aim of treatment in DIGO is to alleviate the patients' discomfort, enabling them to do simple acts like eating and chewing pain-free, treat the inflammation, reduce the swelling, and give a better cosmetic appearance to the gingiva.

The modalities of treatment are medical and surgical. Medical management is the first line of therapy, whereas surgery is reserved for recurrences or cases that persist despite good medical treatment.

Discontinuing or changing the medication must be placed under consideration.[18][13] An alternative to phenytoin includes carbamazepine and valproic acid, which have shown a lower rate of gingival enlargement. Diltiazem and verapamil exhibit a lower prevalence of gingival enlargement compared to nifedipine. Cyclosporin substitution is more complicated because there are limited options available. Cyclosporin can be substituted by tacrolimus, and the use of azithromycin in combination with cyclosporin has shown a decrease in the severity of DIGO.[19]

Plaque control should be the first step in the treatment of DIGO, correct oral hygiene, and professional plaque removal, including tooth surface cleaning and periodic scaling.[20][21]

Control of inflammation, including non-steroidal anti-inflammatory agents, antibiotics to control infection, and topical antifungal medication like nystatin, may also be utilized. Folate supplementation has also been used.[22]

A sufficient period of six to twelve months should be allowed to elapse after discontinuing the inducing drug before surgery is considered.[19]The surgical methods include gingivectomy and periodontal flap surgery. Electrocautery may be used in difficult cases, children, or where the gingiva is fragile and likely to bleed. The CO2 laser has a wavelength of 10600 nm; hence, it is readily absorbed by water and is effective in the surgery of soft tissues with high water content like the gingiva. Blood vessels up to a diameter of 0.5 mm can be sealed effectively and provide a dry field for better visibility of the surgical field. A laser is preferred over the scalpel as it has strong bactericidal and hemostatic effects.[20][2]

The Role of Azithromycin in Cyclosporin Induced Gingival Overgrowth

In the last decade, researchers have found that azithromycin can help to reverse gingival overgrowth caused by cyclosporine A in renal transplant patients.[23] Interestingly, azithromycin does not alter the cyclosporin A blood levels or the renal function, avoiding the need of changing this drug to another anticonvulsant due to DIGO.[23]

The effect of azithromycin on cyclosporine A-induced collagen turnover and cell proliferation was studied by Kim et al. They concluded that azithromycin: inhibits the proliferation of human gingival fibroblasts, and collagen accumulation - both induced by cyclosporin A – activates MMP-2 in renal transplant and normal fibroblast, inhibits mRNA levels of type 1 collagen and rises levels of MMP-2.[23]

A thorough history, physical examination, and investigations, including biopsy, may be required to confirm the etiology in all these conditions.

If the medication inducing the gingival overgrowth can be changed to a drug that is less associated with this complication, the gingival tissue may return to normal with the aid of adequate plaque control. The gingival enlargement can persist, despite drug substitution and good plaque control, and in this case, surgical management to restore normal gingival contours is required. These modalities of treatment, although effective, do not always prevent the recurrence of the enlargement. DIGO recurrence in surgically treated cases may appear as soon as three to six months after the procedure. In general, the results last for at least twelve months.[2]

Some studies indicate that bacterial plaque is a prerequisite for the disease to occur. On the contrary, others believe that the presence of dental plaque is a consequence of the difficulty that the gingival enlargement represents to dental hygiene, which then exacerbates the severity of the overgrowth.[2] In any case, one thing is certain: bacterial plaque plays an essential role in developing DIGO, and patients must be educated about adequate dental brushing and flossing techniques that may be accompanied by chlorhexidine gluconate rinses to control the levels of bacterial plaque. Regular appointments with their dentist must be accomplished to perform professional cleaning of the teeth. These measures can prevent or decrease the rate and the degree to which recurrence occurs.

Since the condition is entirely drug-induced, patient education about the side effects of the implicated drugs before starting treatment is warranted, and the importance of good dental hygiene should be emphasized [2]. Drug-induced gingival enlargement has a good prognosis and is generally reversible on stopping or substituting the offending drug. An interdisciplinary approach is needed as the primary clinician, the dentist, and the healthcare team should work together to address the patient's signs and symptoms adequately [Level V]. 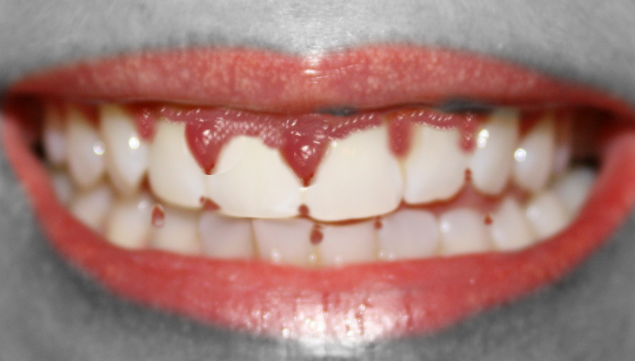 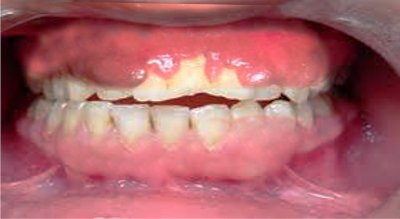