It is a small irregular shaped structure; its shape varies from pinhead, irregular, oval to rectangular. It is situated approximately 1 cm in front of the medial end of the superior orbital fissure. Here it is embedded in orbital fat and is connected to the nasociliary nerve. It is a collection of multipolar neurons. Three roots of the ciliary ganglion are attached to its posterior border. These roots are motor root, sensory root, and sympathetic root.

The sensory root derives from the nasociliary nerve. Sensory fibers from eyeball pass through ganglion uninterrupted. It carries general sensations from the cornea, iris, and ciliary body.

The autonomic nervous system develops from neural crest cells. Precursors of Schwann cells are multipotent cells derived from the neural crest. Precursors of Schwann cells generate Schwann cells, neuroendocrine cells, autonomic neurons, melanocyte, and some other cells. Neural crest cells of the mesencephalon and metencephalon junction contribute to the development of ciliary ganglion.Before the closure of neural tube closure, neural crest cells migrate from midbrain and hindbrain junction. In neural tube, neurons arrange in two lamina- basal lamina and alar lamina. Neurons of the basal lamina are motor in nature and from lateral to medial side arranged in three columns named as somatomotor (somatic efferent), branchio-motor (special visceral efferent) and visceral-motor ( general visceral motor). The dorsal nucleus of the vagus nerve, the inferior salivatory nucleus of the glossopharyngeal nerve, the superior salivatory nucleus of facial and Edinger-Westphal nucleus of oculomotor represent viscera-motor component of the cranial nerve. Viscero-motor component of the cranial nerve is associated with parasympathetic ganglions, and from these nucleus preganglionic parasympathetic fibers of concerned ganglion originates. Folic acid deficiency, infections, exposure to the teratogen, mutation during the early embryonic period can lead to the defect in the development of neural tube, facial defects, ocular defects, etc..[4][5][6][7]

As mentioned above sphincter pupillae and ciliaris muscles are supplied by the short ciliary nerve.

A study conducted by Janet M et al. examined the variation in receptor density and area among neurite-associated acetylcholine receptor patches (NARPs) induced by chick ciliary ganglion neurons on nearby myotubes in vitro. In this study variation in NARP size and intensity reflects regional variation in the ability of myotubes to respond to the neuronal influence because no gradient in NARP size or intensity with distance from the soma was evident; the intensities and areas of uninnervated receptor clusters (hot spots) were similar to those of NARPs; acetylcholinesterase was present at the same proportion of hot spots and NARPs at all times examined.[10]

The ciliary ganglion can get injured during surgical management of trauma of lateral wall of the orbit, space-occupying lesions of orbit, cavernous sinus angiomas like conditions. Due to its proximity, it can easily get affected by optic or nasociliary neuromas.[11]

During eye surgeries, the clinician gives a peribulbar block above and below the orbit. In this block, ciliary nerves, oculomotor nerve, trochlear nerve get blocked, but the optic nerve is not affected.

Ciliary ganglion lesions lead to mydriasis or tonic pupil. In this condition, the pupil is non-reactive to light and slowly accommodating. Adie syndrome or Holmes Adie syndrome is a condition caused by a bacterial or viral infection, and it leads to inflammation and damage of ciliary ganglion. In this condition, the pupil is tonically dilated and slowly reacting to light, but a definite response to accommodation is present.[12] In this disease, there is a sudden denervation of the ciliary body. The re-innervation process is slow. It is usually associated with loss of deep tendon reflex.

In addition to Adie syndrome, a tonic pupil can result from other conditions like Ross syndrome, diabetic neuropathy, infection of ciliary ganglion like  Herpes zoster virus infection, trauma to the ciliary ganglion, damage to the short ciliary nerve, intra-orbital tumors, damage to Edinger Westphal nucleus, etc. 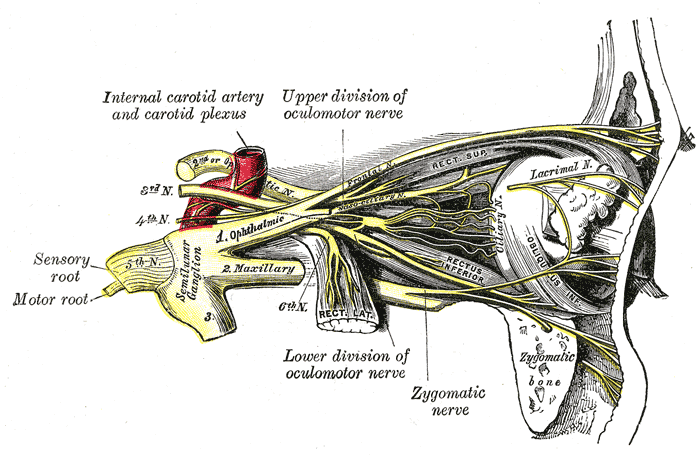 The Trigeminal Nerve, Nerves of the orbit and the ciliary ganglion; Side view
Contributed by Gray's Anatomy Plates