There is a slight female predominance. It is seen more commonly in the 30s and 40s.

Skin biopsy should be done to include the border of the lesion. A column of parakeratotic cells is seen correlating to the raised border. This column is called the cornoid lamella. The granular layer underneath this column can be thin or not present. There is also dyskeratosis in the epidermis under the cornoid lamella. Spongiosis can be present.

Lesions appear as asymptomatic or pruritic annular erythematous or brown circular macules, papules, or plaques with a raised hyperkeratotic border surrounding the lesions. It can occur bilaterally. Lesions most commonly present in the third or fourth decade and occur in areas exposed to sunlight. The legs, forearms, shoulders, and back are the areas most commonly affected. The face can rarely be involved. The palms and soles are spared. Disseminated superficial actinic porokeratosis usually worsens when it is exposed to sunlight, and pruritus can intensify.[5]

Treatment options include the following.

Diclofenac is an NSAID that inhibits COX-2. The medication was approved for actinic keratosis and has been used to treat disseminated superficial actinic porokeratosis with variable results. It has a good safety profile.

Ingenol mebutate is used in the treatment of actinic keratosis and can be used for disseminated superficial actinic porokeratosis lesions. It can help with the hyperkeratosis but not the atrophy or hypopigmentation.

Vitamin D3 analogs have shown good responses after being used for 6 to 8 weeks. Vitamin D3 analogs are known to induce the transcription of genes that are responsible for the differentiation and proliferation of the keratinocytes.

5-FU inhibits thymidylate synthase and stops DNA synthesis, therefore, inhibiting fast proliferating cells. Its use results in a very severe and robust inflammatory reaction in some patients, including erythema, ulcerations, and dermatitis. The clinical response is usually temporary.

Imiquimod works by recruiting the body's immune cells through activation of toll-like receptors 7 and 8 and the induction of cytokines. It has been used mostly for porokeratosis of Mibelli and porokeratosis palmaris et plantaris. It can induce an inflammatory response similar to 5-FU.

Cryotherapy, excision, curettage, and dermabrasion have been shown to have some good responses. It is, however, limited and is not used for extensive disease. Cryotherapy leaves a scar, and recurrence is common.

Carbon dioxide (CO2), Q-switched ruby (QSRL), Neodymium:yttrium-aluminum-garnet (Nd:YAG), fractional photothermolysis (FP) lasers, and Grenz ray have been used to treat Disseminated superficial actinic porokeratosis. The carbon dioxide laser uses pulsed or scattered infrared light with wavelengths between 9.4 micrometers and 10.6 micrometers and works on the water inside cells. Vaporization of the liquid causes tissue destruction. Its use can leave hyperpigmentation. QSRL uses melanin as its target. It reduces hyperpigmentation but does not destroy the cornoid lamella. It has greater penetration than Nd:YAG. Nd:YAG laser is used at 532 nm for pigmented lesions. It removes the superficial papillary dermis. It was shown to decrease the hyperpigmentation and obliteration of the cornoid lamella. FP induces small zones of thermal necrosis that doesn't create too much damage, redness, or pain and allows for faster healing. Grenz ray uses electromagnetic radiation like x-rays. It inhibits proliferation by inhibiting DNA synthesis.[7]

Medications that suppress the immune response, such as topical corticosteroids, are not usually effective because disseminated superficial actinic porokeratosis is not an inflammatory disease, but using these medications can help with the associated pruritus.[8][9][10][11][12]

An interprofessional team best manages superficial actinic porokeratosis. Primary care providers should refer patients to dermatologists if the diagnosis is in doubt or for some treatments. Oncologists and transplant physicians should be vigilant and have a high level of suspicion for this diagnosis. Clinicians should be aware that superficial actinic porokeratosis is a premalignant lesion, and patients should be advised to avoid the sun and tanning spas. Anytime there is a change in lesion characteristics, a biopsy is recommended.  Pharmacists educate patients about medications, check for drug-drug interactions, and monitor for compliance. [Level 5] 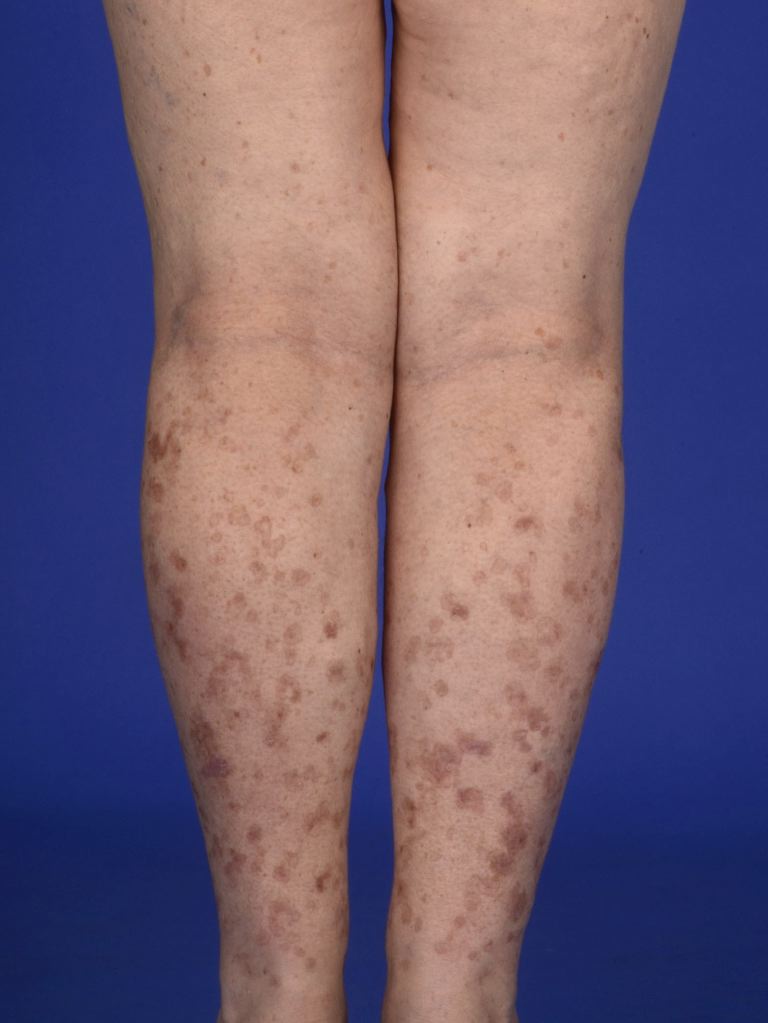