The hyoid bone (hyoid) is a small U-shaped (horseshoe-shaped) solitary bone, situated in the midline of the neck anteriorly at the base of the mandible and posteriorly at the fourth cervical vertebra. Its anatomical position is just superior to the thyroid cartilage. It is closely linked with an extended tendon-muscular complex but not specifically interconnected to any adjacent bones and hence is considered by many anatomists and anthropologists to be an unconventional bone. It is anchored in the anterior triangle of the neck by muscles from the larynx, pharynx, tongue, and the floor of the mouth. The name hyoid derives from the Greek word “hyodeides,” which means “shaped like the letter Upsilon.” Although dubbed as an unconventional bone, the hyoid being a part of the hyoid-larynx complex is indeed a bone of clinical and forensic significance.

The hyoid takes part in all possible functional actions of the orofacial complex. It preserves the patency of the airway between the oropharynx above and tracheal rings below. It also connects to the larynx and hence plays a role in phonation. Other functions include tongue movement, mastication, swallowing, prevention of regurgitation, and even respiration.[1][3] Furthermore, the hyoid maintains the posture of the head, due to the complex connection it presumes between the mandible and the cervical spine.[1]

The second pharyngeal arch forms the lesser horn (cornu) and the upper body of the hyoid, while the greater horn (cornu) and the lower portion of the body derive from the third pharyngeal arch. This embryonic development of the hyoid remains controversial.[1] The ossification of the greater horns occurs toward the end of the normal gestational period of the fetus; this is followed by the ossification of the body of the hyoid soon after birth. Eventually, ossification of the lesser horns occurs during the first or second year after birth. Later in adulthood, normally the horns fuse with the body, but this may not take place in all individuals. The hyoid is situated anterior to the second and third cervical vertebra during infancy, and ultimately in adulthood, it descends to the level of the fourth and fifth cervical vertebra. The descent takes place simultaneously with the other functionally relevant structures including the epiglottis and the larynx.[3]

The hyoid functions as an anchor for the suprahyoid muscles (digastric, stylohyoid, mylohyoid and geniohyoid) as well as the infrahyoid muscles (sternohyoid, sternothyroid, omohyoid, and thyrohyoid).[2] The stylohyoid ligament suspends the hyoid from the temporal styloid process on either side. It is restricted by the ligamentous attachments inferiorly to the superior aspect of the thyroid cartilage through the thyrohyoid membrane. Additionally, the hyoid is attached to the cervical spine posteriorly via the cervical fascia.[1]

Other Muscles Related to the Hyoid

The hyoglossus and the middle pharyngeal constrictor originate from the hyoid. These muscles do not form the group as mentioned above of muscles related to the hyoid.

Elevation of the Hyoid

The digastric, stylohyoid, mylohyoid and geniohyoid function in elevating the hyoid.

Depression of the Hyoid

The hyoid shows a wide range of anatomical variations, most likely owing to the asymmetry of the greater and lesser horns. Therefore, the hyoid is considered one of the most polymorphic parts of the human body. The commonest variation of the hyoid takes place in the process of ankylosis of the joints between the horns (greater and lesser horns) and the body of the hyoid. Ethnicity, sex, age, height, and weight of the subject contribute to the morphological variations. These variations can happen unilaterally, bilaterally, and multiple variations can occur in the same individual.[2] Surprisingly, the absence of the hyoid has been reported as well in a male neonate who was also a teratoma case, had a mandibular cleft, and suffered from respiratory distress.[5] These anomalies correlate to some clinical conditions such as micrognathia, Pierre Robin sequence, and cleft lip and palate. Symptoms caused by these anomalies include dysphagia, neck movement limitations and foreign body sensation in the throat.[2]

The Hyoid and its Relation to Blood Vessels

The Hyoid and its Relation to Nerves

Obstructive sleep apnea is a chronic sleep-related breathing disorder. It is best described by repeated narrowing and obstruction of the pharyngeal airway during sleep.[7] This condition is caused by pharyngeal collapsibility, which is due to the loss of wakefulness stimulus and changes in the neuromuscular control. Several factors contribute to the pharyngeal collapsibility; the hyoid position is one of these factors. An imbalance between the suprahyoid and infrahyoid muscles may lead to alteration in the position of the hyoid, thus affecting the airway patency and causing more pharyngeal collapsibility.[8] The clinical manifestations include non-refreshing sleep, daytime sleepiness, fatigue, nocturia, irritability and morning headache. If left unmanaged, it may lead to many complications, including cardiovascular diseases, cognitive impairment, and decreased productivity and concentration, which may lead to road traffic accidents.[7] The treatment of choice is the nasal continuous positive airway pressure; if unsuccessful, other options include oral devices, positional therapy,[9] upper airway surgery such as genioglossus advancement,[10] hyoidothyroidopexy (hyoid suspension),[11] hyoid myotomy and sliding genioplasty.[10]

Hyoid bone insertion tendinitis is also known as hyoid bone syndrome. Patients describe it as neck pain that increases with swallowing and movement of the neck. The pain is characteristically either dull or sharp, radiating to the temporal area, posterior pharyngeal wall, sternocleidomastoid muscle, ear, and supraclavicular region. On examination, tenderness over the greater horn of the hyoid is noted upon palpation. The condition is diagnosed mainly by history and physical examination. Imaging may be used to exclude the other differential diagnoses. Medical therapy is the initial treatment of choice. It includes topical and systemic non-steroidal anti-inflammatory medications, local anesthetics and steroid injections. If medical therapy fails, then surgery is the next consideration.[12]

Forensic Anatomy of the Hyoid

The forensic profile of the hyoid related to forensic anthropology primarily includes estimation of age and determination of sex. Fusion of the hyoid is especially useful to predict age in adulthood. The bone density of the hyoid is a valuable predictor of both age and sex [3]. However, it is worth noting that the literature reports a wide range of variability in the degree and timing of fusion of the greater horns with the body of the hyoid. Using discriminant function analysis, various metric measurements of the hyoid are found to be useful in determining the sex of the bone.[17]

The damage commonly affects the greater horns or the region between the body of the hyoid and the horns. Injuries are mainly in the form of vertical or oblique fractures. Displacements of the fracture segments are also observed. Bilateral fractures of the hyoid and double fractures of one of the greater horns are not uncommon.[18] The frequency of a fractured hyoid is more in cases of strangulation in comparison to cases of hanging. However, a hyoid fracture is present in only about a third of all homicides from strangulation.[19] Therefore, it merits noting that an intact hyoid does not always rule out strangulation as the underlying cause of death. The hyoid is fractured more commonly in the older victims of strangulation and is less likely to occur in younger victims of strangulation in the age group 20 to 40.[19] The differences in the age-related frequency of hyoid fracture are dependent on the degree of ankylosis of the hyoid that progresses with age. The mobility in the region of the junction between the greater horns and the body of the hyoid should not be mistaken for a fracture. 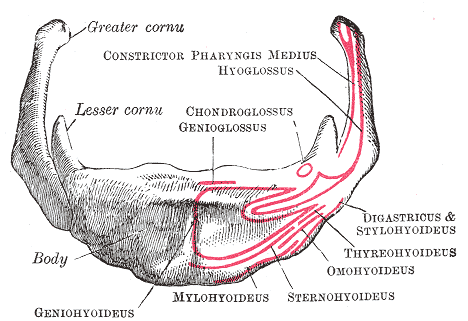 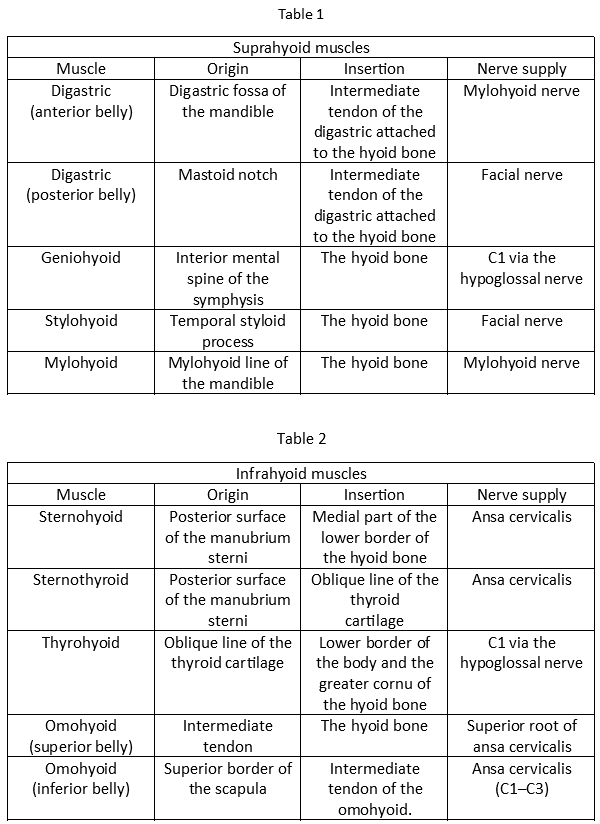