The vertebral column, or spine, is composed of 33 vertebrae. These vertebrae play an essential role in protecting the spinal cord and the spinal nerves. They serve as a support for the head, neck, thorax, abdomen, and pelvis, while also allowing for flexibility and mobility through the presence of intervertebral discs and facet joints without compromising their supportive function.

The spine consists of multiple segments. These are the:

The sacrum is made of five fused vertebrae configured as an inverted triangular bone that is concave anteriorly and convex posteriorly. Within the sacrum lies the sacral canal, which is a continuation of the vertebral canal. It terminates as the sacral hiatus. Though the spinal cord ends in the lumbar region (L1-L2), the dura mater extends to S2.[1] Also contained within the canal is the filum terminale, a ligament that extends from the conus medullaris and attaches to the base of the coccyx, thus serving as an anchor for the spinal cord. Four bilateral sacral foramina can be appreciated both anteriorly and posteriorly, which give rise to the S1-S4 spinal nerves.

The superior aspect of the sacrum, referred to as the sacral promontory, articulates superiorly with the L5 vertebral body of the lumbar spine. This arrangement forms the lumbosacral joint, which is reinforced by iliolumbar and lumbosacral ligaments.

The inferior aspect of the sacrum articulates with the coccyx via the sacral and coccygeal cornua.

The anterior aspect of the sacrum is less coarse than the posterior aspect. Once the fusion of the sacral vertebrae is complete, four transverse ridges can be appreciated. These ridges represent the remnants of the fused intervertebral discs. The sacral promontory projects anteriorly, forming the posterior ridge of the pelvic inlet. The remainder of the pelvic inlet forms by the margins of the ala, the arcuate line of the ilium, the pectin pubic, and the pubic crest.

The fusion of the vertebrae and the large size of the sacrum forms an ideal base that allows it to support the weight of the entire body.

The development of the human skeleton initiates soon after conception. Around day 17 to 19, the notochordal process begins to form. The floor of this notochordal process fuses with the roof of the yolk sac to create the notochordal plate. The plate folds inward, thus forming the notochord. The notochord plays a vital role in maintaining the structure of the embryo and provides stimulation for the differentiation of surrounding tissue. It stimulates the overlying ectoderm to form neuroectoderm, giving rise to the neural plate, which will eventually form the neural tube. The neural tube provides the framework for the adult brain and spinal cord. The notochord itself will ultimately persist to form the nucleus pulposus in adults.

Beginning in the third week of gestation, somites start to develop around the notochord in a cranial to caudal direction. These somites give rise to sclerotomes. Two adjacent sclerotomes will fuse to form each vertebral body in a process called segmentation.

Endochondral ossification begins around the sixth week of gestation. Three primary ossification centers start to form in each vertebra. One center forms in the endochondral centrum and will lead to ossification of the vertebral body, while the other two centers form in the neural processes and will lead to the ossification of each pedicle. This process begins in the thoracolumbar region and proceeds bi-directionally (both cranially and caudally). The primary cartilage is replaced by bone during the eighth week of gestation. The neural processes and the centrum fuse around 3 to 6 years of age. Endochondral ossification does not complete until around the age of 26.[3]

The fusion of the sacrum begins around puberty and completes by the ages of 25 to 30.[4]

Spinal veins drain into venous plexuses that are located both inside and outside the vertebral canal.[6]

Lymph nodes are located in the concavity of the sacrum. They receive lymphatic flow from the rectum and posterior pelvic wall.

There are five pairs of sacral spinal nerves (S1-S5). The S1-S4 nerves originate from the cauda equina of the spinal cord, travel down the sacral canal, and exit via the four sacral foramina. S5 follows the same route other than it exits from the sacral hiatus rather than via foramina. The vertebrae themselves receive innervation by the meningeal branches of these spinal nerves.[7]

The most notable physiological variant of the sacrum is represented by its sexual dimorphism. In females, the sacrum tends to be shorter and broader than in their male counterparts. Females also have a less prominent sacral promontory, which allows for easier passage of offspring during childbirth.

There are many more anatomical differences, such as a variation in the number of sacral foramina, as well as morphological defects such as sacral agenesis, sacral spina bifida, and the presence of a sacral rib.

Knowledge of these anatomical variations is essential in being able to avoid complications that may arise in orthopedic spine surgery, anesthesia, obstetrics, and forensics. Examples of cases that merit special consideration include:

The venous plexuses that reside around the vertebral column allow for metastasis of cancer from the pelvis. The sacrum can also be the site for primary sarcomas. Sacral tumors can result in lumbosacral plexopathy.[10]

Sacral fractures may occur secondary to trauma (e.g., motor vehicle accidents) or fall in the elderly. This trauma may lead to S2-S5 sacral nerve root injury that results in sexual dysfunction and bowel or bladder incontinence, which may present as peripheral numbness and decreased rectal tone in an acute setting. 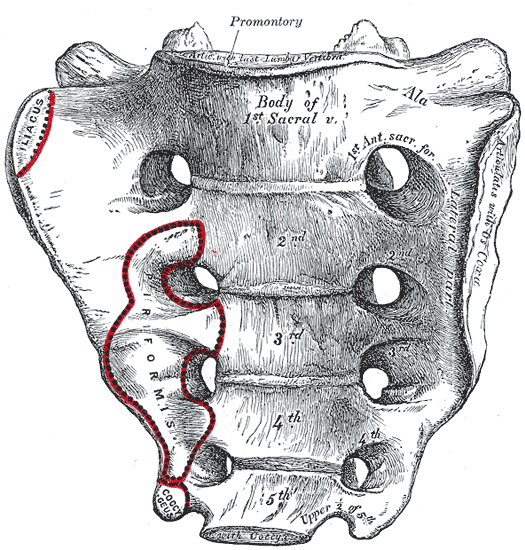 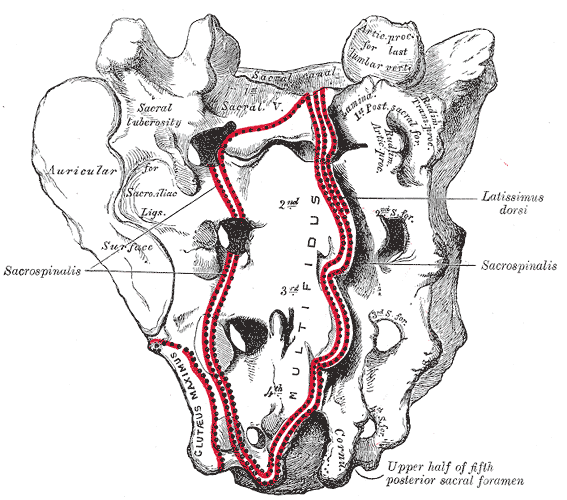 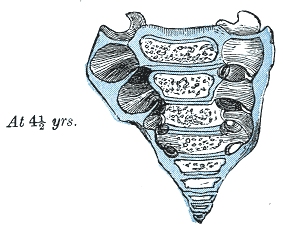 The Sacral Vertebrae, The Sacrum at four and a half years
Contributed by Gray's Anatomy Plates 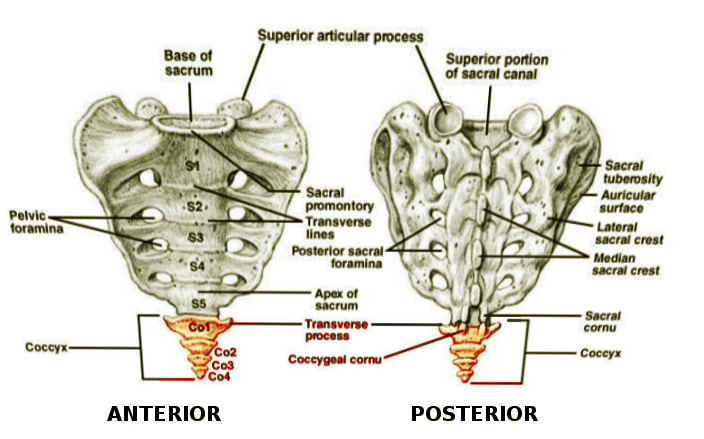