The heart becomes the first functional organ in the human embryo. By the end of the fourth week of development, the heart can beat spontaneously. Development of the atrioventricular (AV) septum begins in the third week. Failure of proper development of the atrioventricular septum can result in abnormalities that affect the normal physiology of the heart. These defects can range in severity.[1][2][3]

The developing heart undergoes many processes as it develops from a primitive tube to a functional organ. During embryonic development, there are various stages the heart undergoes to become functional. Around 18 days after fertilization, the primitive heart begins developing from 2 bilateral tubes that are found on the immature, disc-like embryo. Next, the embryo folds, allowing the 2 tubes to fuse in the midline forming a single heart tube. The primitive atria and ventricles are structurally found between the sinus venosus and the bulbus cordis. During the fourth week of development, the heart tube begins looping to form a shape that more closely resembles the adult heart.

Endocardial cushions that are involved in the development of the AV canal also play a role in the development of the interventricular septum and the closure of the ostium primum. Because of this, it gives off a cross-like appearance. This cross-like appearance is crucial to visualize on ultrasound to confirm the integrity of the heart during pregnancy.

Endocardial cushion development is crucial in the formation of atrial and ventricular septa, atrioventricular canals and valves, and aortic and pulmonary channels. Failure of fusion can result in several medical anomalies.

Atrioventricular septal defects (AVSDs) account for 4% to 5% of all congenital heart defects and approximately 0.5% of live births. AVSDs are found to have a strong association with Trisomy 21. Nonsyndromic AV canal defects appear to be associated with maternal diabetes and obesity.[7][8][9]

AVSDs occur when there is an inadequate fusion of the endocardial cushions with the middle atrial septum and the muscular portion of the ventricular septum. There are two common types of AVSDs, complete and partial. Approximately half of these AV canal defects are complete AV defects involving both atrial and ventricle septal defects with a common AV valve.

Atrial septal defects, which occur in approximately 6.5 out of 10,000 births, are congenital heart abnormalities due to an ostium secundum defect. This defect results in an unwanted opening between the left and right atrium. The proposed mechanisms which this may occur could be from the insufficient formation of the septum secundum or through excessive cell death and resorption of the septum primum. Another serious and rare abnormality which may develop includes cor triloculare, which includes triloculare biventriculare (common atrium) and triloculare biatrium. Triloculare biventricular is defined as a complete absence of the atrial septum and is the more common of the 2. Triloculare biatrium is the complete absence of a ventricular septum.

If there is a failure of the AV septum to fuse with the septum premium of the atria, the foramen premium remains open, resulting in a foramen premium defect. Generally, this occurs with a malformation of the mitral valve.

When the ventral and dorsal endocardial cushions fail to fuse, a large opening in the center of the heart develops. This defect is called a persistent common atrioventricular canal. This malformation results in the tricuspid and mitral valves to be unified as one common AV valve. Due to this error, there is left to right shunting in the atrium, resulting in an enlarged right atrium and ventricles.

When there is a defect in the atrioventricular septum, Ebstein's anomaly can develop. Ebstein anomaly may occur when posterior and septal leaflets of the tricuspid fail to attach as they are supposed to, displacing the leaflets into the right ventricle. This causes the right ventricle to “atrialize.” 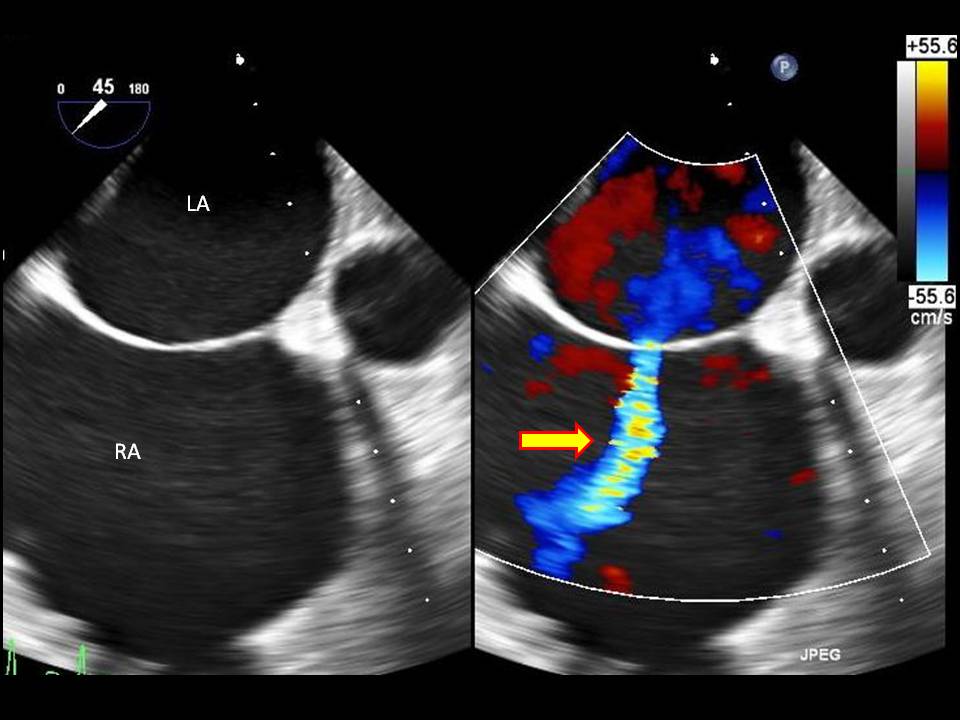