The scapulohumeral muscles are muscles that connect the scapula to the humerus.[1] The articulation between the glenoid area of the scapula and the head of the humerus is between the joints with greater ability to perform active and passive movements. Its ability to move makes this articulation very complex from the biomechanical point of view; the muscles that influence its movements must be in perfect neuromotor, metabolic, and structural synergy. Every single movement performed occurs in the three-dimensional space and each muscle, depending on the action performed, plays different roles. The shoulder musculature not only have the task of moving the joint, but it also has the responsibility of keeping it healthy because the correct muscular intervention avoids instability and conflicts of joint articulation.

Infraspinatus originates from the infraspinous fossa of the scapula,  located on the dorsal aspect of the scapula below the scapular spine.[4] It inserts on the middle facet of the greater tuberosity. Its primary function is the external rotation of the shoulder joint and the abduction of the scapula.[4]

Teres minor originates from the posterior part of the scapular, next to the lateral border.[5] It inserts at the greater tubercle of the humerus. The teres minor’s function is to externally rotate the upper arm at the shoulder joint. It is an antagonist to internal rotation.[5]

Deltoid originates from the spine of the scapula and lateral third of the clavicle. It inserts at the lateral humerus at the deltoid tuberosity. It has three parts, an anterior, lateral, and posterior. Together, the deltoid abducts the arm past fifteen degrees. The anterior and posterior portions stabilize the arm. The lateral part raises the arm from 15 to 100 degrees.[7]

Teres major originates from a lower one-third of the lateral scapula. It inserts medially to the intertubercular groove. Its function is to provide shoulder extension, adduction, and internal rotation.[8]

Coracobrachialis originates from the coracoid process and inserts at the medial aspect of the middle of the humerus.[1] Its function is flexion and adduction of the arm.

The biceps brachialis muscle originates with its long head from the supraglenoid tubercle of the scapula and with its short head from the coracoid process of the scapula. Its action at shoulder level is to flex and facilitate adduction on a horizontal plane. Both heads of which it is composed join at the level of the deltoid tuberosity of the humerus and, thanks to a common tendon, they are inserted at the level of the radial tuberosity and on the fascia of the forearm from the ulnar side.

The latissimus dorsi muscle forms the posterior pillar and the posterior wall of the axillary cavity. It covers the lower and lateral sides of the back (lumbar region) and the lateral part of the chest. It originates, through the posterior leaflet of the lumbodorsal fascia, from the spinous processes of the last six thoracic vertebrae and the lumbar vertebrae, from the supraspinous ligament, the medial sacral crest, and the posterior third of the external lip of the iliac crest. Some of its fibers also originate from the outer face of the last three or four ribs. The muscular bundles are carried up and out towards the axillary region reaching the insertion line on the medial lip of the bicipital groove of the humerus (crest of the small tuberosity). At the level of the shoulder, it is the most important internal rotator, as it is the most important for the adduction and flexion of the shoulder.

The pectoralis major muscle is located anteriorly in the thorax and forms much of the anterior wall of the axillary cavity. There is a clavicular head, a sternum-costal head, and an abdominal head. The bundles of the three parts converge outwards and insert with a flattened tendon at the lateral lip of the bicipital groove of the humerus (crest of the great tuberosity). Its contraction at shoulder level helps flexion, internal rotation, and adduction on a horizontal plane.

The trapezius muscle is located in the nuchal region and the dorsal part of the thorax. It originates from the medial third of the superior nuchal line, from the external occipital protuberance, the nuchal ligament, and the spinous processes of the seventh cervical vertebra and of all the thoracic vertebrae, as well as from the supraspinous ligament. Its bundles converge towards the shoulder and are inserted at the lateral third of the posterior margin of the clavicle, at the medial margin of the acromion, at the upper lip of the posterior margin of the spine of the scapula and at the medial end of the spine itself. Its action influences the movements of the scapula and indirectly helps the shoulder in adduction and flexion in the first degrees.

The three primary germ layers form during embryogenesis. They are the endoderm, ectoderm, and mesoderm. The mesoderm splits bilaterally into paired blocks known as somites that migrate towards developing limb buds during the fifth week of embryogenesis.[9] The somites create the striated muscles, including the scapulohumeral muscles.

The pectoralis major muscles and latissimus dorsi (superficial portions) form by a mechanism known as in-out mechanism or cellular migration. The mesenchymal cells or myogenic precursors migrate from the ventrolateral dermomyotome portion towards the area of what will be the upper limbs; a small part of these cells will go back to the axial trunk.

The trapezius muscle and the sternocleidomastoid muscle derive from the lateral plate of the occipital area mesoderm (non-somitic).

The supraspinatus has the least variation of this group of muscles while the subscapularis has the most variability. The supraspinatus muscle bulk may have separate muscle fibers that originate from the most anteromedial supraspinous fossa.[14] Part of supraspinatus tendon has been found to pass over the bicipital groove and extend into the subscapularis.[15] The insertion of infraspinatus has been seen to blend with the supraspinatus.[16] An inflexible fascial compartment has been observed enclosing the teres minor.[17] Additionally, a continuous fascial layer has been seen surrounding both the infraspinatus and teres minor.[17] Some examples of physiological variants include the subscapularis muscle which has been seen to have small accessory muscles with tendons that insert with the primary tendon.[18] On MRI, a study identified three types of insertion. A majority inserted into the bicipital groove. 20% of the subscapularis inserted on the classical insertion of the lesser tubercle and the last type inserted across the greater tuberosity.[19] Teres major has been found to fuse with the tendon of latissimus dorsi.[20] If the teres major tendons are completely fused, it can result in the terminal tendon becoming absent. Also, tissue slips passing from latissimus dorsi to teres major can occur.[21] There are multiple variations of the deltoid. One variation is the posterior fibers of the deltoid can be separated from the rest of the deltoid by a fascial sheath.[22] One variation of coracobrachialis is an accessory slip traveled medially in front of the median nerve and inserted on the anteromedial aspect of the medial epicondyle.[23] There is also a report of a three-headed coracobrachialis.[24]

The biceps brachialis and the brachial triceps may have supernumerary muscular bellies.

The latissimus dorsi muscle may have direct contact with the deltoid muscle, through the presence of the axillary arch muscle.

The pectoralis major muscle could have an additional extension in the abdomen due to the presence of a rare muscle, which is known as chondrocoracoideus muscle or muscle of Wood. The latter also blends with the muscle fibers of the deltoid at the clavicular level.

The trapezius muscle may have a relationship with a rare muscle, which is known as cleidocervicalis muscle, involving the cervical tract (C5) and the clavicle.

If any of the scapulohumeral muscles are injured, it can affect the motion of the shoulder and scapula. If a tear is present in any of these muscles, the function of the shoulder can still be maintained non-surgically depending on which muscle is damaged. Surgery is indicated if conservative management fails.

Scapulohumeral rhythm (SHR) can be affected by damage to any of the scapulohumeral muscles. Rotator cuff tears are especially susceptive to changes to the SHR because there will be an increased motion at the scapulothoracic joint to compensate for a decrease in glenohumeral motion.[2]

Generally, after a total shoulder arthroplasty operation, the biomechanics of the shoulder and therefore the muscular neurological intervention (also considering the presence of scars and adhesions) change. One study reveals that a shoulder having undergone surgery tends to use the scapulothoracic system in a higher percentage and less the glenohumeral system when the patient has to raise his arm. The contrary event from the biomechanical point of view occurs with a patient who has undergone a full-thickness rotator cuff tears.

In the sports field, it seems that the surgical procedure (arthroscopic) negatively influences the arthrocinematics, preventing the return to sports performance equal to those preceding the operation.

Scapular dyskinesia is a loss of normal scapular motion. It can result from inflexibility and stiffness of muscles attaching from the scapular to the humerus.[25] Clinically, there can be abnormal movement of the scapula on the thorax, unusually prominent scapular landmarks, or premature scapular elevation.[25] Scapular dyskinesis can result in decreased efficiency of shoulder motion and decrease the strength of the rotator cuff muscles.[25] If dyskinesis occurs, it may be due to a response to injury. Dyskinesis can also make an individual more susceptible to injury.[25]

Subscapularis tendon ruptures frequently occur in approximately 60% of people in the setting of anterior shoulder dislocations.[26][27]

The functional shoulder instability (FSI) occurs when there is a dyssynergia of the muscles acting on the shoulder, without trauma or morphological, anatomical alterations. We can distinguish subgroups: positional FSI (if a sub-dislocation occurs during movement) and nonpositional FSI (if a sub-dislocation occurs in a neutral position). The FSI can be controlled or not controlled by the will of the patient. The FSI seems to have origins from adolescence and the causes are not completely understood, with an incidence of 69% among young people.

When evaluating a shoulder with the multiple existing manual tests, it is always better to combine instrumental clinical examinations, since the literature demonstrates a modest accuracy in the search for lesions.

The physiotherapeutic approach is useful as a conservative therapy and to provide patient education on the correct position of the shoulder, or it can assist in the period in which the patient has to recover the post-surgery shoulder function. It is not always feasible to recover the range of motion, and this will depend on multiple factors, such as the pathology, the type of intervention, the ability to withstand pain, etc.

Regarding the osteopathic approach to the recovery of shoulder function or post-surgical pain relief, literature does not have a unanimous consensus.

The chiropractic approach in the recovery of shoulder function, both as a conservative practice and as a post-surgery recovery method, the literature is not unanimous and long-term data are lacking.

The use of post-surgery taping on the shoulder could reduce the sensation of pain but not joint swelling, while the use of this instrument in unstable shoulders does not find consensus in the literature.

Probably the best approach to patient recovery is with an interprofessional team approach. 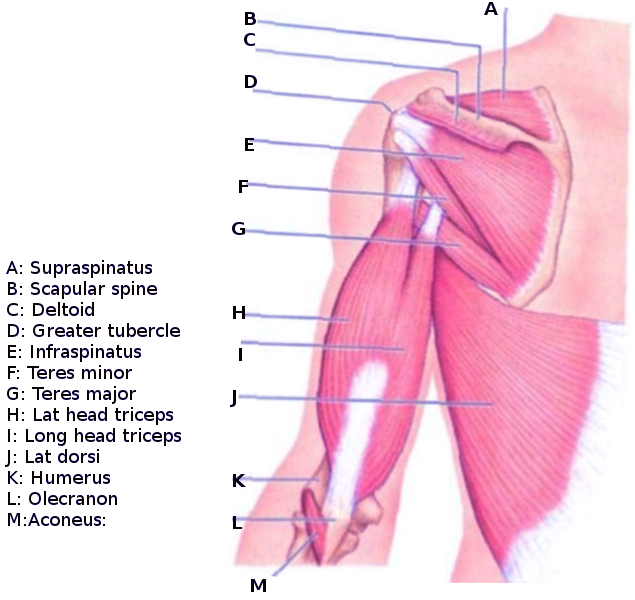 Breisch EA, A rare human variation: the relationship of the axillary and inferior subscapular nerves to an accessory subscapularis muscle. The Anatomical record. 1986 Nov;     [PubMed PMID: 3789427]