One of the most intricate structures on the human body is the hands. The hands are made up of thirty-four muscles, twenty-nine bones, three major nerves, and two major arteries. The complexity of the hands shows that many structures are required to work in sync to produce various motor movements in the hand. But like anything else in the body, the blood supply is one of the essential requirements to function. The two major arteries in the body are the radial and ulnar arteries. These arteries are the terminal division of the brachial artery. These arteries bring oxygenated blood to the forearm and the hand to maintain proper metabolic activity in the hands.

Even though the hand has two major arteries bringing it oxygenated blood, the hand itself has multiple networks of vessels to ensure proper blood flow and collateral blood supply. The network of blood supply to the hand is complex and critical since there are so many muscles and bones that are performing many metabolic cycles to ultimately work in sync to create movements needed for fine motor skills or activities of daily living.

The arteries in the hand are made up of three layers: tunica media, tunica intima, and adventitia. The tunica intima is the innermost layer in the arteries. This layer is made up of endothelium cells intermixed with elastic tissue. The function of the tunica intima is to help support proper blood flow since the endothelial cells are made to come in contact with blood without adhering. While the tunica media is the layer in the middle, this layer is mainly composed of smooth muscles. The smooth muscles in this layer create the pulsatile motion of the arteries by contracting to propel blood forward away from the heart to bring oxygenated blood to distal parts of the body. The smooth muscle in this layer also contributes to the integrity of the arteries to dilate and elasticity to snap back to the original shape and size, in contrast with veins that contain less smooth muscle because veins function to drain blood and pool blood until external forces support the propulsion of blood back to the heart. The outermost layer of the arteries is the adventitia. This layer acts as a protective covering on the outside of the arteries.

The network formed from divisions of the radial and ulnar arteries provides collateral blood flow to each other blood supplied regions. The radial artery travels toward the hand on the lateral side of the arm then upon reaching the hand it forms the deep palmar arch. This arch is responsible for bringing blood to the thumb and radial side of the index finger by branching into the princeps pollicis artery to supply the thumb, and the princeps pollicis artery will branch into digital branches for the thumb distally. As for the index finger, the deep palmar arch gives off the radial artery of the index finger. This deep palmar arch continues around and sometimes anastomoses with the terminal part of the ulnar artery. The ulnar artery descends toward the hand on the medial side of the arm. When it reaches the hand, the ulnar artery contributes by forming the superficial palmar arch. The superficial palmar arch is the major blood supply to the hand because it brings blood to more digitals and gives a significant amount of blood as collateral to the deep palmar branch if needed. This arch forms around the metacarpal bones and branches into the common palmar digital arteries to ascend the fingers. Once the common palmar digital arteries reach the proximal phalanges, it branches into the proper palmar digital arteries to supply the fingers with blood, which occurs starting at the fifth finger to the ulnar side of the index finger.[1]

During fetal development, arteries arise from mesenchyme tissue. The mesoderm of the fourth aortic arch will form the subclavian artery that is the beginning of the path towards the distal upper extremity arteries. The subclavian artery continues toward the arm and eventually becomes the axillary artery. Once the subclavian artery passes under the clavicle and the first rib then when the artery emerges, it becomes the axillary artery. The axillary artery will continue down the arm until it passes the lower border of the teres minor muscle attachment to the humerus. The brachial artery will continue down the arm until it divides at the cubital fossa. Then the brachial artery divides into the ulnar and radial arteries. The progression of the growth and division of the arteries follows the growth of the upper limb. The proper growth of the limb is influenced by the Homeobox (HOX) genes, which influences appendage development in the correct location while the fibroblast growth factor (FGF) gene influences the division of the mesoderm via mitosis to elongate the upper limb as well as the growth of vessels due to the angiogenesis properties from the FGF gene.[2]

The radial and ulnar arteries themselves receive blood supply from each other through the formation of collateral blood flow from the palmar arches. The walls of the arteries receive blood supply from a small network of capillaries embedded in the wall of the artery called the vasa vasorum. The vasa vasorum provides the nutrients and oxygenated blood to the artery so the radial and ulnar arteries can function metabolically. As for the lymphatic drainage of the hand, the lymph nodes follow the path of the radial and ulnar arteries and the branches from these arteries. The lymph drains toward the cubital fossa then to the axilla and eventually drains into the junction of the subclavian vein and the internal jugular vein via the right lymphatic duct on the right side and the thoracic duct on the left side.[3]

Three major nerves descend toward the hand originating from the brachial plexus superiorly. The path of the radial, ulnar, and median nerve follows closely with their corresponding artery. The radial nerve made up from spinal roots C5-T1 will be responsible for innervating the dorsal and extensor side of the lateral part of the hand including the thumb, index finger, middle finger, and lateral half of the ring finger. The median nerve made up from spinal roots C5-T1 will innervate the anterior side of the hand with respect to the same fingers as the radial nerve and lateral palm. The ulnar nerve made up from spinal roots C8-T1 is responsible for the medial half of the palm, ring finger, and the little finger anteriorly and dorsally.[4]

The primary function of the radial nerve is to provide sensory and extension motor movements to its corresponding region of innervation while the other half of the dorsal of the hand will be performing the same motion but innervated by the ulnar nerve. The radial nerve is solely responsible for the supination of the hand. As for hand and finger flexion, these motions are innervated by the median and ulnar on the anterior side. But the motion of abduction and adduction of the fingers are produced from the ulnar nerve. The median nerve is solely responsible for hand pronation.

There are many muscles in the hand. The muscles in the deepest layer are between the metacarpal bones are responsible for either abduction or adduction of the fingers. The motion of abduction is created from the four dorsal interosseous muscles while adduction results from three palmar interosseous muscles. The ulnar nerve is responsible for the innervation of these interosseous muscles. Furthermore, the motion of the thumb and the little finger can separate into the actions of the thenar and hypothenar muscles. The thenar muscles are responsible for three key movements of the thumb: oppose (bring the thumb and touch the little finger), abduction, and flexion of the thumb. The opponens pollicis muscle produces the opposing movement, and the abductor pollicis brevis will abduct the thumb; both of these muscles receive innervation from the median nerve. Thumb flexion results from the action of the flexor pollicis brevis. The median nerve will innervate the majority of the flexor pollicis brevis, but the ulnar nerve will innervate the deep head of the flexor pollicis brevis.

As for the hypothenar muscles, the ulnar nerve will be responsible for the movements in this compartment. The motions are abduction, opposition, and flexion of the little finger. The muscle that performs abduction is the abductor digiti minimi, flexion is by the flexor digiti minimi, and oppose is by opponens digiti minimi.

The cause of the hand and wrist flexion or extension as a whole is a function of the attachment of the muscle tendons from the forearm and not the actual hand muscles themselves.

The surgical considerations for the arteries of the hand are to ensure that the structures will have proper blood flow before and after surgical intervention. The anatomy of the arteries in the hand itself is usually sufficient to maintain blood flow from the collateral anastomoses from the radial and ulnar arteries, but sometimes with variations in development, there may be an absence in collateral blood flow formation.

In patients with myocardial infarction, the placement of a stent in the coronary artery is an option if open-heart surgery is not indicated or if the patient prefers stent placement. In some patients that receive coronary artery stent, the cannulation site may be the radial artery. If a patient is a candidate for stent placement with the use of the radial artery, the length of the hospital stay decreases compared to other methods.

The radial artery is an excellent place to palpate during the physical examination to count pulse rate and compare both sides bilaterally to see if there are any discrepancies between the blood flow to either arm or hand. The pulse from the radial artery can also be used to examine any differences with the blood flow to the lower extremities such as in the coarctation of the aorta or Buerger disease, a vasculitis affecting the middle size vessels. The radial pulse can be useful in the diagnosis of thoracic outlet syndrome with Adson's test. Adson's test is done by abducting the arm while palpating the radial pulse then extending and rotating the head to the ipsilateral side as the radial pulse to determine if the blood supply is affected. A positive test is when there is a decrease in pulse strength or the complete absence of the pulse, which would indicate thoracic outlet syndrome.[8] 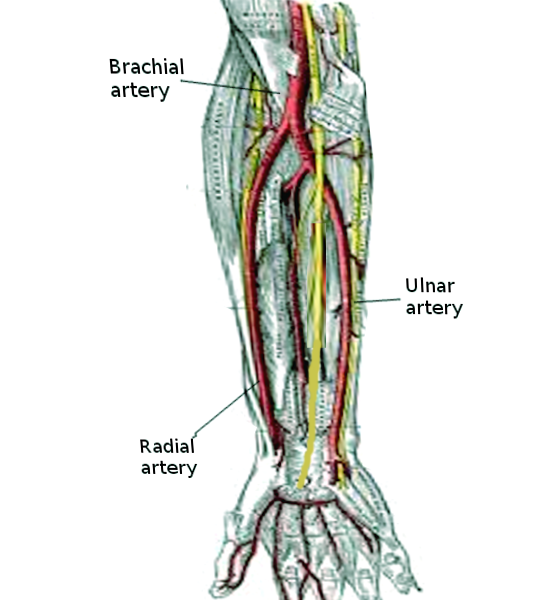 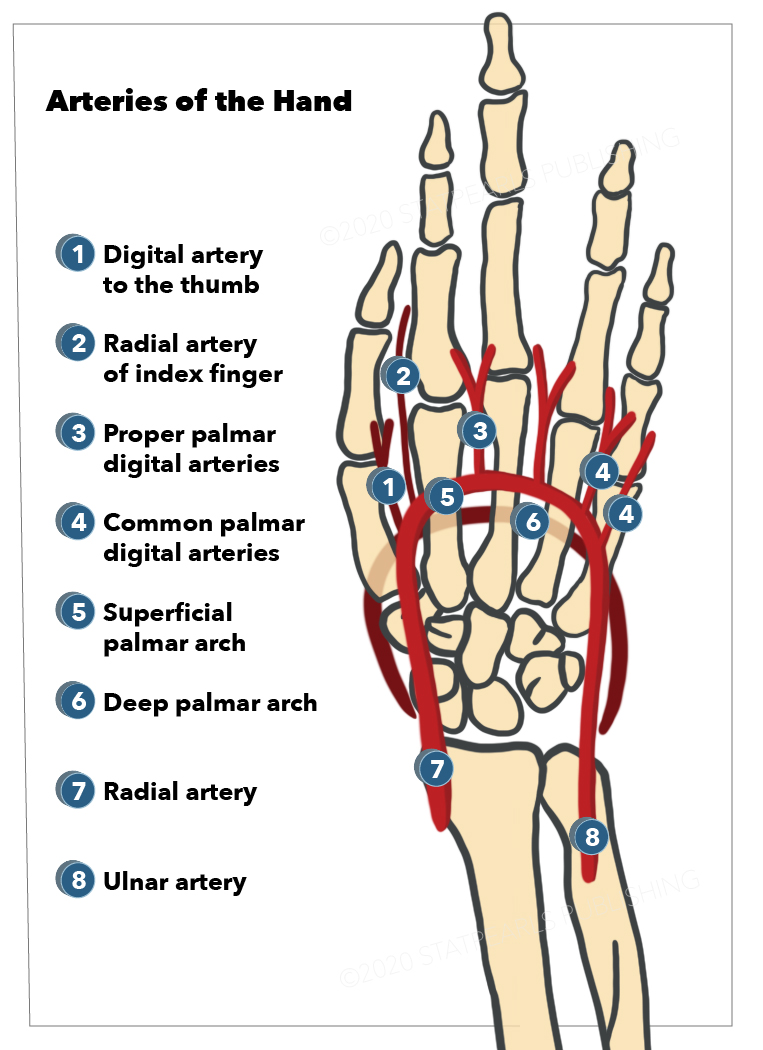