The three major nerves of the thigh originate from the lumbar and sacral plexuses, providing both motor and sensory branches to structures throughout the pelvis and the lower limbs. While slight anatomical variations can exist, the location and function of each of the three nerves have been consistently anatomically preserved. Therefore, when signs and symptoms arise in patients, the clinicians can quickly localize lesions that affect these nerves.[1][2]

The function of the three major nerves and their branches in the thigh is to provide both somatosensory information to the cortex and to innervate the muscles of the thigh. The thigh can be broken down into three different compartments: anterior, posterior, and medial. The anterior compartment has the main action of allowing extension of the thigh at the knee joint via the femoral nerve. The posterior compartment contains muscles that allow the flexion of the leg at the knee joint and to also allow extension of the thigh at the hip joint via the sciatic nerve. The medial compartment of the leg is innervated by the obturator nerve and serves to allow adduction at the hip joint.

How these nerves make their way to the target cells of the muscles of the thigh is yet to be determined. Some theories about how these nerves advance from the spinal cord to their target muscles have been put forth, but none have been confirmed. It has been described that nerve trunks advance with a filopodium of the pioneer growth cone in order to allow guidance of the nerves to their assigned tissues. Other studies have also shown that manipulating the position of the target muscle does not interfere with the nerve’s ability to progress toward it for innervation. It has been discussed that ventral axonal attraction may be mediated by binding of netrins, a chemoattractant, to an axonal receptor but this is still being investigated.

The posterior compartment of the thigh is innervated by divisions of the large sciatic nerve. The sciatic nerve comes from the sacral plexus and introduces itself through the greater sciatic foramen. As it passes through the greater sciatic foramen, it emerges with the piriformis muscle being anterior to its exit point and then descends inferiorly. The nerve moves through the gluteal area and begins to enter the posterior compartment of the thigh by traveling posterior to the long head of the biceps femoris. Recent literature has described the sciatic nerve as two individual nerves, the tibial nerve and the common fibular nerve, that have been bundled together in a common connective tissue sheath. While authors agree that the sciatic nerve separates into the two individual nerves at the apex of the popliteal fossa, it has been discussed that approximately 12% of people have separation of the sciatic nerve as it leaves the pelvis.[4][5]

Nerve blocks are commonly used in this region to promote pain management for chronic pain or limb surgery. This is especially useful in situations where patients cannot tolerate a general anesthetic. Nerve blocks are frequently carried out under ultrasound guidance, but anatomical landmarks have been proven useful in confirming correct anesthetic placement. One such block is the obturator nerve block, where the anesthetic is injected inferiorly to the pubic tubercle and lateral to the adductor longus muscle. Another is the femoral nerve block. While performing a femoral nerve block, it is imperative that clinicians are aware of surrounding structures during their procedure. From lateral to medial, the structures are the femoral nerve, then artery, and subsequently the vein. This is commonly remembered by the pneumonic NAVY, with the Y signifying the midline of the patient. This knowledge is also essential if arterial or venous sampling is required from a femoral vessel.

The literature has shown that the sciatic nerve has been at risk during a total hip arthroplasty. The total injury risk is between 0.5% and 2.0%, with an increased risk during revision procedures of 1.7% to 7.6%.

The nerves of the thigh can be inadvertently injured through other mechanisms as well. An example of this is the intramuscular injection in the gluteal region. The gluteal region is divided into four quadrants by two imaginary lines to minimize the risk of sciatic nerve injury during this procedure. One travels inferiorly from the highest point of the iliac crest while the other travels transversely halfway between the previous iliac crest point and the ischial tuberosity. The sciatic nerve travels through the lower medial quadrant, so intramuscular injections are recommended to be placed in the upper lateral quadrant of the gluteal region.

Sciatica is a medical condition that results from compression of the sciatic nerve. Common signs of sciatica include weakness in the knee, difficulty in rotating the ankle, and decreased reflex speed. Symptoms include numbness, paraesthesia, and pain or weakness in the areas innervated by the sciatic nerve. Causes of sciatica include any mechanism that could potentially cause compression of the sciatic nerve such as pregnancy, slipped disks, lumbar spine stenosis, or acute injury. Piriformis syndrome, most commonly seen in people who are seated for long periods at a time, results from the piriformis muscle compressing the sciatic nerve as it travels toward the posterior compartment of the thigh. 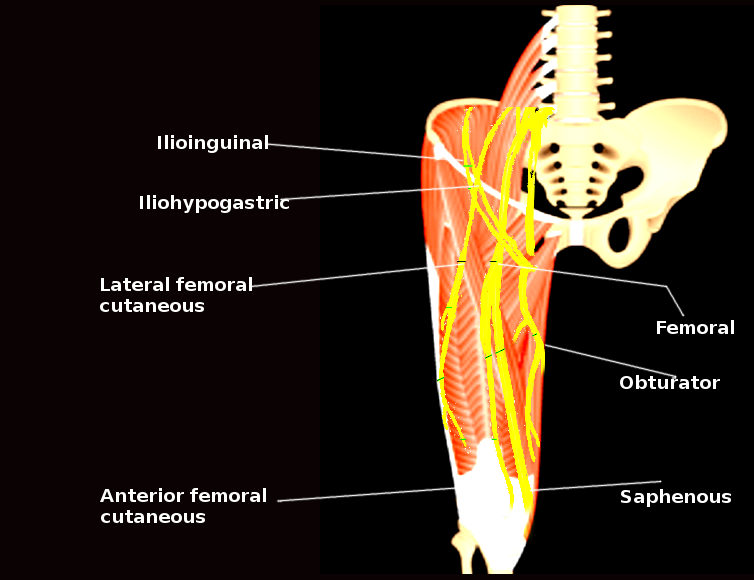