The primary function of the FLM and FBM is eversion of the foot and ankle, while their secondary function is ankle plantarflexion. The fibularis muscles act as antagonists to foot and ankle inversion, which is why they may be injured in inversion ankle sprains.[3] Additionally, the fibularis longus tendon’s (FLT’s) course along the plantar aspect of the foot, crossing the transverse and lateral arches of the foot, and inserting on the base of the first metatarsal, cause it to be important in maintaining the transverse and lateral arches, and in lowering the first metatarsal during foot pronation.[4]

The function of the superficial fibular nerve, anterior tibial artery, and fibular artery include providing a neurovascular supply to the lateral leg compartment.

The formation of a human limb is a complex process embryologically, with numerous molecular signaling pathways and factors being involved. Limbs arise from limb buds, which are small buds of undifferentiated lateral plate mesoderm cells surrounded by ectoderm cells. The lateral plate mesoderm cells give rise to the connective tissues of the limb, such as bone, cartilage, muscle, and tendon. Cells that migrate from the somites to the lateral plate mesoderm also gives rise to muscle cells. The limb buds are located bilaterally, on two distinct levels of the anterior-posterior (AP) axis. The limb buds located by the cervical-thoracic transition give rise to the upper limbs (forelimbs), while the limb buds located by the lumbar-sacral transition give rise to the lower limbs (hindlimbs). Specific genes, Pitx1 and Hox, have been found to determine the identity of limbs; whether they will be forelimbs or hindlimbs. Pitx1 has been found in the lateral plate mesoderm, and regulates Tbx4 expression, helping to form a hindlimb identity. Hox4 and Hox5 regulate Tbx5 expression and help to form a forelimb identity. Hox genes also contribute to the development of the interlimb region, including the vertebral column.[17]

Signaling regions in the limb buds control the growth of the lateral plate mesoderm in three different positional planes: dorso-ventral (from the back of the hand to the palms), AP (from the thumb to the 5th digit), and the proximo-distal (from the shoulder to the fingertips).[17]

The blood supply of the lateral leg compartment is described below going proximally to distally[1]:

The superficial fibular nerve runs within the FLM, providing a motor function to the FLM and FBM. Approximately 12cm above the ankle joint, the superficial fibular nerve pierces through the deep (crural) fascia of the leg and splits into the medial dorsal cutaneous nerve (MDN) and intermediate dorsal cutaneous nerve (IDN).[5] The MDN and IDN provide sensory input for the lateral leg and dorsum of the foot, except between the first web-space.[2][9][5][9]

The deep peroneal nerve supplies the muscles of the anterior leg compartment.[2]

The FBT inserts onto the lateral aspect of the tuberosity at the base of the 5th metatarsal.[7]

The FLT  travels inferolateral along the calcaneus, and when it reaches the cuboid bone, the FLT tendon may have an os peroneum (a fibrocartilaginous nodule) that articulates with the cuboid, forming the peroneocuboid joint. The presence of this joint is variable. Distal to the cuboid, the FLT makes a sharp turn, passing between the calcaneal tuberosity and the base of the 5th metatarsal, traversing the cuboid tunnel anteromedially, and entering the plantar aspect of the foot. From there, the FLT inserts onto the base of the first metatarsal, with its synovial tendon sheath ending right before it inserts. Variable insertions of the FLT include the medial cuneiform, the plantar aspect of the base of the 2nd- 5th metatarsals, and the first dorsal interosseous muscle.[18]

While the origin of the FBM is consistent, variations in its insertion exist:[7]

Originating as a small slip from the FBT, the FDQ is a small muscle with a wide range of reported prevalence, from 15.5% to 59.7%. The FDQ is innervated by the superficial fibular nerve. The FDQ has three different insertions, which are used to classify the muscle variant:[7]

The FQ is a common accessory muscle in the ankle, with a prevalence of 4.3 to 21.7%. Possible origins of the FQ are the distal FBM (most common) and the distal fibula. The possible insertions of the FQ are the retrofibular trochlea of the calcaneus (most common), the base of the 5th metatarsal, and the cuboid bone. The FQ assists with supporting the lateral edge of the foot during eversion, as well as lateral foot and ankle stabilization. The presence of an FQ can increase a patient’s risk of FBT degeneration through stenosis of the lateral leg compartment, which may cause lateral ankle instability. On the contrary, the FQ can be used to reconstruct a ruptured superior fibular retinaculum. Therefore, it is important for clinicians to be aware of the presence of the FQ, as it may be a cause of chronic lateral ankle instability, as well as be used in surgical reconstruction.[6] In patients with a symptomatic FQ, orthotics can be utilized, and if those are ineffective, surgical ablation of the FQ can be performed.[19]

It has been reported that the common fibular nerve may split into the superficial and deep fibular nerve within the popliteal fossa, not by the head of the fibula in the fibular tunnel. While their anatomical splitting is altered, the two branches maintain innervation to their usual structures.[2]

The superficial fibular nerve may have variations in where it pierces through the dorsal (crural) fascia and variations in its splitting into the MDN and IDN. There are three variations which have been reported in the literature:[9]

Many different incision locations and techniques are used. It is imperative that incisions are placed in locations that provide access to the fascial compartment that is being treated, and that incisions minimize iatrogenic neurovascular injury. It has been shown that while performing a fasciotomy of the anterior and lateral compartments, ultrasound can be utilized to locate the intermuscular septum separating the anterior and lateral compartments, providing a good location for surgeons to place their incision directly over the septum, in order to prevent damage to neurovascular structures in the area. Limitations of US include that it is not effective in patients with increased BMIs, especially patients who are obese, and the accuracy of US is heavily operator-dependent. Therefore, when properly trained individuals are utilizing US to locate the intermuscular septum between the anterior and lateral leg compartments, it can be an effective guide on the surgical incision placement.[21]

With a complication rate of 13%, it is important to be aware of the complications of surgical intervention for compartment syndrome. They include:[12][10][12]

Patients, especially athletes, should be warned that recurrence of compartment syndrome is possible. Recurrence rates between 0% and 44.7% have been reported. Recurrence may also result from an incomplete fascial release, excessive scarring, or inadequate rehabilitation. A second-time fasciotomy should be open and more extensive than the first one.[10]

When surgical interventions are being performed for conditions around the fibular head and popliteal region, it is important to be aware of the anatomically variable splitting of the common fibular nerve, in order to avoid iatrogenic injury.[2]

The 5 P’s mnemonic can be used to remember the symptoms of compartment syndrome:

When ischemia occurs for a prolonged time, necrosis can occur, resulting in the replacement of muscle with fibrous scar tissue (Volkmann’s Ischemic Contracture). Rhabdomyolysis may also occur, which can cause acute renal injury and cardiac arrhythmias.[15] Therefore, swift diagnosis and treatment of compartment syndrome are essential to prevent irreversible damage. The diagnosis of compartment syndrome is a clinical diagnosis, utilizing an adequate history, physical examination, intracompartmental pressure (ICP), ultrasound (US), and magnetic resonance imaging (MRI). Surgical intervention for patients who need it should not be delayed by the lack of ICP or MRI availability, as “time is muscle.”[25] 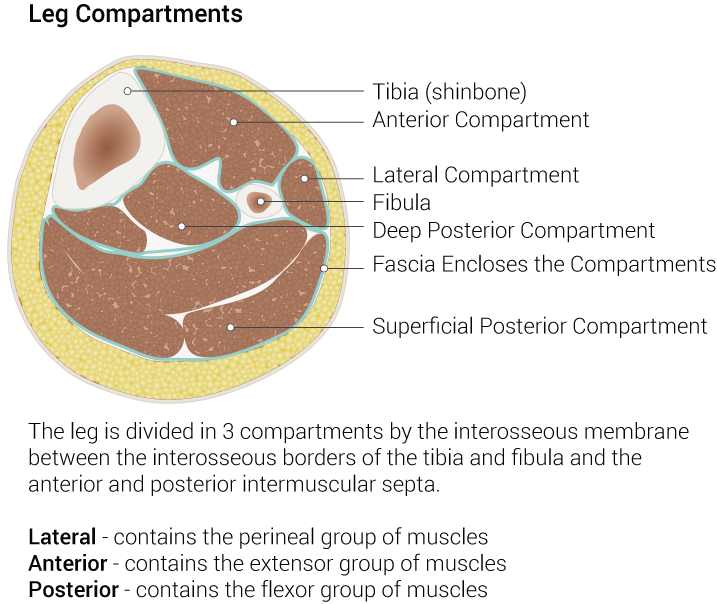