The foot is a complex mechanical structure of the human body composed of 33 joints, 26 bones, and more than a hundred muscles, tendons, and ligaments that all work together to bear weight, allow for locomotion, and transmit force. The joints of the foot are made wherever two or more of the foot bones meet.

The anatomy of the foot is divisible into the hindfoot, mid-foot, and forefoot. The hindfoot is composed of two bones, the talus, and the calcaneus.  The talus has an anterior, middle, and posterior facet that articulates with the calcaneus inferiorly to form the subtalar or talocalcaneal joint. The talus articulates with the navicular distally, and the calcaneus articulates with the cuboid. The two bones of the hindfoot function together and are responsible for inversion and eversion. Some dorsiflexion and plantar flexion occur through these articulations as well. The talonavicular joint is a highly congruent ball and socket joint formed by the convex anterior margin of the talar head and the concave posterior contour of the navicular. The calcaneocuboid joint is a condyloid joint formed by the vertically oriented concave anterior facet of the calcaneus and the transversely oriented posterior convexity of the cuboid. The talonavicular and calcaneocuboid joints are also known as Choparts joints. Because of the shape and orientation of the talonavicular joint, it is responsible for the majority of the motion of the hindfoot. Together, the talocalcaneonavicular joint, known as the acetabulum pedis, and the calcaneocuboid joint allow for motion in both the longitudinal and transverse planes.

The midfoot is composed of five irregular shaped bones including the navicular, medial cuneiform, middle cuneiform, lateral cuneiform, and the cuboid. The midfoot connects to the hindfoot via the mid-tarsal joint (Choparts joint).

The forefoot consists of five metatarsals and respective phalanges. Phalanges are further divided into three separate phalanges (a proximal, middle, and distal phalanx) for each of the toes with the exception for the big toe, which only contains a proximal and distal phalanx. The phalanges are composed of metatarsophalangeal and interphalangeal joints. Each toe possesses a proximal and distal interphalangeal joint while the big toe only has one interphalangeal joint. The forefoot connects to the midfoot through the tarsometatarsal joint, also known as the Lisfranc joint. The Lisfranc joint is a complex articulation involving the anterior margins of the cuboid and three cuneiform bones with their respective metatarsals, none more important than the articulation between the middle cuneiform and second metatarsal base. The Lisfranc joints are gliding joints and make up the transverse arch of the foot, and its contiguity is paramount for the stability of the foot during ambulation. [1][2]

The joints of the foot have two essential roles including weight-bearing and propulsion during walking, running and jumping. The foot requires a high degree of flexibility and stability to be able to perform these functions. The vast number of joints in the foot is what provides this flexibility while stability results through the articulation of the joints and the ability of the foot to act both as a rigid lever and a flexible lever during the normal gait cycle. The midtarsal joint plays a role during ambulation, and its function is dependent on the position of the subtalar joint. During eversion of the subtalar joint, the talonavicular and calcaneocuboid joints are parallel to each other and permit motion between them. This motion is important during the early stance/heel strike stage of ambulation. Conversely, with inversion of the subtalar joint, the joints are not parallel, and no motion is permitted allowing the foot to act as a rigid lever for the late stand/toe-off phase of ambulation. Metatarsal phalangeal joints are condyloid joints that allow for flexion and extension as well as abduction and adduction. Interphalangeal joints are hinge joints allowing for flexion and extension.[3][4]

The blood supply to the foot comes mainly from the dorsalis pedis and the posterior tibial arteries.

The blood supply to the joints of the foot is a result of these arteries sharing anastomosis around the joints. The articular capsule is avascular and receives nutrients from the surrounding blood supply via diffusion.

The popliteal lymph nods receive lymphatic drainage from the foot, that subsequently enters the deep and superficial inguinal lymph nodes. [5]

The plantar aspect of the tarsal joints is supplied by the lateral and medial plantar nerves whereas the deep peroneal nerve supplies the dorsal aspect of the joint.  The intermediate dorsal cutaneous nerve gives branches to supply the joint between the lateral and intermediate cuneiform bones whereas the subtalar and calcaneocuboid joints receive innervation from the accessory deep peroneal nerve and the lateral dorsal cutaneous nerve.

The metatarsophalangeal joints primarily receive its main supply from the plantar digital nerve, The innervation of the interphalangeal joints is from the medial dorsal cutaneous branch of the superficial fibular nerve and plantar interdigital nerves Occasionally, branches of the deep fibular, sural, and the intermediate dorsal cutaneous nerve can also innervate these joints.

The muscles of the foot can be divided into two separate groups known as the extrinsic and intrinsic muscles.

The extrinsic muscles arise from the lateral, anterior, and posterior compartments of the leg and insert onto the foot. The anterior compartment of the leg contains the extensor digitorum longus, fibularis tertius muscles, tibialis anterior, and extensor hallucis longus muscles which are responsible for foot inversion, ankle dorsiflexion, and toe extension. The muscles in the lateral compartment are the fibularis brevis and fibularis longus muscles, whose primary role is in foot eversion. Finally, the muscles in the posterior compartment include the gastrocnemius, flexor hallucis longus, flexor digitorum longus, popliteus, plantaris, soleus, and tibialis posterior muscles. These muscles manage plantar flexion, foot inversion, and toe flexion. [5]

Lisfranc injuries are categorizable into sprains and fracture/dislocation. The most common mechanism of injury is axial compression on a hyperplantar flexed foot. Patients present with a painful swollen foot with an inability to bear weight. Patients also typically have a plantar ecchymosis at the mid-foot which is highly correlative to a Lisfranc injury. During the physical exam, there is palpable tenderness at the midfoot, and passive motion of the forefoot reproduces the pain. Initial imaging is done with non-weight-bearing anteroposterior (AP), lateral and oblique x-rays. This can miss up to 50% of injuries so if there is a high index of suspicion then a weight-bearing comparison film with the contralateral foot is helpful.

Disruption of a line drawn from the medial base of the second metatarsal to the middle cuneiform as well as dorsal displacement of the first and or second metatarsal bases are reliable signs of fracture-dislocation. 2-mm or more of separation between the first and second metatarsal is a sign of instability. The fleck sign is another important finding of a Lisfranc injury and indicates an avulsion fracture of the Lisfranc ligament from the second metatarsal base. Missed diagnosis is common for Lisfranc injuries and can lead to chronic pain, dysfunction, and deformity. Non-displaced injuries are treated with a non-weight-bearing cast or boot for 6-8 weeks. If the injury is displaced over 2-mm, then surgical fixation is required.  For markedly displaced injuries open reduction and internal fixation is the treatment of choice.[6]

Calcaneus fractures result secondary to a fall from height. The range of injuries can be mildly displaced to severely comminuted fractures. Often missed injuries also include lumbar spine compression fractures. These injuries can be devastating in their long-term sequelae not only from the damage to the subtalar joint but to the surrounding soft tissue as well.

Jones fractures are fractures of the base of the fifth metatarsal which is separate and distinct from avulsion fractures. This fracture represents a vascular watershed area prone to nonunion and requires prompt surgical stabilization.

Charcot neuropathic osteoarthropathy is a chronic progressive disease most commonly seen in diabetes. This is frequently seen in the foot and ankle as a result of peripheral neuropathy. It starts off as a localized unregulated inflammatory process but eventually leads to gradual bone loss, joint dislocations, and deformities. Patients usually present with a red, warm, and swollen foot. Pain may or may not be present. Radiographs of the affected area can show a range of pathologies from osteopenia, fracture and dislocations, and severe joint destruction. Work up should include a CBC, CRP, and ESR to rule out an infectious process. MRI is also helpful and may help distinguish between infection and arthropathy.[7]

Gout typically presents as an acute and extremely painful red, swollen, great toe specifically affecting the metatarsophalangeal joint (MTP). The pathogenesis remains unclear but is thought to be due to a purine metabolism defect causing monosodium urate crystals to deposit in joints. Patients usually have elevated uric acid in the blood but the diagnosis is made by aspiration of the joint to find negatively birefringent crystals. Treatment for acute episodes is rest with nonsteroidal anti-inflammatory medications, glucocorticoids, or colchicine. Allopurinol or other xanthine oxidase inhibitors are used to prevent future occurrences. Additionally, conservative treatment such as weight loss, avoiding purine-rich food and alcoholic beverages, are adjunctive measures to help alleviate symptoms.[8]

Hallux rigidus is a degenerative joint disease of the MTP joint of the great toe. Patients typically present with a painful stiff toe with tenderness to palpation of the MTP joint dorsally. Osteophytes may be palpable dorsally on the physical exam. The most common physical exam finding is usually a decrease in active and passive range of motion, most notably dorsiflexion. On x-ray, there is the characteristic dorsal osteophyte and signs of osteoarthritis of the first MTP. Treatment includes NSAIDs, activity and shoe modification, and intra-articular injections. It may also be treated surgically.[9]

Hallux valgus (bunion) is valgus deviation of the proximal phalanx which promotes varus posturing of the first metatarsal. The metatarsal head is displaced medially leaving the sesamoids uncovered. The medial capsule becomes attenuated and the lateral joint capsule is contracted. Risks factors are both intrinsic and extrinsic. There is a genetic predisposition in addition to biomechanical factors related to the first ray that may lead to bunion deformity.  High-heeled shoes with a narrow toe box can also lead to deformity. Bunions are more common in adults, primarily women, but are also common in children, termed juvenile hallux valgus. Patients present complaining of pain exacerbated by shoe wear. Physical examination reveals a wide forefoot with tenderness over the first metatarsal head and a valgus deviation of the phalanx.  Conservative treatment consists of shoe modification and the avoidance of high-heeled footwear. Juvenile hallux valgus should be treated conservatively as long as possible. Patients who fail conservative treatment may be treated surgically. Surgical treatment depends on the deformity.[10][11][12] 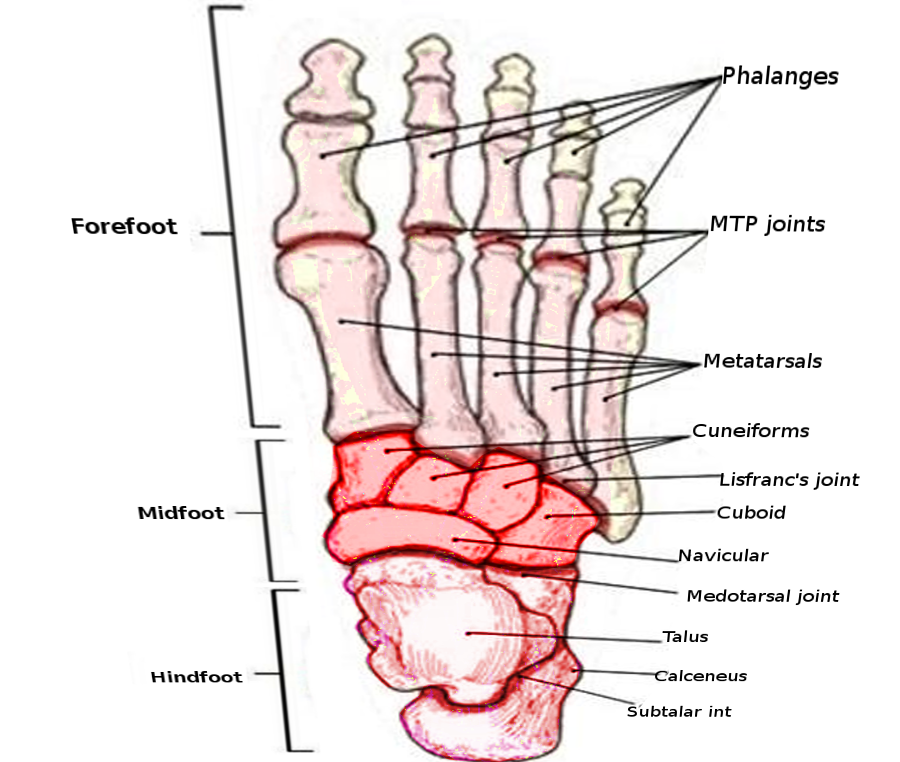