The ankle joint is a hinged synovial joint that is formed by the articulation of the talus, tibia, and fibula bones. The articular facet of the lateral malleolus (bony prominence on the lower fibula) forms the lateral border of the ankle joint while the articular facet of the medial malleolus (bony prominence on the lower tibia) forms the medial border of the joint. The superior portion of the ankle joint forms from the inferior articular surface of the tibia and the superior margin of the talus. Together, these three borders form the ankle mortise.

The talus articulates inferiorly with the calcaneus and anteriorly with the navicular. The upper surface, called the trochlear surface, is somewhat cylindrical and allows for dorsiflexion and plantarflexion of the ankle. The talus is wider anteriorly and more narrow posteriorly. It forms a wedge that fits between the medial and lateral malleoli making dorsiflexion the most stable position for the ankle.

The anterior drawer test is used to examine the integrity of the anterior talofibular ligament (ATFL) and utilizes the anterior translation of the talus under the tibia. The test is performed by stabilizing the distal tibia (and fibula) with one hand while the other hand holds the calcaneus and puts the ankle in slight dorsiflexion. The calcaneus is then translated anteriorly while simultaneously translating the leg (distal tibia and fibula) posteriorly. Excessive talar anterior translation on the injured side compared to the uninjured side is indicative of a positive test.

The talar tilt test, also known as the inversion stress test, is used to test the integrity of calcaneofibular ligament. The examiner performs this test by stabilizing the distal tibia (and fibula) with one hand and inverting the ankle while it is in the neutral position. Pain elicited at the area of the ligament indicates a positive test.

The eversion stress test is used to assess for a deltoid ligament injury. It is performed by everting and abducting the heel while stabilizing the tibia (and fibula). Increased laxity or pain indicates a positive test.[3]

Innervation to the lower leg originates from the lumbar plexus and the sacral plexus.

The sciatic nerve forms from the sacral plexus, which further branches into the tibial and common fibular nerve.

The common fibular nerve travels around the fibular head and subdivides into the superficial and deep peroneal nerves.

Ankle fractures are common in all ages with the involvement of one or both malleoli. The fracture pattern determines the stability of the fracture. Patients typically present with pain, swelling, and inability to bear weight on the ankle joint. Management of stable fractures includes a short leg cast for 4 to 6 weeks. Unstable fractures require an open reduction and internal fixation (ORIF) to restore a congruent mortise and fibular length.

The Lauge-Hansen and AO classifications are tools used to help determine the prognosis and treatment of ankle fractures. The Lauge-Hansen classification has its basis on the foot position and the mechanism of injury. Fractures classify into four different groups: supination-adduction, supination-external rotation, pronation-abduction, pronation-external rotation. The first term describes the position of the foot during an injury while the second refers to the direction of force applied to the ankle.

This injury usually occurs from a high energy injury like a motor vehicle accident or a fall from a height. The talus has a tenuous blood supply and is at high risk of avascular necrosis (AVN) in displaced fractures. The Hawkins classification helps to predict the chance that AVN will occur. There are four different types of talus fractures, with type I having the best prognosis and type IV predicting a hundred percent chance of developing AVN. Type I is a nondisplaced fracture of the talar neck, type II is a subtalar dislocation. Type III is similar to type II, but with tibiotalar dislocation, type IV is similar to type III but with a talonavicular dislocation. Determining the type of fracture is not only important for predicting the chance of AVN, but it is also important for determining the type of treatment needed. Type I fractures are usually treated with percutaneous pins while types II-IV are treated with open reduction and internal fixation (ORIF).[9]

Simple guidelines to identify patients with ankle or midfoot injury who do not need X-ray. Ankle X-ray is necessary if any of the following are present.[10] 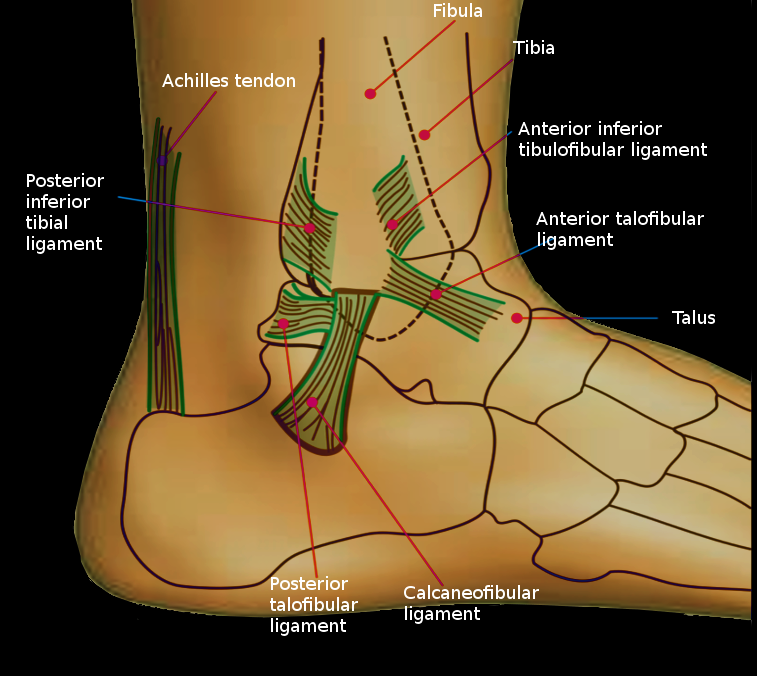