The infratemporal fossa encompasses a space that contains a wide variance of embryologic derivation. The mandible and the maxillary artery are formed from the first pharyngeal arch, also known as the mandibular arch. Other anterior bones of the face that participate in the boundaries of the infratemporal fossa, including the maxilla, temporal bone, and zygomatic bone, derive from the mesenchyme of neural crest cells and undergo membranous ossification.[4]

Nerves coursing through and around the infratemporal fossa are responsible for providing a vast majority of sensory and motor function to the lower face and other important structures such as the dura mater. The largest of these nerves is the mandibular branch of the trigeminal nerve that passes through the foramen ovale of the sphenoid before entering the infratemporal fossa. The mandibular nerve bifurcates into a smaller anterior branch and a larger posterior branch. Just before this bifurcation, the mandibular nerve gives off motor nerves to supply the medial pterygoid, tensor tympani, and tensor veli palatini muscles, as well as the meningeal branch of the mandibular which supplies the dura mater.

Following the bifurcation, the anterior division of the mandibular nerve provides motor supply to the masseter, temporalis, and lateral pterygoid muscles via individual branches. Additionally, the buccal nerve from the anterior division courses between the two heads of the lateral pterygoid to provide sensory innervation from the buccal membrane in the oral cavity and the posterior lower second and third molar teeth.

The larger posterior division of the mandibular nerve gives rise to three main nerves: the auriculotemporal, lingual, and inferior alveolar nerves. Both the inferior alveolar and lingual nerves course between the lateral and medial pterygoid muscles, crossing the lateral side of the medial pterygoid. The inferior alveolar provides sensation to the lower teeth and terminates as the mental nerve, providing sensation to the lower lip and chin. The inferior alveolar nerve also provides the motor function to the mylohyoid and anterior digastric muscles. The lingual nerve carries general sensation from the anterior two-thirds of the tongue. The lingual nerve is joined by the chorda tympani nerve in the infratemporal fossa to provide presynaptic parasympathetic axons to the submandibular ganglion from the facial nerve. The chorda tympani nerve is also responsible for carrying taste sensation from the anterior two-thirds of the tongue. The auriculotemporal branch of the posterior division is a sensory nerve supplying various regions on the lateral portion of the head.

Further autonomic nervous system association within the infratemporal fossa includes the otic ganglion on the medial side of the mandibular nerve close to the foramen ovale. The otic ganglion is presynaptically linked with the glossopharyngeal nerve, and postsynaptic parasympathetic axons innervate the parotid gland by joining fibers of the auriculotemporal nerve.[1][3]

The tensor veli palatini and levator veli palatini are two muscles also seen in the infratemporal fossa that interact to facilitate elevation of the palate to prevent food from entering the nasopharynx when swallowing. Additionally, the contraction of both muscles allows the opening of the Eustachian tube to equalize the pressure between the middle ear and nasopharynx.[1][6]

The classic lateral approach to the infratemporal fossa involves beginning with a posterior auricular incision. This is followed by mastoidectomy, parotidectomy with facial nerve dissection, and disarticulation of the mandible from the temporomandibular joint. Disarticulation of the mandibular joint is performed instead of mastication muscle dissection due to severe trismus that can occur from fibrosis of the muscles following incision and healing. The lateral approach provides great exposure to the entire unilateral infratemporal fossa and good control over vasculature. Disadvantages of this approach include an increased risk of hearing loss, facial nerve weakness, and temporomandibular joint dysfunction.

The anterior approach involves utilizing the airspace of the maxillary sinus and can be performed either endoscopically or the traditional open approach depending on the degree of pathology. The traditional transmaxillary approach involves a facial dissection followed by Le Fort osteotomy, maxillary sinusotomy, and maxillectomy. Advantages of this approach include safety margins provided by the natural airspace within the sinus cavities. Disadvantages include limited exposure to the infratemporal fossa and distal access point.

The clinical significance of the infratemporal fossa involves neoplastic and infectious processes that can either arise from this area or spread to it. Pathology found in this region tends to spread posteriorly due to anterior, medial, and lateral bony barriers present in the infratemporal fossa. Symptoms experienced from pathology present in this region include trismus and any manifestation of mandibular nerve compression including paresis of mastication muscles, numbness or loss of taste sensation from the tongue, anesthesia of the gums, or speech articulation difficulties.

Neoplastic tumors that have been documented in the infratemporal fossa are numerous and include rhabdomyosarcoma, liposarcoma, fibrosarcoma, meningioma, hemangioma, and peripheral nerve sheath tumors arising from any of the nerves in this region. Schwannomas and neurofibromas are typically found between the pterygoid muscles due to the location of the lingual and inferior alveolar nerves in this region. Hemangiomas arising from the pterygoid venous plexus can also be seen in this area often between the lateral pterygoid and temporalis muscles. 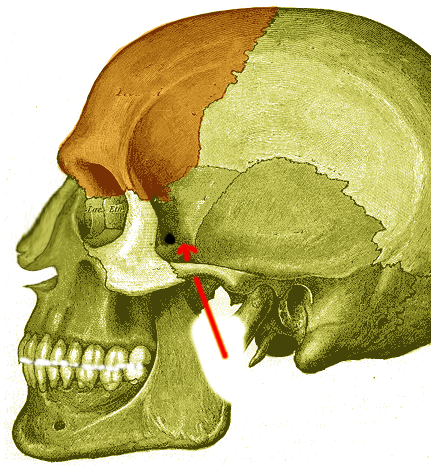