The small intestine is a crucial component of the digestive system that allows for the breakdown and absorption of important nutrients that permits the body to function at its peak performance. The small intestine accomplishes this via a complex network of blood vessels, nerves, and muscles that work together to achieve this task. It is a massive organ that has an average length of 3 to 5 meters. It divides into the duodenum, jejunum, and ileum.[1][2][3]

Layers of the Small Intestine

Of importance is the mesentery, which is a double fold of the peritoneum that not only anchors the small intestines to the back of the abdominal wall, but also contains the blood vessels, nerves, and lymphatic vessels that supply the small intestine.[4][5]

The principal function of the small intestine is to break down food, absorb nutrients needed for the body, and get rid of the unnecessary components. It also plays a role in the immune system, acting as a barrier to a multitude of flora that inhabits the gut and to make sure no harmful bacteria enter the body.

The small intestine comes from the primitive gut, which forms from the endodermal lining. The endodermal layer gives rise to the inner epithelial lining of the digestive tract, which is surrounded by the splanchnic mesoderm that makes up the muscular connective tissue and all the other layers of the small intestine. The jejunum and ileum come from the midgut, whereas the duodenum derives from the foregut.

The arterial blood supply for the small intestine first comes from the celiac trunk and the superior mesenteric artery (SMA).

The venous blood mimics that of the arterial supply, which coalesces into the superior mesenteric vein (SMV), which then joins with the splenic vein to form the portal vein.

Two layers of smooth muscle form the small intestine. The outermost layer is the thin, longitudinal muscle that contracts, relaxes, shortens, and lengthens the gut allowing food to move in one direction. The innermost layer is a thicker, circular muscle. This layer enables the gut to contract and break apart larger food particles. It also stops food from moving in the wrong direction by blocking the more proximal end. The two muscle layers work together to propagate food from the proximal end to the distal end. 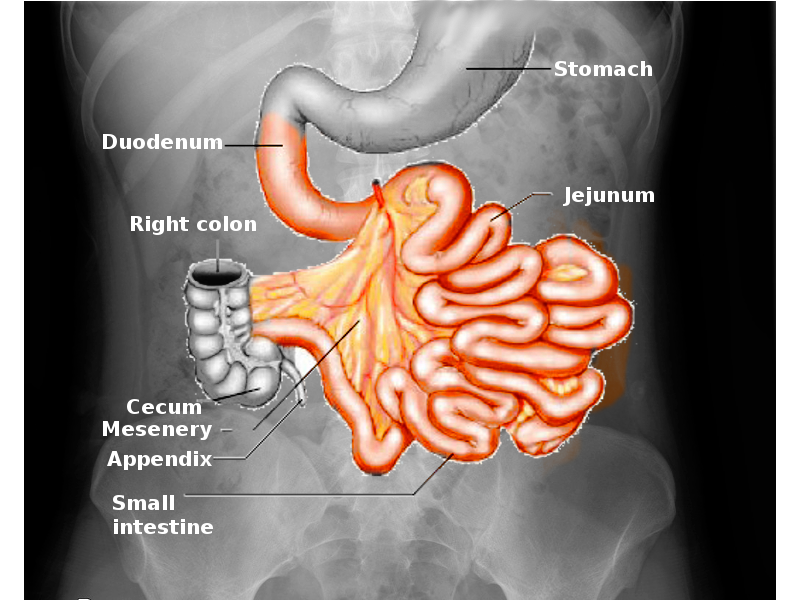