A disaster, as defined by the Federal Emergency Management Agency (FEMA), is “a non-routine event that exceeds the capacity of the affected area to respond to it in such a way as to save lives; to preserve property; and to maintain the social, ecological, economic, and political stability of the affected region."

When a disaster occurs, the Stafford Act allows the state governor or tribal leader (hereafter “governor”) of the affected area to petition the President of the United States for a disaster declaration, which mobilizes federal resources to augment local resources in the aftermath of the disaster.  Local and state resources are expected to be able to manage the first 72 hours of an incident, after which federal resources can support and augment local efforts but not supplant them.

In the aftermath of a disaster, the local response includes the following:

The state’s responsibility following a disaster includes evaluating SITREPS, response efforts and requests for assistance provided by locales, activating the State Emergency Operations Center and determining whether federal assistance is needed. The governor of the state may also proclaim a “State of Emergency” which will put into motion the state disaster preparedness plan which allows for activation of state resources and request for federal resources through the Stafford Act or other applicable federal programs if needed.

Once a disaster has occurred and it is apparent that the area’s recovery needs outweigh the scope of local resources, the governor will contact their local FEMA office to request a joint federal-state/tribal preliminary damage assessment (PDA). This assessment should outline how and why the local government resources are inadequate to address the local disaster. In conjunction with local representatives, the federal team conducts an assessment of the affected area to determine the extent of the disaster, who and what public resources are affected, and what federal assistance will be needed. The request for disaster declaration must be made through the local FEMA office within 30 days of the disaster.

The Process of Disaster Declaration

After completion of the PDA, the governor may petition the President via the regional FEMA office for a disaster declaration. Concurrently, the governor should execute the region’s emergency plan. He or she is responsible for detailing what local resources are committed to disaster relief, estimating the damage to public and private sector assets, and giving an estimate of what resources are needed under the Stafford Act.

Once federal assistance has been approved, FEMA will activate the Federal Response Plan and assign a federal coordinating officer to lead the Emergency Response Team. This team works directly with the state coordinating officer to provide a coordinated response to local and state needs. They will also activate the Federal Response Plan which coordinates federal agencies and the American Red Cross relief efforts. Additionally, FEMA will activate a Washington-based Emergency Support Team to monitor ongoing efforts.

Emergency Declarations are employed for any situation where federal assistance is needed. Assistance may not exceed $5 million unless the president seeks additional approval by Congress. State or Tribal governments may request a pre-disaster declaration when there are imminently anticipated needs prior to the actual event. Under this type of declaration, there are limited resources that the federal government may provide. There are two types of assistance under this program, Public Assistance, and Individual Assistance. States or Tribal Governments are not prohibited from seeking a Major Disaster Declaration if the needs of the locale exceed the resources provided by the Emergency Declaration. For an Emergency Declaration, the governor must describe other federal agency resources that have already been utilized and how much additional federal assistance is required.

Major Disaster Declarations can be made for any naturally occurring disaster or regardless of cause, any damage caused by fire, explosions or floods when it is estimated that damages will outstrip local and state resources. Relief can include public and individual emergency assistance and permanent work. For a Major Disaster Declaration, the local leader must submit with their request the estimated cost of the disaster to the local private and public sector, estimates of how much assistance is needed from the Stafford Act, and the governor must certify that they will comply with applicable cost-sharing requirements.

Because indeed, “all disasters are local,” individuals and locales are expected to be wholly self-sustaining following a disaster for 72 hours. This sustenance includes food, water, shelter, medication, and other personal or local necessities. Once federal resources are deployed they are intended to supplement, but not replace, local resources and local governments maintain control of all assets used for disaster response. Federal and local disaster recovery assets (including specially trained personnel and equipment) can, and should be, deployed and staged in advance of imminent disasters so that recovery response is accessible to the areas most affected promptly.

Generally, disaster response is thought to be directly proportional to the need generated by the disaster. However, evaluation of responses to Hurricanes Harvey, Irma and Maria revealed that Puerto Rico was not equitably compensated when compared to Florida and Houston in the aftermath of each disaster. Disproportionate compensation decreases health equity in the wake of a disaster.[1] Public health is difficult to manage under ideal circumstances; efforts have been made worldwide to create frameworks for public health disaster preparedness and response which encompass community needs, ethics, and values.[2] For example, in Riverside County, California, Public Health and Emergency Management officials developed an ethical framework for their disaster response plan using community ethics and values to address potential inequities during disaster response. Multiple community stakeholders were involved in the review and implementation of the plan to ensure that care disparities were not made even worse in the disaster response process.[3]

Resiliency is another concept that has been promulgated in disaster research. Disaster recovery actually starts with disaster preparation. Communities who treat disaster response along a continuum of time that begins before disasters happen have better long term health and recovery after disasters occur.[4]

Community resilience research has shown that all community members including individuals, businesses, private and non-profit agencies should participate in disaster preparedness. Community outreach and education are required to educate and engage the community in mitigating damage and recovering from disasters that will inevitably occur.[5]

Recovery after a disaster is more challenging for children, the elderly, those with disabilities and complex mental and physical health needs. Nearly half of the US population is described as potentially vulnerable in the aftermath of a disaster.[6] Previously, disaster recovery efforts have not accommodated the needs of this vulnerable population.[7] Lessons learned from prior disasters have informed changes to response efforts which account for those with specific health needs, including involving community-based organizations who represent vulnerable groups in disaster planning, disseminating information to communities on various platforms to consider for those who are blind or deaf and the potential use of Telehealth to evaluate and treat patients remotely.[8][9]

During a disaster event, it is critical that an interprofessional approach to the health needs of the community be in place, where physicians, mid-level practitioners, nurses, pharmacists, and other qualified personnel (e.g., EMTs) work collaboratively in an "all hands on deck" fashion. This collaboration can help to bring bout the best resolution for both the community as a whole, as well as the individuals in the community with their particular requirements.

Hospitals, too, as large healthcare providers and community members are obligated to prepare for disaster response and increasingly have developed plans to most effectively address the needs of a potentially large influx of patients during a disaster response.  Community Health Care coalitions have been proposed to join local healthcare stakeholders in knowledge and resource-sharing in the event of a community disaster.[10] 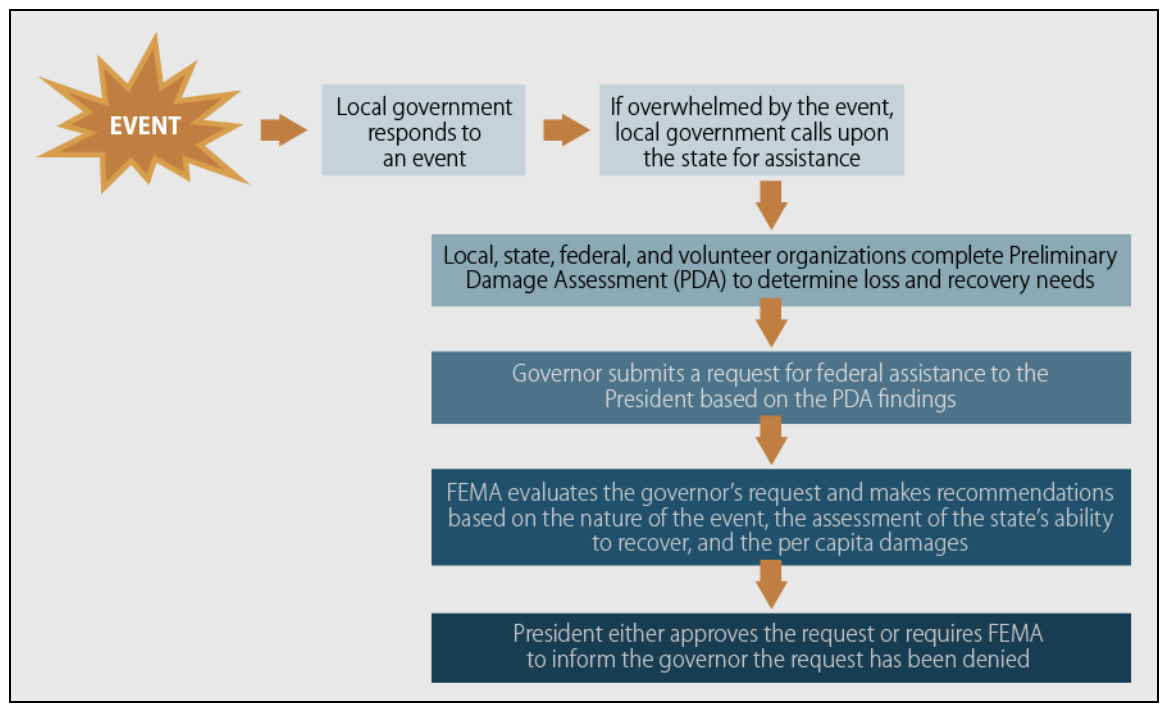