Winging of the Scapula

In a patient who has a winged scapula, the medial (or in some cases, lateral) aspect of the scapula appears to be protruding from the back. As the name of the condition implies, it can create a winged appearance. This abnormal position of the scapula can lead to many physical functional disabilities such as pain, decreased strength, and range of motion disruptions. The ranges of motion that are most commonly affected are abduction and flexion of the affected upper extremity. This activity reviews the causes and presentation of winging of the scapula and stresses the role of the interprofessional team in the management of patients with this condition.

In a patient with a winged scapula, the medial or lateral aspect of the scapula appears to be protruding from the back. As the name of the condition implies, it can create a winged appearance. This abnormal position of the scapula can lead to many physical functional disabilities such as pain, decreased strength, and range of motion disruptions. The ranges of motion that are typically abnormal are abduction and flexion of the affected upper extremity.

The most common etiology of a winged scapula is usually due to damage or impaired innervation to the serratus anterior muscle. The nerve that innervates this muscle is the long thoracic nerve. Sometimes, this nerve can be damaged or impinged, leading to malfunction of the serratus anterior muscle. Some patients may also complain of an inability to raise the affected arm above their head. This dysfunction results in the medial border of the scapula giving a winged-like appearance. The impingement or damage of this nerve leads to the winged appearance because the serratus anterior muscle attaches to the medial aspect of the scapula and holds it against the posterior rib cage. Less commonly, the scapula can wing laterally due to damage to the trapezius or rhomboid muscles, which are innervated by the spinal accessory nerves and dorsal scapular nerve, respectively. The scapula will move laterally due to unopposed muscle strength attributed to the trapezium or rhomboid paralysis or weakness; this occurs because the function of the trapezius muscle is to elevate, retract and rotate the scapula.

One patient population that is noted to present with scapular winging are women who have undergone chest surgery, as in breast cancer patients who have undergone a radical mastectomy.[1] During the procedure, the long thoracic nerve can suffer damage due to its proximity to the other involved structures. Specifically, mastectomies that involve resection of the axillary lymph nodes are at higher risk as the long thoracic nerve lies near the axillae and is at risk of being damaged during the lymph node resection.

Another relatively common cause is trapezius muscle paralysis which may occur during neck dissection leading to injury to the spinal accessory nerve. Paralysis of the serratus anterior muscle has been well documented in many sporting events and certain occupations (car mechanics, carpenters, laborers, etc.)

A primary winged scapula results from an injury to the nerve, changes in the scapula bone itself, or periscapular soft tissue abnormalities. Remember, the serratus anterior muscle attaches to the medial aspect of the scapula and attaches it to the rib cage. If it loses innervation by the long thoracic nerve, it can no longer provide stability to the scapula, leading to medial scapular winging. Again, lateral scapular winging is due to damage to the trapezius or rhomboid muscles. The scapula will move laterally due to unopposed muscle strength attributed to the trapezium or rhomboid paralysis or weakness. The trapezius is solely innervated by the spinal accessory nerve, which crosses the posterior cervical triangle superficially, where it can be damaged during occipital lymph node biopsy. The dorsal scapular nerve innervates the rhomboid muscles.

A secondary winged scapula occurs due to glenohumeral and subacromial conditions and should resolve after addressing the pathological condition causing the winging. A winged scapula caused by trauma is uncommon.

Classically, patients present and pain and weakness related to movements involving the scapula. The classic findings are difficulty with elevating the arm above the head and lifting objects.[2] Due to multiple different etiologies of a winged scapula, the histories gathered from presenting patients may differ. In one study, the pain was not associated with every case, whereas fatigue was a significant characteristic.[3] On physical exam, providers should be able to recognize deformation of the back due to a protrusion of the medial portion of the scapula, which is not anchored against the rib cage. Due to this muscle pathology, the movement involving upward rotation, abduction, and there is a limitation of elevation of the scapula due to weakness or pain. One clinical test that providers can use to assess patients is to have the patient face a wall and stand with the affected arm out in front of their body, parallel to the floor. The patient should then be instructed to push against the wall with the palm of their hand on the affected side. A protrusion of the medial portion of the scapula should then be apparent.

In most cases, winging of the scapula is not seen immediately but may take weeks to become obvious.

In most cases, the practitioner can evaluate scapular winging with a proper history and physical examination. Electrodiagnostic testing can help to establish the underlying neuromuscular pathology. Furthermore, neuromuscular ultrasound can be used to establish the muscular pathology and the neurologic causes of the muscle pathology. Ultrasound can be used to provide for a painless and radiation-free imaging method that can be used to evaluate for winging of the scapula.[4] More specific methods for scapular winging evaluation include electromyography and nerve conduction studies. These studies are sensitive and specific in determining the exact nerve involved in the pathology and the location of the damage by recording the electrical activity produced by muscles and evaluating how fast an impulse moves through a specific nerve.[5] The benefit of these evaluation measures is that early diagnosis and early treatment can help prevent more severe shoulder dysfunction.

Management of winged scapula is primarily achieved utilizing conservative measures such as pain control and physical therapy. Physical therapy helps to preserve the range of motion of the affected extremity as well as prevent possible complications such as adhesive capsulitis. Most people who have scapular winging and receive early treatment can achieve full recovery. In many cases, patients learn to compensate for the serratus anterior palsy by utilizing the trapezius muscle. With conservative therapy, the recovery may take months or years. If no recovery has occurred within this time, it is unlikely that the patient will recover.

Surgical procedures to manage scapular winging include scapulothoracic arthrodesis and scapulopexy without arthrodesis. In these procedures, the scapula is fused to the third to sixth ribs to prevent potential dyskinesis and winging. Muscle transfer is also an option in some patients where the sternal head of the pectoralis major is transferred to the inferior angle of the scapula. However, this procedure is not recommended for athletes or individuals involved in heavy labor.

Unlike serratus anterior muscle palsy, which can help recovery with conservative management, paralysis of the trapezius rarely improves with such treatment. While pain may improve with exercise, the neck asymmetry does not. In many cases, exploration and nerve repair yields better results. In young, healthy individuals, lateral transfer of the levator scapula and rhomboid muscles to the scapula has proven durable and effective. Finally, some patients may benefit from botulinum toxin, but the therapy is temporary and prohibitively expensive in the long run.

Those presenting with signs and symptoms of scapular winging can present similarly to other pathologies of the upper extremities and scapula. The pain and associated weakness and discomfort of the upper extremity are seen in other diagnoses as well [5]. Some presentations can appear similar to rotator cuff disorders due to the limited motion and weakness with the associated arm. Glenohumeral instability is also a differential diagnosis as the patient may report instability of the shoulder. However, when the diagnosis is scapular winging, it is the instability of the scapula rather than the glenohumeral joint. Peripheral nerve disorders, cervical spine disease could also mimic scapular winging and should be ruled out. Thoracic outlet syndrome and acromioclavicular disorders might also be included in the differential, likely because the presentation of associated pain and weakness with the affected anatomy can be similar.

Currently, no treatment method is considered to be the first line for the resolution of scapular winging. As discussed prior, the recommended treatment for initial treatment is pain control and physical therapy.[3] If treatment is not initiated early on in the progression of the condition, patients can develop subsequent issues such as adhesive capsulitis (or frozen shoulder), subacromial impingement, and other pathogenesis involving the brachial plexus.

Like many other clinical pathologies, it is best to practice preventative measures to avoid scapular winging and try to treat it once it has manifested in symptoms. The course of clinical cases in winging of the scapula can persist for up to two years. Most patients eventually recover, but at least one-fourth may have residual pain.[7]

An interprofessional healthcare team providing care to a patient with scapular winging is crucial in ensuring the best health outcome of the individual. The integrated postoperative care given to the patient can determine whether the patient will make a full recovery or to what extent. When the patient is under post-operative management, all interprofessional team members, including the nurse and physical therapist involved in patient care, should be made aware of scapular winging as a potential complication. Thus, nurses who work closely with the patients can monitor and know what to look for to alert the medical team. The pharmacist should educate the patient on pain management, and the physical therapist should recommend the relevant exercises. That way, early and effective intervention can commence before the patient presents with symptoms. Prevention of this condition will clearly lead to the best outcomes for patient care. Interprofessional care can lead to the best success in the planning and evaluation of patient progress in recovery. Interprofessional collaboration is guaranteed to result in a better prognosis and outcome for the patient as an integrated approach to care.[8] [Level 5] 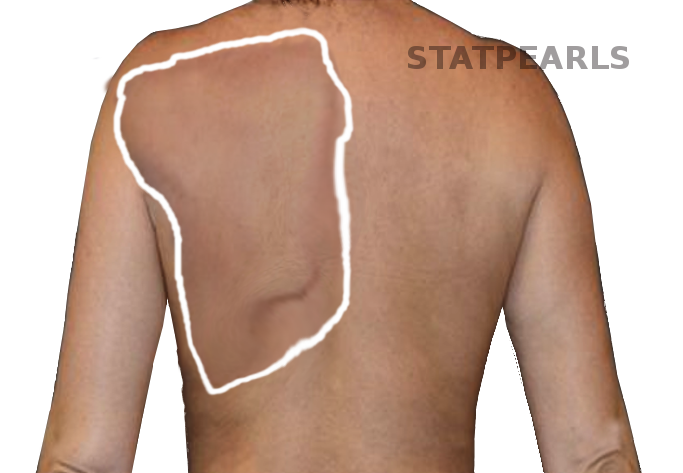 Winging of the Scapula

Saied GM,Kamel RM,Dessouki NR, The effect of mastectomy and radiotherapy for breast carcinoma on soft tissues of the shoulder and its joint mobility among Egyptian patients. Tanzania health research bulletin. 2007 May;     [PubMed PMID: 17722415]

LURJE A, Concerning surgical treatment of traumatic injury of the upper division of the brachial plexus (Erb's-type). Annals of surgery. 1948 Feb;     [PubMed PMID: 18905933]