Vitiligo is a common acquired skin disorder which results from the loss of melanocytes from the epidermis and clinically manifests as well-demarcated white patches on the body. There are different theories about the pathogenesis of vitiligo but exact etiology is still unknown. It is a form of autoimmune disorder. This activity reviews the role of the interprofessional team in the diagnosis and treatment of this condition.

Vitiligo is an acquired pigmentary skin disorder by the absence of pigmentary cells from the epidermis that results in white macules and patches on the body.[1] The condition is usually associated with few autoimmune disorders, with thyroid abnormalities are the commonest one. The etiology of vitiligo is unknown but there are different theories to explain its pathogenesis. Vitiligo presents clinically with signs and symptoms of white spots on the body distributed symmetrically and more obvious in people with dark skin. The lesions are characterized by well-demarcated pearly white or depigmented macules and patches, oval, round, or linear-shaped, and the borders are convex, range from the size of few millimeters to centimeters and enlarge centrifugally. There are different clinical variants of vitiligo which are Trichrome, Marginal inflammatory, and Quadrichrome vitiligo. Koebner phenomenon(Development of vitiligo at specific trauma prone sites, like cut, burn, or abrasion)is also a common clinical manifestation. Initial lesions occur most frequently on the hands, forearms, feet, and face, favoring a periocular or perioral distribution.[2][3]

On the basis of the distribution, pattern Vitiligo is classified into three types, generalized, segmental, and localized. The severity of the disease is scored by the body surface area affected. The course of the disease is often unpredictable and varies in response to the treatment. Depigmentation often the cause of psychological distress, social stigmatization, and low self-esteem.[3]

The exact etiology of vitiligo is unknown. It is frequently associated with multiple autoimmune diseases. There are various theories about its pathogenesis and the etiology is multifactorial. It is characterized by incomplete penetrance, genetic heterogeneity, and multiple susceptibility loci. Family and other twin studies have shown that inheritance is complex and also involves both environmental and genetic factors. Additionally, it is hypothesized that genetic factors can influence the age of onset of vitiligo. The inheritance of vitiligo may also include genes associated with the biosynthesis of melanin, regulation of autoantibodies, and response to oxidative stress.[4]

Recent research studies have not highlighted any associations with any certain HLA type. There is a strong reason to believe that segmental and nonsegmental vitiligo have a unique genetic mechanism, which can account for variable treatment responses.[5]

Vitiligo is the commonest cause of depigmentation. It can appear at any age from child to adulthood but peak incidence is reported in the second and third decade. The age of onset usually varies between the sexes. Its prevalence is approximately 0.1% to 2% of people including adults and children worldwide and it affects all races equally.[6]

In the neural hypothesis, a neurochemical mediator usually destroys the melanocytes and decreases the production of melanin. In oxidant and anti-oxidant mechanism intermediate or metabolic product of melanin synthesis causes the destruction of the melanocyte.[7] In the intrinsic defect of melanocyte, there is an inherent abnormality that impedes their growth and differentiation. Another hypothesis is autoimmune or cytotoxic one where there is an alteration in humoral and cellular immunity that causes the destruction or dysfunction of melanocytes. This theory supports the hypothesis that nonsegmental vitiligo is commonly associated with autoimmune disorders than the segmental type of vitiligo.

The basic histopathological findings in vitiligo is a total loss of functioning melanocytes in association with the complete loss of epidermal pigmentation (determined by Fontana-Masson stain or dohydrophenylalanine. Immunohistochemistry for melanocyte-specific markers like Melan-A and HMB-45 and specific electron microscopy can also be used).[1]

In most cases, the diagnosis of vitiligo is very clear based on clinical findings but detailed history and examination are necessary for disease severity.[2]

Important points of history that are helpful in the diagnosis of vitiligo include:

The diagnosis of vitiligo is usually made on clinical features, through a wood light examination biopsy is sometimes helpful to differentiate vitiligo from other hypopigmented or depigmented disorders.[10] The histopathological examination of the skin reveals the absence of melanocytes and complete epidermal pigmentation loss. Superficial perifollicular and perivascular lymphocytic infiltrates may be present at the margin of the vitiligo lesions, due to the cell-mediated process that destroys the melanocytes.[11]

Other reported histological findings are:

Various types of topical and systemic medications, phototherapy, laser therapy, and surgical therapy are used for the treatment of vitiligo. Topical treatment, modalities include corticosteroids, calcineurin inhibitors, and vitamin-D analogs. Phototherapy is an effective treatment option. It induces repigmentation in most of the patients with early and localizes the disease. Narrowband UV-B is widely used, mostly two to three times in a week with 311-312nm wavelength. It has largely replaced the psoralen photochemotherapy because of its toxic side effects. Excimer Laser is used to treating limited, stable patches of vitiligo. In segmental vitiligo which is resistant to most of the treatments, Tacrolimus and systemic corticosteroids can be combined with it.[12] Afamelanotide and JAK inhibitor therapy are emerging treatments. Topical ruxolitinib was also found to be very effective(in 2019 randomized placebo-controlled, double-blind prospective trial)

It is a chronic skin condition with an unpredictable disease course and some patients may notice spontaneous repigmentation over the depigmented areas.[14] The prognosis depends upon the age of onset and the extent of disease. Early disease onset is usually associated with the involvement of greater body surface area and rate of progression. Few types and certain locations may be responsive to treatment. Refractory cases have been noted in patients presenting with segmental vitiligo and younger than 14 years of age. Most of the patients on treatment usually experience intermittent cycles of pigment loss and disease stabilization.[7]

Complications of vitiligo are social stigmatization and mental stress, eye involvement like iritis, depigmented skin is more prone to sunburn, skin cancer, and hearing loss because of loss of cochlear melanocytes. Other complications are related to medications like skin atrophy after prolonged use of topical steroids.

An interprofessional approach is very essential for such patients. Sometimes these patients need special referrals to respective specialties when present with another autoimmune disorder. In addition, for ocular complications consultation with an ophthalmologist and psychological ailments referral to mental health, specialists are important.

As vitiligo is a depigmented and slowly progressive disorder it affects the physical appearance of a patient, and because of this, it has a psychological and social impact. Visible lesions have been associated with more distress and stigmatization than non-visible lesions, lower quality of life is reported in patients with vitiligo. Psychiatric consultation is very important because of psychiatric morbidity. Patient education regarding the slow response of treatment or treatment failure is also necessary because the response to treatment is highly variable in different patients.

A multidisciplinary approach is important because vitiligo is associated with other autoimmune disorders. A proper collaboration and communication are very important. These patients present with multiple psychological disorders due to their appearance and unpredictable course. Psychological interventions are important. Cognitive-behavioral therapy, along with regular conventional treatment is very useful in improving the self-esteem confidence and quality of life of such patients, and it also influences the disease course. 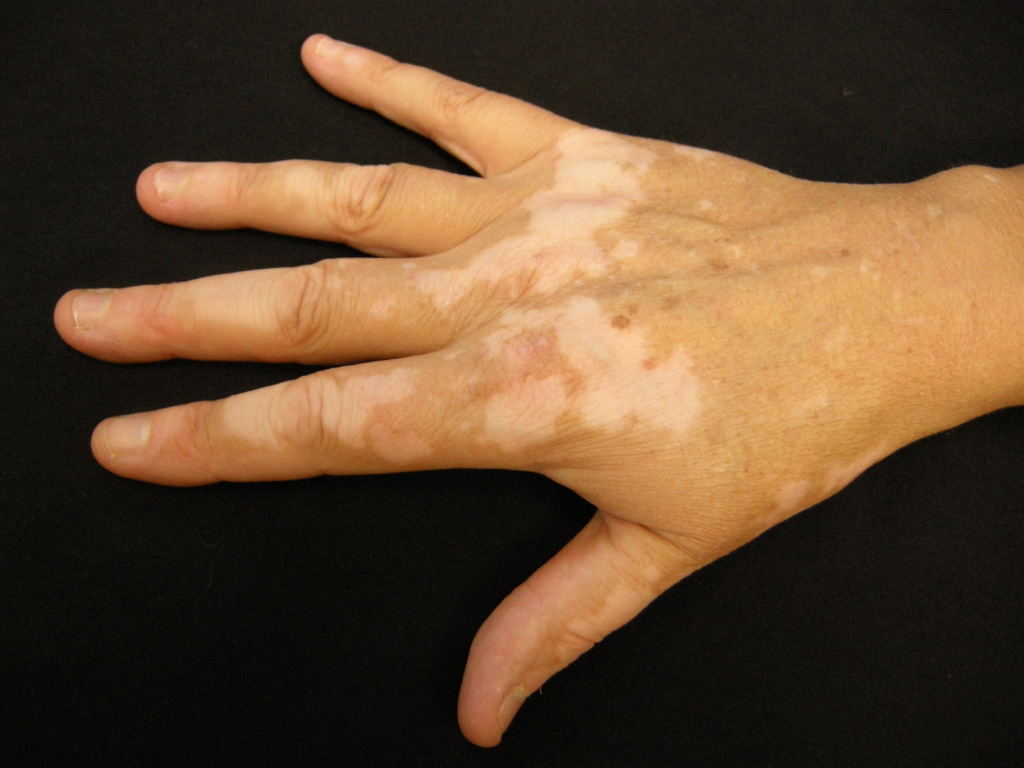 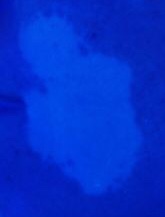 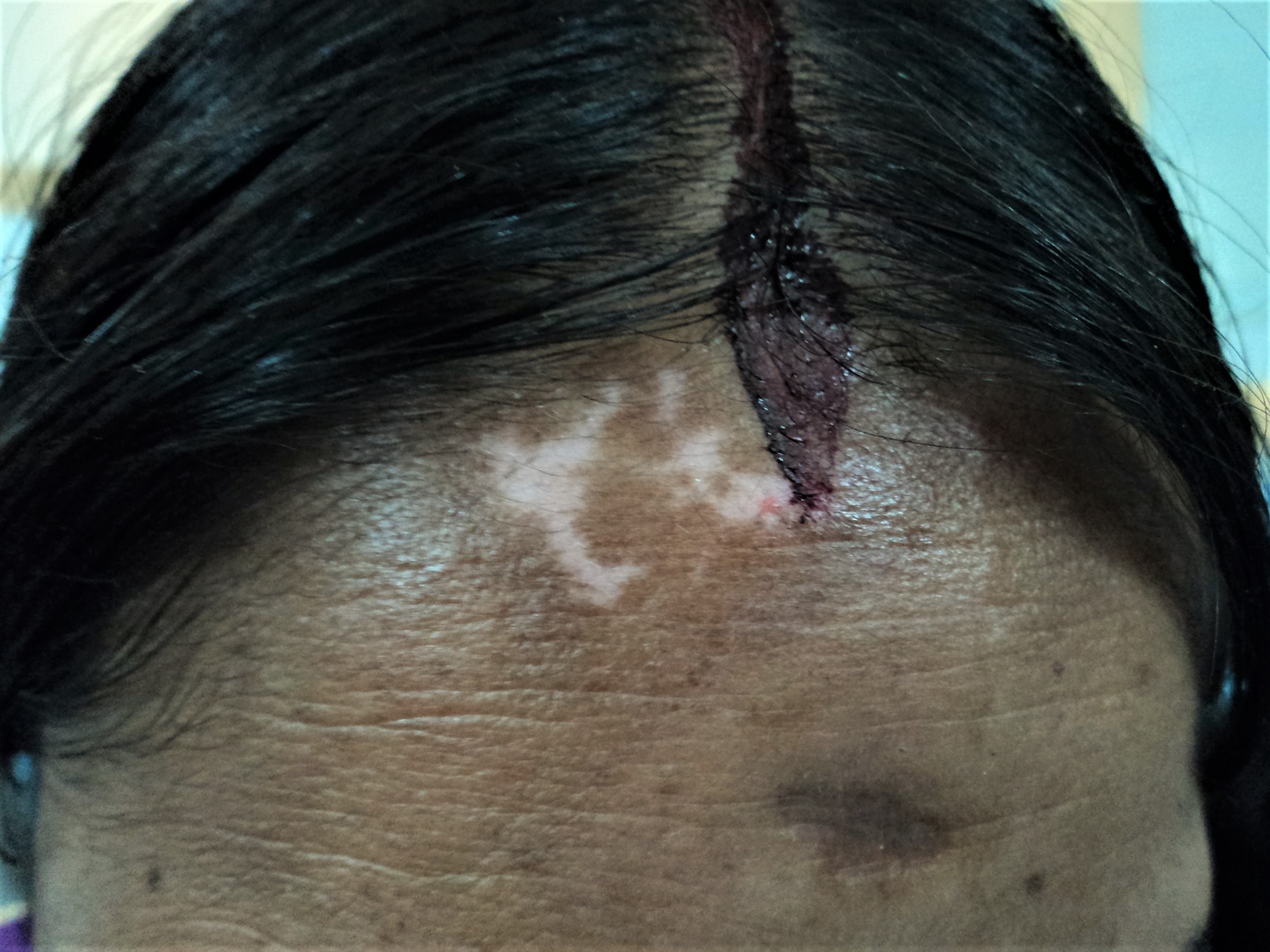 Figure 1. New vitiligo macules over the forehead of a recently married Indian lady, which appeared within 3 weeks of application of vermillion paste (maroon-colored) over the mid portion of the frontal scalp line.
Contributed by Sidharth Sonthalia, MD, DNB, MNAMS 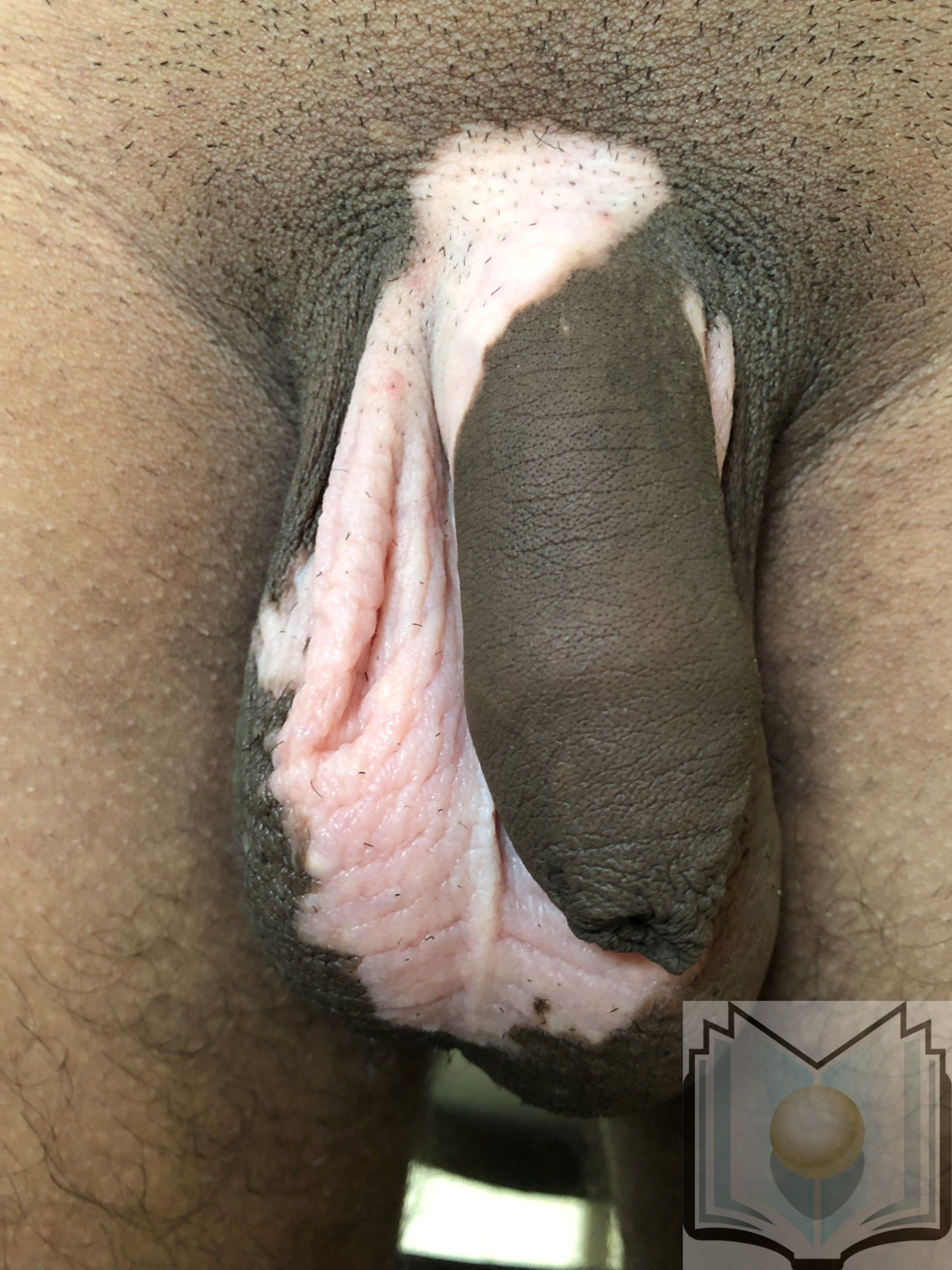 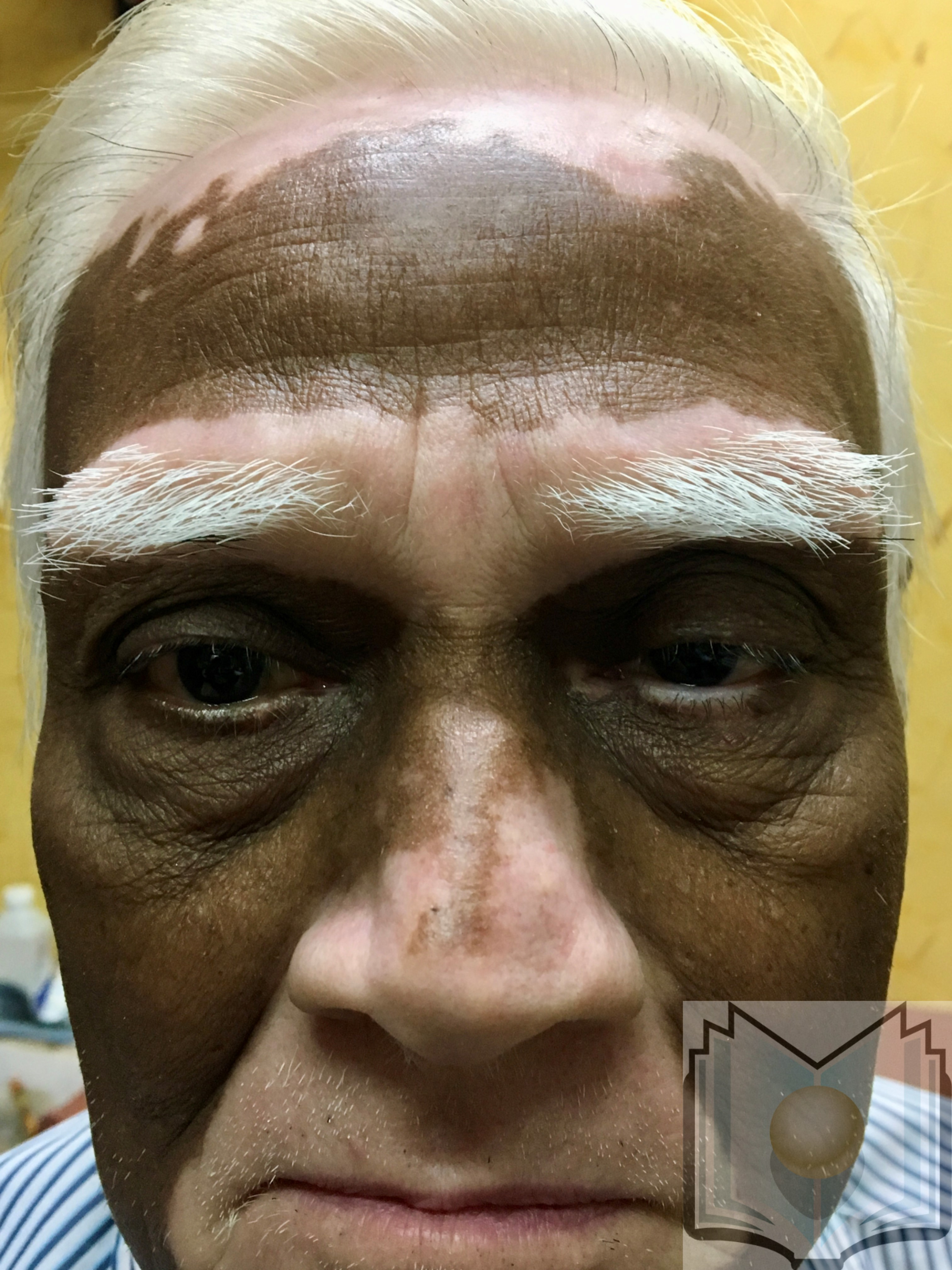 Eleftheriadou V, Reliability and validity of the Vitiligo Signs of Activity Score. The British journal of dermatology. 2020 May 26;     [PubMed PMID: 32458411]