Adenoma refers broadly to any benign tumor of glandular tissue. Adenomatous polyps are the most common type of polyp in the colon whose prevalence increases with age. Conventional type adenomatous polyps can be classified as tubular, villous, or tubulovillous. Villous features refer to finger-like or leaf-like epithelial projections, and villous adenomas are characterized by more than 75 percent villous features, Villous adenomas are associated with an increased risk of the development of neoplasia or dysplasia compared to other types of adenomas. This activity outlines the evaluation and management of villous adenomas and underscores the role of the interprofessional team in treating patients with this condition.

Adenoma refers broadly to any benign tumor of glandular tissue. This activity will address specifically adenomas of the colon, occurring within polyps. Colon polyps are a common entity, increasing in prevalence with age. Adenomatous polyps are the most common type of polyp in the colon, accounting for about 60 to 70% of all colonic polyps. Conventional type adenomatous polyps can be classified as tubular, villous, or tubulovillous. Villous adenomas are characterized by more than 75% villous features, where villous refers to finger-like or leaf-like epithelial projections. Tubulovillous adenomas have between 25 and 75% villous features. Less than 25% villous features indicate a tubular adenoma. Adenomas are usually asymptomatic and found on routine colorectal cancer screening. Adenomas with villous features may be associated with a slight increase in the development of more advanced neoplasia or dysplasia compared to other types of adenomas.[1][2][3]

Villous adenomas tend to occur more frequently in the rectosigmoid area but can occur elsewhere in the colon.

The risk of developing colorectal polyps is related to both environmental and genetic factors. The majority of polyps in the colon arise sporadically even though genetics play the most important role in influencing the individual risk of developing colon polyps and subsequent colorectal cancer. Personal history of colon adenomas places a patient at increased risk for the future development of colon cancer.[4][5][6]

Colorectal cancer has been shown to arise mainly from pre-existing adenomatous colon polyps. Adenomatous polyps form as mentioned above primarily in a sporadic fashion. The sporadic nature of these polyps is a result of either a mutation in the adenomatous coli pathway or DNA mismatch repair.

Familial adenomatous polyposis (FAP) is a genetic disorder that, in particular, predisposes affected patients to the development of multiple adenomatous polyps. FAP is an autosomal dominant disorder caused by a mutation in the tumor suppressor APC gene, located on chromosome 5q. This mutation can either be inherited or in as many as one out of three patients, can present as a new germline mutation. The frequency of FAP is from 1 in 8,000 to 1 in 14,000, with large numbers of adenomas occurring beginning in late childhood. Classically, patients with FAP have over 100 colorectal adenomatous polyps, but many patients have several hundred, or even thousands, of polyps. These patients usually develop adenocarcinoma by the age of 30 to 40. Even given the likely development of colon cancer in these patients, FAP only accounts for around 1% of colon cancers.

Adenomas are defined as possessing at least the characteristics of low-grade dysplasia. Some adenomas may progress over an extended period from low-grade dysplasia to high-grade dysplasia, carcinoma in situ, or invasive adenocarcinoma. Although physicians debate this, and the evidence does not completely confirm, thus far, if villous features indicate an increased risk of developing colorectal cancer, multiple studies demonstrate that histologic villous features of adenomas may be associated with developing advanced forms of neoplasia. Size at baseline of adenomas has been shown in some studies to influence future advanced disease; lesions greater than 1 cm increase a patient's risk. One source states that villous lesions have an increased risk of containing adenocarcinoma correlated to size specifically, with a 10% to 20% risk in adenomas larger than 2 cm, and a 5% risk in adenomas from 1 cm to 2 cm in size. However, these findings are inconsistent when considered across multiple studies regarding the subject. A recent study proposes using the overall sum of all adenoma diameters (called the adenoma bulk) at initial surveillance colonoscopy to stratify patients as either high or low-risk for predicting the development of advanced neoplasia. This study states that the adenoma bulk is comparatively predictive as the conventional current model using histology features when using a risk stratification cutoff of 10mm for the adenoma bulk, with high-risk adenoma bulk being greater than or equal to 10 mm. [4][5][6]

Risk factors for villous adenoma include the following:

The incidence of colon polyps increases in direct correlation with age. By age 50, colorectal cancer screening studies have demonstrated a prevalence of 25% to 30%, increasing to 50% by age 70 in high-risk Western countries such as the United States. Colon polyps are rare in the younger population, present in only one to four percent of 20 to 30-year-olds. Villous adenomas account for 5% to 15% of all adenomas.[7][8]

Before discussing what constitutes villous features of adenomas, it is important to differentiate the degree of dysplasia present in adenomas. The degree of dysplasia present in an adenoma is determined by both cytological and architectural features. Adenomas are tumors of dysplastic epithelium which can be characterized as having a low grade or high-grade dysplasia, which indicates the level of maturation of the epithelium. By definition, adenomas have at least low-grade dysplasia.

The cytological features of low-grade dysplasia include crowded, pseudo-stratification to early stratification of spindled or elongated nuclei that occupy the basal half of the cytoplasm. Pleomorphism and atypical mitoses should be absent or minimally present. Mitotic activity and minimal loss of cell polarity are allowed. Architecturally, the crypts should maintain a resemblance to the normal colon, without significant crowding, cribriform, or complex forms.

The majority of patients will not present symptomatically and subsequently, have a colonoscopy that identifies colorectal polyps. Rather, polyps are found on screening or surveillance colonoscopy. If patients do present with symptoms, commonly they will endorse a history of blood per rectum.

Polyps that are greater than 1 cm are more likely to cause symptoms like abdominal cramps, change in bowel habits, and rectal bleeding. Rarely a villous adenoma may induce secretory diarrhea resulting in dehydration and electrolyte deficiency.

Only about 40% of patients with villous adenoma will have a positive fecal occult blood test. Of these, about 2-10% may harbor colon cancer.

Double-contrast barium enema has better sensitivity compared to single contrast barium study. But barium enema is not sensitive when the polyp is less than 6 mm in diameter. In addition, poor bowel preparation can result in false positives. The presence of diverticular disease can lead to false negatives.

CT colonography is a novel method to assess the bowel but it still requires proper bowel preparation. Again, it is not sensitive for polyps that are less than 6 mm in diameter.

Endoscopy is the most sensitive method to assess for the presence of polyps and also allows for therapeutic intervention. While colonoscopy is better than other methods for evaluating polyps, it is also very operator-dependent. Difficulties with colonoscopy include patient discomfort, and the risk of perforation especially when a polyp is excised. Sigmoidoscopy only allows visualization of the bowel to 60 cm and patients often do not require full bowel preparation.

Surgeons should excise adenomatous polyps of any type completely and confirm clear margins. [9][10][11]Based on the morphology and a number of lesions removed, surveillance guidelines according to the American Cancer Society are as follows:

Surgery is necessary if the polyp is more than 2-3 cm, is sessile and the margins are not clean following a polypectomy.

While most villous adenomas are asymptomatic, they have the potential to cause obstruction, hemorrhage, and intussusception. However, the major concern with villous adenomas is the development of malignancy. Lesions larger than 1 cm have a high risk for malignancy.

The management of patients with colonic polyps is best done with an interprofessional team. Patients with colonic adenomas may be asymptomatic or present with rectal bleeding. In any patient over the age of 50 and no familial polyposis syndrome, one should always consider the possibility of a malignancy. The primary caregiver and nurse practitioner should refer these patients to a gastroenterologist or general surgeon for further workup and removal of the lesion. While the majority of colonic polyps are benign, villous adenomas tend to have a high rate of malignancy.

Patient education is vital because lifestyle changes may help prevent polyps. The patient should limit the intake of fat and meat products and ingest more vegetables. In addition, patients should consume more fiber and discontinue smoking. Nurses should educate the patient on the maintenance of healthy body weight, regular exercise, and abstaining from alcohol.

To ensure good outcomes the team should communicate with each other and make appropriate referrals on a timely basis. 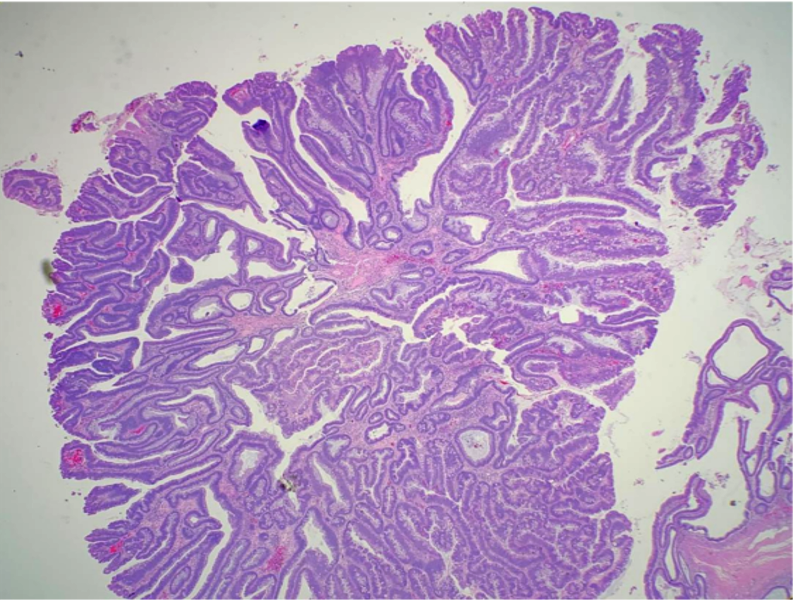