Warts are prevalent benign lesions caused by the human papillomavirus (HPV) that occur in the mucosa and skin. Warts may cause significant morbidity for affected individuals. This activity reviews the diagnostic evaluation and management of warts and highlights the role of the interprofessional team in educating patients about the required follow-up for this condition.

Warts are benign lesions that occur in the mucosa and skin. Warts are caused by the human papillomavirus (HPV), with over 100 types of HPV identified. HPV may occur at any site. The primary manifestations of HPV infection include common warts, genital warts, flat warts, deep palmoplantar warts (Myrmecia), focal epithelial hyperplasia, Epidermodysplasia verruciformis, and Plantar cysts. Warts may be transmitted by direct or indirect contact. Events that disrupt the normal epithelial barrier increase the likelihood of developing warts. Treatment may be difficult. Warts often resolve spontaneously within a few years. Some high-risk HPV subtypes are associated with malignancies, including types 6, 11, 16, 18, 31, and 35. Malignant transformation usually is seen in patients with genital warts and immunocompromised patients. HPV types 5, 8, 20, and 47 have oncogenic potential leading to epidermodysplasia verruciformis.

There are over 100 subtypes of the HPV virus, but only a few types can cause skin warts at selective anatomical sites. However, with skin contact, the HPV can be transferred to any part of the body. HPV tends to cause genital warts, flat warts, and palmoplantar warts. Warts are easily transmitted by direct or indirect contact, especially if there is the disruption of the normal epithelial barrier. Besides the skin, warts can also occur on mucous membranes. In general, HPV usually only infects the epithelial layers of skin, and systemic dissemination is very rare. The virus is known to replicate in the upper level of the epithelium, but the virus particles also can be found in the basal layer.

Warts are a common medical problem, especially in Whites.

Warts are common worldwide and affect approximately 10% of the population. In school-aged children, the prevalence is as high as 10% to 20%. They are more common among immunosuppressed patients and meat handlers.

Warts can occur at any age. Although rare in infancy and early childhood, prevalence increases among school-aged children and peaks at 12 to 16 years.

Warts are twice as common in Whites as in Blacks or Asians. Focal epithelial hyperplasia (Heck disease) is more prevalent in Inuit and American Indians.

The male-to-female ratio is approximately equal.

Out of the 100 subtypes of HPV, a few of them have the propensity to induce cancer. These subtypes include HPV strains 6, 11, 16, 18, 31, and 35. Malignant transformation tends to occur in individuals with genital warts and those who are immunocompromised. HPV strains 5, 8, 20, and 47 also have malignant potential in individuals with epidermodysplasia verruciformis.

Warts, in general, are benign, but there are reports that sometimes they may become malignant and develop into what is known as verrucous carcinoma. The verrucous carcinoma is a slow-growing tumor and is classified as a well-differentiated squamous cell malignancy that is often mistaken for a common wart. Even though it can occur on any part of the body, it is most common on the plantar surface. Verrucous cancer rarely spreads, but it is locally destructive.

Histopathologic features include acanthosis, digitated epidermal hyperplasia, papillomatosis, compact orthokeratosis, hypergranulosis, tortuous capillaries within the dermal papillae, and vertical tiers of parakeratotic cells with red blood cells entrapped above the tips of the digitations. Elongated rete ridges may point radially toward the center of the lesion. In the granular layer, cells infected with HPV have coarse keratohyalin granules and vacuoles surrounding wrinkled-appearing nuclei. Koilocytic cells are pathognomonic.

Butcher's warts have acanthosis, hyperkeratosis, and papillomatosis. Small vacuolized cells are seen, and centrally located shrunken nuclei may be identified in clusters within the granular layer rete ridges.

Filiform warts appear similar to common warts, but they may have prominent papillomatosis.

Focal epithelial hyperplasia is characterized by acanthosis, blunting, hyperplastic mucosa with thin parakeratotic stratum corneum, anastomosis of rete ridges, and whiteness of epidermal cells due to intracellular edema. Some may have prominent keratohyalin granules, and vacuolated cells may be present.

Deep palmoplantar warts are similar to common warts except the lesion lies deep to the plane of the skin surface. The endophytic epidermal growth has the distinctive feature of polygonal, refractile-appearing, eosinophilic, cytoplasmic inclusions made up of keratin filaments, forming ringlike structures. Basophilic parakeratotic cells loaded with virions and basophilic nuclear inclusions and may be in the upper layers of the epidermis.

Flat warts are similar to common warts in light microscopy. Cells with prominent perinuclear vacuolization around pyknotic, basophilic, centrally located nuclei can be in the granular layer. These are referred to as "owl's eye cells."

The majority of warts do not cause symptoms. However, they do cause cosmetic disfigurement and, in a rare patient, may cause localized pain. Plantar warts can be painful because of compression and extensive friction that can lead to bleeding. If the plantar wart is large, it can even impair a patient's ambulation and ability to wear shoes.

On physical exam, the common wart may appear as a papular growth with an irregular contour and surface. They may range in size from 1 mm to several centimeters. The majority of common warts are seen on the lower and upper extremities.

Common warts around the lips and eyelids may be thin and long. Those on the plantar surface may be mistaken for a callous. They tend to be deep and painful when palpated.

Flat warts appear as fleshy growths ranging in size from 1-7 mm and may number hundreds in number.

Butcher's warts are seen in individuals who handle raw meat products. These warts tend to have a cauliflower-like appearance and tend to be large.

Focal epithelial hyperplasia includes warts that occur in the oral cavity. These small lesions appear as whitish papules, measuring 1-5 mm in size and arranged in groups.

Cystic warts tend to appear on weight-bearing surfaces like the sole and have a smooth appearance.

The diagnosis of a wart is usually made on a clinical examination and physical findings.

Immunohistochemical detection of HPV structural proteins confirms the presence of a virus, but this has poor sensitivity. Viral DNA identification using Southern blot hybridization is more sensitive and specific for HPV type. Polymerase chain reaction amplifies viral DNA for testing. Although HPV can be detected in younger lesions, it is not always present in older lesions.

A biopsy is obtained if doubt exists regarding the diagnosis. The paring of a wart often reveals tiny black dots that represent thrombosed capillaries.

Once the diagnosis is made, the treatment depends on symptoms, patient preferences, and cost. Even though there are many treatments for warts, none is very effective, and recurrences are common with each of them. In general, one should try the least expensive and least painful treatment first.

The more expensive and invasive treatments are usually reserved for multiple recurrent warts. Observation is also a part of the treatment and should always be considered. It is known that nearly two-thirds of warts spontaneously disappear within 24 months. The only negative observation is that there is a small risk that the wart can enlarge and may even spread to other areas. In most cases, topical agents are utilized first. Salicylic acid is often a first-line agent for the common wart. It requires no prescription and can be used by the patient at home. It has cure rates of 50% to 70%. Cryotherapy, retinoic acid, podophyllin, topical 5-fluorouracil, interferon, and imiquimod are also used for treatment.

Cidofovir has been used to treat CMV infections in HIV patients and case reports suggest it may be beneficial in patients with recalcitrant warts.

The vitamin A derivative, tretinoin, has been used with partial success to treat flat warts.

Intralesional injections with immunotherapy (candida), bleomycin, and interferon alfa have also been reported to work in some patients.

Systemic treatments that have been tried include cidofovir, cimetidine, and retinoids.

Nonpharmacological therapies that are also used include adhesiotherapy, hypnosis, hyperthermia, propolis, and a number of plant extracts. Without controlled trials and the fact that warts do resolve spontaneously, it is difficult to say if these treatments actually work.

Close to two-thirds of warts resolve spontaneously over several years, so the efficacy of treatments is difficult to discern. Warts usually do not cause residual scarring when they disappear on their own. However, almost every type of topical treatment available has the potential to cause moderate to severe scarring. More important, treatment failures are common leading to pain and severe deficits in cosmesis. Malignant change is rare with common warts but rarely one may encounter transformation to verrucous carcinoma, which is most common on the plantar surface.

Irrespective of the treatment selected, failures and recurrence are common. Most warts resolve spontaneously.

To obtain the best outcomes, the management of warts should be under an interprofessional team. Patients with warts may present to the primary provider, dermatologist, urgent care clinic, or the nurse practitioner. The key to the management of warts is patient education. Once a diagnosis of warts is made, the patient should be educated on preventing trauma and transmission. The patient should be told to avoid nail-biting, wear proper shoe wear at the swimming pool, and wear gloves when working with meat products. Patients should be told that warts can disappear spontaneously, and the decision to seek treatment should not be undertaken lightly. The pharmacists should educate the patient about the topical treatments, their efficiency, and adverse effects. Finally, the patient should understand that no treatment works immediately, and many sessions are required- which not only adds to the cost but also increases the risk of adverse reactions. Individuals at risk for warts like butchers and animal workers should wear gloves and appropriate garments. Patients should be told that is the wart does not cause symptoms, it may be left alone. Only through open communication between the clinicians can the morbidity of warts be reduced. (Level V)

When looking at outcomes, it is important to be aware that nearly two-thirds of warts resolve spontaneously over 12-24 months, and there is almost no scarring or any residual defect. However, when warts are medically or surgically treated, inevitably, there is scarring, pain, cost, and adverse effects. More important, every single treatment for warts is associated with failures. Warts are generally asymptomatic but can be painful in some people, depending on their location. Malignant change has been reported in warts, but this is a rare occurrence (Level V). 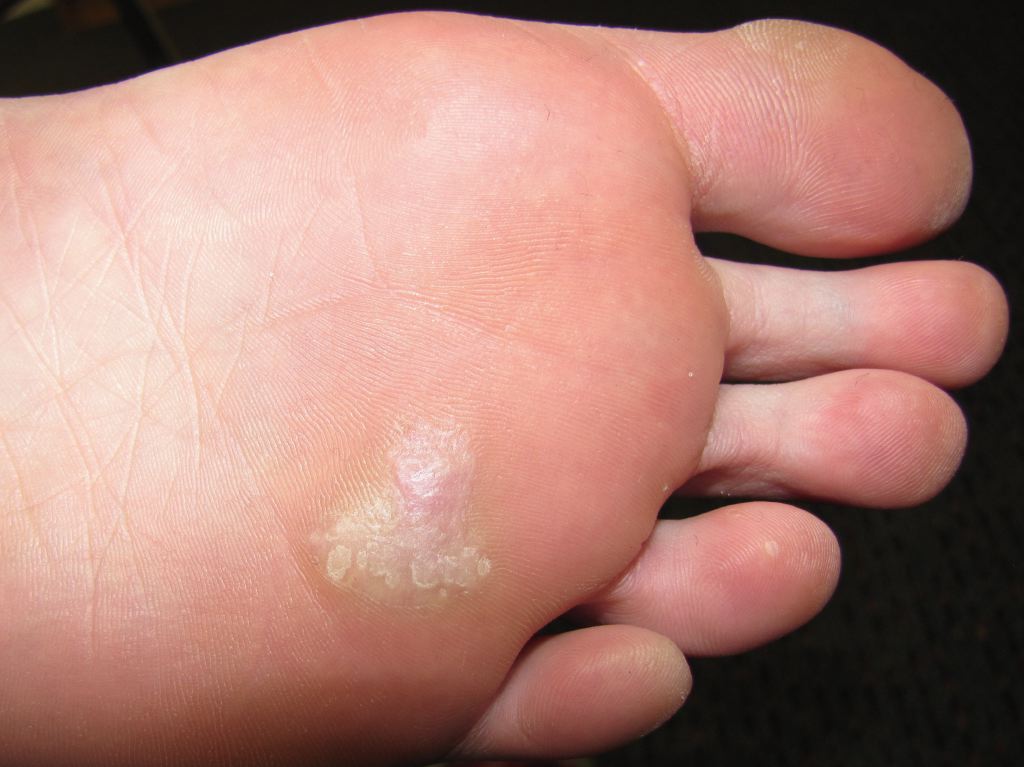