Electronic fetal monitoring is widely utilized intrapartum to assess fetal status, to prevent adverse neonatal outcomes such as fetal asphyxia or cerebral palsy. This activity reviews the physiology, consequences, and management of variable decelerations. Electronic fetal monitoring is used during labor in an attempt to ensure fetal well-being. Interpreting fetal heart rate tracings is complicated, and variable decelerations are just one aspect of that interpretation.

In 2008, terminology and nomenclature for electronic fetal monitoring were standardized at a workshop sponsored by the American College of Obstetricians and Gynecologists, the Society for Maternal-Fetal Medicine, and the Eunice Kennedy Shriver National Institute of Child Health and Human Development.[3] This workshop defined variable decelerations as abrupt, visually apparent decreases in the fetal heart rate. The onset of the deceleration to the nadir should be less than 30 seconds. The decrease from the fetal heart rate baseline should be at least 15 beats per minute and should last for at least 15 seconds, but less than 2 minutes. Variable decelerations can be periodic, meaning they are associated with contractions, or they can be episodic and not associated with uterine contractions.[3]

Variable decelerations can be seen resulting from fetal movement if the fetus is premature.[4] In the term fetus, variable decelerations result from vagus nerve-mediated parasympathetic effects on the heart. There are several theories regarding the pathway that leads to this vagal stimulation.

In general, the fetus is well-adapted to life inside the uterus. The structure of fetal hemoglobin differs from adult hemoglobin. The fetus has a more sensitive Bohr effect which allows a high amount of oxygen to bind and unbind in response to oxygen tension in the fetal circulation.[5] The fetus also has high basal blood flow to its organs and vascular shunts that preferentially delivers oxygenated blood to the heart and brain.[5] Because of all of these adaptations, the fetus has a surplus of oxygen, which, in turn, allows the fetus to maintain oxidative metabolism even during mild or moderate reductions in the supply of oxygen, such as during uterine contractions.[5]

Traditionally, variable decelerations are attributable to transient compression of the umbilical cord. During a contraction, the umbilical vein alone may initially undergo compression, leading to decreased fetal blood return and subsequent baroreceptor-mediated acceleration. This activity gives the appearance of a “shoulder” on the tracing.[6] Complete umbilical cord occlusion then leads to an increase in fetal arterial blood pressure, and the resultant baroreceptor-triggered activation of the vagus nerve leads to rapid fetal heart rate deceleration. When this sequence reverses with the resolution of the contraction, the variable deceleration also resolves.[7]

Alternatively, variable decelerations may result from chemoreceptor responses to hypoxia. The physiology of the uterus and placenta are such that, when the uterus contracts, uteroplacental perfusion is impaired. If the resulting hypoxemia is mild, the fetus may switch to quiet sleep or decrease movements and breathing to reduce oxygen consumption. However, at a certain threshold of hypoxemia, the peripheral chemoreflex is triggered.[5] This reflex leads to the rapid increase in sympathetic and parasympathetic activity, which in turn promotes the centralization of perfusion to critical organs, hypertension, and peripheral vasoconstriction.[5] Because the increased parasympathetic activity overrides the sympathetic activity in the heart, rapid deceleration is triggered.[5]

Physical exam intrapartum should include an examination of the cervix for dilation, station, and presence of a prolapsed umbilical cord. Palpation of the abdomen, especially if the contraction monitor is insufficient, may identify the presence of uterine tachysystole. Antepartum, the initial exam of the pregnant patient, must include identification of the number of fetuses. If there are multiple fetuses, identification of chorionicity and amnionicity is essential.

Recurrent variable decelerations during labor require evaluation. Initial evaluation includes characterization of the decelerations themselves, including their frequency, depth, and duration.[8] It is also important to assess the uterine contraction pattern and the other fetal heart tracing characteristics. A cervical exam to identify dilation and fetal station, and to evaluate for a prolapsed umbilical cord, can be useful both for identifying possible etiologies of concerning fetal heart rate tracings and informing management. In the antepartum setting, variable decelerations may be an indication for further evaluation as well. Assessment of the amniotic fluid volume may be recommended, along with continued monitoring.

Initial management of recurrent variable decelerations should have a target of relieving potential cord compression.[8] Maternal repositioning is a reasonable first maneuver. Amnioinfusion, which reintroduces fluid into the uterine cavity, has also been shown to decrease decelerations and reduce the rate of cesarean delivery.[8] The 2012 Cochrane Review for amnioinfusion for umbilical cord compression showed not only an improvement in cesarean section and decelerations, but also in five-minute Apgar scores, postpartum endometritis, maternal hospital stay, and mean umbilical artery pH.[11]

In specific clinical scenarios that may result in concerning variable decelerations, management should be directed by the etiology of those decelerations. For example:

Ultimately, if the fetal heart tracing is persistently abnormal, facilitating delivery is indicated. In the term, laboring patient, an operative vaginal delivery may be considered. If the patient is remote from delivery, it may indicate the need for cesarean delivery. In a patient with preterm pre-labor rupture of membranes, induction or augmentation of labor may be the next step if the fetus is in the vertex presentation. Alternatively, cesarean delivery may be indicated if the fetus is in the breech presentation.

The possibility exists that other fetal heart rate decelerations may be confused for variable decelerations. While the definitions for each type of deceleration are clear, there is poor intraobserver and interobserver reproducibility in fetal heart tracing interpretation.[2] As the management of various decelerations is different, it is crucial to be able to distinguish them.

Intermittent variable decelerations are usually benign and do not result in poor perinatal outcomes.

Recurrent variable decelerations correlate with poor outcomes, including neonatal acidemia.[12] The peripheral chemoreflex response to hypoxemia is a tailored response, so an increasing severity of hypoxemia leads to deeper decelerations.[5] Hypoxemia and fetal acidosis have correlations with:

Electronic fetal monitoring, including identification of variable decelerations, has the ultimate goal of preventing adverse perinatal outcomes such as those listed above (hypoxic-ischemic encephalopathy, cerebral palsy, death). The efficacy of continuous electronic fetal monitoring, however, is debated. It has been shown to increase the rates of cesarean delivery and operative vaginal delivery and decrease neonatal seizures, but it has not been shown to reduce perinatal mortality or the risk of cerebral palsy.[1]

Also, the intraobserver and interobserver variability of fetal heart rate tracing interpretation is high. In one study, obstetricians reviewed cardiotocographs and agreed only 22% of the time, and then two months later, they reviewed the same tracings and interpreted them differently in 21% of the cases.[13] The positive predictive value and false positive rate of electronic fetal monitoring are also poor. Nonreassuring fetal heart rate patterns predict cerebral palsy only 0.14% of the time, and they have a false positive rate of greater than 99%.[1]

Identification of low fluid in the antepartum setting may allow adequate patient counseling regarding expectations during labor, as well as identify patients early who may be candidates for interventions such as amnioinfusion. Patients require education regarding the purpose of electronic fetal monitoring, their options for continuous or intermittent monitoring, and the potential consequences of monitoring such as cesarean section. Additionally, the potential benefits of fetal monitoring require a review as well.

Intrapartum fetal heart rate tracings divide into three categories. Each category is associated with a different level of reassurance or concern regarding fetal status. The management of each category is also delineated.[8]

Category I: Normal. No action required.

Physicians and nurses work together to review the fetal heart tracing when employing electronic fetal monitoring during labor. In a patient without complications, they should review the tracing every 30 minutes during the first stage of labor and then every 15 minutes in the second stage. For patients with complications, it is recommended to review the fetal heart tracing every 15 minutes for the first stage and every 5 minutes during the second stage of labor. Providers should periodically document review of the tracing.[1] [Level V]

One study looked at the implementation of a fetal monitor safety nurse. They found that the nurses in the safety role felt more comfortable notifying peers about fetal heart rate concerns and that they perceived an overall safety benefit to having a designated nurse who was free of patient care to assess fetal heart tracings continuously. However, the nurses felt that staffing measures were lacking to support the role, especially during times of high acuity and high census.[14] [Level III]

Despite the ambiguity surrounding fetal monitoring, physicians and nursing (and ideally, neonatal specialty nurses) must work collaboratively, particularly in cases with variable decelerations, so that both mother and baby can receive the best care and the therapeutic direction taken is the best possible choice. [Level V] 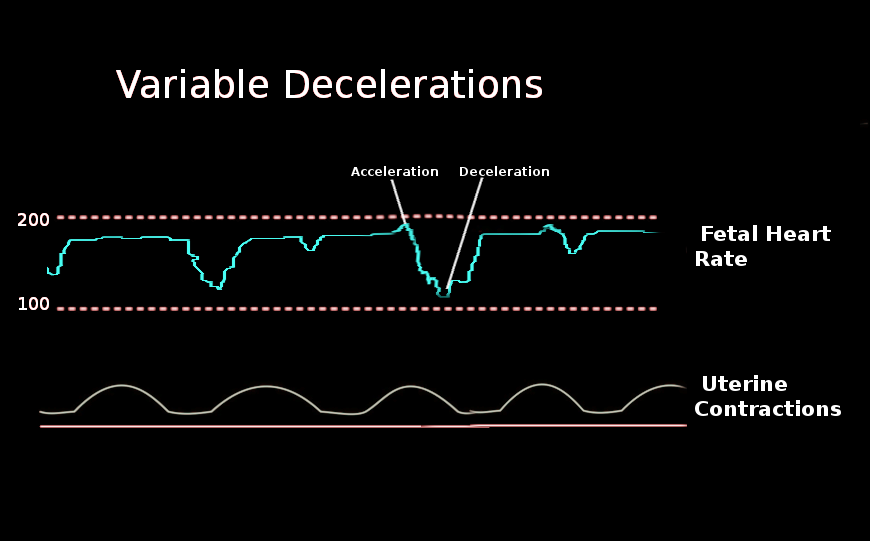