The trigeminal nerve (cranial nerve V; CN V) is a mixed sensory and motor nerve. It supplies the face via three branches of the nerve: from rostral to caudal, the sensory ophthalmic nerve (V1), the sensory maxillary nerve (V2), and the mixed sensory and motor mandibular nerve (V3). The sensory nerves and motor nerves have similar though opposite pathways. Whereas the sensory, or afferent, neurons bring information to the brainstem, the motor, or efferent, neurons project information from the brainstem to the muscles—additionally, the motor fibers course, specifically with the mandibular nerve. The trigeminal nerve is responsible for the transmission of general somatic afferents from the face i.e., pain, temperature, vibration, fine and crude touch and proprioception, as well as transmitting motor information to the muscles of mastication including temporalis, the pterygoids, masseter and some smaller muscles— tensor veli palatini, tensor palatini, anterior belly of the digastric and mylohyoid.[1][2][3]

In general, incoming sensory information from the face travels first to the trigeminal ganglion and then to the trigeminal nuclei, whereas motor information is transmitted directly to the face from the motor nucleus. Except for the fibers projecting to the mesencephalic nucleus, the sensory fibers from V1, V2, and V3 travel along axons from pseudounipolar neurons to their cell bodies in the trigeminal ganglion. The afferent fibers of that neuron then enter the brainstem at the mid-pons and travel to either the chief/principal sensory nucleus or descend via the spinal trigeminal tract to synapse in the spinal trigeminal nucleus. The spinal trigeminal tract is lateral to the nucleus, and the axon will synapse with the second-order neuron in the nucleus once it reaches the appropriate level. In contrast, the mesencephalic nucleus contains cell bodies of neurons associated with processing input related to proprioception involved with the opposition of the teeth.

The upper motor neurons commanding lower motor neurons in the motor trigeminal nucleus originate in the motor cortex. They are transmitted bilaterally to the trigeminal motor nuclei in the pons (lateral to the mesencephalic nucleus). They then travel through the middle cerebellar peduncle (directly adjacent to incoming sensory fibers) to emerge from the middle pons to travel in the mandibular division of the CN V.[2][4]

This tract and nucleus are in the caudal midbrain and rostral pons near the periaqueductal gray. While not yet fully understood, the belief is that it is a representation of the primary sensory ganglion— much like dorsal root ganglion— that became incorporated into the brainstem during embryonic development. It is responsible for unconscious proprioception that stems from muscle spindles in the muscles of mastication and other muscles of the head and neck.[3] It is thus essential in the process of receiving sensory information about tooth pain, helps prevent excessive biting that may break a tooth, receives information about stretch sensation from the muscles of mastication, and serves as the afferent limb of the jaw jerk reflex.[5][6] In this reflex, there is an interplay between the mesencephalic nucleus and motor V nucleus. This nucleus is unique in that the fibers do not have a cell body in the trigeminal ganglion. Instead, pseudounipolar afferent fibers from stretch receptors relay information directly to the cell body in the nucleus, which is then relayed bilaterally to the trigeminal motor nuclei, which project to cause contraction of the masseter.[7]

It is responsible for pain, temperature, and crude touch. Unique to this nucleus is that it receives sensory information from cranial nerves VII, IX, and X (ear, tongue, pharynx, and larynx).[3]

This nucleus is in the dorsolateral pontine tegmentum at the mid-pons, medial to the trigeminal nerve fibers, and the chief sensory nucleus and lateral to the mesencephalic nucleus. Its fibers are only found in the mandibular division of the trigeminal nerve and receive input from the cortex bilaterally.[6][10][3]

Tracts of the Trigeminal System

This tract conveys information from both the spinal trigeminal nucleus and the chief sensory nucleus. General somatic afferents are picked up by Merkel tactile disks and free nerve endings and travel to one of these nuclei where they synapse with second-order neurons. As stated above, the second-order neuronal fibers then form this tract. When the fibers originate in the spinal trigeminal nucleus, they first decussate and then form the VTTT. This specific tract conveys fast pain and temperature from one side of the face to the contralateral ventral posteromedial nucleus of the thalamus (VPM) and eventually to the primary sensory cortex. In contrast, fibers that synapse in the chief sensory nucleus (i.e., 2-point discrimination, conscious proprioception, vibration, and fine touch) can decussate and form the VTTT to the contralateral ventral posteromedial nucleus of the thalamus, or they can ascend as the DTTT.[3]

This nucleus contains third-order neuronal cell bodies and sends that information somatotopically via third-order neuronal fibers to the postcentral gyrus (Brodmann areas 3, 1, and 2) of the primary sensory cortex. Additionally, the VPM conveys slow, dull pain to the contralateral reticular formation, which is then sent to the intralaminar thalamic nuclei and finally to the widespread cortex. Since the fibers course all over the cortex, pain that is not acute is often diffuse and difficult to pinpoint. Lastly, information related to reflexive head and neck movements transmits to the contralateral tectum (superior colliculus and periductal gray).[8][3]

This tract conveys information only from the ipsilateral chief sensory nucleus (2-point discrimination, conscious proprioception, vibration, and fine touch) to the ipsilateral VPM.[3]

Since the muscles of mastication, as well as several other muscles of the face, are derived from mesenchyme of the first pharyngeal arch, they are therefore innervated by the trigeminal nerve.[11][12]

The motor nucleus of the trigeminal nerve is responsible for innervating the muscles of mastication (temporalis, medial and lateral pterygoids, and the masseter) as well as some smaller muscles (tensor veli palatini, tensor palatini, anterior belly of the digastric and mylohyoid).[3][4] Additionally, it is responsible for the corneal reflex. When the cornea of one eye is touched, or bright light is shined in it, there is reflexive closure of both eyes. This closure occurs due to the ophthalmic nerve (V1) traveling through the trigeminal ganglion and synapsing in the spinal trigeminal nucleus and chief sensory nucleus. The second-order axons travel bilaterally to the facial nerve nucleus (cranial nerve VII). Each facial nerve branch then sends information to their ipsilateral orbicularis oculi to rapidly shut the eye.[13][6]

Lesion or Transection of Ganglion or Nuclei 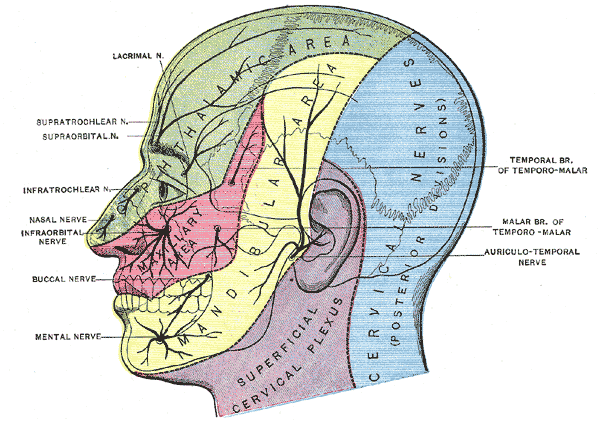