The thyroid gland is a midline structure located in the anterior neck. The thyroid functions as an endocrine gland and is responsible for producing thyroid hormone and calcitonin, thus contributing to the regulation of metabolism, growth, and serum concentrations of electrolytes such as calcium.[1][2]

In addition to considering its role in metabolism, growth, regulation of certain electrolytes, and its involvement in many disease processes, the thyroid gland deserves consideration for its anatomical location and its close relationship to important structures including the parathyroid glands, recurrent laryngeal nerves, and certain vasculature.

The thyroid gland is divided into two lobes that are connected by the isthmus, which crosses the midline of the upper trachea at the second and third tracheal rings. In its anatomic position, the thyroid gland lies posterior to the sternothyroid and sternohyoid muscles, wrapping around the cricoid cartilage and tracheal rings. It is located inferior to the laryngeal thyroid cartilage, typically corresponding to the vertebral levels C5-T1. The thyroid attaches to the trachea via a consolidation of connective tissue, referred to as the lateral suspensory ligament or Berry’s ligament. This ligament connects each of the thyroid lobes to the trachea. The thyroid gland, along with the esophagus, pharynx, and trachea, is found within the visceral compartment of the neck which is bound by pretracheal fascia.

The “normal” thyroid gland has lateral lobes that are symmetrical with a well-marked centrally located isthmus. The thyroid gland typically contains a pyramidal extension on the posterior-most aspect of each lobe, referred to as the tubercle of Zuckerkandl. Despite these general characteristics, the thyroid gland is known to have many morphologic variations. The position of the thyroid gland and its close relationship with various structures brings about several surgical considerations with clinical relevance.

In 10% of the population, there is an additional artery known as the thyroid ima artery. This artery has a variable origin including the brachiocephalic trunk, aortic arch, the right common carotid, the subclavian, the pericardiacophrenic artery, the thyrocervical trunk, transverse scapular, or internal thoracic artery. The thyroid ima most commonly originates from the brachiocephalic trunk and supplies the isthmus and anterior thyroid gland.

Lymphatic drainage of the thyroid gland involves the lower deep cervical, prelaryngeal, pretracheal, and paratracheal nodes. The paratracheal and lower deep cervical nodes, specifically, receive lymphatic drainage from the isthmus and the inferior lateral lobes. The superior portions of the thyroid gland drain into the superior pretracheal and cervical nodes.

The autonomic nervous system primarily innervates the thyroid gland. The vagus nerve provides the main parasympathetic fibers, while sympathetic fibers originate from the inferior, middle, and superior ganglia of the sympathetic trunk. These nerves do not play a role in the control of hormonal production or secretion but mostly influence vasculature. [4]

Several muscles should be considered when discussing neck and thyroid surgical anatomy.

In addition to a pyramidal lobe, a wide variety of morphologic variations exist. The isthmus may be large, narrowed, or entirely absent. The lateral lobes may vary in size and symmetry when comparing right to left.

Due to its close relationship with several structures, the following must be considered during total thyroidectomy,  thyroid lobectomy, or procedures involving the excision of a thyroglossal duct cyst.[6][7][4]

In re-operative cases, it is recommended to perform laryngoscopy regardless of voice symptomology asymptomatic vocal cord paralysis can occur in up to 30% of patients after anterior neck surgery.

The two nerves of importance that pass through the thyroid are the left and right recurrent laryngeal nerves [RLN]. They are often located on the lateral aspect of the thyroid gland near the vicinity of the inferior thyroid artery. When operating on the thyroid gland, it is vital to visualize these nerves and avoid trauma. The nerve can be exposed caudal to the inferior thyroid artery or following mobilization of the superior and inferior poles. The nerve is most likely to be injured in its distal portion [2-3cm].  This distal portion of the RLN is covered by either or both the tubercle of Zuckerkandl [a pyramidal extension on the most posterior aspect of each lobe] and the ligament of Berry. Most often, it is not until the tubercle of Zuckerkandl is medially retracted that the RLN is seen. The RLN most often traverses just medial to the tubercle and is hidden from view. The distal course of the RLN is more easily identified in total lobectomies as opposed to subtotal lobectomies, in which the distal course of the RLN may not always be visualized.

Another surgical consideration is the anatomic variation of the nerves. In approximately 1% of cases, a nonrecurrent laryngeal nerve or direct vagus branch is identified on right side following retraction of the tubercle of Zuckerkandl.

Also, due to variations in which the RLN can bifurcate or trifurcate proximal to its laryngeal entrance, it is imperative to ensure that no nerve branch within the ligament of Berry is cut or clamped.

Lastly, it is important to note that the potential for nerve injury can occur from direct injury to the nerve or indirectly from heat from use of electrocautery in close proximity to the nerves

Rarely, the cervical sympathetic trunk may be injured. This is a consideration when the carotid sheath is mobilized in order to treat retroesophageal extension of a goiter or malignancy.

Altered anatomy and displacement of the trachea can result in the exposure of the anterior esophageal surface, creating the risk of potential injury.

The carotid arteries, which course posterolateral to the thyroid gland, are rarely an issue during thyroidectomy. Excessive lateral traction in an individual with an enlarged thyroid gland may result in ocular or central nervous system damage from reduced blood flow. This is preventable with proper retraction and tissue handling.

By dividing the branches of the inferior thyroid artery beyond the parathyroid gland on the thyroid gland capsule, disruption of the end-artery can best be avoided. However, transplantation to a “dry” pocket in the sternocleidomastoid muscle, a subcutaneous area or forearm can be performed if end-artery damage does occur.

Standard preoperative labs should include a serum calcium assay. It is also important to determine if a patient is normocalcemic post-operatively as well. Hypocalcemic patients should be treated with calcium and vitamin D as appropriate. Careful monitoring of calcium levels should continue in the weeks following discharge.

Approximately 50% of thyroglossal duct cysts are close to or just inferior to the hyoid bone. Due to its relation to the hyoid bone and the rates of recurrence, surgical removal includes the cyst, the middle segment of the hyoid bone, and the tract that leads to the base of the tongue. This procedure is referred to as the Sistrunk Procedure.

Due to the location, hematomas may lead to acute respiratory problems. Insidious hemorrhage may also result in laryngeal edema and infrequently can lead to the need for tracheostomy.

Surgical considerations for wound closure are under consideration of transversely divided muscles. One must consider a closure that would create space for blood to disperse, if bleeding were to occur.

When the strap muscles are separated from midline and retracted laterally, reapproximation in the midline is performed, once again with consideration of space for possible bleeding. Additionally, some reapproximate the platysma muscle and its fascia.

Diseases and anomalies of the thyroid gland and subsequent surgeries can result in various presentations and complications that bear clinical significance.[8]

Disruption to the parathyroid glands may result in transient or permanent hypoparathyroidism and consequential hypocalcemia.

Recurrence of a thyroglossal duct cyst may occur following failure to remove the cyst and its tract in its entirety. This may result in subsequent procedures. 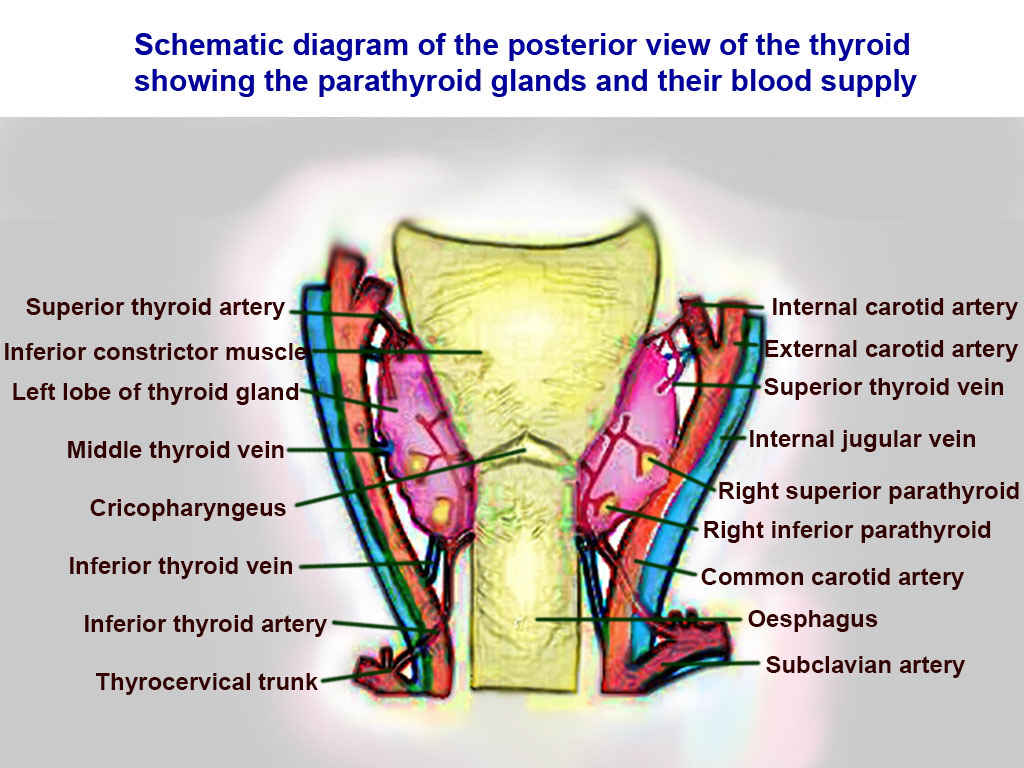 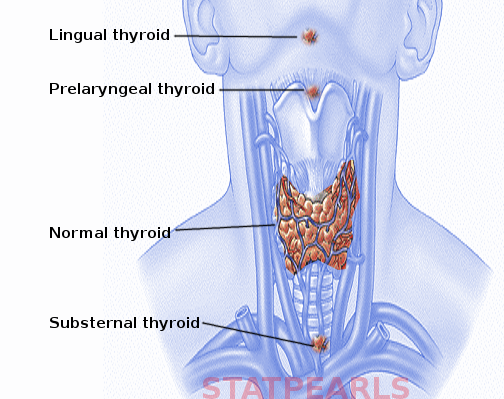