The talus ranks as the second largest tarsal bone with unique anatomic features and serves an important role in mobility of the foot and ankle as it is the osseous link between the leg and the foot. The anatomy of the talus is quite complex with three separate articulations with distinct features including the subtalar joint with its three faces. The talus divides into a head, neck, and body. Not surprisingly the covering of approximately two-thirds of the surface is articular cartilage, and there are few muscle or tendon attachments.[1]

Vascular supply to the talus arises from three arteries: posterior tibial, dorsalis pedis and perforating peroneal arteries. The blood supply is predominately extraosseous because of the extensive articular cartilage coverage and is therefore easily disrupted in the setting of displaced fractures or dislocation leading to avascular necrosis or osteonecrosis.[1][3][4]

Fractures of the head and neck are associated with high energy trauma, as may be seen with motor vehicle collisions or fall from significant height. While MVC or falls can also cause the traumatic injury of the body of the talus, osteochondral injuries and fractures of the lateral process can result from by sports injuries (snowboarding, inversion, or eversion).

In general, talar fractures are uncommon, constituting less than 1% of all fractures in the human body and between 3% and 6% of fractures of the foot.[1] There is likely no age predilection for these fractures, although the association with MVC would suggest increased incidence in younger patients. Also, there is a significant male predilection, with up to 73% of talar fractures occurring in men.[5] While the incidence of these fractures is likely not increasing, these types of injuries (and, in particular, the more severe fracture patterns) are increasingly being seen due to increased survival from serious injuries.[1] Some reports suggest that there may be an increasing incidence in lateral process fractures due to snowboarding.

The talar vascular supply and its lack of muscular attachments predispose it to a significant injury in the setting of trauma. Since a considerable proportion of the surface of the bone has a cartilage covering, the surface area accessible to vascular supply is limited. Additionally, since talar fractures correlate with high-energy injuries, associated musculoskeletal and vascular injuries may be associated. Not surprisingly, displaced fractures and dislocations have a higher incidence of subsequent osteonecrosis. Due to these considerations, talar fractures may be associated with significant morbidity and long-term disability if not appropriately managed.

History invariably involves trauma to the ankle. Physical examination typically reveals swelling and hematoma involving the ankle. The dynamic examination may reveal a limited range of motion at the tibiotalar, subtalar, and midtarsal joints. Patients may be unable to bear weight.

Talar head fractures lead to dorsal midfoot pain, swelling and focal tenderness over the talar head, and pain with motion at the midtarsal joint.[7] Because lateral process fractures are often radiographically occult on initial presentation, the clinical evaluation may find persistent lateral ankle pain following forced dorsiflexion and inversion injuries to the foot.[9] Patients diagnosed with lateral ankle pain not responding to conservative measures should be evaluated for lateral process fracture. The nutcracker sign has been described for fractures of the posterior process, with a positive sign consisting of pain and crepitation with forced plantar flexion of the ankle. Tenderness over the Achilles tendon insertion and posterior to the talus may also be seen with these fractures. Pain with movement of the hallux may be elicited due to the motion of the flexor hallucis longus tendon in the adjacent groove.[10] Fractures of other portions of the talus do not have specific localizing signs.

No laboratory examination is involved in the diagnosis of these fractures. The initial radiographic evaluation includes anteroposterior (AP), mortise, and lateral views of the ankle and AP, oblique, and lateral views of the foot. A Canale radiographic view may also be obtained to evaluate for talar neck fractures, which are often oblique to the sagittal plane of the foot. This specialized view is used less commonly with the wide availability of CT but may be used intraoperatively. The Harris radiographic view, an additional nonstandard image, of the calcaneus permits better visualization of the posterior and middle portions of the subtalar joint. Multiplanar computed tomography (CT) serves several roles: to aid surgical planning, to further evaluate for a clinically suspected radiographically-occult talar fracture, to evaluate displacement, and to detect additional fractures.[5][11][12][13]

Talar fractures are divided based on the involvement of the head, neck, or body, with further subdivisions of patterns in the body. Different classification schemes for these sections are used to describe fracture patterns and guide management.

Talar head fractures occur at the articular surface of the talonavicular joint and may have associated subluxation or dislocation of the talus and fractures of adjacent bones. No classification scheme exists to describe this fracture, though the two patterns described for the head are crush injury to the articular surface with significant comminution and shear fractures. Talar head fractures are best visualized on foot radiographs.

The commonly accepted posterior margin of the talar neck is delineated by the lateral talar process and the talar dome cartilage. A fracture occurring anterior or inferior to these structures is considered a talar neck fracture. Conversely, a fracture posterior or superior to these structures is considered to involve the talar body.[14] The proposed mechanism of talar neck injuries results from forced dorsiflexion of the talus against the anterior tibia. Subtalar ligamentous injury commonly precedes the fracture. There may be associated subtalar, tibiotalar, or talonavicular joint subluxation or dislocation. Talar neck fractures may be isolated, though the majority do extend to either the body or head. However, an articular extension to the subtalar, talonavicular, or tibiotalar joints is not typical. The modified Hawkins-Canale classification is used to describe these fractures and has its basis in associated joint malalignment.

The modified Hawkins-Canale Type I fractures are nondisplaced and may involve disruption of the vascular supply which enters the dorsolateral neck and travels to the body, but with preservation of the remaining sources of talar neck vascular. Nondisplaced fractures can be challenging to detect on standard radiographs. Type I injuries have the best prognosis and lowest risk of osteonecrosis. Type II fractures have displacement with associated subluxation or dislocation of the subtalar joint, medial more often than lateral. The tibiotalar and talonavicular joints remain in proper alignment. Open fractures may be seen with complete dislocation. With Type II fractures, at least two sources of arterial supply are disrupted, including supply to the dorsolateral neck and inferiorly to the roof of the sinus tarsi and tarsal canal (artery of the tarsal canal). The third vascular source which also supplies the medial talar body may also be injured (deltoid and calcaneal branches), though this is less likely than with Type III and IV fractures. Type III fractures have displacement with subluxation or dislocation of the subtalar and tibiotalar joints. The talonavicular joint remains in normal alignment. This pattern of malalignment may further injure the posterior tibial neurovascular bundle.

Additionally, all three major arterial sources to the talus are commonly injured resulting in a high risk of osteonecrosis. Type IV fractures demonstrate dislocation or subluxation of the subtalar, tibiotalar, and talonavicular joints. In addition to the vascular disruption seen in Type III injuries, disruption of blood supply to the head and neck fragments may be seen with this injury.

Talar body fractures include fractures of the talar dome, lateral and posterior processes, and the body proper. The anatomic boundary separating the talar neck and the head is described above. The Sneppen classification is used to describe these fractures.

Fractures of the talar dome (Sneppen A) are typically due to an impaction injury and may injure the articular cartilage or subchondral bone. Injuries to these structures, similar to other joints in the appendicular skeleton, have been termed osteochondral defects, a lesion with its particular classification system describing the stability of the fracture fragment which will not be discussed in this article. Compression fractures of the talar dome are often radiographically occult, with one estimate of false-negative radiographs reported at 31%.[5] Osteochondral defects of the lateral dome are often shallow and occur after dorsiflexion and inversion injuries. Osteochondral defects of the medial dome are deeper and likely occur secondary to plantar flexion and inversion.

Fractures of the talar body proper may involve the tibiotalar joint, talocalcaneal joint, or both. Coronal (Sneppen B) and sagittal (Sneppen C) shear fractures of the body result from axial loading of a dorsiflexed foot. Comminuted crush injuries (Sneppen F) are due to high-energy impact and are frequently open fractures.

Lateral process fractures (Sneppen E) are often radiographically occult initially and occur with axial loading, forced dorsiflexion, and external rotation or eversion of the foot.[9] This fracture has been termed “snowboarder’s fracture” due to its high association with participants in this activity.[15] As with other talar fractures, there is also an association with motor vehicle collisions and falls. Lateral process fractures are also further classified using the Hawkins criteria: Type I (simple), Type II (comminuted), and Type III (chip or avulsion).

Nonoperative management of nondisplaced talar head fractures and appropriate surgical management of displaced talar head fractures correlate with excellent outcomes. The relatively good prognosis of the talar head as compared to the neck and body is at least partially attributable to its good vascular supply. Regarding talar neck fractures, there is a strong positive correlation between the modified Hawkins-Canale fracture type and the risk of avascular necrosis.[19][20] Additionally, studies have shown that the degree of fracture displacement, degree of comminution, extent of soft-tissue injury, and success of surgical reduction correlate with the development of osteonecrosis and other outcomes such as post-traumatic osteoarthrosis with rates of osteonecrosis in Type I, II, III, and IV fractures reported at 0 to 15%, 20 to 50%, 100%, and 100%, respectively.[21][22] The Hawkins sign is a radiographic finding of a thin linear subcortical radiolucency appreciated on post-treatment images which indicate preserved blood flow to the talar body in the setting of talar neck fractures. Talar dome osteochondral defects which are stable and nondisplaced often heal well, while displaced unstable fragments may undergo osteonecrosis if not surgically repaired.[23][24] Crush comminuted talar body fractures have the worst prognosis of all talar body fractures.

Failure to reduce a displaced head or neck fracture can lead to secondary osteoarthrosis or necrosis.[8] As stated above, even with appropriate surgical management, Type III and IV talar neck fractures are associated with up to 100% risk of osteonecrosis. Osteonecrosis and secondary osteoarthrosis are common complications of talar body fractures. Associated fractures of the head or neck increase the likelihood of complications in body fractures. Crush comminuted talar body fractures have a high incidence of a bone loss and nonanatomic reduction, with consequent high rates of avascular necrosis.

Clinical and/or radiologic detection of a fracture of any portion of the talus warrants consultation with an orthopedic surgeon for optimal management. An orthopedic specialist should guide nonoperative, emergent primary surgical, and definitive surgical management of these fractures. In the event of persistent clinical suspicion for radiographically-occult talar fracture, CT is recommended, and consultation with a radiologist may be helpful for optimal study acquisition. Following the initial diagnosis and management, the patient’s care should requires supervision by an interprofessional team consisting of the primary care provider, nurse practitioner, an orthopedic surgeon, and a radiologist. 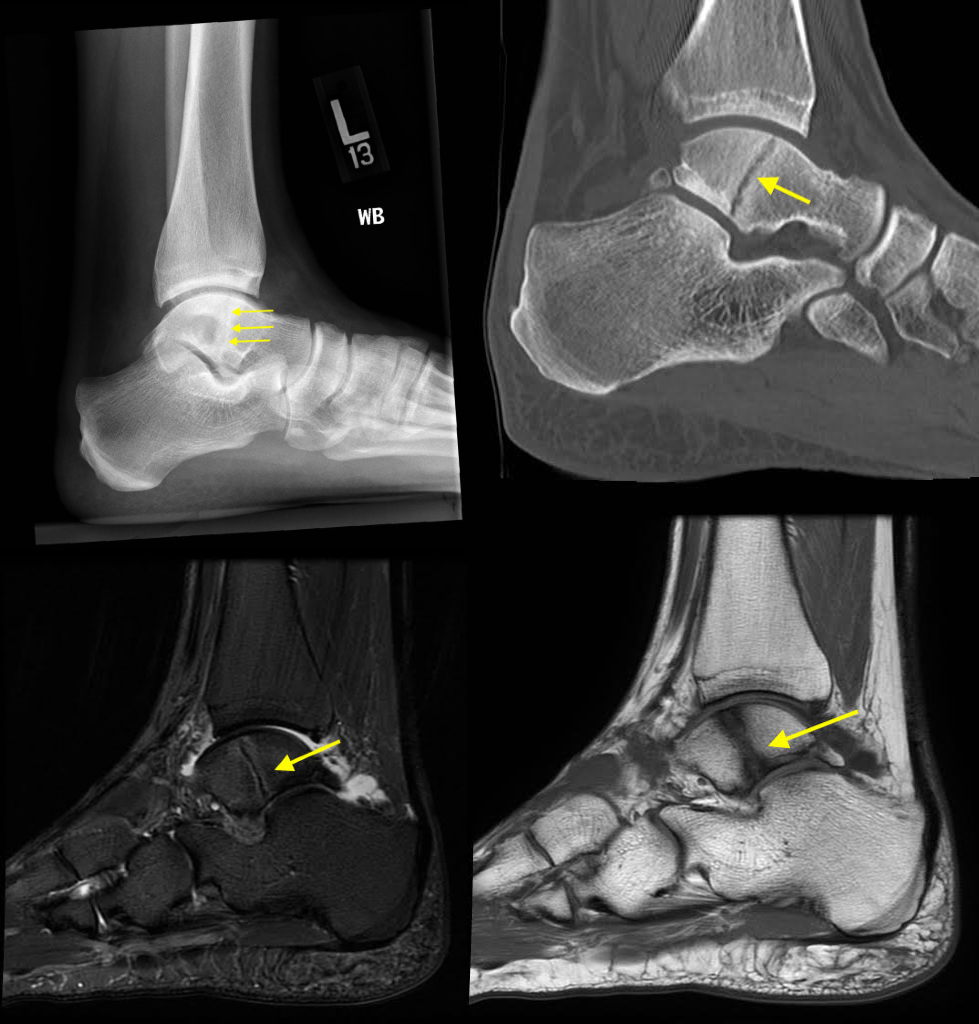