Sinus tachycardia is a regular cardiac rhythm in which the heart beats faster than normal. While it is common to have tachycardia as a physiological response to exercise or stress, it causes concern when it occurs at rest. This activity reviews the evaluation and management of sinus tachycardia and highlights the role of the interprofessional healthcare team in evaluating and treating patients with this condition.

Sinus tachycardia is a regular cardiac rhythm in which the heart beats faster than normal and results in an increase in cardiac output. While it is common to have sinus tachycardia as a compensatory response to exercise or stress, it becomes concerning when it occurs at rest.[1] The normal resting heart rate for adults is between 60 and 100, which varies based on the level of fitness or the presence of medical comorbidities.[2][3] For children, it varies by age but is commonly higher than the resting rate in adults (starting approximately between 100 and 150 beats per minute in infancy with a gradual reduction over the next six years).[4]

The presence of tachycardia at rest could be the earliest sign of serious pathology. Thus, it is crucial for the clinician to rapidly identify the underlying cause of tachycardia and determine if it indicates urgent evaluation and/or treatment.[2] This activity will review the etiologies of tachycardia and approach to the patient who presents with tachycardia.

Tachycardia can have physiological or pathological causes. Physiologically it is commonly associated with catecholaminergic triggers, including exercise, stress, pain, and anxiety.[2] Pathologically, there are cardiac and non-cardiac etiologies as summarized below:

*Ventricular tachycardia is is an arrhythmia that originates in the ventricles as demonstrated by a wide QRS on an electrocardiogram. It can be nonsustained (lasting less than 30 seconds or sustained (lasting greater than 30 seconds or with associated hemodynamic instability). Additionally, if the QRS morphology is stable, it is classified as monomorphic, and if the PRS morphology is variable, it classifies as polymorphic.[6]

*Myocarditis is an inflammatory process involving cardiac myocytes that is generally secondary to a viral infection. Other sources of myocarditis include bacterial and parasitic infection, ingestion of medication or recreational substance, hypersensitivity reactions to medications or venoms, autoimmune disease, sarcoidosis, hypothermia, ischemia, radiation, and rejection of a transplanted heart.[9]

*Pulmonary Emboli are disorders of the pulmonary vasculature. They can be acute, chronic, or both.[12][13] Acute pulmonary emboli are generally more clinically significant and have higher rates of morbidity and mortality.  Acute pulmonary emboli most often are a piece of a deep vein thrombus that has traveled through the circulation to the pulmonary vasculature, but fat emboli from an orthopedic injury, amniotic fluid emboli during pregnancy, and air emboli from instrumentation of central vasculature are all potential etiologies.[14][15][16][15][14]

*Hypoxia is a clinical state where tissues do not receive the necessary amount of oxygen to support their metabolic demand.  Hypoxia can result from the inability to take in oxygen, transport the oxygen, or perform oxygen gas exchange.[17]

*Hypoglycemia is the state when plasma glucose concentration falls below 70 mg/dL. It most commonly presents as a side effect of the medical therapies, i.e., drug-induced. It can also result from critical illness, alcohol consumption, hormonal imbalance, bariatric surgery, inborn errors of metabolism, insulinomas, and some pituitary and adrenal adenomas.[18]

*Dehydration results from an imbalance of the total body fluid intake and output. To maintain cardiac output in the setting of intravascular depletion, heart rate will increase.[19]

Hypomagnesemia is a serum magnesium level below 1.6 mg/dL. Hypomagnesemia can result from the low intake or poor absorption of magnesium, and increased filtration or excretion of magnesium. These can all be either congenital or acquired conditions. Acquired conditions that impact magnesium level include prolonged nasogastric suction, malabsorption, acute pancreatitis, refeeding syndrome, late-term pregnancy, lactation, uncontrolled diabetes mellitus with glucosuria or diabetes mellitus complicated by diabetic nephropathy, post-kidney injury diuresis, proximal tubule injury or medications that act on the proximal tubule, thick ascending loop of Henle, or descending loop of Henle.[21]

*Sepsis is a systemic inflammatory illness secondary to an infection that causes organ dysfunction and is a leading cause of mortality in the United States. It is a spectrum of illness and can present as mild, fulminant, or intermediate disease. In the early stages of sepsis, the large inflammatory burden will decrease systemic vascular resistance. The body compensates for decreased systemic vascular resistance by increasing heart rate, and patients (particularly pediatric patients) can be normotensive to hypertensive through this compensatory period.[23]

*Withdrawal from substances or medications is an additional source of tachycardia. The following is a list of common medications that will result in tachycardia when discontinued:

Hyperthyroidism is a condition secondary to excess thyroid hormone. It commonly presents with multisystem pathology, including palpitations, tachycardia, anxiety, tremor, diaphoresis, edema, hyperreflexia, weight loss, and changes to the skin and nails. Hyperthyroidism can also result in cardiac arrhythmias such as atrial fibrillation.[28]

Pheochromocytomas and paragangliomas are neuroendocrine tumors of the adrenal gland and extra-adrenal autonomic tissue, respectively. They present with tachycardia, diaphoresis, diarrhea, hypertension, weight loss, and anxiety.[29]

Patients with sinus tachycardia are commonly asymptomatic, but the patient may be aware of the increased heartbeat and may complain of heart palpitations.[2] Depending on the underlying etiology, sinus tachycardia may correlate with other symptoms. This symptomatic presentation can include dyspnea, chest pain, lightheadedness, dizziness, syncope, and presyncope.[2] A detailed history is vital to decisions regarding the appropriate management of tachycardia. These include inquiring about precipitating factors (i.e., fever or exercise), recent medications, toxic exposures, drug or caffeine use, a history of illness, a history of heart disease or recent heart surgery, and family history.[35][36][35]

On physical exam, evaluation of the patient’s hemodynamic status is crucial to stabilization of the patient, particularly to ensure that the patient is not on the verge of cardiovascular collapse due to shock.[37] A cardiovascular examination is necessary to confirm the presence of tachycardia, and to evaluate for the presence of distant heart sounds (i.e., seen in pericardial effusions with tamponade), pulsus paradoxus, third or fourth heart sounds or gallop rhythm (i.e., seen in myocardial dysfunction), and murmurs (i.e., seen in structural heart disease).[35][10][38][39]

The identification and treatment of the underlying etiology of sinus tachycardia is the cornerstone of management.[1] Benign causes such as physical activity or stress often do not require any specific cardiac treatment.[1] If sinus tachycardia is due to a medical condition at risk for clinical deterioration (i.e., sepsis, shock, hypoxia, metabolic acidosis, acute myocardial ischemia), the patient should be admitted for urgent evaluation. Treatment should carefully focus on the underlying cause.

Inappropriate sinus tachycardia is a chronic nonparoxysmal resting heart rate of more than 100 beats per minute that is not associated with any physiologic, pharmacologic, or pathologic etiology.[52]  Postural orthostatic tachycardia syndrome is a cardiovascular response to postural changes. This condition occurs when the patient (typically in young females in the absence of structural heart disease) alter their position from recumbent to standing and have an increase in heart rate (30 beats per minute or higher for more than 30 seconds; greater than or equal to 40 beats per minute in patients aged between 12 and 19 years of age) in the absence of orthostatic vital sign changes.[53]

Following identification and confirmation of sinus tachycardia, the clinician must then determine the underlying cause starting by ruling out life-threatening cardiac and non-cardiac etiologies that require immediate evaluation and treatment.

Persistent sinus tachycardia at rest requires an evaluation by a medical professional. Early identification and intervention may result in favorable patient outcomes depending on the underlying etiology.[54][55][54] If sinus tachycardia is confirmed and determined to be transient due to a normal physiologic response to stress or anxiety, it often results in spontaneous resolution.[1]

Patients should understand that while tachycardia can be a normal physiologic response, it can be one of the first signs of serious medical illness. Patient education focused on the underlying etiology of tachycardia (particularly the associated symptoms) is essential to ensure proper management and follow up.

If any concerns regarding the presence of tachycardia with any associated symptoms (including chest pain or dyspnea), the patient should be advised to seek immediate medical attention.

Serious adverse events may result from unrecognized clinical deterioration; thus, an interprofessional team approach is necessary for diagnosis and management.[57] To improve its detection in hospitalized patients, various vital signs serve as part of an early warning system, which includes the heart rate.[58]  The efficient use of these tools requires an integrated inter-professional team-based approach to facilitate communication between nursing and the medical team.[57][59][57] Bedside nurses must ensure timely and accurate entry of vital signs as well as recognition of important patient trends. [Level 1]

Other disciplines may have involvement, depending on the etiology. Pharmacists may be involved to prepare and immediately deliver antimicrobial medications in patients suspected of sepsis.[61] Critical care teams may be involved earlier if the patient appears to be at risk of a hemodynamic compromise requiring close monitoring and emergent intervention.[62] Cardiologists might consult on the case if cardiac failure results from an underlying cause requiring further diagnostic workup and treatment.[63] [Level 2]

Interprofessional teamwork, communication, and collaboration are key to identify the presence of tachycardia and ensure patient safety.  [Level 5] 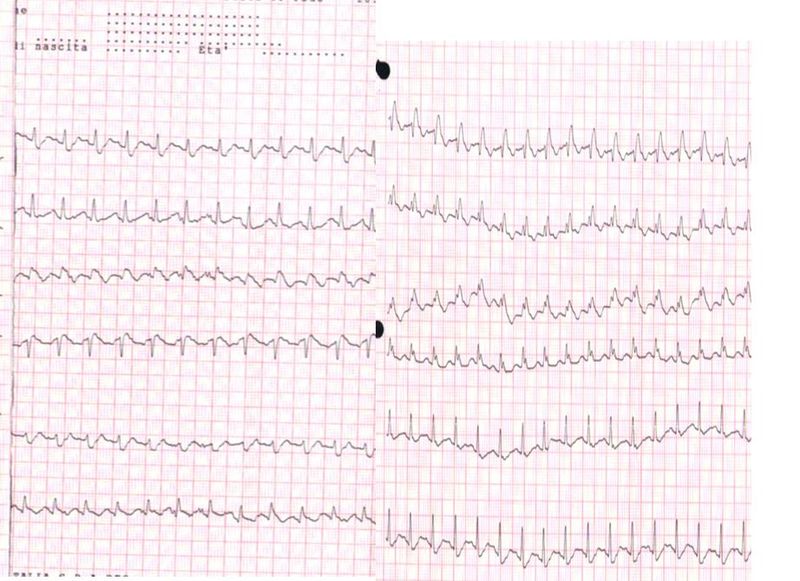 Hoffman RS, Treatment of patients with cocaine-induced arrhythmias: bringing the bench to the bedside. British journal of clinical pharmacology. 2010 May;     [PubMed PMID: 20573080]