In the United States, Loxosceles reclusa or brown recluse spiders are found mostly in the south, west, and midwest areas. They are usually in dark areas such as under rocks, in the bark of dead trees, attics, basements, cupboards, drawers, boxes, bedsheets, or similar locations. Dermonecrotic arachnidism is the local tissue injury that results from brown recluse spider envenomation, while loxoscelism describes the systemic syndrome caused by envenomation. This activity reviews the pathophysiology and presentation of the brown recluse spider biiteand highlights the role of the interprofessional team in its management.

In the United States, Loxosceles reclusa or brown recluse spiders are found mostly in the south, west, and midwest areas. They are usually in dark areas such as under rocks, in the bark of dead trees, attics, basements, cupboards, drawers, boxes, bedsheets, or similar locations. Dermonecrotic arachnidism is the local tissue injury that results from brown recluse spider envenomation, while loxoscelism describes the systemic syndrome caused by envenomation.[1]

In the USA, the venom of the Loxosceles reclusa is the most potent among arachnids and most likely to cause dermonecrotic arachnidism.[2]

Systemic involvement, while rare, is more likely to occur in children than in adults. There has recently been an increase in reports of brown recluse spider bites even in nonendemic areas. Most of these reports are likely because of other causes of similar appearing skin lesions like methicillin-resistant staph aureus skin infections.[3]

Brown recluse spider venom is cytotoxic and hemolytic. It has many enzymes that contribute to the clinical manifestations. Sphingomyelinase D, one of the more well-studied components, has been shown to direct toxin-mediated hemolysis and complement-mediated erythrocyte destruction. It does this by activating the complement system.  Within the venom, there are additional proteases that degrade collagen, fibronectin, fibrinogen, gelatin, elastin basement membranes that on their own may not be able to cause the local reaction seen with brown recluse bites but seem to have a synergistic effect with sphingomyelinase D leading to many of the cutaneous findings. Hyaluronidase, alkaline phosphatase, esterase, and ATPase also seem to have effects leading to the cutaneous manifestations of bites.[4]

To further study the necrotic effects of the brown recluse spider bite, there was a study done with rabbits injected with the venom. Although a small sample size, findings showed inflammatory infiltrates, coagulative necrosis and vasculitis. With all samples, there was a zone of eosinophils referred to as "mummified" coagulative necrosis seen between the epidermal and dermal layers.[5]

Brown recluse spider bites usually occur while indoors and as a defense mechanism as they are crushed or rolled over in bed. Some bites will present with only an urticarial rash. If the bite is more severe, the course usually is as follows.  The initial bite will be painless, but over the subsequent two to eight hours it will become increasingly painful. Systemic symptoms of brown recluse venom can present as malaise, nausea, headache, and myalgias. In children, the systemic reaction is more severe and may also include weakness, fever, joint pain, hemolytic anemia, thrombocytopenia, organ failure, disseminated intravascular coagulation, seizures, and death.

The bite site may initially have two small puncture wounds with surrounding erythema. From there, the center of the bite will become paler as the outer edge becomes red and edematous; this relates to vasospasm which will cause the pain to become more severe. Over the next few days, a blister will form, and the center of the ulcer will turn a blue/violet color with a hard, stellate, sunken center. After this step, skin sloughing can occur, and the wound will eventually heal by secondary intention, but this can take several weeks.

If the clinician makes a working diagnosis of a brown recluse spider bite, lab testing is unnecessary except if there are systemic complaints, especially in children.[6] In these patients the following laboratory studies are performed;

Initial treatment should begin with simple first aid. Elevate the extremity above the heart or at least in a neutral position. The activity of sphingomyelinase D is temperature dependent so an ice pack to the area should help halt the necrosis process.[8] Clean the wound with soap and water and ensure the patient’s tetanus immunization is up to date. NSAIDs can provide pain management, but some people may need opioids. Antibiotics are only necessary if there is associated cellulitis.

There is scant evidence for the use of dapsone or antivenom.[9] Also, note that dapsone is harmful in patients with G6PD deficiency,[10] and can also cause deadly hypersensitivity reactions.[11]  Steroids may be beneficial as they have been shown to decrease hemolysis and help prevent renal failure. If the infection is severe, consider hyperbaric oxygen therapy and surgical excision after the wound is well demarcated may be a consideration.[2] Early surgical debridement is not advisable.

Management for systemic symptoms is different than for local effects; hospital admission is the recommendation for patients with hemolytic anemia, rhabdomyolysis, disseminated intravascular coagulation or end-stage organ failure.  Treatment of these conditions is not different in this scenario than it would be for any other cause.

In children, systemic loxoscelism may preclude skin findings and should be considered as a differential in pediatric patients with undifferentiated acute hemolytic anemia especially in regions known to have the brown recluse spider. Hemolysis has been reported up to 7 days after spider bite so adequate follow up instructions should be given to parents of children even if there are no systemic findings during the ED visit.[12] At a minimum, one should obtain a urinalysis at the initial visit if the working diagnosis is a brown recluse spider bite and the patient is being discharged.

Most cases of Brown recluse Spider envenomation manifest only as local soft tissue destruction. Death is rare but has been reported especially in children.[13][14]

After 4 to 6 weeks of therapy, it may be necessary to proceed with delayed skin grafting.

Identifiable Features: The brown recluse spider may be identifiable by the violin pattern on the cephalothorax which attaches to the legs, although other species may exhibit similar markings.

Habits; Most bites occur in the summer months. The spiders like to hide in warm, dark corners and crevices like attics, garages, shoes, bed corners. The spiders are usually not aggressive and bite as a defense mechanism when they are being pressed against a surface by the skin of the patient.

Venom; The brown recluse spider venom is very poisonous but rarely causes a lot of damage because of the small quantity. One of the active enzymes in the venom causes significant damage to blood vessels and cell death to the tissue at the envenomation site. Also, the venom causes the patient's body to release inflammatory cells like interleukins, cytokines to help deal with the venom but these cells can cause harm to the patient once they activated; this results in red blood cell destruction (hemolysis), platelet destruction (thrombocytopenia), end-organ damage (kidney injury and coma).

Symptoms; Bites are usually painless initially; patients will start to feel a stinging sensation after about 3 hours.  Look out for redness around the site and fang marks. Most commonly, there will be a white blister formation that progresses to scarring and healing over a few weeks. Less commonly, one will see blue discoloration after the blister formation that progresses to necrosis and an ulcer formation. Patients may also experience nausea, vomiting, severe itching, and muscle pain.

Diagnosis: In the event of a spider bite, the best course is to see a doctor on the same day. If possible, bring the spider as this will help with a definitive diagnosis. Lab tests are not necessary if the patient only has skin complaints but if thee are systemic complaints like fever, headache, muscle pain the doctor may order a complete blood count, electrolyte panel, check coagulation studies, kidney function and urinalysis.

Treatment: Before presenting to the ED, the following are steps to take:

Additional treatment options include; tetanus immunization, antihistamines for itching, antibiotics if there are signs of infection, escalation of pain medications. There are no antivenoms available in the US. Some have suggested dapsone and systemic steroids, but there is little to no evidence they work, and these medications can have serious side effects.

Brown recluse spider bites typically only cause cutaneous findings that are localized but sometimes can progress to systemic injury and, rarely, death. Most of these patients will present to the emergency department where they will encounter an ER nurse and emergency medicine physician or physician assistant. The ER nurse will assist with lab draws and local wound care. If admission to the hospital is deemed unnecessary, the patient will need to be seen by their primary care physician over the next few days to monitor the wound progression. If there is an ulcer formation, the patient will eventually need to be evaluated by a general surgeon. If the patient develops systemic findings or lab abnormalities, it would be prudent to involve the toxicologist in the patient's care to render their recommendations. In the event of end-organ damage like acute kidney injury, a nephrologist will need to be involved in the patient's care. 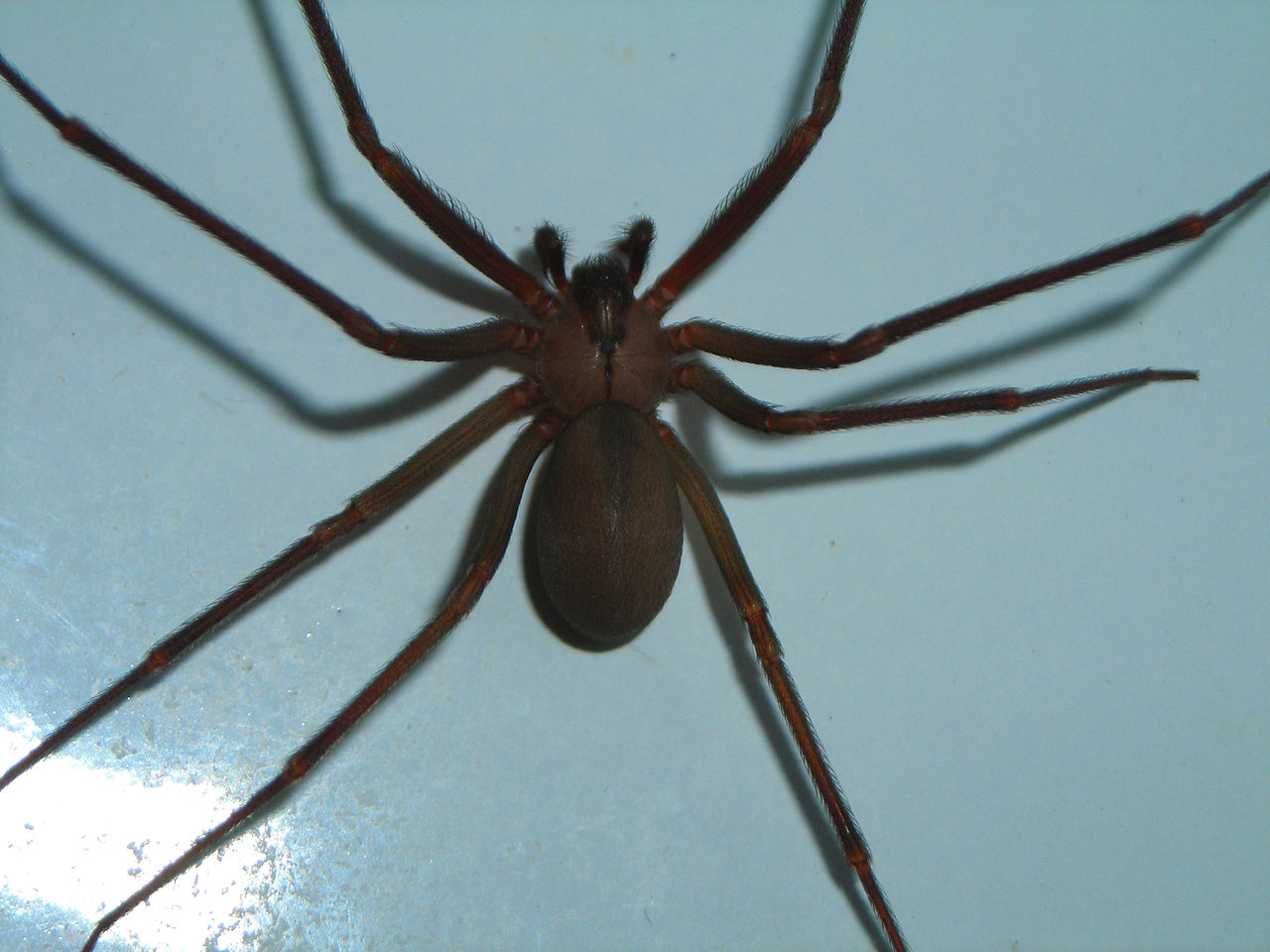